It always seems advantageous to know how others are faring with plants that we’re growing in our own gardens – or with plants that we might want to grow in the future. It gives us that much more information (from the other person’s experience) to add to our base of knowledge. That can, sometimes, give us just the edge we need to help us be even more successful in our garden.

This year has been one of the most unusual I’ve experienced over my 36 years in the garden.

Cold temperatures that stayed around a lot longer than we’re use to here in Virginia, caused the demise of several plantings. Losses included lettuce under the plastic tunnels, all my big rosemary plants, and most of the great ornamental grasses that were on the property lines in the back borders. Visually, the loss of the grasses was a real downer.

Although I did winter sow a few things in January, seed starting was later than usual for me. For example, I waited until April to start my peppers, tomatoes and eggplants.

Tomatoes are now looking great and growing like crazy, but they didn’t at first. It was just too cold for them and as usual they waited for conditions to their liking before growing. 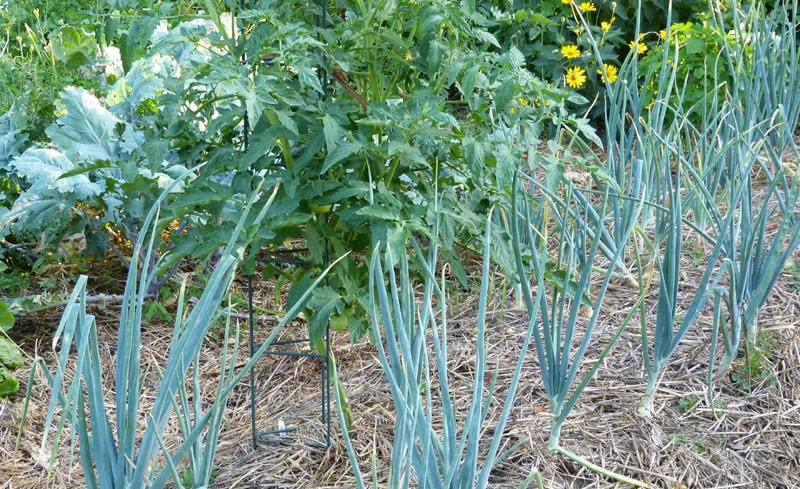 Peppers and eggplants are evidently still waiting, because they haven’t grown much at all since transplanting to the garden. Usually, when conditions suit them, they’ll start growing and end up at 5 and 6 feet tall with an abundance of fruit. I’ve never seen them wait this long, so I don’t know what to expect. 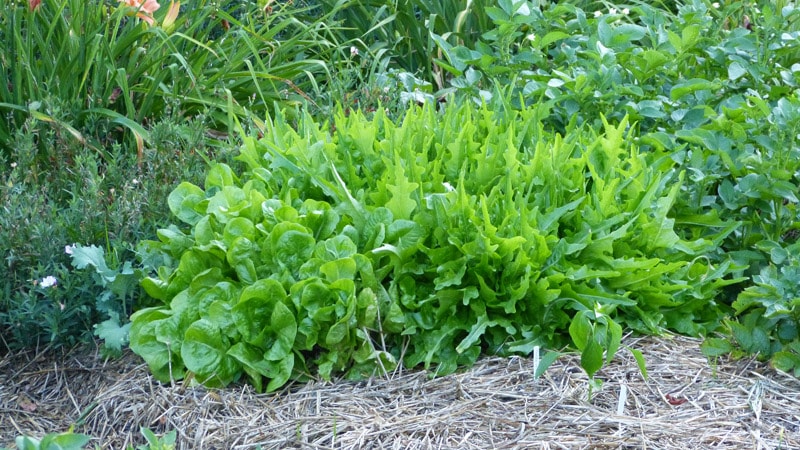 We’ve already had about 5 meals of potatoes. (Delicious! Nothing like potatoes from your own garden. They’re so good, that I won’t buy store bought potatoes, even in the winter.)

I had a good many potato beetles early in the season. Really surprised me, since I’d not had many for the past several years. After hand checking and killing for a about two weeks they disappeared and I’ve not been bothered with them since then.

July 1, 2014. Russian Kale, potatoes. In front is one stalk of lettuce and a magentaspreen volunteer that needs to come out.

Lettuce has been great. Numerous varieties. Have almost every stage of lettuce in the garden from bolting (the oldest) to fresh and new (the most recently planted). Still sweet. Have two containers of newly-germinated lettuce to transplant.  Will plant it in a shady spot and will water it in with rain water from my rain-barrels.

To my delight, the harlequin bug has not made an appearance yet. I have had those little worms that I think come from the white butterflies on the Russian Kale, but the damage has been insignificant.

Spinach was great, but long gone.
.
Beets took their time growing, but most are looking great. Added a new Italian heirloom beet to my varieties this year and really like it. It’s called Chioggia. Very sweet as well as beautiful. 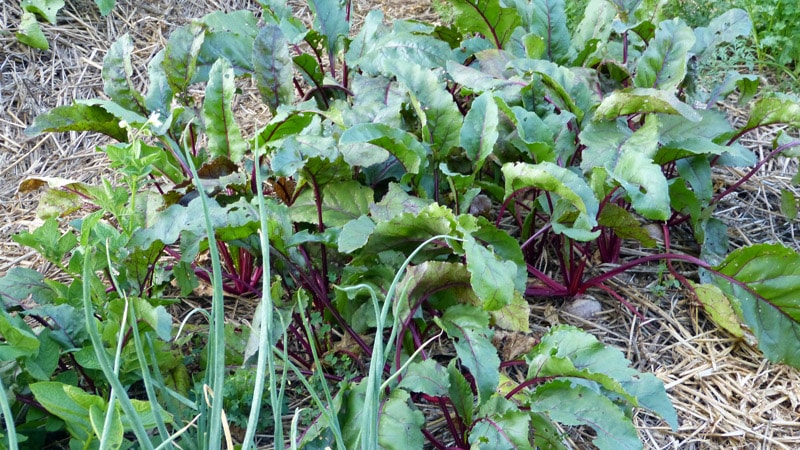 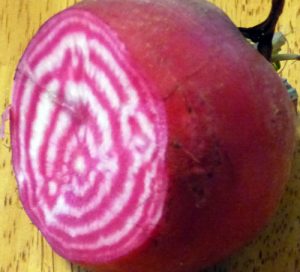 Planted several varieties of chard here and there throughout the garden. Still small, but I think it will do well by the fall. 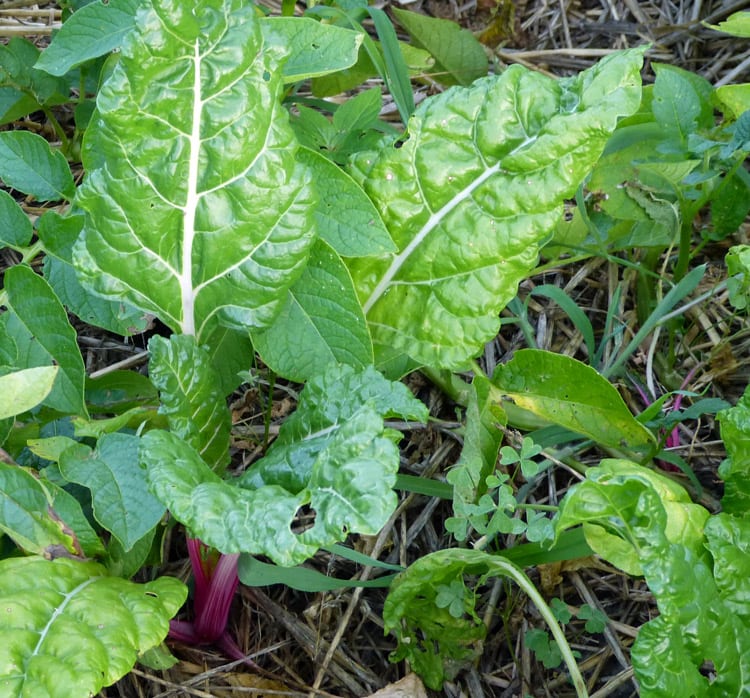 July 1, 2014. Young chard. Potato bed is to the left. Weed coming up by the chard (on the right) I didn’t see when Bill took the picture.

Had a beautiful and delicious chard (don’t know the variety) in the garden last fall that substituted for lettuce during the winter.  It’s seeding  now and I’m in hopes of saving some of the seed. Seed is still green, so I’m assuming it’s not yet ripe.

When asparagus started this spring we were starved for fresh vegetables. Had a fresh salad with fresh asparagus (sauteed in olive oil until tender) every night for almost 8 weeks.  (If you don’t depend on your garden for your meals, you may not relate to that.)

Long story short: our beautiful big asparagus have been reduced to smaller spears because of invasive roots from a forest of monster trees that was allowed to grow on a neighboring property in recent years. (It’s a long story for another time.) Bottom line is, since I don’t have room for another bed of asparagus, I’ve started growing it from seed in a spot here and there throughout the garden and throughout my borders. I like the results so far.

Had some spaces in my borders, mainly because of winter losses (the grasses), and took advantage of that space by planting cucurbits which I didn’t have room for in the garden. I planted more of that family than I usually do. (4 varieties of cukes, 2 varieties of butternut, melons, and yellow squash) Made an agreement with myself in advance that if the squash bugs showed up in numbers that I couldn’t handle, I’d pull up some of the plants. 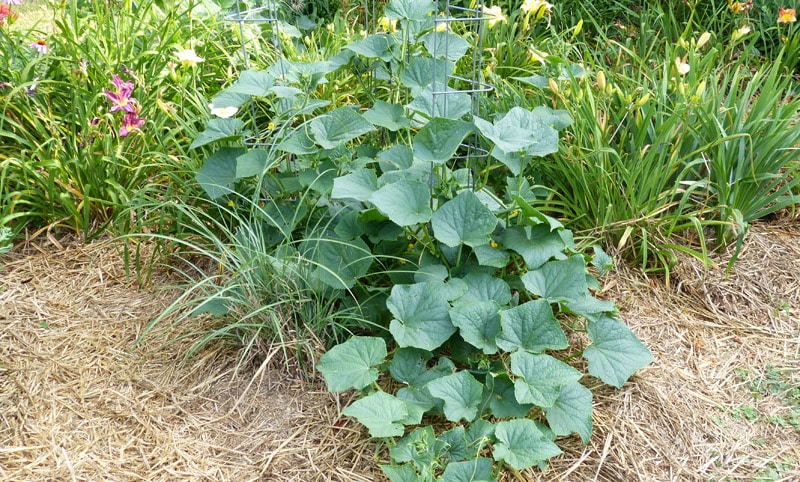 July 1, 2014. These cucumbers were planted where a large ornamental grass use to be. You can see I have replanted the grass which will take 3 years to mature. In the meantime, it’s a great spot for cukes.

I check at least once a day, if not twice. I’ve found squash bugs on most of the plants thus far, but not many. I can’t be sure of course, but I’m attributing their low numbers to non-too-hot temperatures and an adequate amount of rain. (Until this week anyway.)

If you’re a regular reader you know I’m not set up to water. Thus, my guess is: once the temperatures go to the hot and humid 90s and especially, if it doesn’t rain, the plants will become more stressed and that’ll signal more squash bugs. (If you don’t know how plants signal bugs please be patient please. I’ll write about that in detail when I have more time.)

We’re eating cucumbers and the vines are loaded with them. 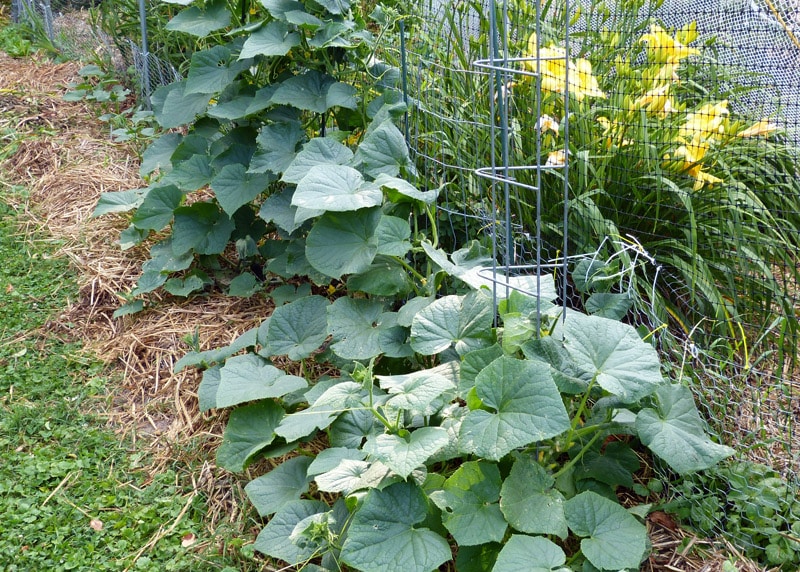 July 1, 2014. Another spot I like to take advantage of is the outside ends of my garden. The soil there is great. Last year I planted tomatoes here. 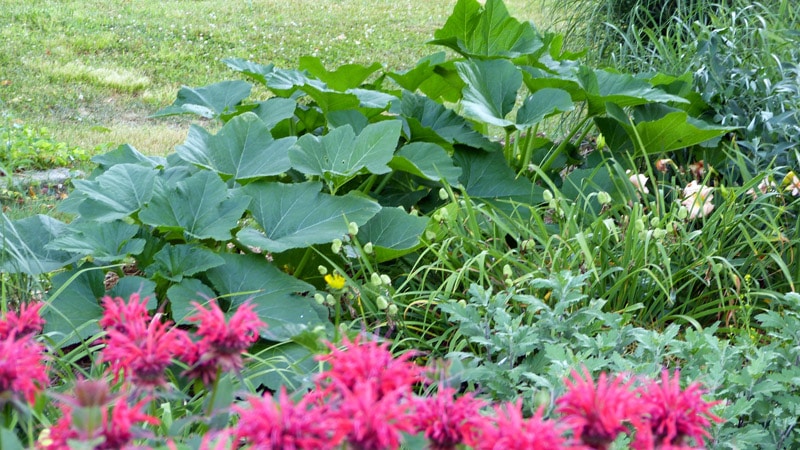 July 1, 2014. These yellow squash plants are in my border where I lost some ornamental grasses to the winter. They’re right on the property line. The red is Monarda (bee balm.)

Melons must not like conditions because they look sorta puny-looking to me. Time will tell.

Butternut looks fabulous.  I have several small baby butternuts on the plants about 4 inches long and I planted late. 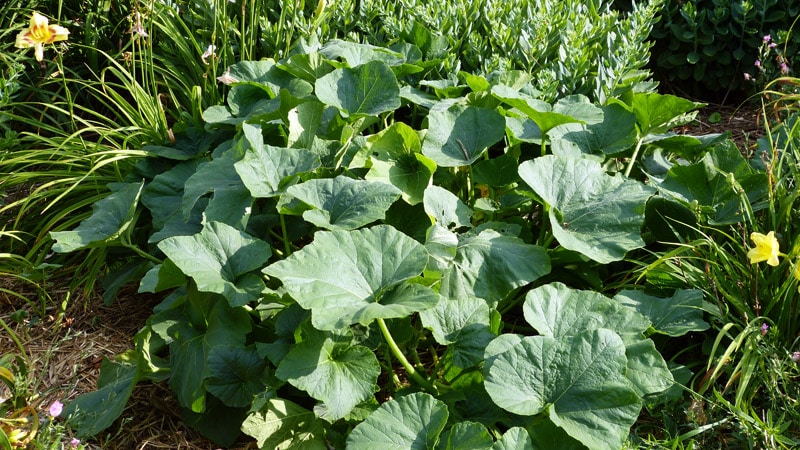 Strawberries were great! Not only were they abundant and delicious, but the plants hardly had any of that
leaf spot that appears when the crop is about finished. The plants have already renewed themselves after being cut back.

Our Sunshine blueberry bushes LOVED the cold winter. They’ve given us the nicest blueberries we’ve had in all the years they’ve produced for us. The new bushes, Chandlers, are doing great. The huge berries they produce cause Bill and I to act like a couple of kids when we check the bushes each day.

Blackberries are coming in and are bigger and more delicious than ever. I keep my blackberries in my fence border out front. They add to the beauty of the border and are convenient for snacking.

Most of the canes that were to bear a spring crop of raspberries were lost to the cold this winter. If we don’t have a long period without rain, we should get a nice fall crop.

The existing growth on the figs was lost to the cold (so we won’t get a crop of figs this year), but lots of new growth is coming out. That’ll bear figs next year, assuming the cold is not too severe this coming winter.

Neither did as well as I had hoped. Probably the “leanest” year I’ve had with onions in 35 years.

Garlic, I think, was in the wrong place. Anyway, it didn’t like it. Looked fabulous until June and then started to rot. Pulled it early and saved maybe 50% of it. It may not store well.  But we eat a lot of it and it’ll probably be gone with a several months.

Onions – not enough to suit me. (Most folks would be happy with the number I have, but we eat a lot more onions than most folks. )

I only have a gallon in the freezer to go into winter. Very poor germination again this year. I’m desperate enough to try again in the fall. The results of course will depend on the weather.

Just a few in the garden.  Will plant in August for a sweeter fall crop.

Planted earlier than usual in 5 spots. 4 spots nothing germinated. 1 spot had partial germination and am hoping for beans.

Planted again a while back. The bed of limas is looking excellent.  The other bed of bush beans is looking “iffy.” 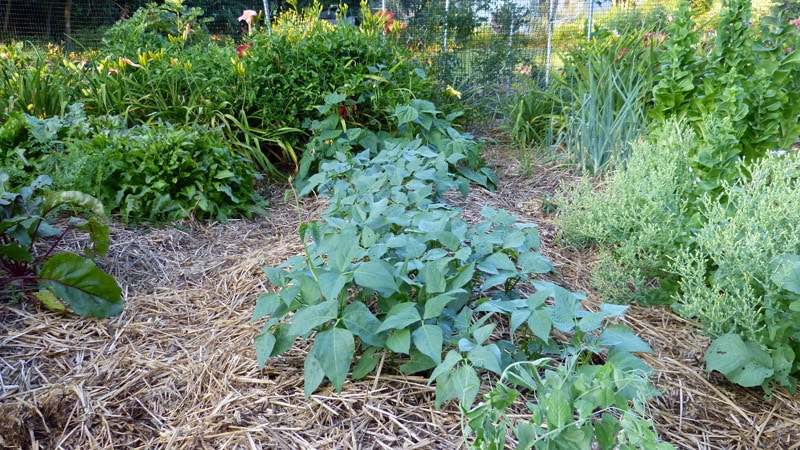 Enjoyed radishes for two months.  As of this week, they’re over until the fall crop.

Have parsley everywhere! I use a nice sized bunch everyday chopped in salads. (Parsley plants from last year are seeding.)

Cutting celery from last year is going to seed. Starts from this year are still small.

Sorrel – growing, but not as quickly as I’d like. (Sorrel from last year is seeding.)

Magentaspreen and Malabar – growing. They reseed every year.  I just keep one of each plant as backup in case I run out of other greens. Both are considered spinach substitutes.

Arugula. Lots of it. (I’ll tell you one of the ways I use it in the garden in a future post.)

Cultivated dandelion. Lots. (I’ll tell you an unusual use of it in the garden in a future post.)

I can hardly wait to have a simple potato salad with fresh dill. Nothing is like “fresh” dill! 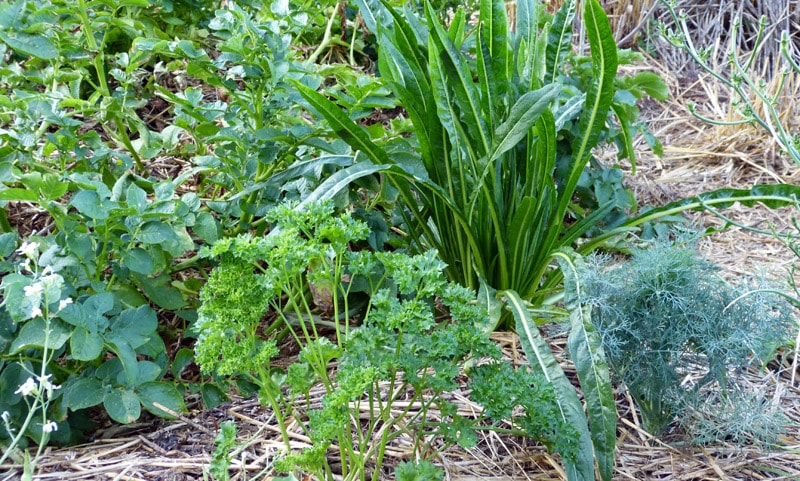 Basil is just about  everywhere and more is ready to transplant. (If you want an elegant and delicious appetizer that is quick to fix: Slice a fresh tomato. Puts cubed mozzarella cheese on top. Sprinkle with a handful of chopped fresh basil and drizzle with olive oil.)

I seeded borage all over the garden.  Finally, have it coming up.  You can use it for a cucumber flavor in salads.  But it’s particularly wonderful mixed with various greens, tossed with olive oil and then roasted. (After the greens are roasted, give them a couple of shots of balsamic vinegar.  Really delicious!)

How’s your garden?  I hope you’ll share your experiences in the comments section below.  I’d love to hear how you’re doing.

Wishing you great success in the months ahead! 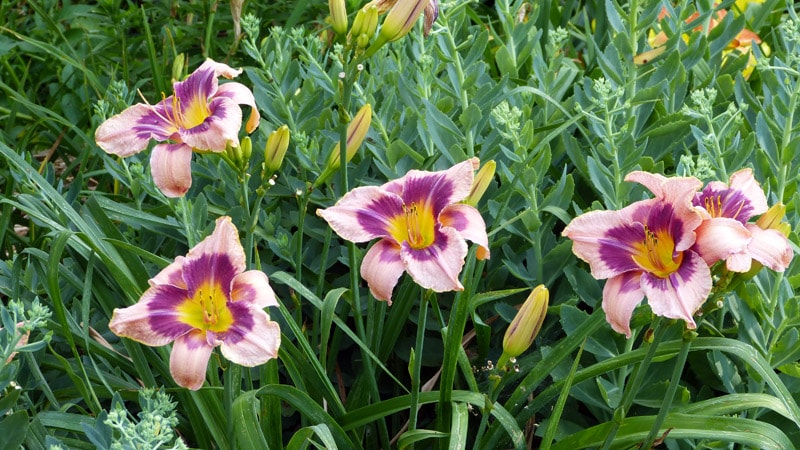 July 1, 2014. This doesn’t have a thing to do with garden vegetables, but these daylilies were so beautiful I wanted to end the post with them.

All content including photos are copyright by TendingMyGarden.com.  All Rights Reserved.