I see a lot of slightly varying definitions for winter sown.  Basically it’s considered an outdoor germination method.  Seeds are sown into containers that are covered but vented.  Then they’re left outside to germinate whenever nature says the time is right.

What I really love about this method is that you can adapt it to almost anything you want to do and at almost anytime you want to do it.  I would go so far as to say there is no absolute right or wrong way, because most of how you will go about winter sown will depend on what you want to accomplish.

For example, you can use the same idea for sowing seed of cold weather crops or warm weather crops but how you go about it may vary slightly. Variations will be dictated by your knowledge of the plants, the principles of nature, and what your goal is. If you don’t yet have knowledge of the plants or principles of nature, then your good common sense will guide you.  And even if you are not 100% successful, you’ve still gained invaluable first hand information about what you should and shouldn’t do.

Questions from a Reader

I received an email yesterday from Erica, a reader in Indiana.

Erica has been gardening about 6 years and reading TMG for two years.  She has 3 little boys who love eating cherry tomatoes off the plants and feels sure that her kindergartener is the only one at “school” with a bowl of cherry tomatoes in his lunch every day when the tomatoes are in season.

She told me she almost always gardens in the spirit of experimenting. (What a great approach!  Because – when it comes right down to it, no matter how much we know or how long we’ve gardened, nature can always throw us a surprise ball.)

She wrote:
This is my first year of trying winter sowing. I am excited to already have some starts here in Indiana.

Is that too warm to leave the milk jug tops on? or should I just move them to the north side of the house and leave them in the shade until it gets back to regular April temperatures?  I would hate to roast the little things!

She also wrote: “…even though I didn’t do it exactly right… I planted (even the warm weather crops) into milk jugs in Jan/Feb and set them straight outside snow and freeze and all. I didn’t keep them inside until they sprouted (germinated). I love letting them decide when they are ready.”

After a bit more questioning, I learned that Erica had sown and now has seedlings of lettuce, broccoli, cabbage, sunflowers, poppies, dill, oregano and even a tomato!

Not surprisingly, the peppers, cilantro, celery, zinnia,  and holly hocks have not germinated. (Just too cold for them right now.)

She also had winter sown some peas and reports that they got moldy.

Peas don’t like to stay in cold damp ground a long time.  They tend to rot and of course, the mold is a step in that direction.

Peas are best direct sown in the spring, when the ground is or will warm soon.

Some gardeners like to soak the seed, roll in a paper towel, and presprout before planting.  I’ve done that and based on my experiences consider it pretty much a waste of time for me. Even my presprouted peas stay in the ground and don’t tend to show themselves anymore quickly than ones planted unsprouted.

Regarding Erica’s statement – “even though I didn’t do it exactly right” :

I think she did it just fine, because her purpose in the spirit of experimenting was to get seedlings earlier than what she would otherwise.  She accomplished that.  She also learned what crops will germinate earlier and what crops need warmer weather.

Although the jugs are vented, it could possibly get a bit hot inside when temperatures outside go to 74 or 81, especially when or if the jugs are in direct sunlight.

I’ve had winter sown crops stay in closed up jugs (caps off, of course) through warm temperatures and be just fine.  So it’s possible for the plants to go either way.

There are so many variables in situations like this that you almost have to just make a call based on every variable you know and your gut feeling and go with it.

I’ve written in detail about my variation of winter sown for starting warm weather crops. You may find it helpful to review it.

This year, because of the cool spring I sowed my tomato, pepper and eggplant seed in jugs on April 1, at bit later than usual. (I did not tape the jug halves together, but left them untaped.)

I was pressed for room on top of my washing machine (that’s where I put them to germinate) and we had a couple of warm days so I decided to mix things up a bit.

The Principles Behind the Decision

Everything needs air circulation.  Even when we sow in December, we leave the caps off the jugs so that air can get inside.  As temperatures warm we need more air in most cases. 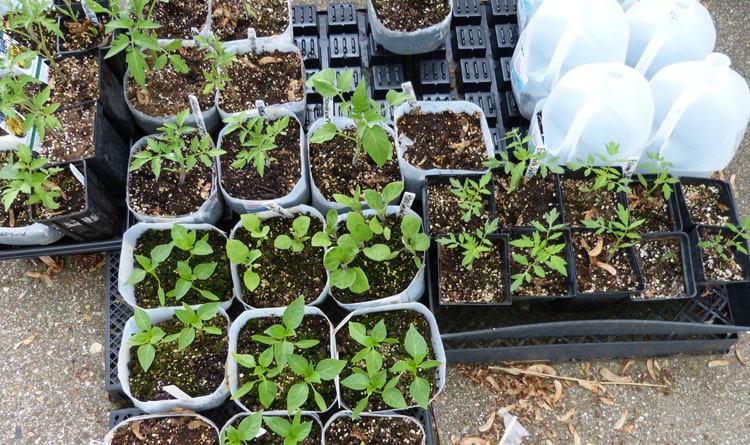 All grown with a variation of the winter sown method.  (2012) Jugs at top right have tops attached, but are loose rather than taped.  Seed has not germinated in those jugs. (Caps always are off.)

Probably the most prevalent cause of damping off of seedlings is lack of air circulation. The other is over watering. (Damping off is the collapse and death of young seedlings as a result of a fungal infection.)

In all the years I’ve grown from seed, I’ve never experienced damping off of any seedlings.  And I never want to.  So I try to make sure that after germination of warm weather crops in particular, I give them plenty of air and plenty of sunlight.  Removing the tops insures they’ll get air.  Putting them outside insures they’ll get sun.  And the extra bonus is, they’re hardened off just about from day one.

Of course, I would not put tomato (or pepper or eggplant) seedlings  out without protection of the jug top and/or the coldframe if the wind is blowing like crazy or if the temperatures drop into the low 40s or below.  That would be way too stressful for those little seedlings. Even older tomato plants don’t like temperature in the 40s. They’ll live, they just don’t like it and will show you in one way or the other: decreased vigor or leaves turning purple.

Even my beets, lettuces, various green, onions, leeks, turnips that I started via winter sown, now have the tops of the jugs on – but loose. The only reason I’ve not taken them off completely is because we’re due for another cold snap with temperatures in the low 30s.  They could live through that easily, but  I’m still leaving the tops on until that’s past.

A Best Guess for Erica

I don’t know enough about Erica’s situation and the variables that exist there to tell her what to do, but my best guess would lean towards giving them more air in the warm temperatures by loosening the tops. (Her inner sense told her that already, which is why she asked the question.)

You can take the winter sown method and use it in so many ways.  I’m so pleased with the initiative that Erica took to see what she could do to get a start on spring planting.  That’s the attitude we all need as gardeners.

There are lots of different ways to do things.  But always keeping Nature’s principles in mind will always get you the best results.

Consider air circulation and sunlight in every aspect of your gardening.

Wintersown-Answer to questions about seeds and transplanting

You Can Plant in December

Looking at Winter Sown Seedling and the Garden

Winter Sown – Another Plus

Seed Starting – It’s Easy Even with Less than Perfect Conditions

All content including photos are copyrighted by TendingMyGarden.com.  All Rights Reserved.