This post was inspired by a reader of my site who has recently invested some time in preparing a new garden bed.  Her sister-in-law is doing the same and they had a question regarding a recommendation I made in the second part of the post Soil Preparation – 1st Key to Soil Improvement.

In preparing a new bed I advised adding about 3 feet to each side of the area designated for the bed and dig that at the same time you dig the bed.  The soil from the path area would be thrown up on the bed leaving the paths much lower than the bed.  I then recommended mulching the paths as well as the bed.

(Picture below shows my new roll of straw.  I try to keep one on hand all the time.) 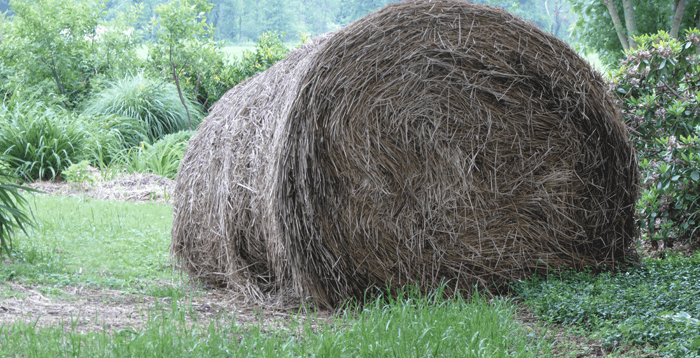 My reader writes:
“My sister-in law was wondering —and I got stumped a bit— as to why it is important to mulch the paths.  ———I guessed that since you use the path dirt to raise the bed, old weed seeds get exposed.  Mulching the paths helps keep the weeds down and keeps them from seeding into your beds.—”

She’s correct of course.  When you dig up ground —– buried weed seeds are exposed and therefore can germinate. Mulching the paths keeps the weeds down and/or controllable.

The nearer weeds grow to your garden beds the greater the chance they’ll re-seed in your bed.  Even if you’re diligent in removing them ——life is life —–and in all probability sooner or later you are going to have some weeds grow and go to seed in your beds.  Much less chance of this happening with mulch on the paths.

There are other important reasons to mulch your paths.

Before giving those additional reasons I must say I think these reasons and their importance is best understood from experience.  As a new gardener you can read what to do but not fully appreciate what is being said until you have some  of the “doing” under your belt.  Nonetheless, sometimes knowing the reasons behind a recommendation creates more of an incentive to follow it.

One of the greatest benefits to mulching paths is that it makes sure the space designated as your bed — stays your bed — and allows it to perform the task that you are preparing it to perform. (Which is to give your plants the best possible conditions in which to grow.) To elaborate:

I shudder to think what a mess I would have if I did not mulch between all these garden beds, shown below. 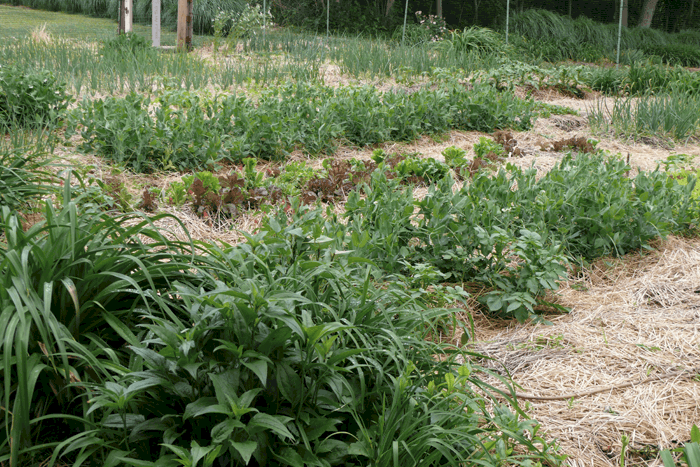 Top part of my Garden in May

In the picture below, the beds almost look level with the paths because of the heavy mulch in the paths. 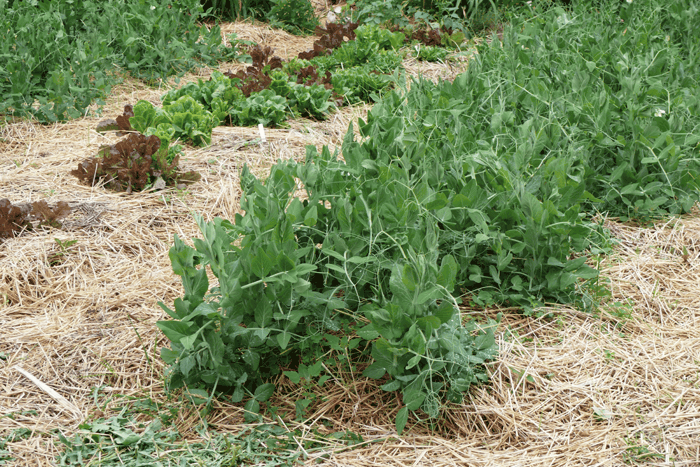 A few hours after her original email, my reader emailed me again.

She writes: “I thought about another reason for mulching paths:  Since you put your scraps in them along with the decaying straw, it seems that the paths would provide a nice source of organic matter for the beds —–.”

I’ve also mentioned in prior posts that I no longer make compost with my kitchen scraps, etc.  Just another job I don’t need. In the winter when my garden is “closed”,  I dig my kitchen scraps into the empty beds.  When all the beds are occupied in the spring I can’t do that because soil organisms use nitrogen to break down the organic material and since they get first nibs on the nitrogen, the plants would be cut short of this necessary ingredient for their growth.

Not a problem for me — I just put the scraps under the straw in my paths.  It breaks down quickly in the summer and I have an even greater reserve of organic matter in every path.

All these reasons work together to save you time on garden chores you’ll never have to do!

As you continue to add new beds parallel to your first and finally complete all the garden you need, the reasons set forth here will be magnified in their importance to you. As you get to know your soil and experience first hand how your garden works, you’ll more fully appreciate mulching your paths.

Thank you for allowing me to help you with one of the most wonderful of life’s joys —-a sustainable garden.