I made a horrible mistake about the year 2000, although it did not seem like a mistake at the time.

As you may already know, my husband is an artist.  We were getting ready to release one of the most popular things he has ever done – his Chesapeake Bay Watermen’s Print.

It had already been unveiled, but we were taking orders for the print and remarques (an original pencil drawing on the print) before its release.  The amount of work involved was staggering.  Because of this workload, I naturally did not want to do anything that did not have to be done.

During lettuce season each year, picking lettuce for the day’s meals is an every morning task.

Since the beginning of gardening in 1980 I had made it a habit to pull a few weeds while picking lettuce. It always took about 10 to 15 minutes to pick the lettuce and I did at least 5 minutes of weed pulling.

But this particular year, by the time I finished picking  lettuce I was so overwhelmed from thinking about the amount of work I knew I had to accomplish that day, I was too “antsy” to pull the few weeds that had come up where the straw had been thinly applied. (Nor did I exercise any self-discipline to make myself do it.)

I’m sure you have guessed the end of the story.  Those little weeds here and there got to be big weeds every where.  By the time I noticed I was horrified because now it was going to be a major JOB!  After the print was released and I finally got to the “weeding job” I had created for myself, I knew then and there I never wanted it again.

Constant dripping of water can indeed wear away stone, and 5 to 10 minutes of weeding as you walk by each day can keep an enormous amount of garden and borders almost free of weeds.

Picture below: The little weeds coming up at the bottom of the picture in the bed with peas are easy to pull up at this stage.

Its a lot easier to pull a dozen or so weeds like these coming up beside the peas,  than it is to let them grow into a nightmare. 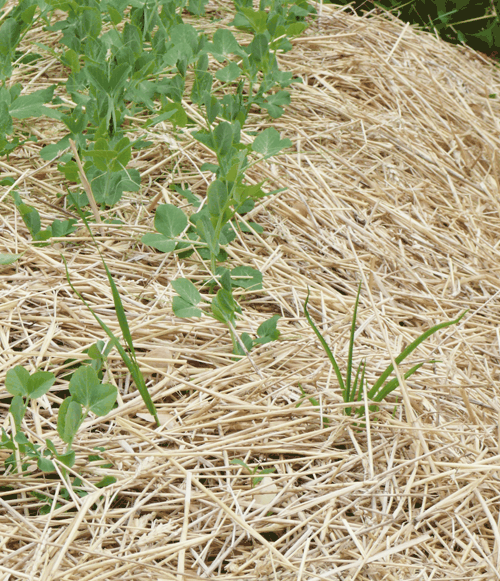