As I detailed in my post on Yaku-Jima-Japanese- Silver-Grass, it’s just about the most beautiful and carefree of the ornamental grasses. It adds charm to the landscape in all seasons and is never invasive.

I’m now in the process of cutting them back. I do a few each day, so I won’t have to “make it a job”.

To keep these grasses looking their best, it’s best to cut the old growth before new growth begins in the spring. 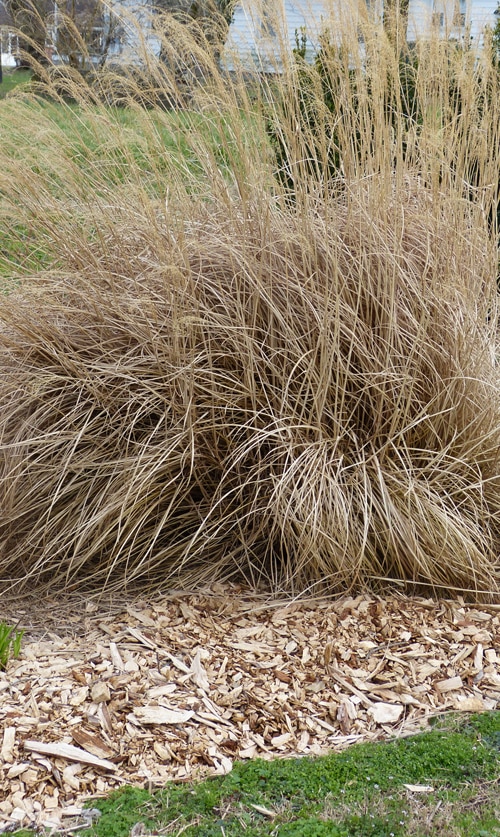 Another bonus of this grass is that the blades of grass are soft. They won’t cut you like many of the ornamentals do.

Use to Hate This Job

I didn’t realize it then, but it was because I was using the wrong tool. You’re probably wondering why it took me a couple of decades to get the right tool.

Most of the tools we worked with for years were tools we inherited from the previous owner of the property where we first gardened. Most were of poor quality.

For more than two decades we hardly made enough to survive (as detailed for you here) much less buy new hedge shears. There was no use in even complaining, because it was either use what we had or the job didn’t get done.

After many years of establishing this mind set, it never occurred to me that I needed anything any different than the tool I had, even when we were making enough to buy new shears. The ones I had weren’t broken, so why would I need a new tool?

I just happen to read something one day (I don’t even remember what it was) that caused me to have an ah-ah moment about using the best tool for the job. Then I researched hedge shears.

After reading specs and reviews on many, I decided on the Japanese made HS-KR1000  hedge shears which are used by many professionals and botanical garden staffs.

They’re made to cut soft plant stems like new growth on hedges, ornamental grasses and various other perennials with soft stems. 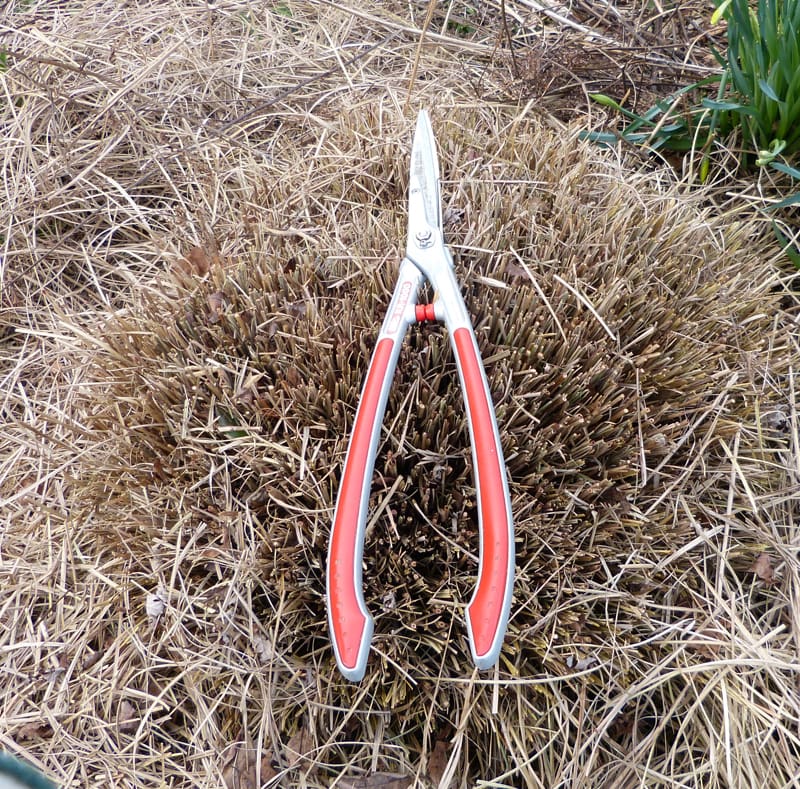 HS-KR1000 resting on top of the grass I just finished cutting.

One of the Sharpest Landscape Tools

The steel from which they’re made is superior and is treated to stay sharp for a long time. I’ve had mine several years. They still cut as when they were new and I’ve never sharpened them.

One of the reviewers on Amazon, said that he’d been using the same blades for 20 years! Once a year he gives the blades a “quick touch up” (sharpens) with a water stone K1200 grit. (Blades can easily be removed to sharpen.)

ARS is a Japanese company that is known for the sharpest landscape tools that with proper use and care will stay that way, at least for a very long time.

The blades are replaceable if need be.

After each use dry the blades and clean (if dirty). Then lightly oil the steel. This prevents rust and helps keep the blades sharp and the shears looking brand new.

Handles are about twice a long as the 7″ blades. (Means less stretching for you and me.)

And they’re all one piece so they won’t break or come off.

If you’ve cut for an hour or more with almost any of the inexpensive hedge shears you know how tiring it can be to your shoulders and back.

These ARS made shears are light weight (1.7 pounds) and designed for perfect balance and optimum comfort. This allows you to cut for longer periods of time without tiring.

The tool is made to take the “force” of cutting which means less stress to your arms.

I love how one Amazon reviewer put it: “allows an hour long chopping session without gobbling a whole bottle of vitamins when you’re finished.”

Not only is the quality and design of this tool superior, but its performance is superior.

As a result shrubs like boxwood will look more manicured than “hacked at”, which is the look that often results when power tools are used.

Friend and reader, Julie, in Utah wrote to me after buying and using one of the Silky pocket saws I highly recommended in a post.

She had been trimming (rose bushes) with an electric trimmer and was surprised to find this little Silky hand saw much easier to use. And that’s almost exactly what one of the reviewers said about these shears:
they were much easier to use than his electric hedge trimmer.

These excellent hand tools (the Silky Pocket Saw and ARS HS-KR1000 hedge shears) make jobs so easy that there’s really no reason to use a power tool.

Safety –
The blades and the points on these shears are extremely sharp. When I walk with them I have the blades closed and the pointy edge facing the ground. If I were to fall, I want those points to go into the ground, not into me.

Check to Get the Best Price

Check around to make sure you get the best price. Even on Amazon, several sellers offer these.

With any product, no matter how good, you can end up with one that’s defective. Check the return policy before you place an order to be sure you can get a replacement or your money back.

Try Them Out Right Away

It’s a good idea to give the shears a test run as soon as you get them so you’ll know they’re ok in case there’s a time limit on returns.

A couple of reviewers reported that the shears lost the fantastic cutting ability after a brief use. I couldn’t help but wonder if this was due to improper use of the shears.

These shears are made to cut soft plant stems like ornamental grasses, other soft stem perennials, and new growth on hedges (as opposed to woody stems deep into the bush).

Trying to cut woody stems that are work for loppers can dull blades.

It can take a bit of practice to learn what the tool will and won’t do.

#1 – When my ornamental grasses are dry these shears will made quick work of them. If I try to cut after a rain, it sometimes grabs the grass without cutting, especially at the thick base. 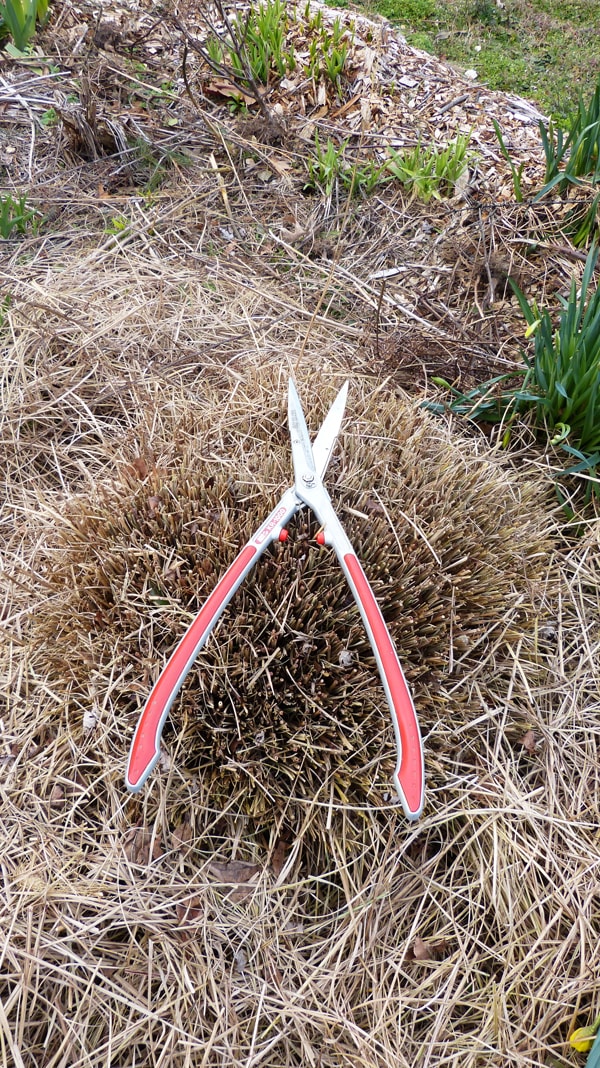 Shears opened so you can see.

#3 – There are times I have to change my angle of approach to have the shears cut properly. I wish I could explain that more clearly, but I don’t know the technical part of it. More than likely a professional landscaper or someone who works for a botanical garden could offer a much better explanation.

Compared to the inexpensive shears available at big box stores (and online), these ARS HS-KR1000 shears are on the high end in price.

But if you want a tool that should last a lifetime and makes garden trimming and clean up much easier with its almost effortless cut quality, you’ll want to consider these.

All content including photos are copyrighted by TendingMyGarden.com. All Rights Reserved.