Keeping tomatoes and peppers 8 to 10 weeks past the first few frosts and freeze is important for me since I depend on my garden for most of what I eat.  The only organic vegetables I buy at the grocery store are cabbage and carrots since I’ve not yet grown enough to take me through the winter.

Covering to Keep 8 to 10 Weeks Past Frost/Freeze

Having so much variety during the growing season – most especially tomatoes and peppers make everything else taste better. Thus, long about October when the first frost or freeze is expected I start covering the most prolific or best looking of those plants to extend the season as long as possible.

I use remay (row cover cloth) and secure with  good quality clothespins. (The cheap ones fall apart.)

I’m usually eating peppers and tomatoes two months or more after the first frosts and freeze.

We had a few frosts and a freeze in October and everything covered was fine. 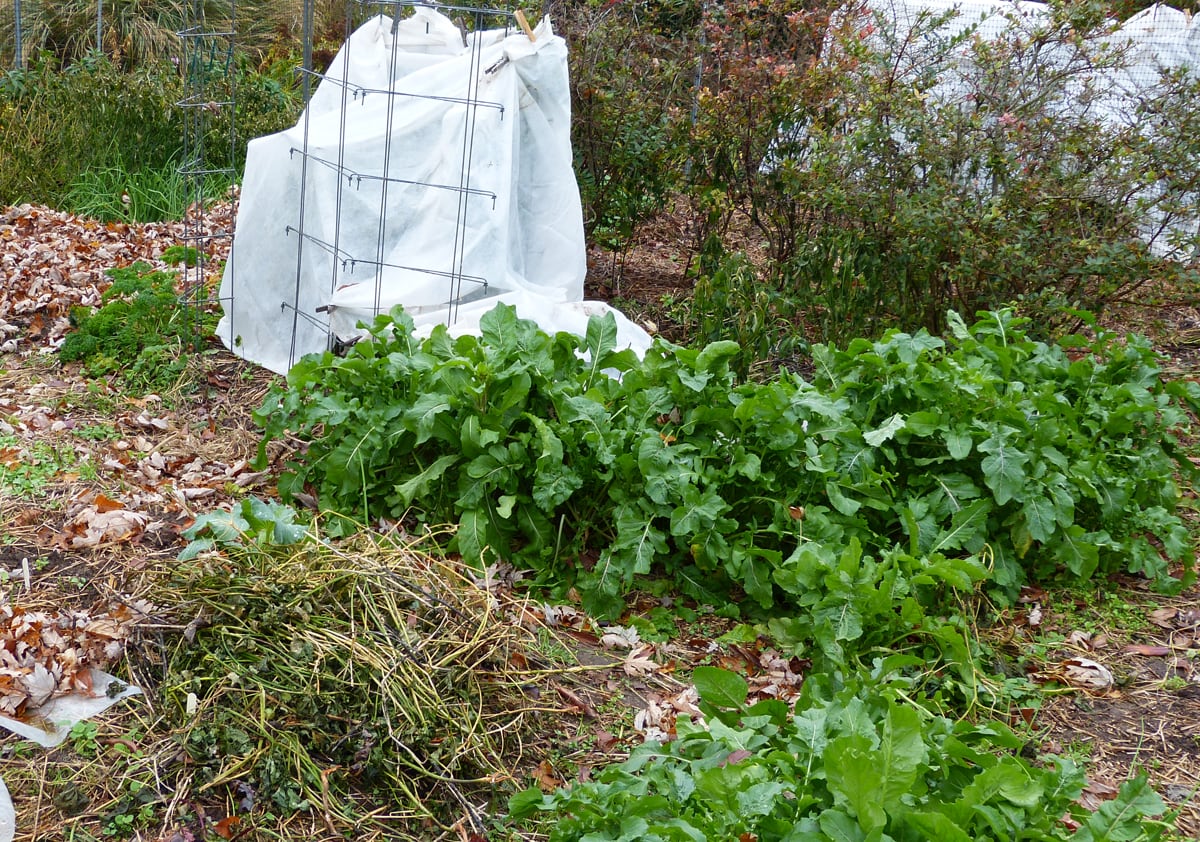 This is one of the pepper plants I covered. The lush green is arugula.

At the end of October I harvested a lot from the covered plants. Even then the plants were still loaded with fruit.

As expected November temperatures were colder. Plants under covers were fine and fruit was pristine. 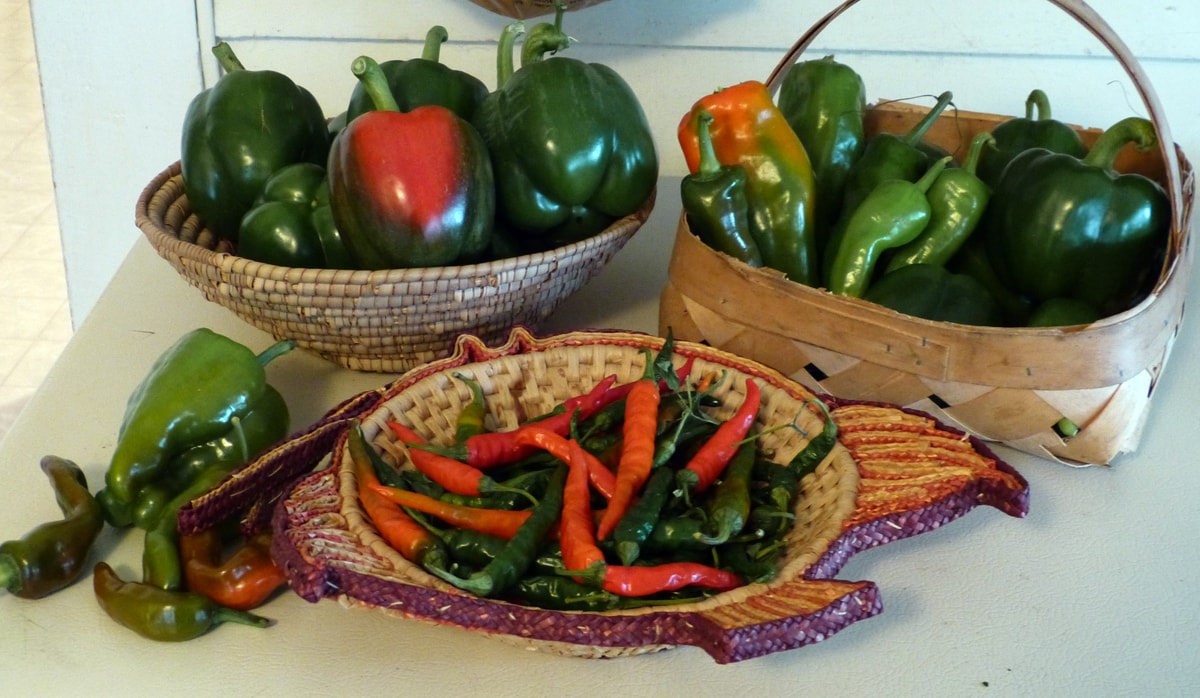 Some of the peppers harvested on Nov. 22

Below shows  plants at the lower end of my garden on the outside of the fence.  In the middle is a tomato plant that I didn’t have time to cover. The white you see among the vines is a scrap piece of garden cloth that I quickly wrapped around a few tomatoes just to see if it would protect them.  A couple were ok.  As you can see the frost killed the foliage. 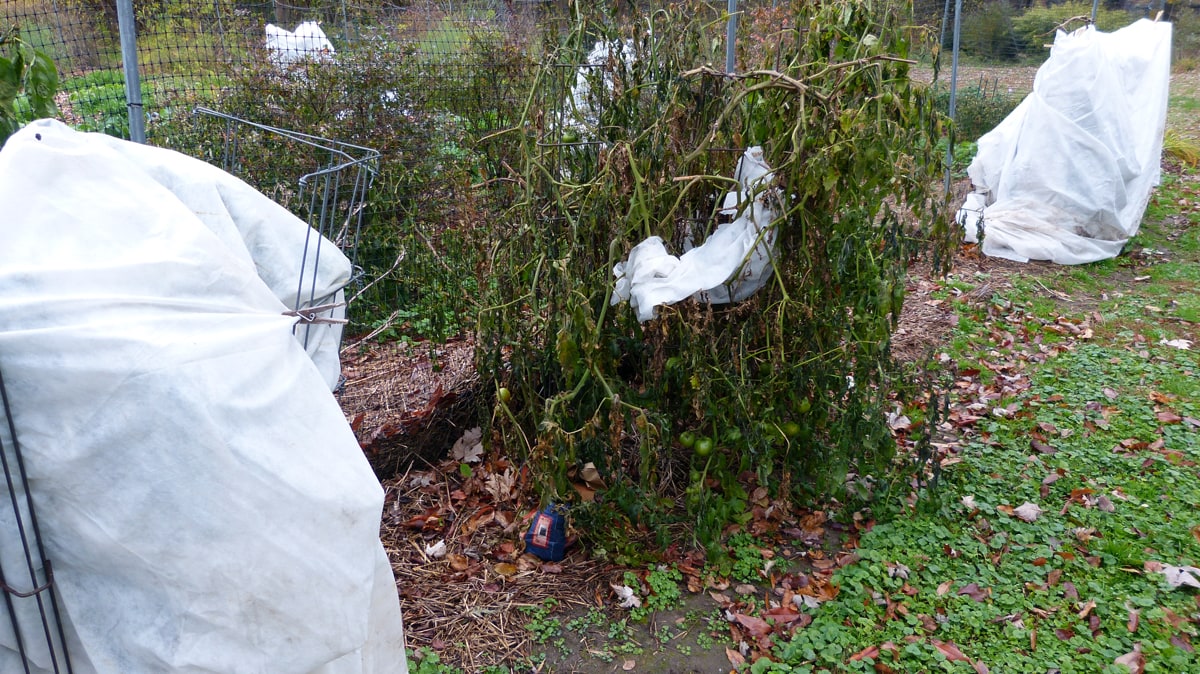 Picture was taken November 22. In the left corner is a covered pepper plant.  Top right is another covered tomato plant. 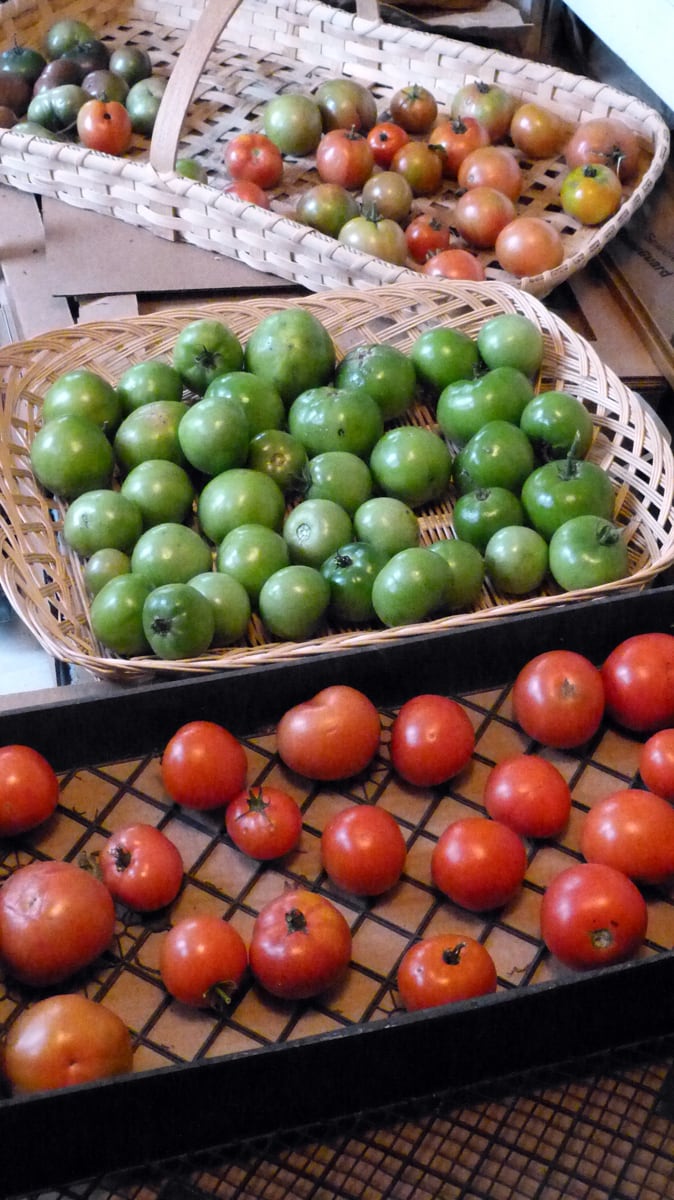 These are some of  the tomatoes on my mud-room/porch on Nov. 22.  The green tomatoes were harvested that day.

Last spring I found a spot in one of my flower borders (that I’m closing down) that seemed perfect for a tomato plant. And it was.

Not only was it great looking, but was THE most prolific tomato plant I had.  It produced well over 200 tomatoes. AND when I harvested  for the last time on November 28th it still had over 100 tomatoes.  I only harvested the 80 that were a larger size.

Below is what the plant looked like on October 16. 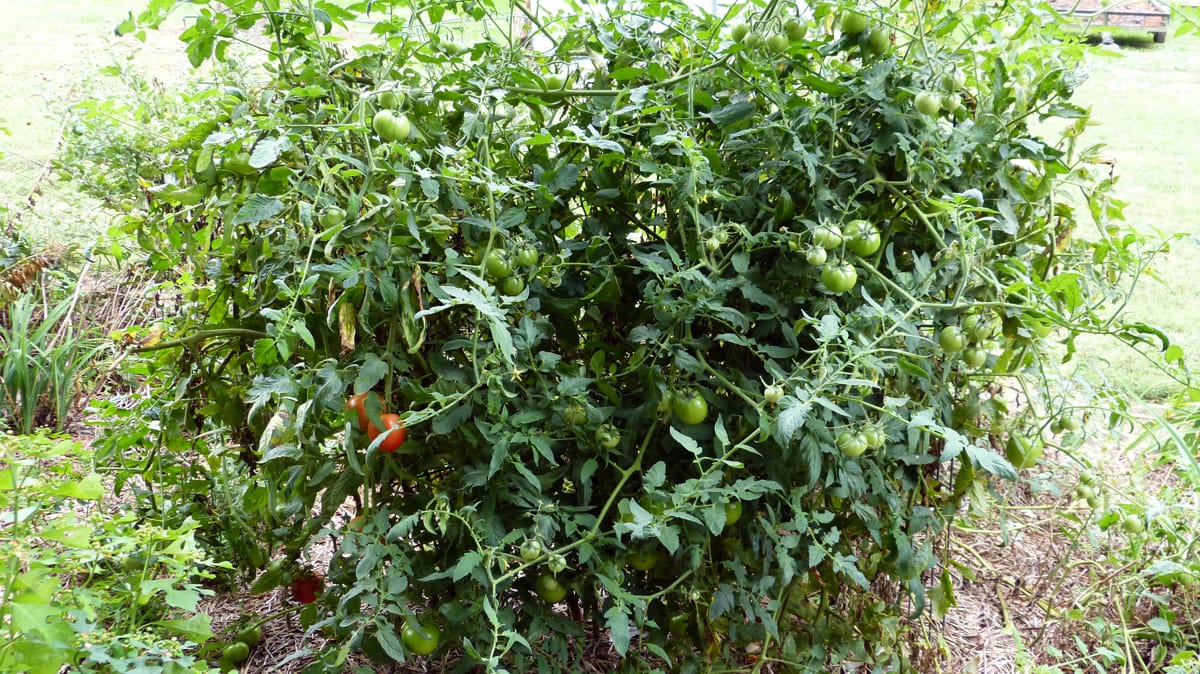 This was what the plant looked like on October 16.

The tree barrier behind the plant and the tarp provided more protection from the freeze than other covered plants. Thus, these tomatoes were the last to be harvested. (November 28) 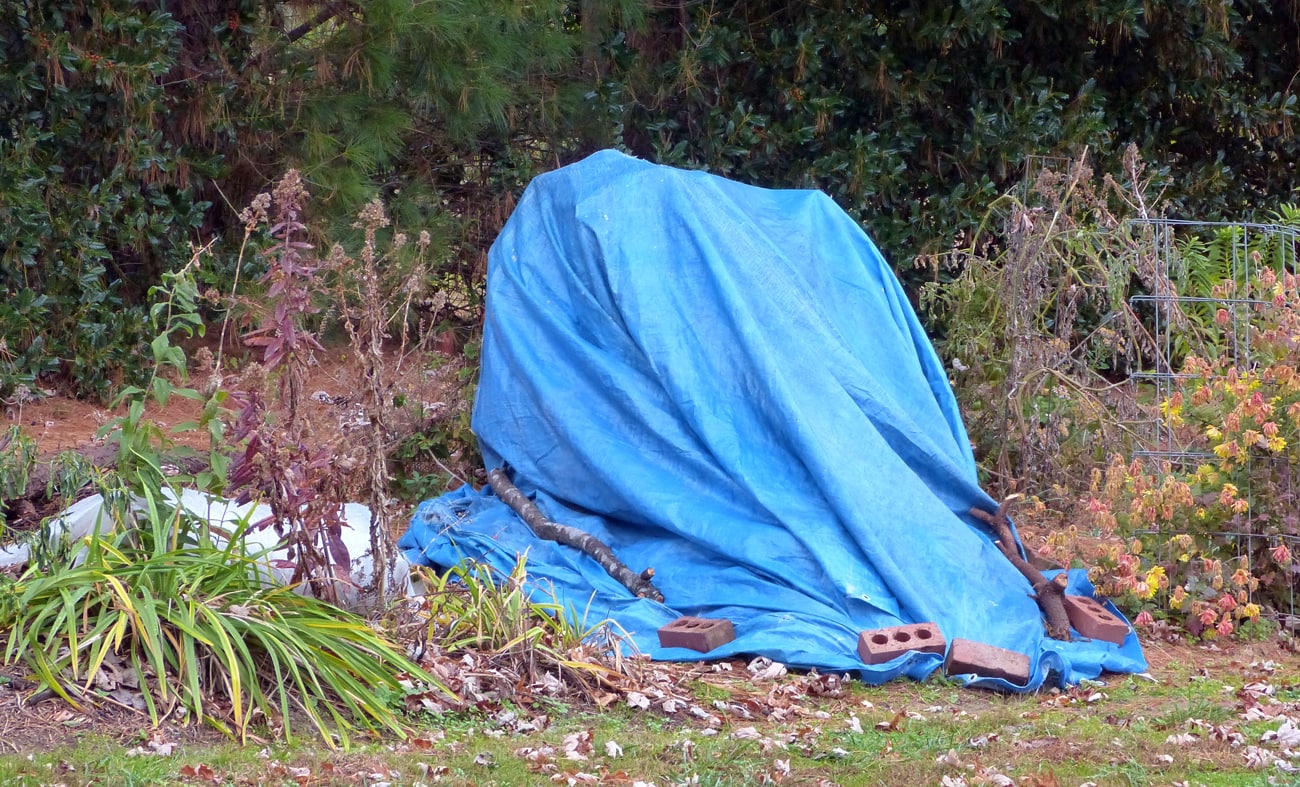 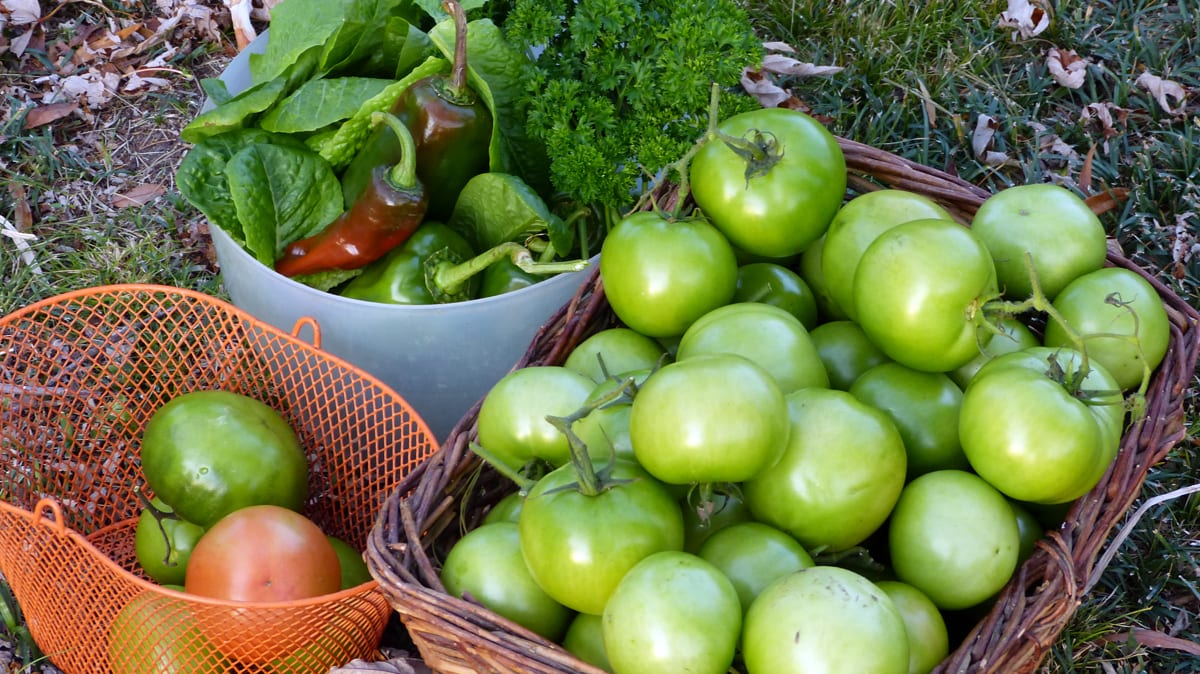 These are the tomatoes I harvested from the tarp covered plant on November 28.  In spite of several freezes, all were in perfect condition.  Also shown are peppers, lettuce, and parsley harvested the 28th.

This year I ate my last fresh pepper at the end of December.  Ate the last fresh tomato on Monday (Jan 17).

addendum: (Note that I previously had typed Dec] which was incorrect and am just seeing the error – and corrected to January.)

My only regret is that I left so many peppers and tomatoes on the vine due to time constraints the day of the last harvest (Nov28)  Otherwise I’m sure I would have had peppers through mid January and tomatoes until the end of January. 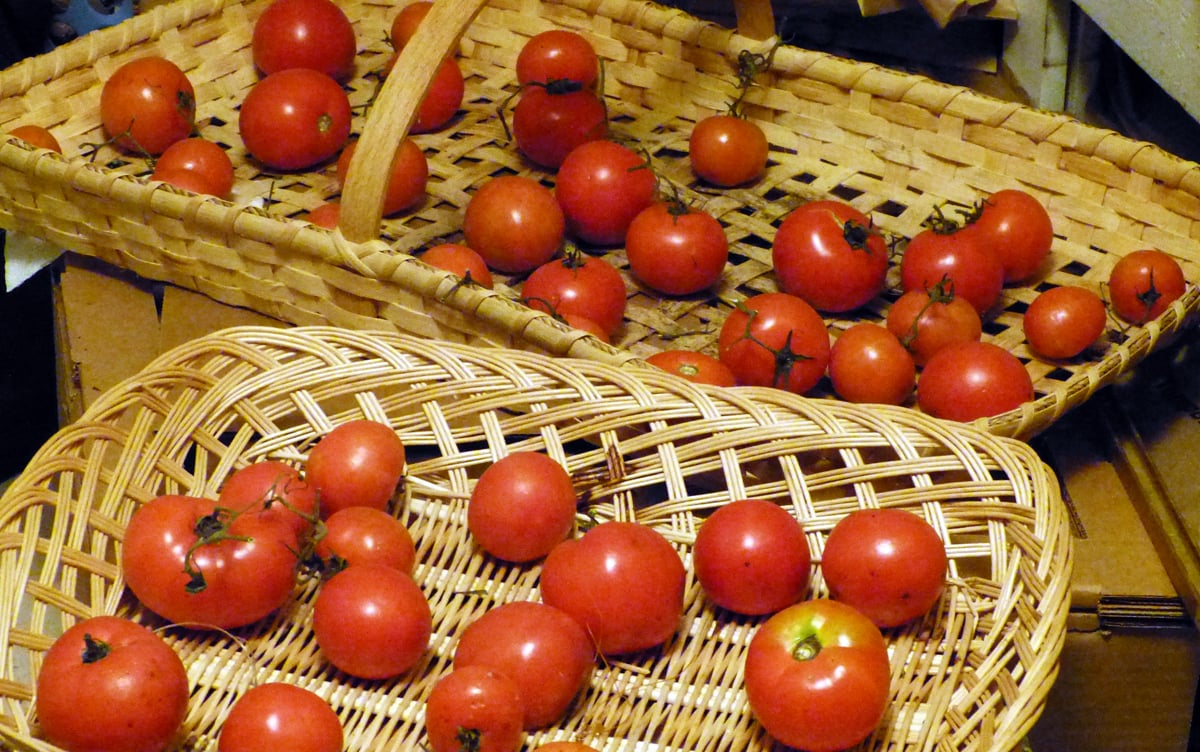 This picture shows the fresh tomatoes I had remaining on Dec. 28. These were the tomatoes harvested green on Nov. 28.

Tomatoes keep a long time with good air circulation (24/7) and cool temperatures.  When the weather cooperates and my mud-room/porch stays at 55ºF  that’s close to perfect.  I still run a small fan.

Most of the time the temperature is closer to 60º F  even when in the house it might be 56ºF.

I open the door during the day to let outside air circulate even if outside temperatures are in the upper 30s or 40s.  The morning sun comes in and that also helps a lot.

If temperatures outside cause temperatures in the storage area to start inching above 60ºF, tomatoes will quickly deteriorate.  When you suddenly notice spots forming on the tomatoes, that’s what’s happening. This was the case for two days during December this year.  I was thrilled temperatures dropped again the third day.  (This might change in areas with drier air <like out West>).

I check the tomatoes everyday.  If I see a small spot has appeared on one, I use that one first.

Refrigerating tomatoes kills the flavor. (And yes, I realize some people still like them that way. I don’t.)

Having fresh tomatoes for use in December and January as winter gets into full swing is part of getting the most from your garden without much effort.

If you haven’t already, give it try.

If you do this already and have tips you think would be helpful, please comment and let me know.

And by the way, I apologize for not replying to the comments you left on the last few posts.  I still plan to do a post especially to answer those great comments.  To me, your comments are the best part of writing. Sorta like dessert.😊 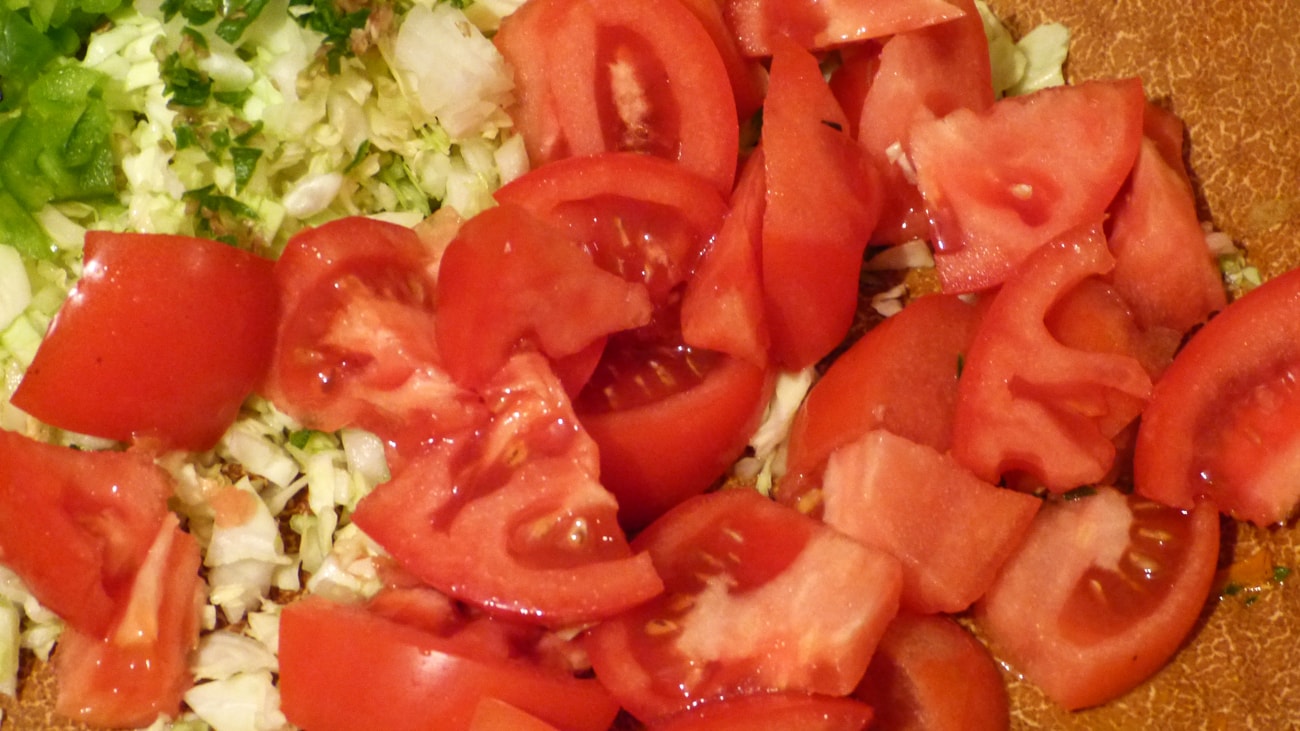 I chop all my vegetables and then cut the tomatoes.  Add oil and vinegar and salt and pepper and toss.