I spent yesterday and today  trying to do whatever I could to prepare for several days of wind and rain from the storm Sandy.  You may have done the same.

I made bread, soup, strawberry muffins, and several other things so I can put meals together when the electricity goes out.  Filled buckets of water. Cleaned the house.  Don’t know what good that will do — but as silly as it sounds it made me feel more prepared.  🙂

Yesterday, I harvested close to 300 tomatoes. I would have preferred waiting until just before the first hard freeze is predicted, but with the rain this storm will bring — I knew my tomatoes would split.  So I harvested all the big ones and/or the ones turning red.

There are still that many left on the vines that are small to medium sized. I left them because if the weather turns nice after this storm there is always a possibility that I’ll get another large harvest.

I harvested about 300 tomatoes before the storm. The large oblong tomatoes are Opalka.  Two ripe ones in the first baskets and another in the second.

What really surprised me was that among the 300 tomatoes were about 40 very large Opalka tomatoes!

The reason that deserves an exclamation point at the end is because I planted several Opalka tomato plants in mid- June and as of mid-September each had produced no more than two or three tomatoes.

I wanted to pull them up the worse way — but years in the garden has taught me never to be hasty in pulling anything up. Always wait to “see” the “rest of the story”.

In spite of that I had pretty much resolved not to grow them next year because they take a lot of space and 2 or 3 tomatoes is not enough return on investment — especially when I’m use to hundreds of tomatoes on one plant.

I was absolutely shocked to find 40 of these gigantic oblong Opalkas on the vines.  I even found 3 ripe ones which will be delicious roasted at 425 degrees with olive oil, garlic, and basil.  (If we loose power — I’ll have them after the storm.  What a way to celebrate!)

There are still lots of small ones on the Opalka vines —- especially the plant that has a prime spot.  So —- we’ll see what happens.  Maybe I’ll reconsider and plant at least just one next year.

Some of my pepper plants have dozens of huge peppers just waiting to turn red.  And I LOVE my red peppers. I harvest at least 3 to 5 green ones each day — (the medium sized ones) — for daily use and leave the big ones to turn red.

If you grow peppers you know how brittle and delicate the branches can be and it doesn’t take a lot to break a large branch.  Then your peppers are harvested whether you wanted them to be or not. Strong winds can be the end of the peppers.

Effort to Save Them

I pulled out some old row cover fabric I’ve had for years and wrapped most of the peppers to try to keep some of those huge fruits from blowing off in the wind that we’re expecting.

It might end up being the joke of the season, because wind can tear up the peppers and all their wrappings in a heart beat.  But I figured it was worth a try.

I left a few unwrapped just to compare how they fared with the supported ones.

After the storm I’ll go out and gather any that have fallen off and freeze what I can’t use fresh. 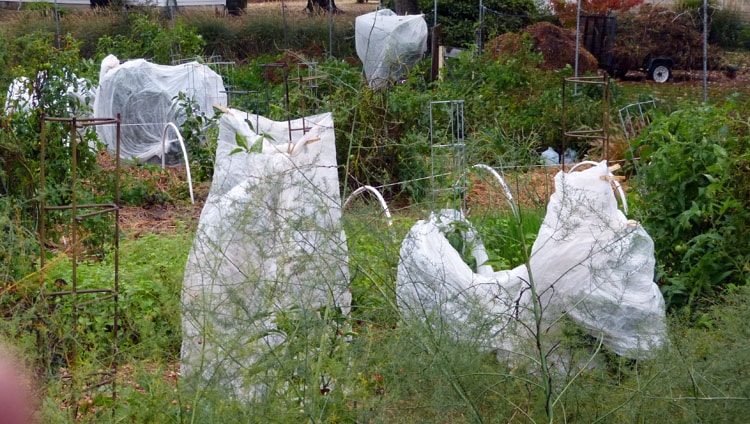 I hope all of you will fare the storm well and come to no harm.  Let me know how you do.  I’ll be thinking of everyone in Sandy’s path.

A Quick and Delicious Tomato Sauce

Addendum to a Quick and Delicious Tomato Sauce

Organic gardening is easy, effective, efficient and a lot healthier.