Last year as usual I started my tomatoes in jugs (succession seeding) from about the middle of March through the middle of April. After they germinated I taped the jugs closed and put them outside.  It seemed a bit colder this year so I gave them additional protection by placing the jugs under a makeshift cold frame.

Transplanting to the garden started in late April.

Last summer (2012) was the first year I’ve had early blight at this garden. (Moved here in the fall of ’98) Towards the end of July of this year when the vines were heavy with fruit early blight started again.  After about a month or 6 weeks it subsided on most varieties.

The disease was worse on some of the new varieties I was growing and because of that I’ll never grow them again. (Julia Child and Oxheart.)

I’ve seen gardeners who had blight so bad that it stripped the vines of leaves for the rest of the season and left only a a few tomatoes hanging.  I think in the case of those gardeners it was their impoverished soil that was responsible.  But after this year, I realized that variety can have a lot to do with it as well.

Although Julia Child and Oxheart were by far the worst, San Marzano was a close runner up.  I won’t grow any of those varieties again.

Stakebreaker, Beefsteak, and Big Beef (the open pollinated version that is not owned by Monsanto) all had blight in varying degrees depending on where they were located around the borders and garden.

Two of the tomatoes planted in rye stubble — one at the upper end of the garden (Big Beef) and one at the lower end (Beefsteak) —did better than any of the other 22 plants. There were so many variables that I’m not really sure exactly what condition or conditions were responsible for that.  But it was VERY noticeable.  Although I was extremely pleased with the results of planting into the stubble of the rye, it did not stop the blight.  Others planted in the stubble still had early blight. 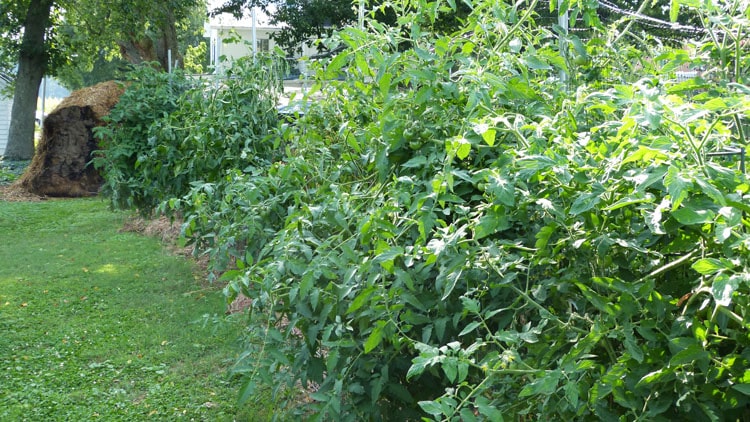 The tomato (Beefsteak) closest to the roll of straw to the left never got blight.  The tomato to the immediate right of the Beefsteak which was Julia Child lost all its leaves and never recovered.  All of these were planted in the rye stubble. Picture was taken August 9th.

Early blight stopped a month to 6 weeks after it started and the new growth that followed was unblemished in all varieties except Julia Child and Oxheart. Those two never totally recovered.

For years I’ve staked my tomatoes with one tomato stake and added the second if needed.  I’ll be making a change in that procedure next year.  I think they get so crowded that it hampers air circulation which could give early blight more of a foot hold when conditions favor it.

Next year I’ll put a tomato stake next to each tomato and one 3 feet from the tomato. I’ll  suspend a bamboo pole or maybe a piece of pvc pipe as a rail between the two stakes. (I can run them through the top sections of the stake and then secure them with ties.)  I can run strong twine at an angle from that rail down to the tomato and secure the twine to the bottom of the stake.  I think this will allow the foliage to have the space it needs for better air circulation.

I’ll perfect the plan as I go.  (There are lots of ways to do this — but I want to use what I have on hand rather than buy something new.) 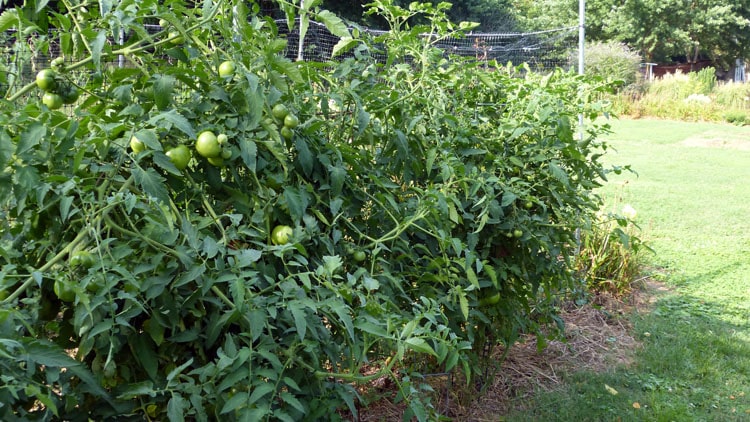 This is to the right of the above picture.  These also were planted in the rye stubble.  These pictures were taken August 9th.

(It’s interesting to note that when we use to live by the water (the river)  we always had tomatoes in the garden until sometime in December because the river holds more heat. Hard to believe that only 7 miles inland makes all that difference.)

Another Change for Next Year – Same Harvest from less Plants

The last several years I’ve increased the number of tomato plants to 40 because I was trying new varieties.  This year I decreased to 24 plants and still included new varieties.  (Harvest was better than usual!)

Rather than try several new varieties next year, I’m sticking to only a few tried and true.  My open pollinated Big Beef and the hybrid Dafel will head the list. I think I can easily get the same amount of tomatoes from only 12 plants using my tried and true varieties.

For the last two years  (the time I’ve had the early blight) we’ve had cold weather at tomato planting time.  I’ve wondered if that could be stressing my plants even though they don’t look stressed when I transplant to the garden.  Then when they’re loaded with fruit (which puts a lot of stress on any plant) symptoms of early blight show up.

What Pests and Disease tell me

Although my garden is in overall good health and my tomatoes are strong enough to make a comeback from the early blight — the blight lets me know that something is not just right.  Whatever pests there are in my garden let me know the same thing.

I’ve asked myself lots of questions this year. I’m still not sure what the problem is, but I’m working on it.

Tomato Plant Diseases – How Much do you Need to Know?