The question of whether a home grown tomato tastes better when it’s vine ripened is a bone we could chew on for a long time without having everyone agree on the answer.

I’m not sure — but my guess as to how that saying got started was probably when super market no-taste-tomatoes came on the scene.  As we now know they are bred for shipping and color — not for taste.  It’s my thought that folks not knowing that fact said — “they have no taste because they’re not vine ripened. ” The saying certainly caught on because it’s still said and believed. (Of course, tomatoes bred for the commercial market have no taste anyway — it wouldn’t matter how long they were on the vine.)

Before I started to garden I was of the same opinion and I think many people are. It’s seems to be the predominant belief promoted in information online.

Here’s a true story that proves the point.

We had friends who use to live within a mile of us.  We visited each other’s garden often.  Every time I would visit my friends in tomato season I would see dozens and dozens of bright red tomatoes hanging on the vine.  They never picked tomatoes unless they were going to eat one or can them. I learned later it was because they felt that in order to have good taste the tomato had to be vine ripened.

I usually always have tomatoes well into December and sometimes January, because I pick all of them before a hard freeze is expected. Year before last I had a bumper crop and picked about 1,000 tomatoes before a hard frost.  Our friends were over one day and I asked if they’d like to have some tomatoes.  I knew that their tomatoes had stopped producing months ago. (Not picking them – but rather leaving them hang on the vines – was one of the reasons their plants stopped producing.)

They were a bit skeptical, so I asked if they’d like to taste one of the tomatoes that had been ripened off the vine.  They did and were amazed at the wonderful flavor and taste.  Our friend said, “I guess we fell for the old saying that there is nothing like a vine ripened tomato.  Boy! were we wrong!” 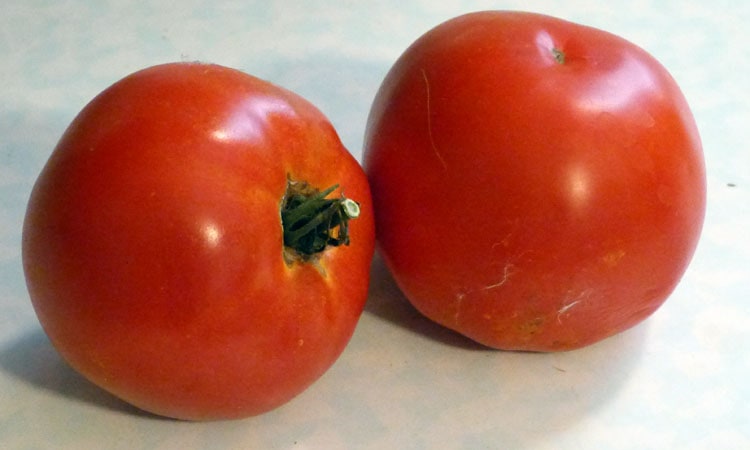 These tomatoes were harvested when they had just a blush of color about 4 weeks ago.

When to Harvest Tomatoes

I visit and harvest in my garden everyday.  I pick tomatoes when they have the first blush of color on them.  Sometimes if bugs are getting them, or if rain is expected (which can cause them to split) I’ll harvest them when they’ve turned a yellow/green. Very seldom does a tomato stay on the vine in my garden to get fully red. And I am not sacrificing one bit of flavor! 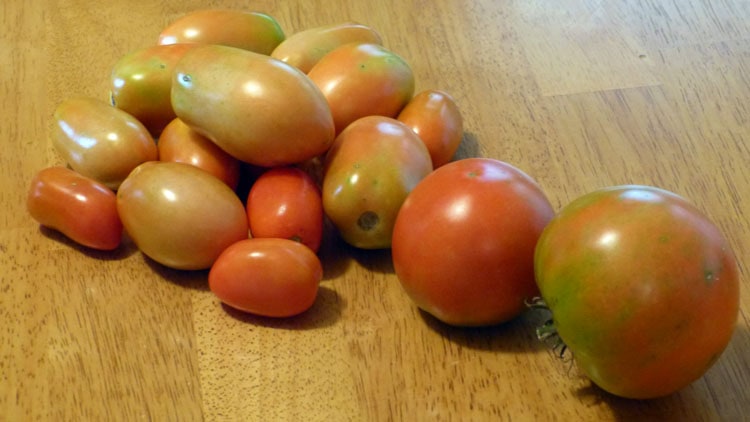 These Window Box Romas and larger tomatoes were harvested yesterday. They had just started to turn color.

I usually put them in baskets and keep them in my office which is a warmer than where I store ripe tomatoes. (Not hot — just warmer than cold.)

After they are fully red I put them in a cooler location. I have a basket that holds a single layer of about 100 tomatoes.  I’ve kept tomatoes this way for a month —- sometimes a bit longer — fully ripe and still the right amount of firmness.  Some varieties keep longer than others.

If you’re new to raising tomatoes and choose to do a little reading and video watching online — don’t fall for the old thing about tomatoes needing to be vine ripened to be good.

To taste delicious a tomato has to be

A Quick and Delicious Tomato Sauce

Addendum to a Quick and Delicious Tomato Sauce
______