Friend and reader, Betty D, emailed me recently to ask if I ever planted Russian Kale in the fall for winter harvest. And if so, when do I plant.

Since I had more answers than Betty had questions, I thought what I’ve experienced with this kale would make a post that might give you some different ideas.

Like many folks, I thought of Kale as only being the kind you see in grocery store, or that folks cooked up by the bushel. Whatever the reason may be, it never appealed to me and I never grew it.

It was probably early in 2012 when I read somewhere that Russian Kale and and Lacinato Dinosaur Kale (a/ka/ Tuscan kale) where the superior kales.  Sounded like a good choice for my “new crops to try” that year; so I ordered. Started the seeds in flats or jugs that year in late winter and as usual succession planted at least 3 times.

Lacinato never seemed to like me and after I became enamored with the Russian Kale, I didn’t feel like bothering with the Lacinato anymore.

Russian Kale was impressive from the beginning!  In early spring it was one of the most beautiful plants in the garden. Growing huge (sometimes more than 5 feet) and enough blue green leaves to feed you all the kale you can eat.

I use small new leaves for salads and I chop and saute the larger leaves with oil and garlic.  (When I’ve been desperate for greens, even the larger leaves torn and mixed with other greens have made wonderful salads.) 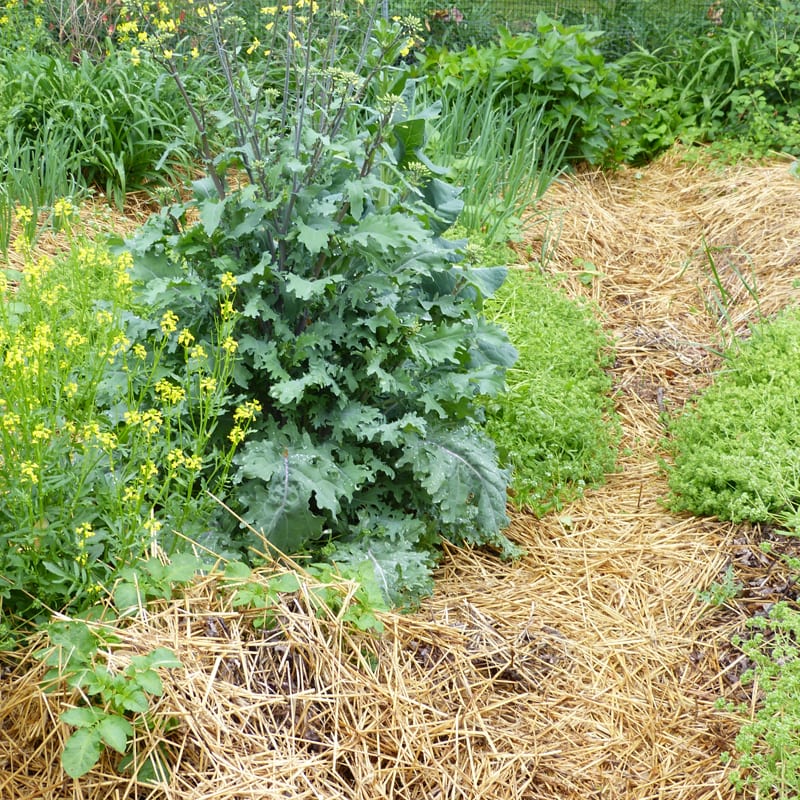 Russian Kale on May 1.  As you can see it’s starting to bloom.  The blue/green leaves are still delicious.

And Then Came the Harlequin Bugs and Those Cabbage Worms

The Brassica species of plants include kale, cabbage, broccoli, cauliflower, brussel sprouts, collard greens and a few others. If you grow these plants regularly, I’m sure you’re acquainted with the harlequin bug and the various cabbage worms.

Harlequin bugs are in the stinkbug family and brilliantly marked with red, orange and yellow.

Those worms (there are various ones) come from different kinds of moths.  The one I’m most familiar with is the little white one that looks so lovely flitting about the garden — until you find out what it’s doing. 🙂

I’d never been bothered with these pests except for one or two here and there. So I’d had no previous damage by them that I could tell. But with Russian Kale and a few other Brassicas in my garden, harlequin bugs and the worms increased in number with the heat of summer.

The Mistake I Made

I didn’t engage my brain!

I just went along out habit and pretty much ignored the harlequin bugs (and the worms) as I always had in the past. All of a sudden, late in the season, after the bugs had made pretty much of a mess of my kale, my brain started working.  I realized this problem was not going to get better until I made these pests part of my daily “search and destroy the bad guys and their eggs” mission.

Even though it was late in the season, I start looking and destroying daily.

It took me two years to get the numbers down to a manageable number.

Last year with Bill being sick I was not able to do a thorough job of search and destroy so I anticipated great numbers of those pests this year.  Oddly, they’ve just shown up this year in my garden in the past two weeks. I assume it was the cool spring and early summer that kept them away.

They’re defacing some of the older brassicas that I’m allowing to seed, but the numbers are manageable so far.   I didn’t see any bugs on the new seedlings, but I saw a tiny bit of damage.

Since the numbers are low, my incentive is even stronger to kill as many as I see.  Hopefully, they’ll be fewer in number with each passing year.

How I Plant and When

I don’t plant anymore and haven’t since that first year.  I just let a plant or two or three reseed.

That can happen two ways in my garden: 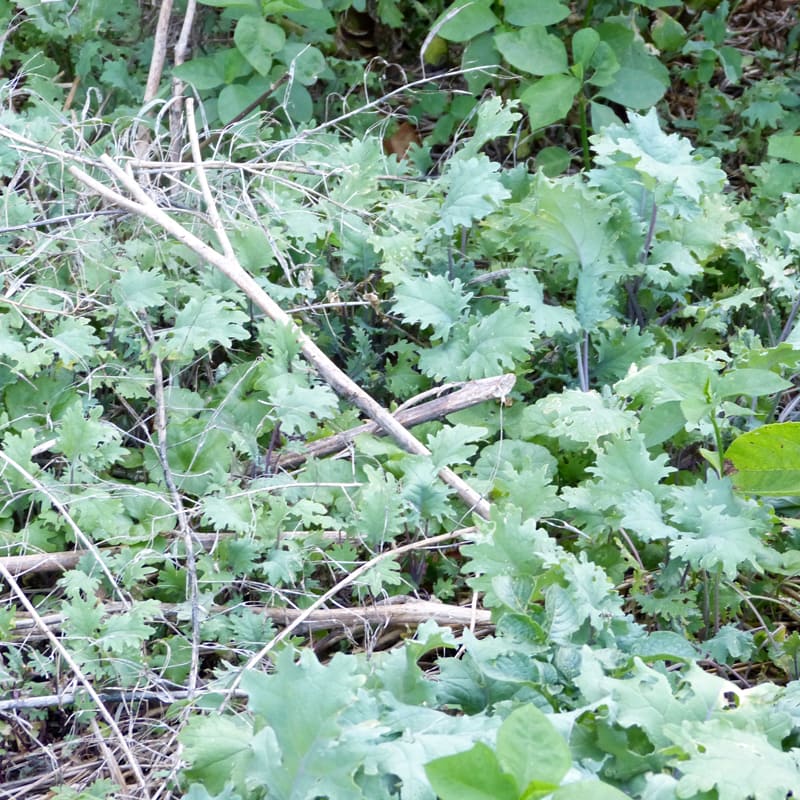 Russian Kale seedling – July 21 – coming up through cut stalks I laid there. 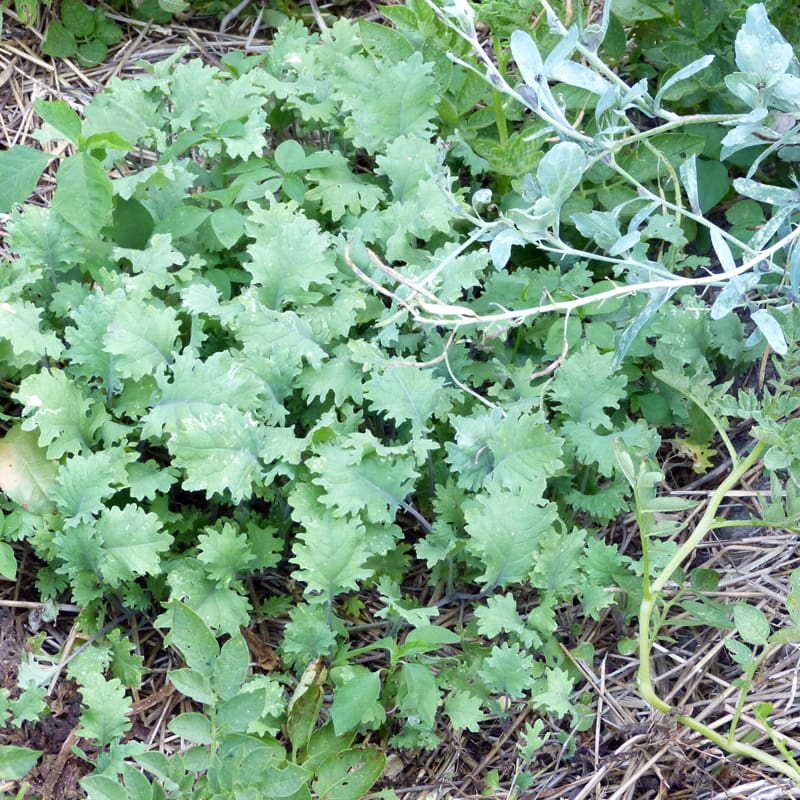 Patch of seedlings coming up where the parent plant dropped the seed. July 21.

I’ve already cut down the “finished” plants from last year.  They reseeded and I have new Russian Kale plants coming up in profusion at various places in the garden.

Eventually I’ll throw mulch on top of or pull up the seedlings in the beds that had the parent plants. (Don’t want them in the same spot every year.)

Seedlings coming up in other places will be allowed to “fight it out” to see whose the strongest.  Those are the ones that’ll be left for this fall and winter and the spring and early summer of 2017.

As fall approaches I’ll have more seedlings come up and will take the same approach with them.

If you decide to do this, just remember that if Russian Kale does well for you and gets huge as in my garden, you won’t need many plants. (Better to have too many on your first try until you determine how much you’ll use.) 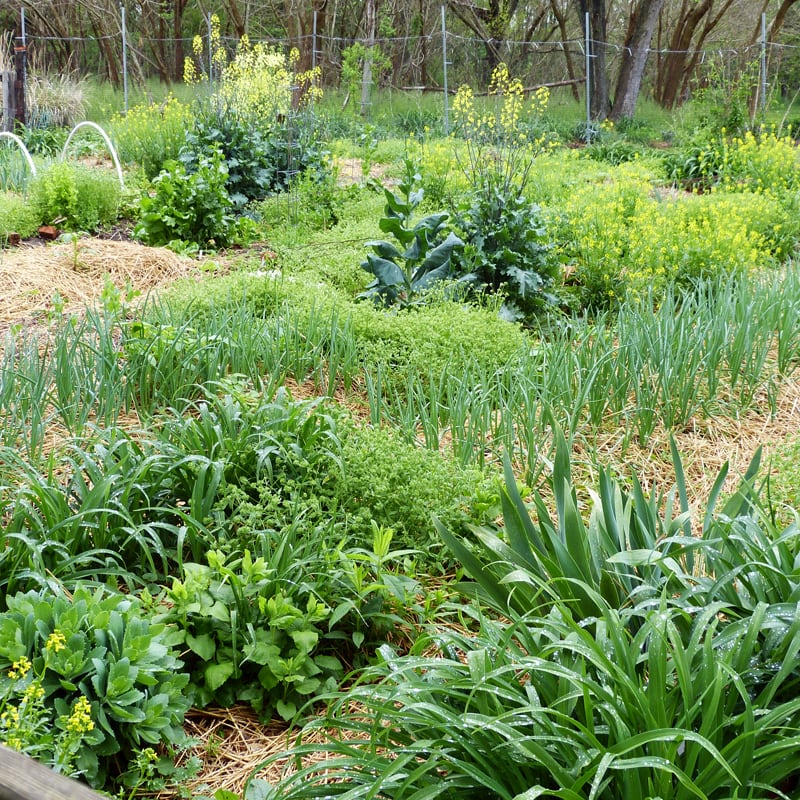 May 1 – The tallest plants are Russian Kale.  They’re starting to bloom and make seed. Leaves are still great.

Kale doesn’t need as much protection in my garden as lettuce and such. If it gets and stays really cold (below freezing and especially below 28 degrees), it’s a good idea to be prepared.

Seedlings that come up in the fall (Sept/Oct) are easy to cover since they’re shorter.  I use concrete reinforcing wire and bend it to make a half round over the bed. (It hold the covers off the plants.) 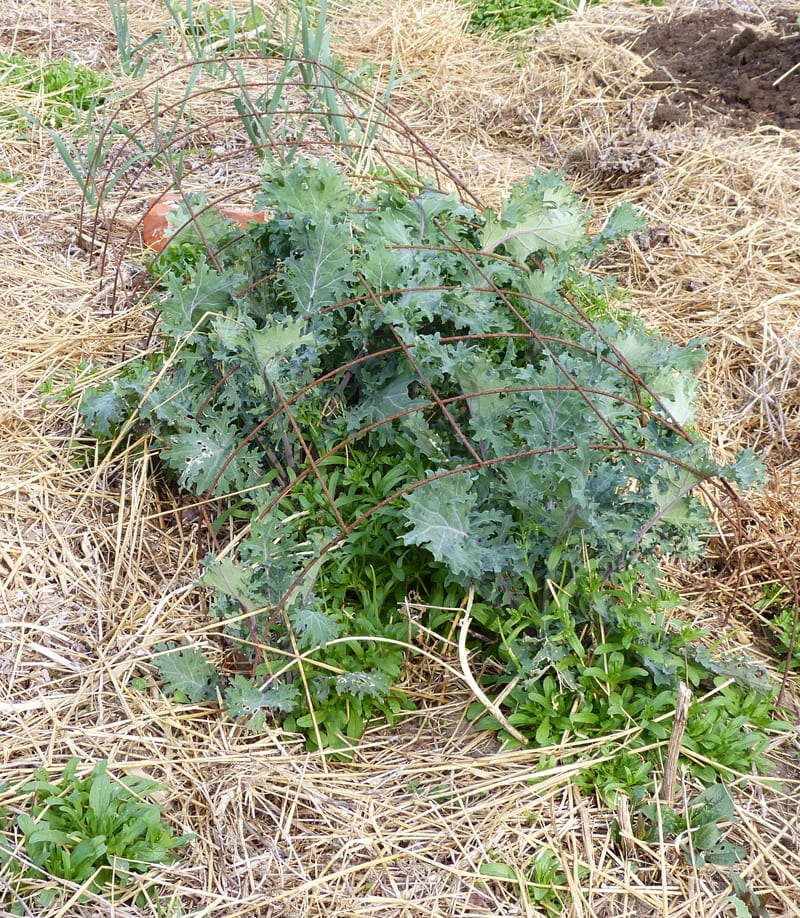 March 25 – Overwintered Russian Kale About 1 foot tall. I had already taken the fabric and plastic out of the garden but the concrete reinforcing wire remains over the kale and mache.  (That green stuff is mache.  Delicious!)

A note about the wire: When spring comes and Kale resumes quick growth it will grow through the reinforcing wire. So if you don’t want that to stay in your garden almost all summer, take it up before the kale grows through it.  Otherwise, you could pull up your kale when you take the wire up.

One of the most nutrient dense foods, a cup of raw kale has all kinds of vitamins and minerals. Vitamin A, K, C, B6, Manganese, Calcium, Copper, Potassium, Magnesium, B1, B2, B3, iron, and phosphorus.

It makes a great addition to the garden, especially since you’ll have it at a time other greens may be in short supply.  In the dead of winter and early spring this can be a great boost to your diet.

If you use my approach to growing Russian Kale, let me know how you do.  Hope you enjoy it as much as I have.

All content including photos are copyrighted by TendingMyGarden.com.  All rights reserved.