This summer is the first in many years that powdery mildew has not already (by August) taken its toll on my summer squash and cucumbers. The reason is that conditions haven’t been right for the disease. This year, up until mid July, we had rain every few days,  the humidity was low, and temperatures not extreme. Our summers are usually hot, humid, and dry which are perfect conditions for that white stuff that in its advanced stages looks like someone coated the plant with talcum powder.

As with any disease or pest your best and strongest defense is having healthy soil.

These things won’t prevent powdery mildew when conditions favor it, but they will help your plants to last a lot longer and produce for a while in spite of it.

If you can find resistant varieties that you want to plant, that’s another tool in your arsenal. (These varieties can still get the disease, but resist it better than others.)

I never seem to see resistant varieties when I’m looking for seeds and the ones that I do find are hybrids. (After seeing the research that shows the nutrient content to be higher in open pollinated plants <heirlooms are open pollinated>, I don’t see any reason to grow hybrids since I want food with the most nutritional content.)

Should You Trash the Residue from Infected Plants?

There have been years that even when I knew measures could be taken to slow its spread, I couldn’t take them because I just didn’t have the time to do it especially if I had huge plants that covered a lot of area. I harvested as long as I could and when the plants finally died I left the residue in the paths or on top of the bed to return to the soil.

According to information on a University website, that is something that should NOT be done. They advise removing and destroying all infected debris in order to decrease the ability of the fungus to survive the winter. They even advise not composting any debris that has been infected with powdery mildew because the pile temperatures may not be hot enough to kill the fungus.

I followed that advice many years ago in my first couple of decades of gardening. I removed all peony, monarda (bee balm), squash, and cucumber debris that had been infected with powdery mildew. My summation after many years of this was that if conditions are right powdery mildew appears whether the prior years debris was removed or not. So in the interest of my time, I just leave the debris.

At present I have 3 areas of the garden with mature summer squash plants and 2 areas with mature cucumber plants. In mid July the rain stopped and the heat and humidity soared. Those conditions only lasted a week, but the oldest squash plant in the garden and the one that had been brutally attacked by the SVB (squash vine borer) started showing signs of powdery mildew. (Note that the stressed plant is the one that showed the signs of powdery mildew.) 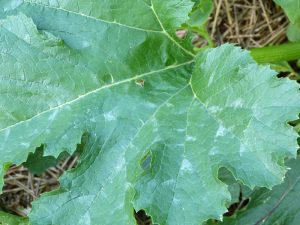 These white patches were the first signs of Powdery Mildew on the squash leaf.

I mixed about a tablespoon of baking soda with water in an old empty Windex spray bottle I keep on hand, and sprayed all the leaves and stems of the squash (whether or not they showed signs of powdery mildew).  I did that twice until low humidity and rain returned. All seems well. No powdery mildew.

Last year when powdery mildew infected a large squash plant in the border, I didn’t catch it for several days. Even though PM had a foot hold, I sprayed with the baking soda and water mixture. The mixture didn’t (and won’t) get rid of what is already there, but it did stop the spread. The life of the plant was extended considerably by doing that and it gave me some nice squash.

Keep in mind when and if you use this mixture, that it’s a preventative rather than a cure. Doing it once a week before the disease ever shows any signs, will more than likely render best results.

Once the plant has mildew I’d spray once every day.

I’m not too careful about the measurement for the baking soda (sodium bicarbonate). Most of the things I see online indicate using 1 to 3 teaspoons of baking soda to 1 quart of water. I was a little heavy handed with mine.

Some folks add a drop or two of a gentle soap like Ivory Liquid to give the spray more sticking power.

I have a section of monarda (bee balm) in my side border that is several feet away from cucumber plants that are massive and at this time still beautiful. If you’ve grown monarda you know that it’s very prone to powdery mildew. 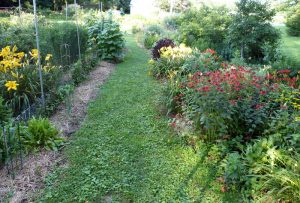 Monarda is the red bloom on the right. The cukes are the tall plants on the left. No mildew on the monarda on July 15th when this was taken. Conditions changed the next day and within two days the monarda was white with PM. (Clicking on the picture should enlarge it.)

How I Deal with the Infected Monarda

I deal with powdery mildew on monarda by keeping the allowed space for that plant small. In years when conditions don’t favor the disease – its beautiful.

Most years it gets PM by June. It looks awful! I just cut it to the ground and forget about it. 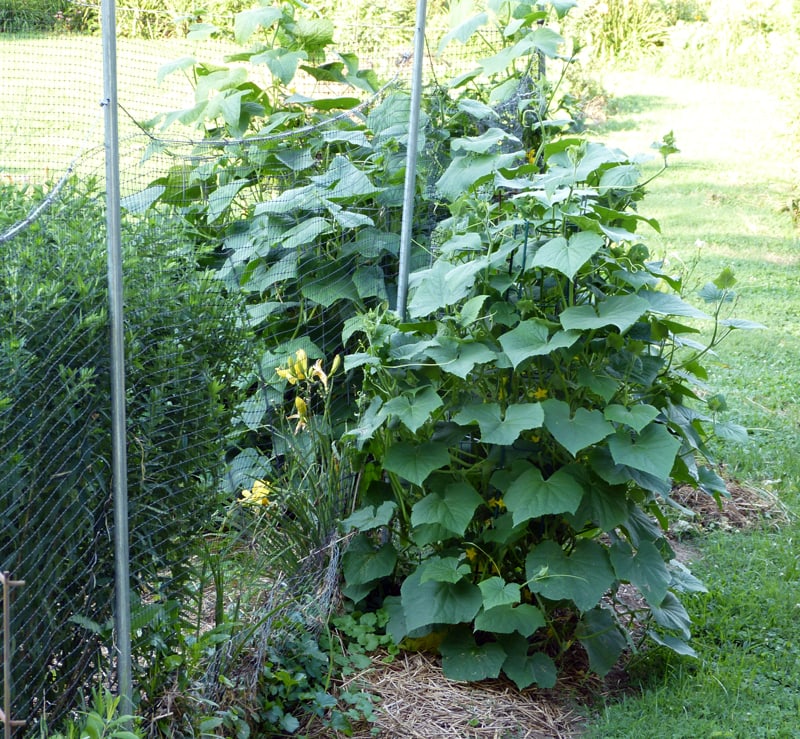 Marketmore cucumbers on the outside of the fence and Diva cukes on the inside. Still looking great on August 3rd.

Another home remedy that is said to work as well as the baking soda is a mixture of 1/3 cup of powdered milk with 32 oz. of water.

I’ve never tried this. I don’t have milk in the house, but even when I drank milk I drank organic milk and I wasn’t going to use it as a spray for PM. 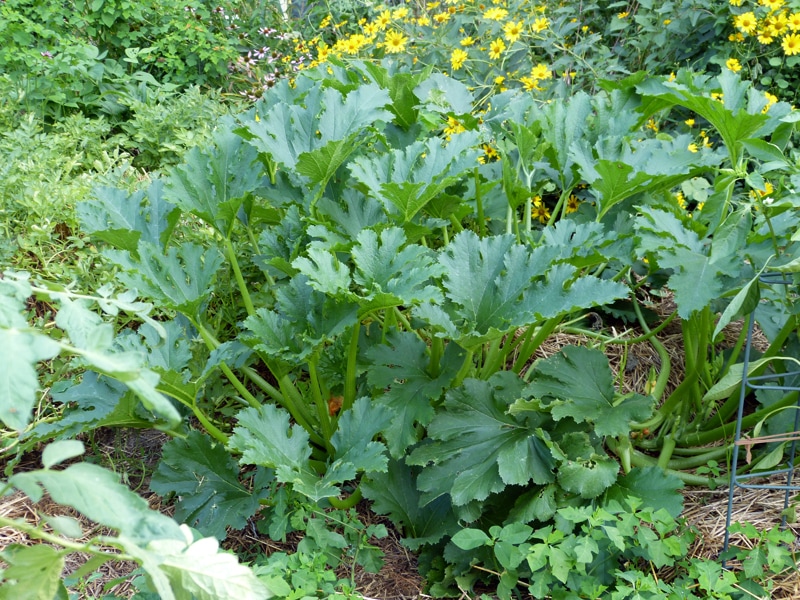 Still no signs of powdery mildew on this squash and here it is August!

Commercial Products (Links to check out the products are at the bottom.)

Various sources recommend copper fungicides and/or sulphur. I wouldn’t use either. Too much like going the conventional road for me. I seldom use any sprays at all, but when I do, I want something that I feel is not “right on the line”, but is keeping as far away from anything harmful as possible.

Neem oil will stop powdery mildew. As mentioned in my post on potato beetles, Neem is not something that I’d use either.

My Choice of a Commercial Product

Actinovate® would be my choice of a commercially produced product. At first glance it seems a bit pricy but a little goes a long way.

I would think that a disease like early blight on tomatoes would require both methods since the fungus that causes early blight can stay in the soil over time.

What Actinovate® Is and How It Works

These microbes colonize and grow around the structure of the plant treated, forming a synergetic relationship. This means their combined effect at protection is greater than their individual effect. The microbes feed off the plant’s waste materials and then secrete beneficial and protective by-products for the plants. That’s how they suppress and control the fungal diseases.

Natural Industries fact sheet (the one on Johnny Seed website) states that “when used as a preventative, researchers have seen Actinovate® work as well or better than most chemicals”. So keep in mind that it’s almost a given that you’ll get better results when you use this control as a preventative.  That is: BEFORE you have a problem. That being said, I’ve read lots of reviews that got good results using Actinovate® even after they had a severe problem.

I haven’t been able to find anything by Natural Industries that specifically addresses what happens if Actinovate® is used with “municipal” water that usually has chlorine and who knows what else in it. But surely chlorine-free water would have to be used in order not to kill the bacteria.

I’ve placed links below so you can check out the various commercial products.

Just keep in mind that powdery mildew can show up in the best of gardens when conditions are right for it.  It’s just the way things are.

But depending on our time and resources we can control it enough to get a good harvest and/or have our gardens look a little better.

All content including photos are copyrighted by TendingMyGarden.com.  All rights reserved.