Potatoes are in more than a dozen spots throughout my garden. The plants are beautiful and looking at them is enjoyable as I check everything each day.

When Bill was alive more potatoes were needed. Now it’s no longer necessary for me to buy seed potatoes. But I still want (and have) an abundance for eating fresh and also making soup. (For more on how I grow potatoes you might want to check out this post.)

Do any of you remember being driven crazy by potatoes beetles? I certainly do. Having to kill hundreds of larvae and/or adult beetles each day is not a fun task.

Or maybe that’s your situation right now. Be encouraged by the fact that as you continue to improve your garden AND if you take a proactive approach, potato beetles will decrease over time and become “comfortably controllable”.

Things in my garden have improved to the point where I have very few potatoes beetles. Found only two  adults in mid May. Found several larvae each day for the past few days. A very insignificant amount considering the number of plants I have all around the garden.

Helping Me with “Search and Destroy”

I see a variety of wasps checking the potato plants each day, although their main focus this year seems to be on my broccoli and cabbage. (Yeh!)

It’s fascinating to stop and watch these wasp take away cabbage worms and/or potato beetle larvae. They take them back to their nest and feed them to the wasp larvae.

Of the many varieties of wasps in the garden, the ones I’m most familiar with are the ones that commonly build their nest under eaves or between my storm window and regular window in the bathroom upstairs. (Not convenient for me at all.)

For almost 40 years, hundreds of bees and wasps have patrolled my garden with me.  I’ve brushed against them as I move through the plants. My hands and arms are right next to them on a daily basis.

I’ve never been stung inside the garden. Although I did back into the tiniest bee I’ve ever seen many years ago. That was enough to bring a loud “Ouch!” and the kids that were there at the time thought it was hilarious.

Last year, in pulling up a dead lavender plant in a border that had not had timely attention, what a surprise to have a dozen wasps let me know that I was invading nest-territory. I was stung on the face twice, but it was nothing compared to what they’re capable of. I’d like to think they knew it was me. 🙂 It certainly seemed that way.

The Biggest Mistake Made With “Pest” Insects

I think probably about the biggest mistake gardeners can make with “pest” insects is to ignore them.
If you’re proactive and address the problem when you first notice it and are diligent about “search and destroy” you can keep them under control.

(I made the mistake of ignoring harlequin beetles and the various cabbage worms back in 2012. I swore off growing brassicas for a while after that. Full story here.)

Even though I have next to no problem with potato beetles, I pay attention to the plants as I pass each day — or at least every other day. A few larvae gone unattended can turn into a much greater number within a month.

Do the math:
Each female potato beetle can lay up to 350 eggs over 3 to 5 weeks. Eggs begin to hatch about two weeks or sooner. Larvae can complete development in as little as 10 days; then drop from the plant, burrow into soil and pupate and emerge as an adult in 5 to 10 days.

Handpicking as a Control

As unpleasant a task as handpicking is, it might be the best method of control.  Before deciding that you have too many potatoes for hand control, you might want to review what Jim Gerritsen, one of the foremost potato growers in the United States, had to say about it. 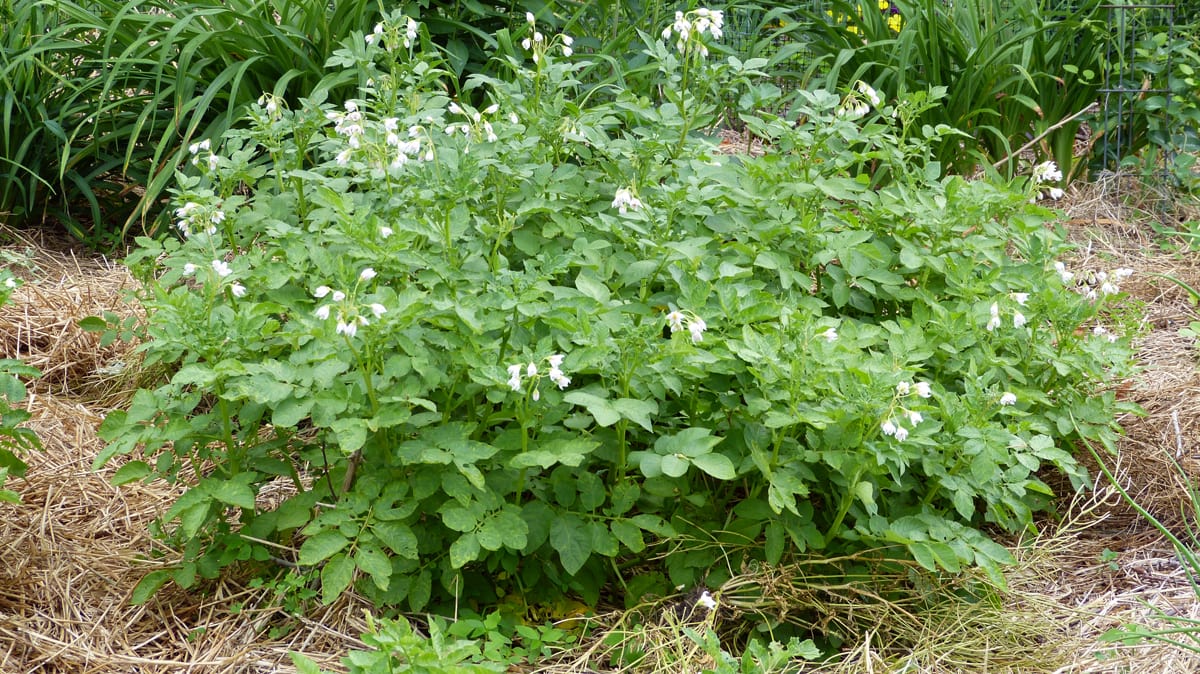 Some of the early varieties are in bloom. That means new potatoes on my menu soon!

If you’re not growing potatoes, I hope you’ll consider it for next year.  You’ve never really tasted potatoes until you grow your own in great garden soil. Nothing can compare.

Organic Pest Control – Is It Just About the Soil?

Growing Potatoes – Is the Natural Way the Best?

All content including photos is copyright  by TendingMyGarden.com.  All Rights Reserved.