I can’t say that I don’t enjoy having a good part of the world’s knowledge at my finger tips via the internet.  It’s great to be able to research something from the comfort of your home at almost anytime day or night.

But I think we’ll all agree it can at times be information-overload.

If you’re new to a subject, you’ll interpret the information you find totally different than a person having lots of hands-on experience. Like most things in life — the more you already know — the better you can sift through the information to choose what’s valuable and what’s not; what’s true and what’s not.

I can’t help but feel fortunate about NOT having had the internet when I first started gardening 34 years ago.  I’m convinced that if it had been available it would have taken me much longer to be successful in gardening.

As it was —- I was hungry and wanted to eat.  So I gardened and ate.  Pretty simple.

To further make my point, I’ll use peppers as an example. If you’ve read my other two posts on peppers (post one, two) you know my history with peppers.

I’ve always had peppers and plan to have a lot more this year.  But had I read — as a new gardener — all the information available online about peppers — I think I would have been convinced that they’d be too difficult to grow.

According to everything I’ve read, peppers need just about everything I could never give them.  Boy! I’m sure glad my peppers didn’t know.

Below I’ll address some of the concerns folks have and then give my approach to handling it:

Last year my friend who is so good with peppers, brought me several of his 3 inch sheepnose seedlings that he had no room for.  In one pot two seeds had germinated right next to each other and were entwined.  It was either cut one off at the base (as would be the popular choice) or plant them together and see what happens.

I planted them together and they grew to almost 6 feet tall and about 3 feet wide — taller than any of my other peppers. They gave me dozens and dozens of peppers and were by far one of the most beautiful sites in my garden. When seeing it, some visitors to my garden wanted to know what kind of tree it was. 🙂

Obviously, the outcome was dependent on other circumstances — not just the two peppers growing together.

I started my pepper seeds at the end of February. Way too early! It stayed cold through May and hot weather crops like tomatoes, peppers, and eggplant didn’t care for that. Temperatures were below 55 degrees much of the spring.

I kept the flat inside until the peppers germinated. Since I don’t have room or enough light for them— I put them outside under a cold frame the day after they broke the soil. They were about an inch (certainly no more than 1 1/2 inches) and they stayed that height through May even though I transplanted some to their own little pots.

My friend and his wife came over about mid May  to bring the pepper seedlings I mentioned previously.  I showed them my little tiny seedlings.  Well, his wife just burst out laughing.  He — not believing that I planted these pitiful little seedlings in February — said, “But you just planted those, right?”  I said.  “Nope — they’ve been just like that since February!”

He didn’t say but I knew he was thinking it was good he brought me a few peppers because I’m sure he was convinced that I’d never get peppers from those tiny seedlings that had been stunted for 3 months.

Surprisingly, all grew to at least 3 feet and several reached 4 and 5 feet. The plants were loaded with peppers all during the growing season until after the second frost. 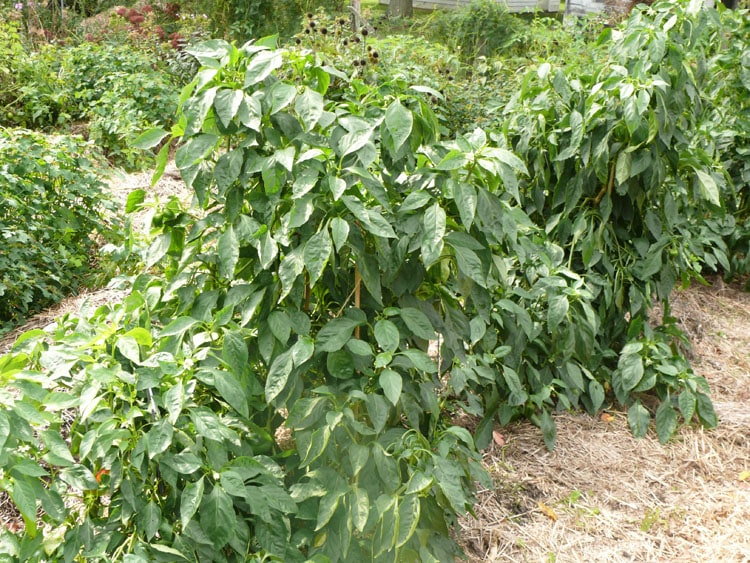 Pepper plants – No longer stunted! These are about 3 1/2 feet. 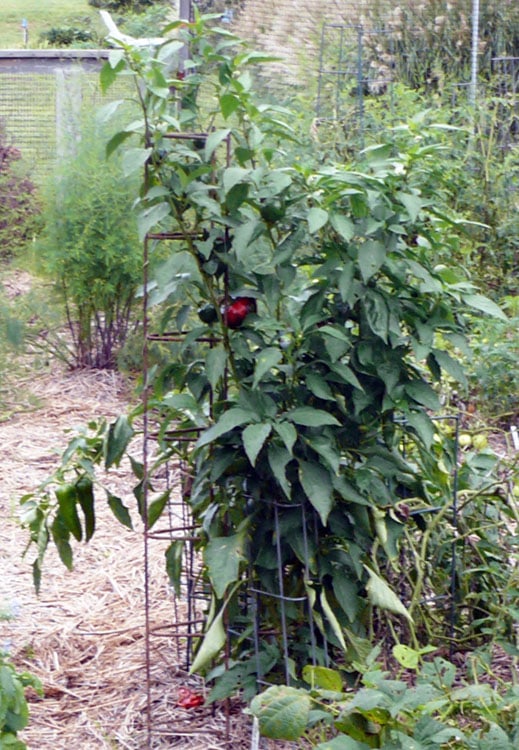 This one little guy reached 5 feet and gave me some of the most beautiful peppers I had! 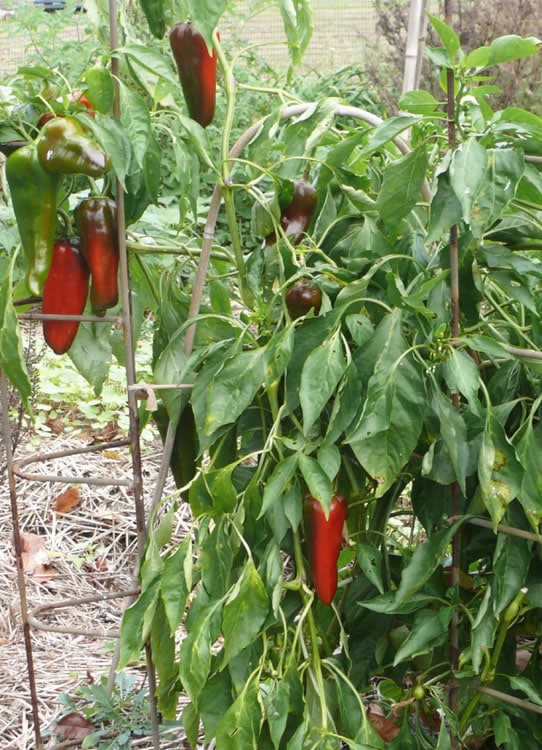 Carmen Peppers ripening in abundance. Hard to believe this plant was an inch tall for 3 months!

You can be successful with peppers or just about any vegetable that is known to grow in your area, if you follow basic garden principles.  Prepare the soil deeply, add lots of organic matter and mulch. This will make healthy soil and if you have that  — nature will balance the natural occurrences in your garden and your garden will thrive.

There are so many variables from season to season and garden to garden.  Nothing is ever the same.  And obviously there will be times that somehow the stars align perfectly for conditions that peppers (or any other vegetable) love.  Then they will thrive even more. Reality is that  you’ll have excellent years, and sometimes you’ll have less than excellent years.  That’s just the way of things.

Peppers seem to already know this and most of the time are perfectly willing to sit and wait for the right conditions.  So when you read all the stuff that’s out there about  peppers or any other vegetable —- just remember — it ain’t necessarily so.