Peppers are a vegetable you can’t set your clock by so to speak. Given a chance, they are survivors and will do what it takes to not only survive but produce an abundance of fruit.

They like warmth, so they need to be started inside to get a jump on the season. Once you plant them outside, if the weather stays cool they’ll just sorta sit there and wait for it to warm up. In severe heat, they won’t set fruit. If it’s too dry in the summer and they need moisture, they’ll stall and wait for the right conditions before growing or producing. Even if you’re set up for watering, its not the same as rain.

They’re sensitive to cold and if the frost hits them they are pretty much over unless you have some type of row cover or protection for them.

Most of the time I have great peppers from August through October.  But in years when conditions have been just right, I’ve had peppers in abundance from May through November and sometimes even through December! 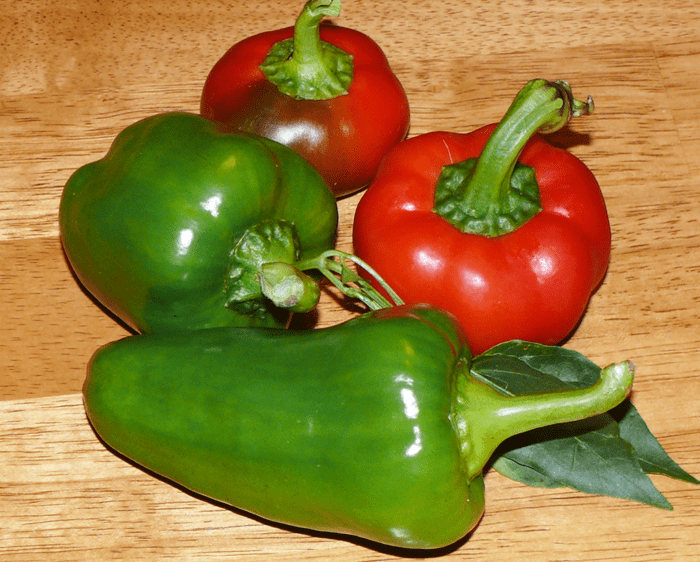 Peppers from my garden.

How do you get red peppers?

For the record — just in case you don’t already know — most all peppers will turn yellow, orange or red when they are mature.   It was this maturing that always gave me trouble.

I’ve been growing peppers for 32 years and its only been in the last two years that I’ve been able to harvest red peppers without some bug getting to them the minute they start to turn red.

What turned all that around?  A friend and the variety of pepper.

I’ll never forget the first time I saw red peppers hanging by the dozens on the plants of my then “new-found” friend.  It was about 3 seasons ago and believe me I was dumbfounded!

He grows two type of peppers and saves his seed from year to year.  One pepper is a long red pepper.  Its name has long been forgotten. The second pepper was called sheepnose. He was nice enough to share seedlings with me the second growing season of our friendship.  I was just about the happiest person you’ve ever seen! 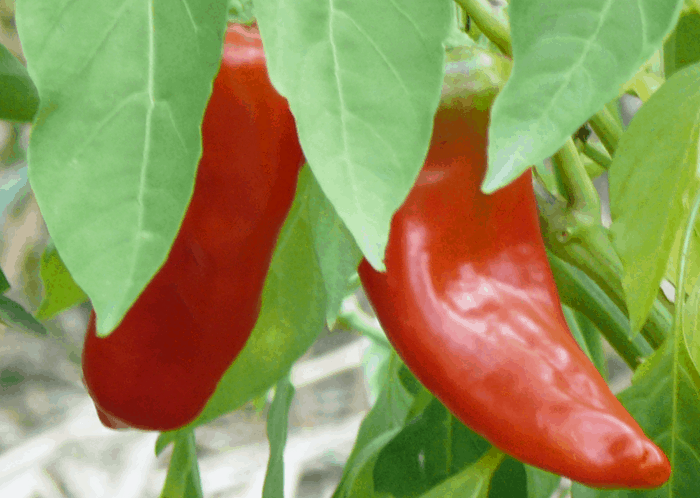 Long red peppers on the plant in October. 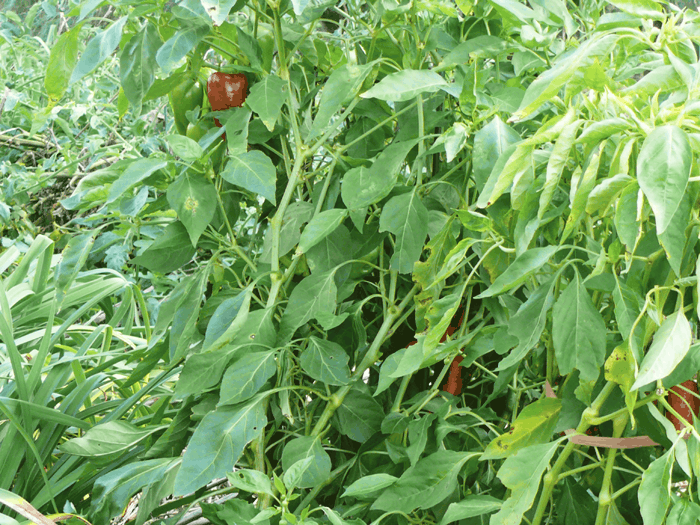 If you look closely you can count at least 6 red peppers and 4 greens.

This sheepnose pepper ripens earlier than the other red peppers. (about 75 days as opposed to 100).  I’ve only picked a few that were bothered with bugs. 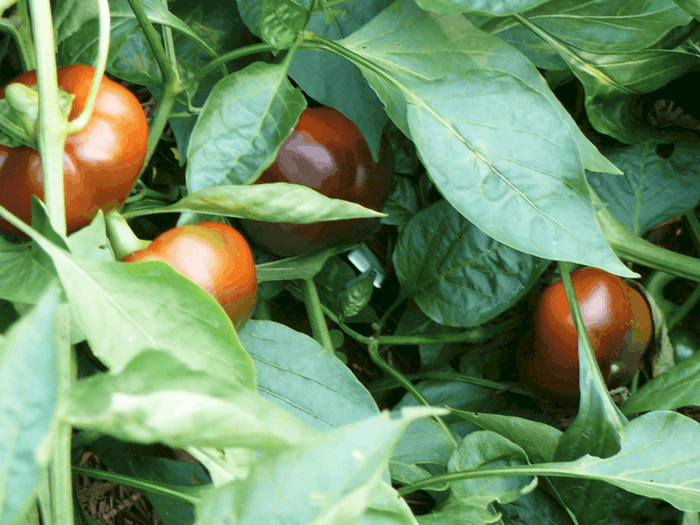 Sheepnose peppers ripening on the plant.

Vitamins and other good stuff

Those peppers highlighted the garden for me.  We had never been able to enjoy red peppers. (And I certainly would not eat one from the store because of high pesticide residue.) They were a dream of almost 30 years come true.  Instead of 3 or 4 green peppers a day for several months, we ate 4 or 5 red peppers a day. These thick walled peppers not only taste wonderfully sweet, but they are filled with Vitamin C and A, fiber and a lot of other good stuff. Low in calories too.

Another bonus – when you pick all the peppers before frost hits them, they will keep several weeks in the refrigerator —-thus, extending pepper season almost a month!

In the two years that I’ve grown them —-even with drought and unfavorable condtions —–I would highly recommend these peppers. 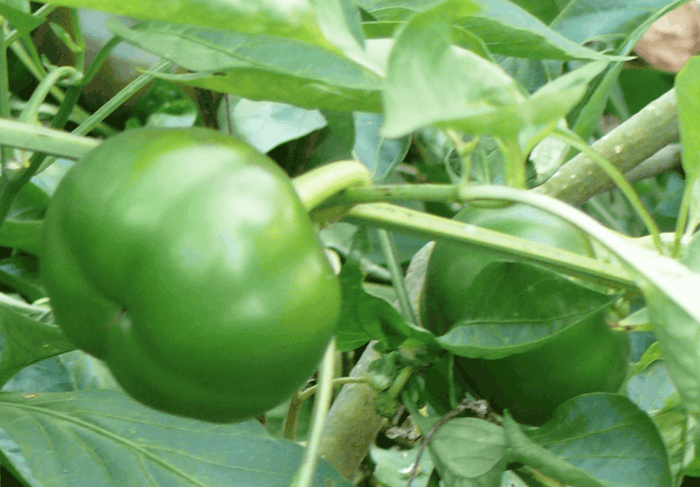 Sheepnose – Good eating when green, but more delicious and sweet when red.

Where to get it

The sheepnose pepper is a pimento pepper. From what I can find online, I suspect the sheepnose that my friend has is a hard-to-find heirloom from Ohio. J.W. Jung (non organic seed) and Seed Savers Exchange (organic seed) are the only companies I found that carry it.   Since they are hard to find,  I suggest you save seed from the peppers you grow so you will be sure to have them in years to come.  Make sure they’re heirloom (open pollinated) so the seed will come back true to the parent.  (Hybrids will not.)

Even though peppers self pollinate, they can cross-pollinate when bees and insects carry the pollen from one variety to the next.  You might want to grow one specific kind only.  Or perhaps you can grow two or three varieties, but keep them a good distance apart so they won’t be subject as easily to cross-pollination.

(I have found some peppers in my garden that I think may be from peppers that cross-pollinated last year. It alarms me only because I don’t want to loose the “true” sheepnose pepper because they are hard to find and may well become unobtainable from available sources.)

There are several varieties of pimento peppers.  Most of them are pretty good and you may want to try different varieties. Again – make sure they’re heirloom varieties.

Diane’s Flower Seeds carries a “Red Cheese Pimento” pepper that looks a lot like sheepnose.  Diane sells all heirloom seed so you’ll be good to go ordering from her.

You probably won’t want to give up bell peppers entirely, but you’ll really enjoy the difference these sweet red peppers make in your meals. Totally different flavor than green peppers (or bell peppers.) Good in just about everything!

I’ll give you a few simple examples of how they can be used before I close. You’re not limited to just these few examples. There are 100s of recipes online that are absolutely elegant and oh so easy that call for sweet red peppers.

Plan to add Sheepnose peppers to your garden next year.  I’ll bet you’ll never look back and you’ll never be sorry.

Some simple ways to use sweet red peppers: 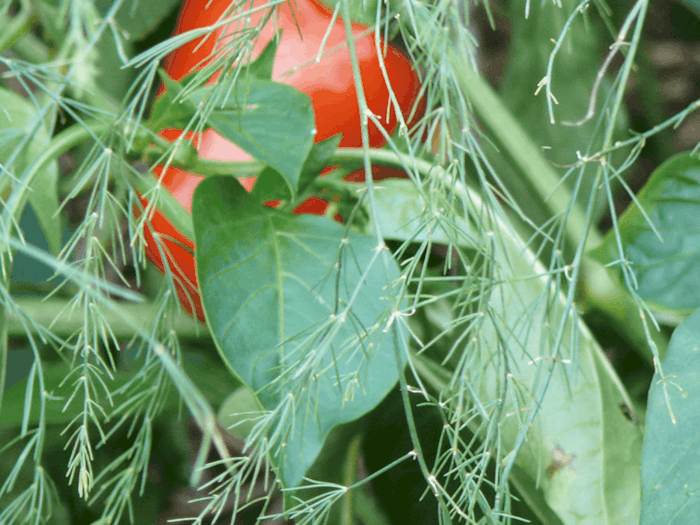 Beautiful red peppers. Easy to find even through lots of foliage.