I’ve grown English peas for almost 30 years.  I think Green Arrow are especially delicious, although I originally grew them because they’re short (24 to 30 inches) and the package said they didn’t need staking.

Staking brought to mind visions of time consuming work in preparing a trellis.  Because of that, I never gave thought to providing some type of support for my peas.

Then last year I decided to try something simple that I had read worked for someone else.  Every two feet in the bed planted with peas I pushed in a small branch that I had saved from pruning my hedges back in January. (Push them in several inches.)

By the time the peas come to maturity the branches are totally covered, but the peas stand up and won’t topple over. 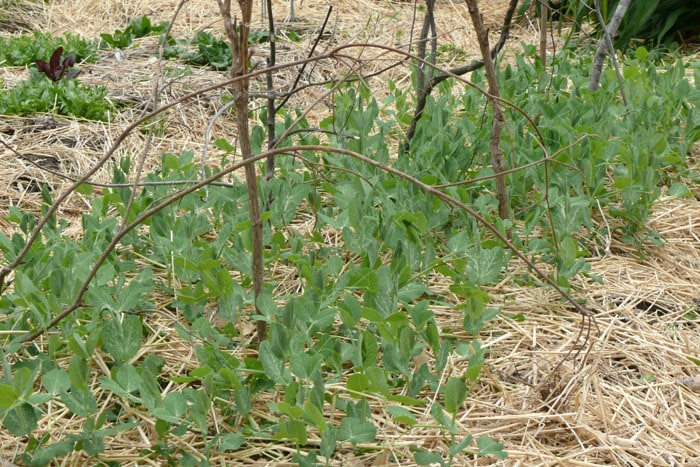 It can’t get much easier than using a stick every couple of feet. It works just as well as a fancier trellis.  The sticks will be totally hidden when the peas are mature and the peas will not topple. 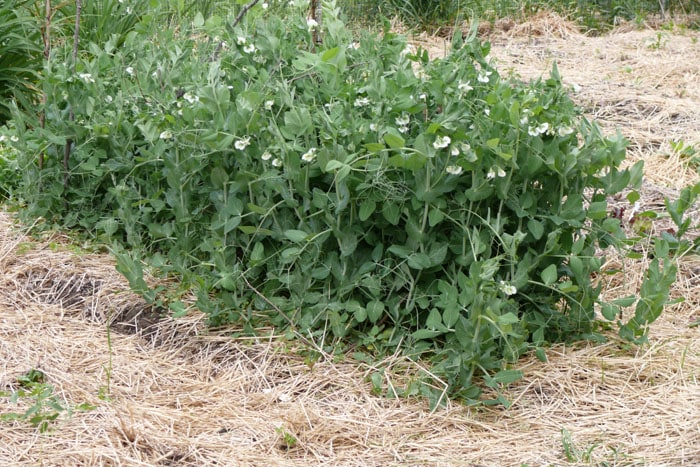 By the time they bloom the peas hide the sticks and are standing tall. If you look closely on the left you can see some of the sticks used for support.

Want to get Fancier?

If you want to get fancier you can.

We had some nice size bamboo poles on hand and Bill made the bamboo set up shown in the pictures below. We ran string back and forth to make a netting for them to grab and climb.

You see my bamboo support here in the top left of picture. It’s about 4 feet tall. The peas are a little over 2 feet tall. I ran string from pole to pole for the peas to climb on.

You can see the string in this picture is you look closely.

I also had two beds of peas with the sticks used for support.  Both worked equally well.  And although I think the bamboo support is nice, I wouldn’t want anymore in my garden than what is shown in the picture.

The beds of peas with the sticks look so pretty and there is no visual indication that the sticks are there by the time the peas are ready to be picked.

1. If you grow peas without support, you already know they topple.  That makes it harder to find the peas and the vines break more each time you handle them.

2. In addition to that the slugs and other critters that consider them delicious find it easy to dine when the peas are on the ground.

3. One of the most wonderful advantages to supporting peas in my opinion is how easy it is to pick them.  Much easier on the back!! That’s nice even if you’re in perfect physical condition.  But if you have any physical disability —-believe me — not having to bend over to pick is heaven!

4. The last advantage took me totally by surprise:  Increased yeilds!  I estimate that my yields have increased by as much as 20% on the beds that have support. Yes, there are many variables that could have added to that over a two year period, but I’m pretty convinced it’s mainly the supports.

So if you want to make life easier for yourself in the spring when you’re picking peas and try for increased yields as well, make a note to save some branches from pruning and use them to support your peas.

It’ll save some energy you can spend on something else that needs doing.