When I was a girl I thought of parsley as a garnish for a plate of food.  Later I regarded it as a cooking herb. I’ve  learned in the past few years that parsley is a storehouse of nutrients and an excellent food for good health.

It’s interesting that parsley has been in cultivation for more than 2,000 years, but was used medicinally long before it was consumed as a food. After a little research I can certainly see why.

Fresh Parsley from Your Garden

It doesn’t take long to conclude that dried parsley you buy in the store is of little value for taste or anything else.

If one is desperate for a small amount of fresh parsley – for garnish or recipe – they might find it at the store year round.  Even then it’s hard to tell if it has been irradiated or not. In any event, in no way does it compare to the fresh parsley you raise yourself. 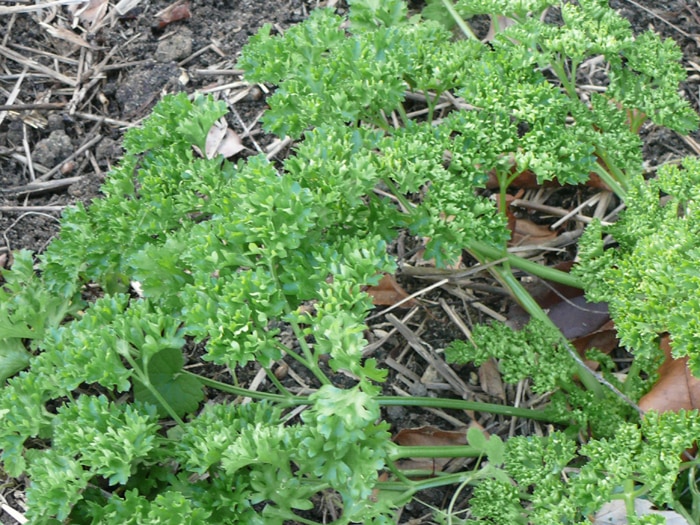 Curley Parsley in the Garden.

One or Two Plants are Not Enough (At least not for me.)

In years that I grew just one or two parsley plants in the garden, I lost them towards the end of the season from what appeared to be crown rot.  I was determined last year to have all the fresh parsley I wanted —  at least until a hard freeze would set it back.

So — I bought a package of the curly leaf parsley seed, started a flat of parsley and planted those babies all around my garden AND my flower borders. (I’m a believer in backup.)

It was great. I had all I wanted and used it in cooking soups, stews and sauces.  I put it in tabouli and pesto.  I put it chopped in butter for bread and potatoes.  I sprinkled it chopped on rice, spaghetti, and just about everything we ate. (Always add it at the last minute to keep it fresh.)

My plants are now under a blanket of snow, but before the first hard freeze I brought a lot in, chopped it, stuffed it into ice cube trays, added a little water to each cube and froze.  I put the frozen cubes in a air tight plastic bag and returned them to the freezer. Now I can easily get that fresh parsley taste for my soups and sauces by reaching into the frig.

The other variety flat leafed parsley (or Italian parsley) has a stronger flavor and is used frequently in cooking. I bought flat leaf by accident a couple of years ago and it reseeded prolifically. Most I pulled up, but left a few “just in case”. (It’s backup you know.)

Why you Might Want to Start it Each Year

Parsely has a two year life cycle (biennial). But you might want to treat it as an annual since the second spring it basically just sends up a seed stalk rather than giving a lot of leaf.

When to Plant Your Seed

Just so you’ll know, I started mine outside in a flat sometime in April and it took a few weeks to germinate. So to be able to use your parsley earlier— starting your seed inside about 8 or 10 weeks before the last spring frost is a good way to go.

Parsley is known for slow germination.  I’ve read tips about helping the seed to germinate faster although I have yet to try them.

(The idea is to cover the seeds since they need the dark to germinate, but don’t cover them so much they won’t come up.)

They need light once they germinate. If temperatures are warm enough during the day, put them outside in full sun. Bring them in when temperatures drop at night.

Overcoming Parsley’s Dislike of Being Transplanted

Parsley plants have a tap root.  Thus, they don’t care to be transplanted.  You can overcome this by various means. Here’s two ways.

All you need for free when they reseed.

Hopefully, my curly parsley that I started last year, will reseed in my garden and borders as prolifically as did its cousin the flat leaf parsley.  If it does — oh boy —- I won’t have to start any again —– I’ll transplant the seedlings as they come up.

A Bonus – Bring One in Next Fall

Plan now to pot up one or more of your many parsley plants next September.  (Watch you don’t break the tap root and use a container that’s deep enough. Six inches at least.)

Leave the potted parsley outside while the weather is still nice.  Maybe get it accustomed to lower light conditions by putting it in a spot that is a bit shadier.

You’ll have a plant that will, with proper care, be much larger than one just started for indoor planting.

Parsley – How to Add it to your Diet and Why