When I started growing Russian Kale a few years back, I was somewhat surprised at the deluge of harlequin bugs starting about June and into July. Boy, do they love Russian Kale!

Last year, although I hand checked and killed each day, the huge leaves looked so ratty that I finally decided to pull the plants and then plant more for fall when bugs wouldn’t be in such large numbers. From what I hear from readers, many take that same approach.

I planted again in the fall and the plants grew well and looked good, but they didn’t get as large as Russian Kale tends to get in the spring. I think I would have had more for the winter months if I had been able to winter over the larger plants from spring.

Attackers for This Year

My Russian Kale was attacked this year by the caterpillar that comes from the little white butterfly. (The same one that gets cabbage and broccoli.) In addition there were two other worms not identified. The harlequin bugs have only recently joined the party.

I was out last week doing my daily “check and kill” of bugs on the Kale and I came across what looked a lot like the cocoons of the braconid wasp that I’ve only seen on a tomato hornworm. There were a lot of them on the underside of numerous leaves and I wasn’t sure if they were really braconid wasp cocoons or not. I also saw some yellow ones.

After I Googled and found these two sites,  I was convinced they  were in fact the pupae of the braconid wasp.

#1 – http://aussieorganicgardening.com/2009/08/cocoons-on-brassicas/
#2 – http://www.pacifichorticulture.org/articles/braconid-wasps/  which mentioned that “Pupae: External cocoons are usually white or yellowish and fluffy.” 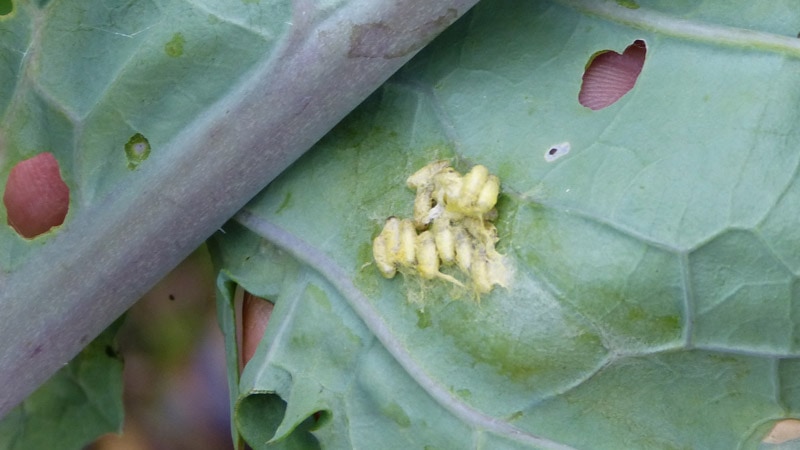 These are the yellow cocoons I found.  Obviously the caterpillar has already been consumed. 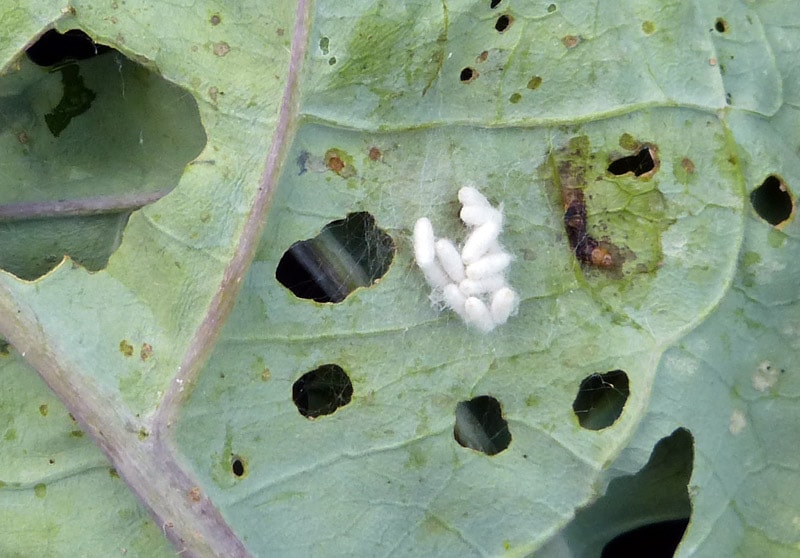 A groups of white cocoons. 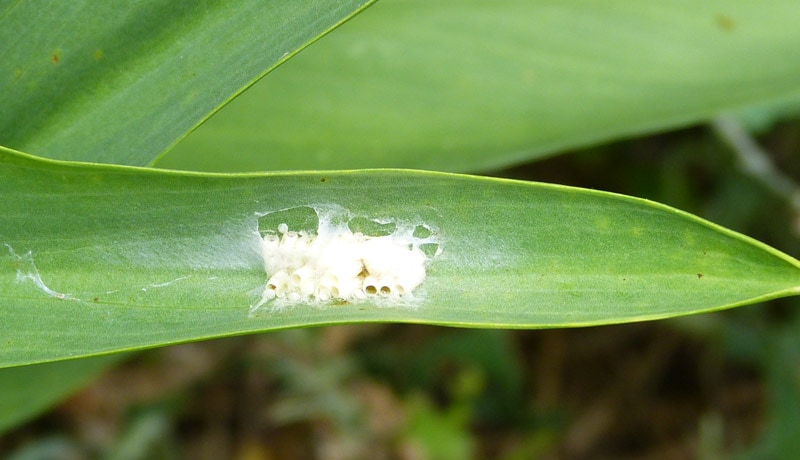 I found these empty cocoons on Calla Lily leaves that were right beside a patch of Russian Kale.

They next day, I found even more convincing evidence: The cocoons were on one of the caterpillars on a leaf of Russian kale! Those little caterpillars don’t hold a candle in size to the hornworm, but nonetheless the braconid wasp had found them, laid its eggs, which obviously had hatched  and there were the cocoons of the pupae on the caterpillar.

A picture of that with this post would have been priceless, but by the time Bill got out to the garden later in the day with the camera, I couldn’t find the caterpillar with the cocoons.

Last year (as always) they took care of the tomato hornworms for me, but for some reason I didn’t have their help (to my knowledge) with these caterpillars on the kale last year.

After seeing all this, I decided to change my strategy with the kale.

The kale plants have huge stalks that look fine. I cut off the leaves that looked really eaten up. I left those that were not too bad. 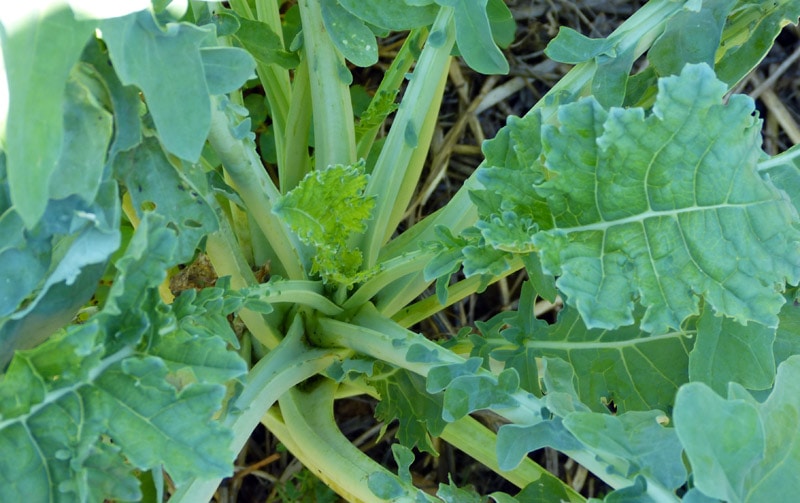 I had cut a lot of the badly damaged leaves off this Russian Kale plant previously. Now I’m seeing lots of new growth that is undamaged.

The bug invasion on the kale will soon be over due to the changing of the season, the braconid wasp, and my daily search-and-destroy task. I already see signs of the kale renewing itself with beautiful new leaves. So I should have some fully mature Russian Kale as well as newly planted kale to go into fall and winter.

It will be interesting to see how this little braconid wasp affects the number of caterpillars on my Russian kale next year. I’m delighted to have them helping me.

I put this post up July 25th. After that my Kale made a strong comeback. It really looked great, lush and full with no bug eaten leaves.

Then about mid August, things took a turn for the worse. Within a matter days I had lots of the worms on the back of Kale leaves. All plants at various places throughout the garden were quickly eaten. They were far worse than they were earlier in the season.

It seems to me that if in fact those pictures in the post were of cocoons of Braconid Wasp, I would not have had this sudden invasion of worms (caterpillars).

If they were, instead, eggs of a one of the moths that lays eggs on back side of Kale leaves, that would certainly account for what happened.

I did about 30 minutes of looking around online. Didn’t find the information I was hoping to find to give me something definite. Even the pictures I found that were suppose to be the eggs of the cabbage moth did not look like what was on my kale leaves.

If I don’t come up with more information by next spring, I’ll have to rethink whether or not I’m going to allow these (cocoons or eggs?) to remain on the Kale. Or maybe I’ll just remove all the Kale from the garden when the invasion starts. (Not what I want to do!)

I even thought about taking one of the Kale leaves (next spring), putting it in a jar (cover the top with cheese cloth), and see what results.

If you know of anyone knowledgeable about this, I hope you’ll ask and let me know what answers you get. Anything we can find out, will help us all to make a decision next year. If they really are the braconid wasp cocoons, I sure don’t want to dispose of them.

Defense Against Garden Pest and Disease

Hornworms – Why you might Need a few in Your Garden

Herbs – A Perennial to Attract Beneficials to Your Garden