As I’ve said many times over the past six years when writing for TMG, healthy soil consistently enriched with organic matter is first and foremost in guaranteeing the success of your garden.

Healthy soil feeds our plants, and it helps protect them from diseases and pests.

Plants grown in poor soil that don’t have good soil life to help them be healthy, literally put out signals that call to and attract the bad bugs.

Does Healthy Soil Guarantee No Pests?

I’ve heard and/or read of some pretty well-known gardeners who have indicated that you won’t have any pests if your soil is healthy.

I certainly would not argue with the fact that the more your garden soil improves, the less problem you’ll have with bad bugs.   I’ve experienced that first hand over the years in my garden.

But not having ANY bad pests will depend on more than just soil.

Temperatures and rain fall can make a huge difference in the number of pests that visit your garden.

Rainfall here this year has been just about perfect except for maybe 3 weeks.  And, except for an extremely hot day, temperatures stayed pretty moderate until mid July.

I’ve been amazed at the difference these two variables caused in my garden this year.

Usually, Harlequin Bugs start dining in my garden in June. The various cabbage worms join them and make lace of most of the previously beautiful kales and chards.

These guys didn’t even put in an appearance this year until mid July and the numbers are no where near what they were last year!

It has only been this month that the chard has started looking horrible.  I’ve cut most of it back and hopefully it will make a comeback as the weather cools.  The volunteer kale seedlings are just last week being attack, but I feel confident the stronger plants will make a come back. (I’ll thin the weaker ones.) 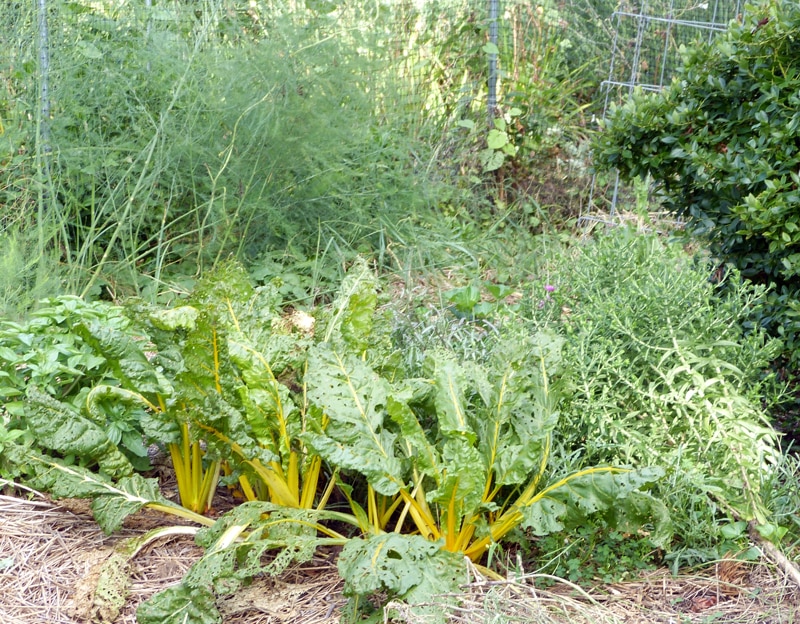 Chard is looking pretty shabby, but should make a come back when the weather cools.

Also noticed that the harlequin bugs have dined on arugula plants in one section of the garden, but haven’t touched the arugula in other sections.

Years ago, potato beetles were so numerous in my garden I had to “search and destroy” 3 times a day. I hated it!  In recent years, I don’t have many at all.

This year I only saw a few adults and a few clusters of eggs and maybe a dozen larvae.  They didn’t show up until late June and I killed those.

Today, I was very surprised to see last-stage larvae on a “finished” potato vine.  I killed those and made a note to check for the beetle next year when my volunteer potatoes come up in that area.   I don’t know if I missed any of the larvae, but if I did the adults will probably stay in that area and winter over. 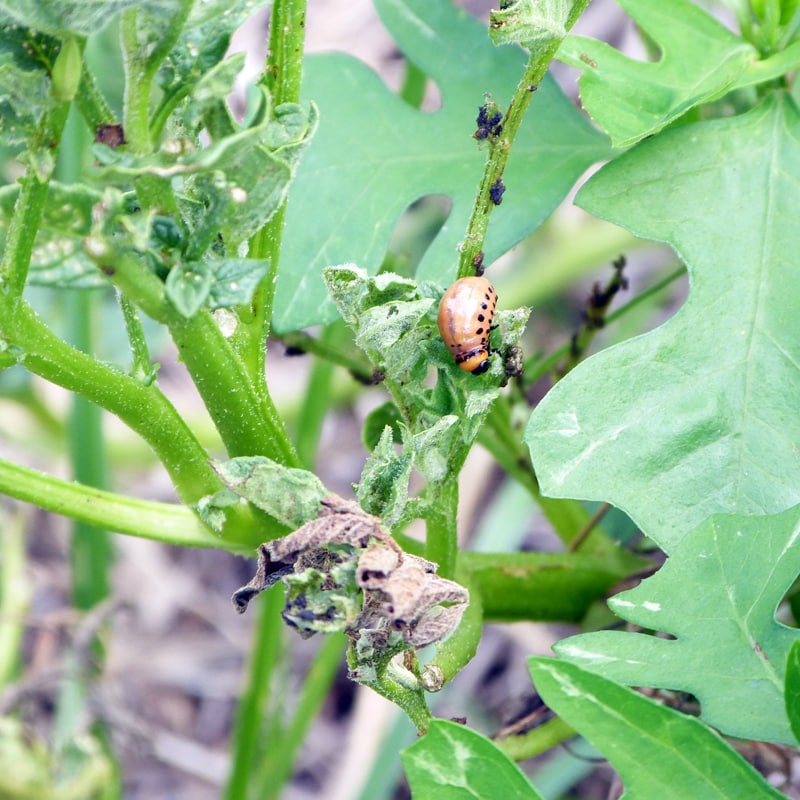 In prior years I’ve always planted about 40 tomato plants.  I’ll usually see a total of about 3 or 4 horn worms. By the time I see them they’re usually already covered with the white cocoons that look like grains of white rice.

The tiny braconid wasp lays eggs inside the horn worm.  When the eggs hatch the larvae eats it’s way out and spins these little cocoons which will hatch the adult wasp.

These little guys must get these worms pretty quickly because they don’t do enough damage for me to notice them quickly.

This year I only planted about two dozen tomatoes.  I was surprised a few weeks ago to see 3 hornworms without the cocoons.  I killed them.  That evening it occurred to me that I may have been too hasty in doing that.

The worms were not active which would indicate they had already stopped feeding and had been paralyzed by the eggs inside of them.  By my killing them, it probably stopped the process and thus, my garden lost the benefit of all those braconid wasp that would have hatched to help me with pest control.

You gotta have some bad guys so the good guys can multiply.  Everything in nature is balance.

I resolved not to kill anymore if I found them.  And surprisingly, I did find about 6 (with the cocoons) more making the total of horn worms this year about 10; 6 more than what I usually find. 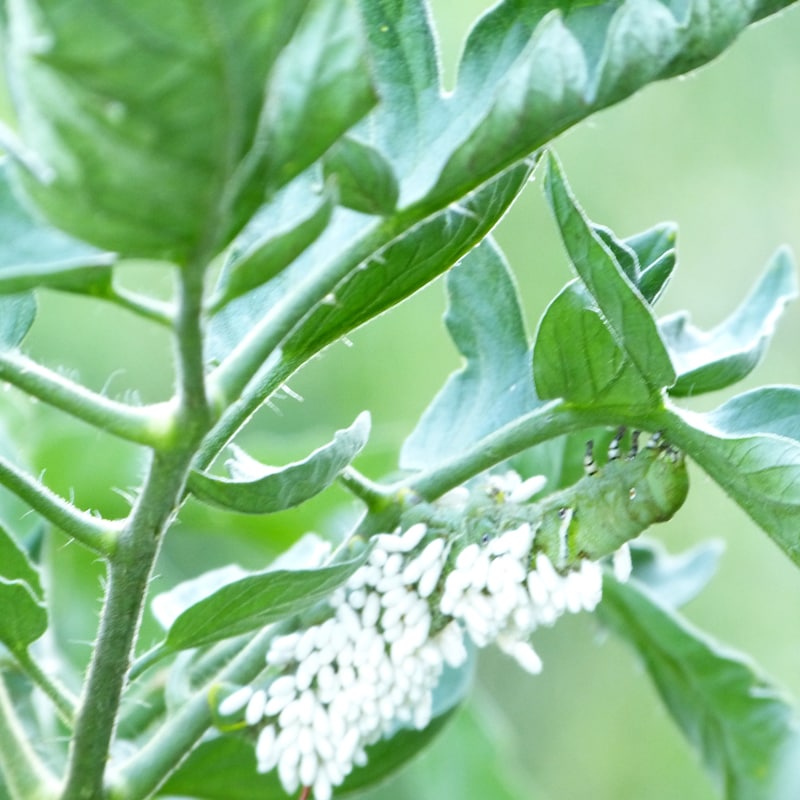 Hate the squash vine borer!  Never seem to see signs until it’s too late.  Had a zucchini squash that was a gigantic plant one day in June and dead as door nail the next.

After that I planted yellow squash and kept it covered with light weight fabric until it got pretty big.  Took the fabric off so the blossoms could be pollinated.  (I’m very seldom in the garden early enough to pollinate the blossoms myself.) 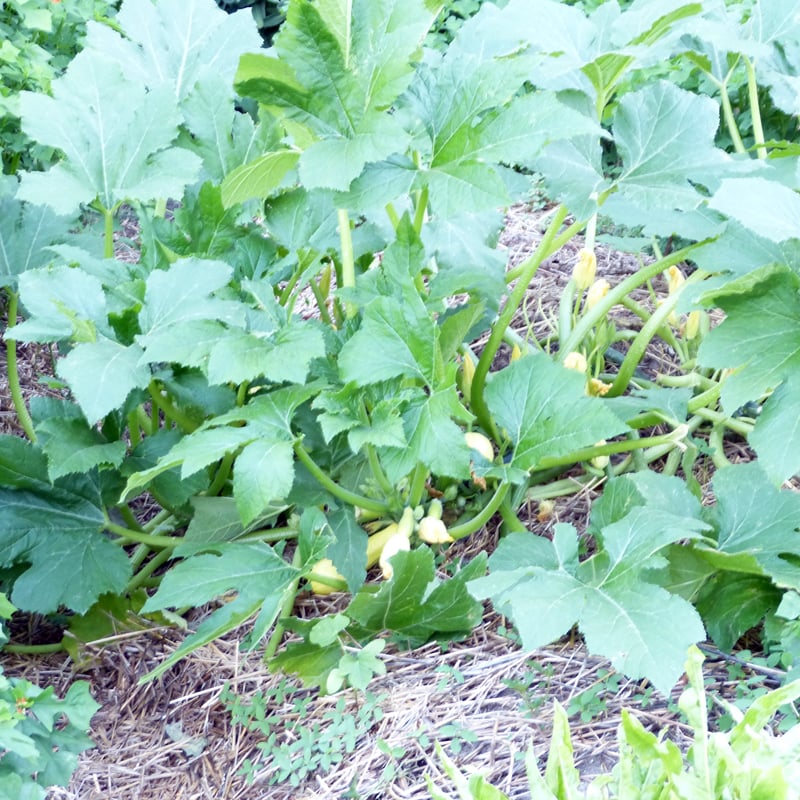 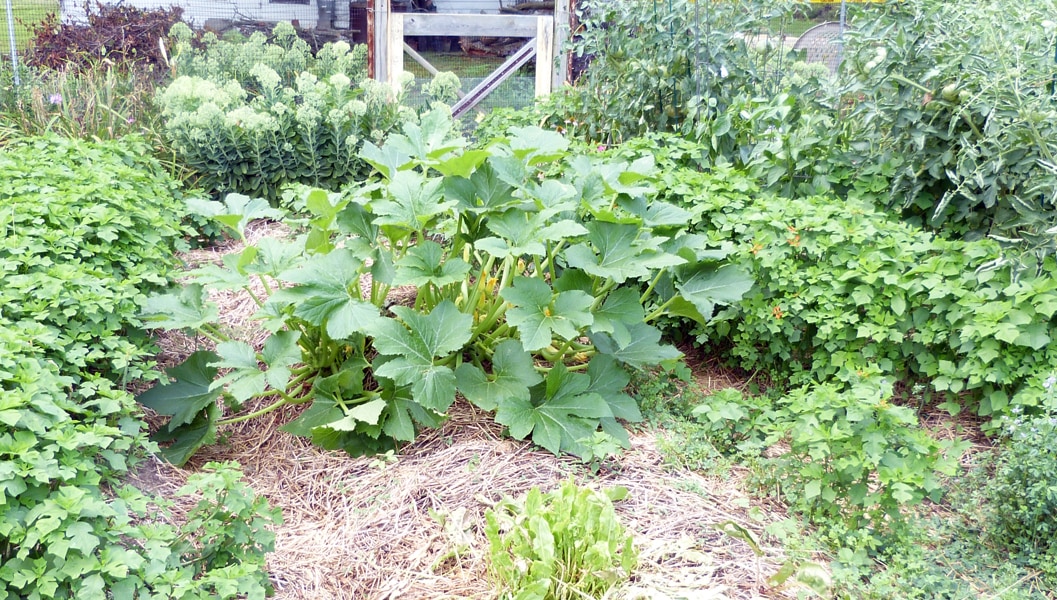 Just yesterday found signs of the borer on one smaller stem, but the main stems look great.  Hope that will continue because I’m getting beautiful squash.  One or two medium squash every other day.  And they’re delicious!

These bad boys didn’t even make an appearance in the garden until mid-June on the zucchini I mentioned above.

Didn’t see any on my yellow squash until about the end of July.  Have killed a few adults daily and have torn the egg clusters off the leaves.  Have not see any hatched.  (Great news assuming I didn’t miss any!)

My cucumber plants are gigantic and I’ve only seen one squash bug on them.  That makes me happy!

And yes, the braconid wasp is said to lay eggs on squash bugs. I’ve never seen indication of this in my garden and would not depend on this little wasp to keep squash bugs at a controllable number. 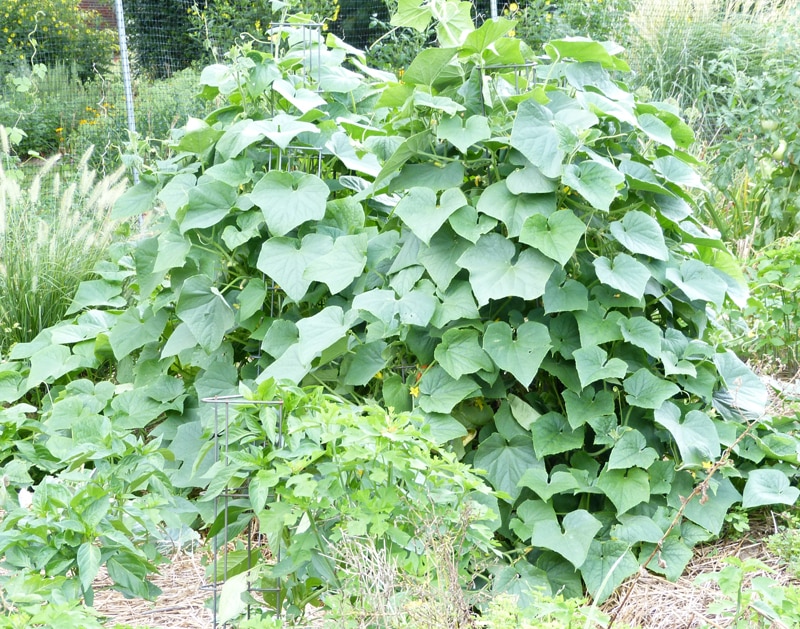 They’re out there, but not in large numbers.  As you know, they spread that wilt disease and that’s usually what finishes off my cucumbers.  As a rule, by mid-August cukes in my garden are on their last leg, but as of today they still look great.

No where near as numerous as last year. I see them mainly on tomatoes. About one per plant when I check each day.  I’ve seen a few on the cucumbers and a few on the asparagus ferns.

Very controllable this year.  Not too many.

It’s been years since I’ve had any noticeable holes in the leaves of snap beans from bean beetles.  This year I did.  Didn’t see the beetle until just the past few weeks.  The beans are doing great; they just have holes in the leaves.  I can live with that. 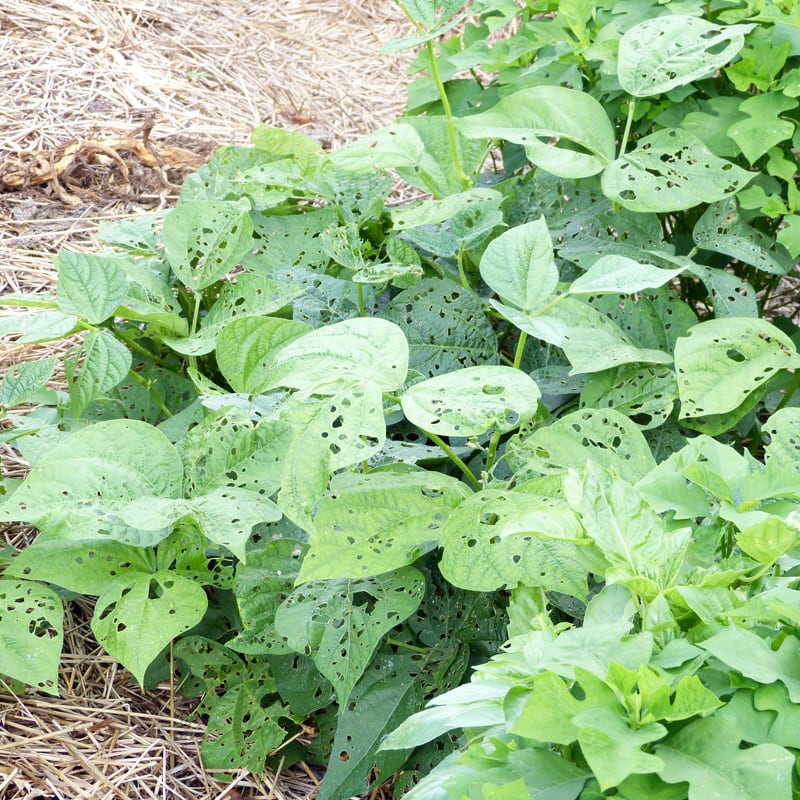 Beans with holes in leaves – August

No noticeable damage from slugs or snails even with all the rain we had.  And as you know, I have lots of mulch. (Many folks think mulch is the cause of slug damage.  It’s not.)

Plants that are stressed will signal to and attract bugs.  Although healthy soil is your first line of defense, keep the other variables in mind.

Extreme temperatures and uncovered soil can cause conditions that promote stress for your plants.

Lack of rain fall for a long periods of time can stress plants.  If you have the means to water and have water free of chemicals, you may be able to prevent this stress.  If you’re over watering or watering with water that has chemicals (public water) you’re probably exchanging one stress for another.

And last but not least, your daily “search and destroy” duties can make a huge difference in not allowing pest populations to build.

How are the bugs in your garden this year?

Discrepancies in ids/Hornworms/ eggs or cocoons

Hornworms-Why You Might Need a Few in Your Garden

All content includes photos is copyright by TendingMyGarden.com. All Rights Reserved.