In past years, my transplants from Dixondale would be arriving this week and I’d be out there in mid-February starting to plant at least 750 of my 1500 to 2000  onions.

I’ve always planted onions earlier than most folks in my area. That extra growth time really helps.  By the time the right amount of daylight hours trigger bulbing, they have a good root system established and good top growth to help them mature.

Onions go dormant when temperatures fall below 45 degrees and start growing again when it warms.  It’s said by folks with authority (like Dixondale Farms – the largest grower of onions in the world) that if this happens more than twice it will likely result in the onion bolting.

In most years that I remember here in Virginia, it’s cold with temperatures into the 20s, but it doesn’t usually stay that way very long.  It’s always a back-and-forth thing.

This year has really been something we’re not use to with cold temperatures in the teens and single digits for long periods of time.

My onion transplants won’t arrive until the first week in March this year. Can’t tell you for sure just why I decided to do that.  It was just a gut feeling. I’m not sure if it was because I knew I couldn’t get the onions planted in February because of being pressed for time getting the book to the printer, or because of the severe cold we’ve had this year.  Maybe a bit of both.

I have 3 onion beds ready for planting and did not complete preparation of the others.  Still have that ahead of me next week.

According to the Almanac it’s going to be topsy-turvy weather this spring. It will be interesting to see what happens.

Regular readers will know that I don’t have any grow lights or any place inside to keep seedlings. When I start seedlings inside in the winter I’m limited to the space on top of my washing machine.

Usually once things germinate, I seal the jugs and they go outside to remain there 24/7 until transplant time.  That’s the only way they’ll get enough light to do well. When temperatures fall, I put my make-shift cold frame over them for additional protection. 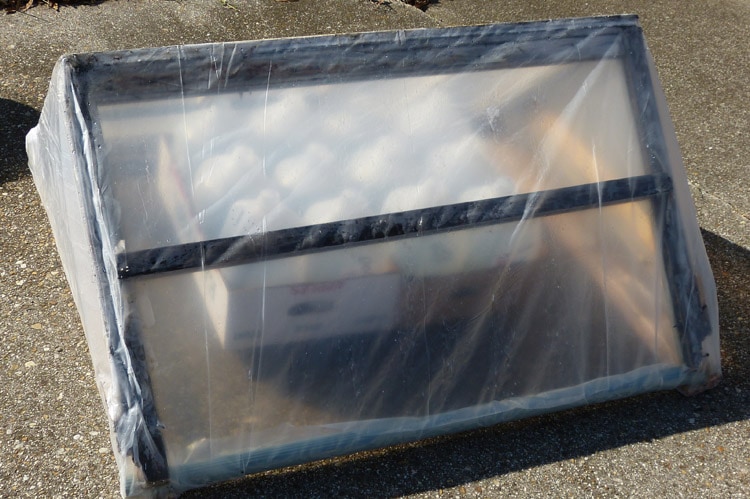 I put 6 jugs in each of the cut-down boxes.  The two boxes fit on top of my washing machine at night.  Here I have them under my make-shift coldframe.

Seed starting took a back sit to the technical issues that came up when I was trying to get the book ready for the printers.  I did manage to get 12 jugs prepared and planted with onion seed on January 4th, which was about 10 days earlier than planned.

Most of my seed was for last year (2013) but I still had great germination and robust growth. The seed for Yellow Sweet Spanish and White Sweet Spanish seed was 2011 and 2012 seed. Most didn’t germinate, but I got a few.  Percent of germination for onion seed goes way down after more than a year. 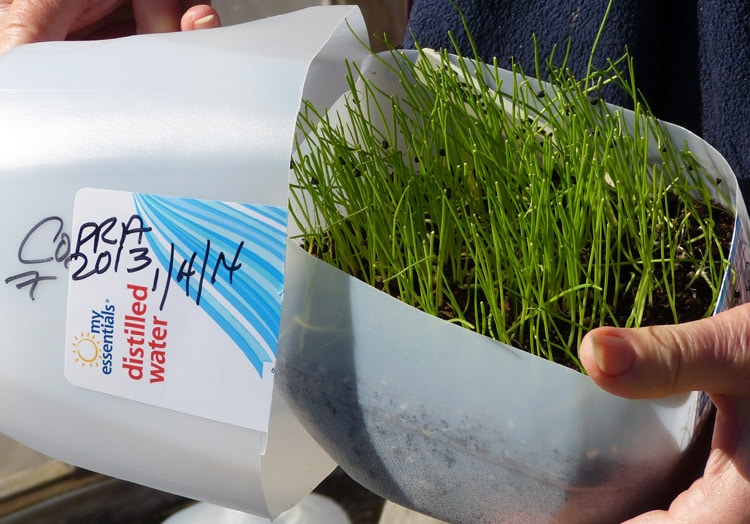 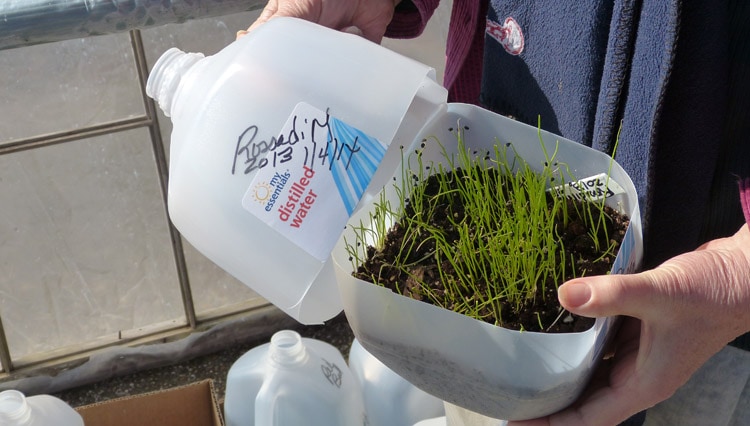 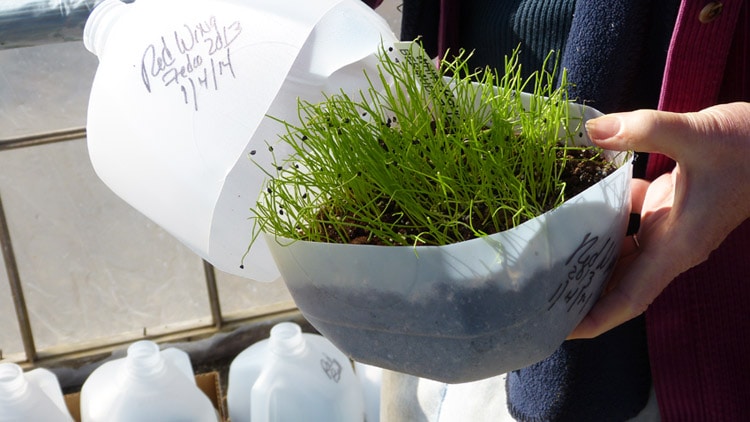 Seedlings Have to Have Light

Once germinated the seedlings had to go outside to get light needed for growth.  I did bring them in at night since I didn’t want them to go dormant, but to continue their strong growth in preparation of transplanting to the garden. (Even with a strong root system when they’re transplanted, they take about 30 days to really adapt to their garden home.)

By the first week of February all the seedings were up about 6 inches and I trimmed all of them back to about 2 inches with a pair of scissors.  They’ve grown to about 4 or 5 inches again. So as you can tell, growth is vigorous even though the conditions have been less than ideal. (Update – I stopped trimming seedlings after year one or two of growing from seed.  It’s not necessary.) 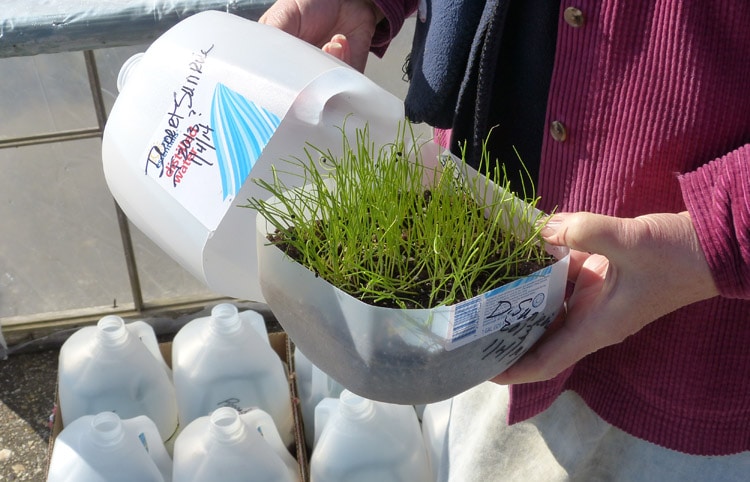 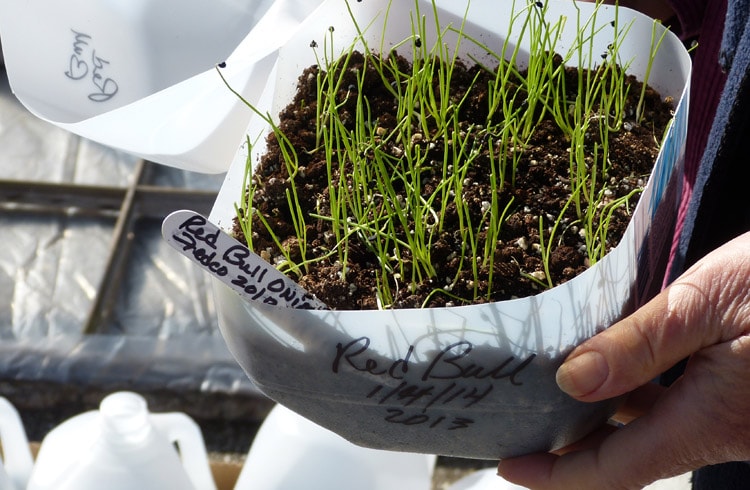 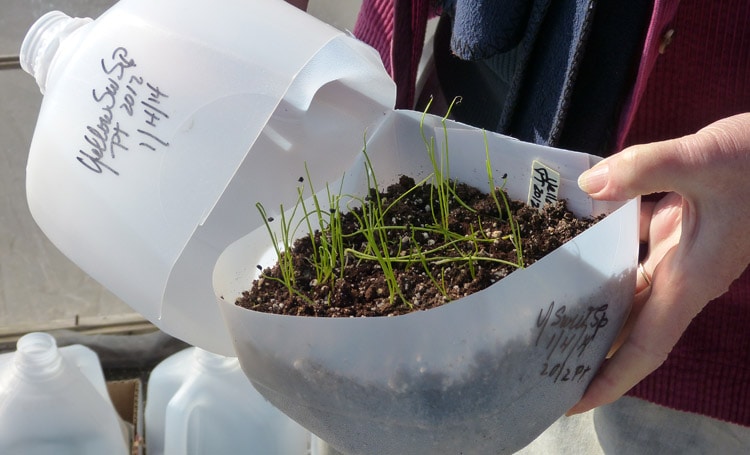 I’ve never wanted to grow leeks before, but decided to give them a try this year.

I’m not sure I want to plant all these because they’ll take up valuable onion ‘real estate’.  But maybe I can find some room in out-of-the-way places to plant enough to give me an idea.

They’re suppose to like regular watering, but  I’m not saying a word to them about it!  Maybe they’ll do well anyway. 🙂 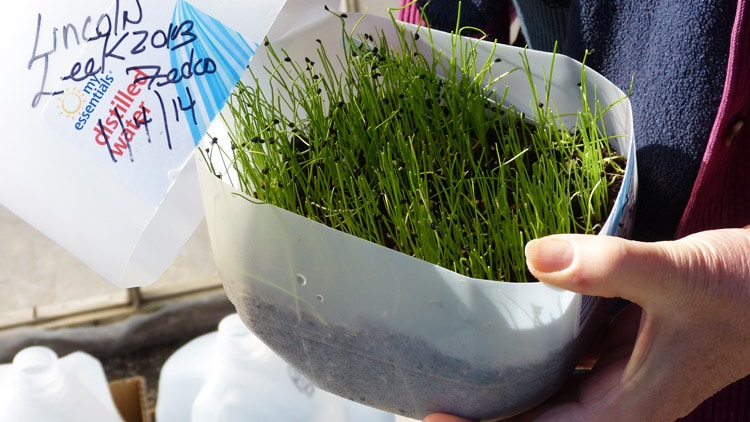 A Few Perennials Wintersown at the end of December

I managed to sow a few jugs of perennials.  The two jugs in the picture below have asclepias seed (also called milkweed or butterfly weed)  in them and have been taking care of themselves outside since planted at the end of December. 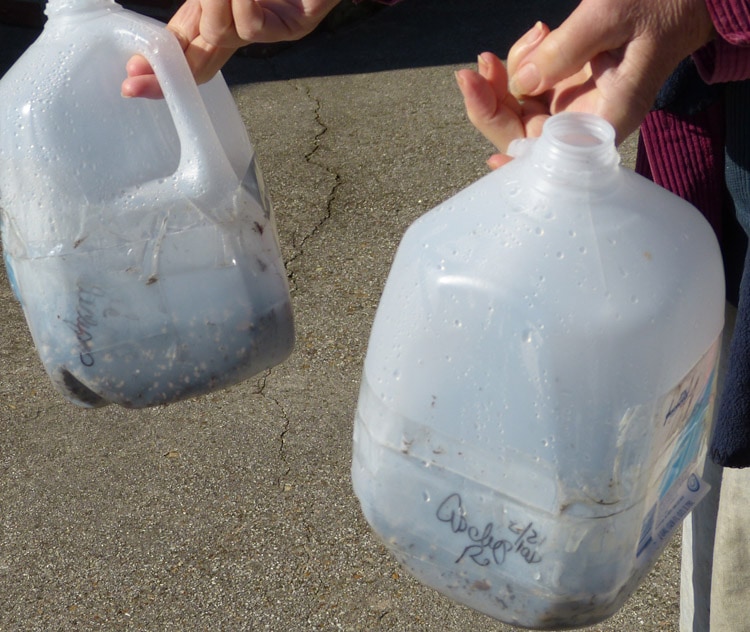 The birds are already telling me that it’s time for spring.  The earth is filled with energy as it prepares to begin growth.  Man’s new year begins in the dead of winter, but the new year according to the earth’s schedule is about to begin.

Let’s get ready for it!

Wishing you every success!

Growing Onions from Seed       At the end of this post more than a dozen other posts on onions are listed.

Wintersown-Answer to questions about seeds and transplanting

You Can Plant in December

Looking at Winter Sown Seedling and the Garden

Winter Sown – Another Plus

Seed Starting – It’s Easy Even with Less than Perfect Conditions

All content including photos is copyrighted by TendingMyGarden.com.  All rights reserved.