Those peppers that only grew 6 inches and stayed 6 inches until about mid-July ended up growing 5 to 6 feet tall and producing lots and lots of peppers. Finally by September, I was getting beautiful and delicious red peppers. I rationed us to two a day, but we’ve eaten 2 everyday for more than 60 days. And they’re still coming. (I use several green peppers each day from my California Wonder plants and let the Italian peppers turn red.)

If I can get my peppers through the first frost or two, we should have some more nice weather before the real cold sets in and I can increase my pepper harvest by well over a 150 peppers. They won’t all be at the stage of turning red unfortunately, but the green ones that I freeze will be great for stir fries in the dead winter.

An eggplant, that was the worse looking plant in the garden, didn’t even have a blossom until the end of August. I just picked a large eggplant (one of 5) from it today for dinner tonight.

Wrap or Cover for Protection

I’ve spent a few minutes of the last few days covering my peppers and eggplants with row cover fabric in preparation of the frost that is forecast for Sunday night. And I still have 3 more peppers to cover as I write this.

It’s far from a perfect job.  I secure the fabric with good quality clothespins.  So far, they’ve held even with the 30 miles an hour gusts. If gusts get more severe they may not. 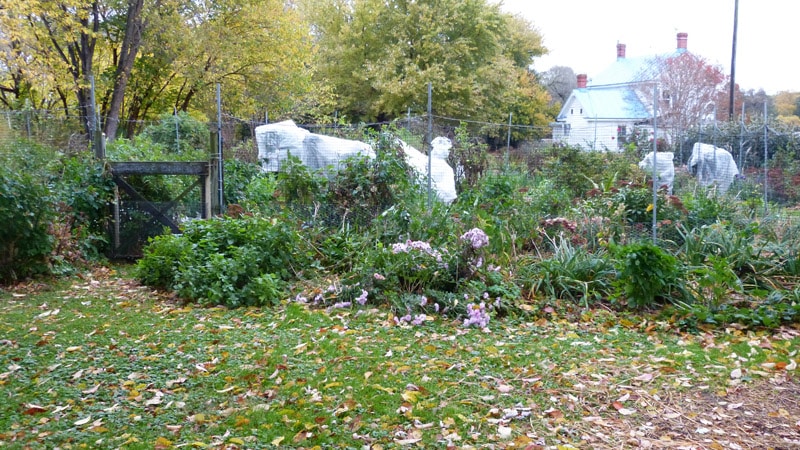 If you don’t have row cover fabric you could use a light comforter, bedsheets, blankets, or a tarp. Just remove them in the morning. (Once I cover plants with row cover fabric, I leave them covered unless it turns really hot.)

You mainly want to cover the leaves and fruit. Frost won’t kill the main stem, but will kill the leaves.  Also, temperatures 32 degrees F and below effect the quality of the fruit. Even if they don’t wilt and get soft, they still may not store as long as usual. 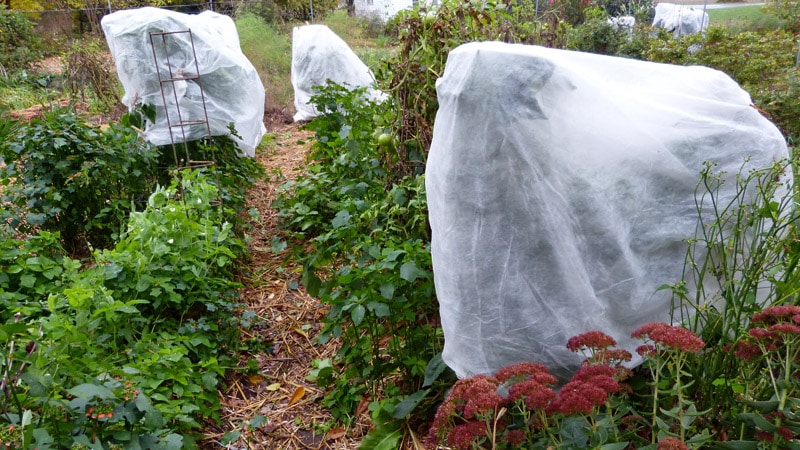 This path is directly in front of me as I enter the gate.  Small patch of peas is blooming to the left of the path.  Peppers are covered  Eggplant is covered  (top middle).  Tomatoes are looking shabby. Nov. 1

Temperatures Often Fall Below What is Forecast

Although the forecast only calls for a low of 37 degrees, the temperatures can sometimes fall lower. And although I’ve seen peppers survive a light frost, it’s chancy. I don’t think the eggplant would survive without some type of protection. Sometimes tomatoes do and sometimes they don’t. 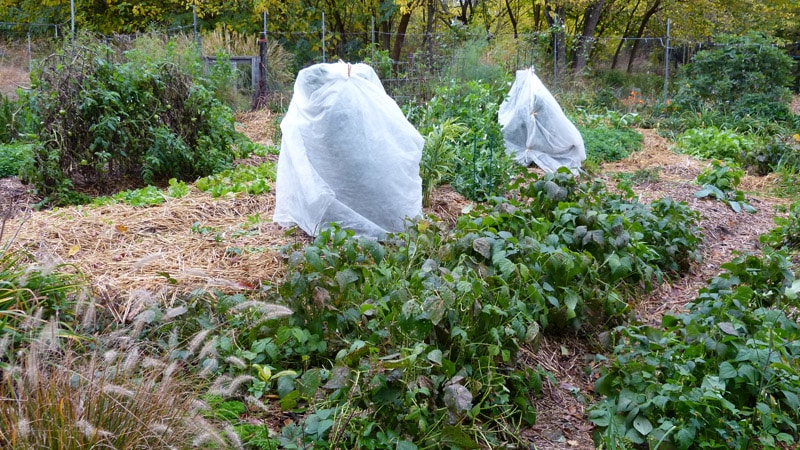 Cold Tolerance Can Depend on Conditions

My gut feeling tells me I probably don’t have to worry about loosing the peppers this week for various reasons. 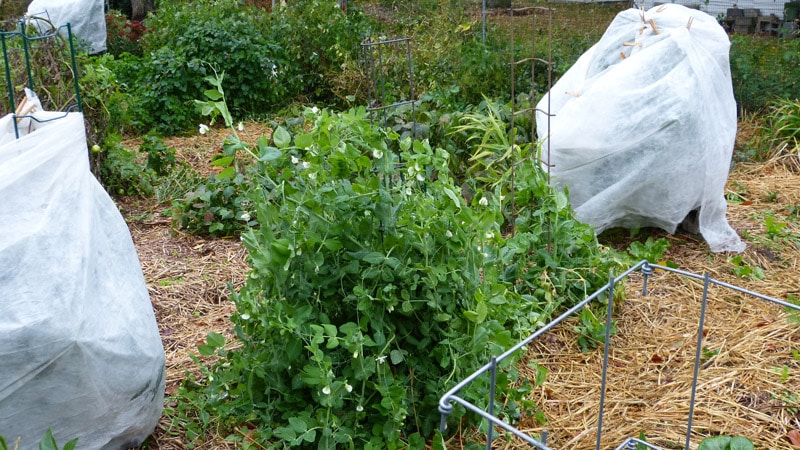 More peppers covered.  Small patch of peas at the top end of the garden. They can take the frost. Nov. 1

I didn’t cover my tomatoes this year, but I think most will make it through tonight.

I already have about 150 (fresh ones – red, pink, and/or green) in my unheated enclosed porch. I’ll harvest several times before the next  frost is forecast, IF the fruit is not damaged by the frost tonight. Sometimes tomatoes look ok after a frost and you don’t know they’re bad until you get them inside and they turn soft and rot.

Notes on Other Crops in my November Garden

In the coming weeks I’ll be putting up the tunnels for my cool weather crops and getting ready for winter.

Hope you are still harvesting and planning to harvest cool weather greens throughout the winter and into spring.

Let me know how you’re doing.

All content including photos is copyright by TendingMyGarden.com  All Rights Reserved.