In spite of all the advice about how to grow onions (or any other crop) many gardeners still struggle to be successful.

This time of year especially, articles on adding nitrogen abound.

Nitrogen and The Promise of Bigger, Better, Faster, and Greener

Any one of numerous “catchphrases” with the promise of bigger, better, faster, and greener are used to get a gardener’s attention, making them wonder if they need to add nitrogen.

Some articles are simply worded. Others get complex and might even explain the nitrogen cycle for those who want more “scientific” details.

As I mentioned in my most recent private email to subscribers of TMG there’s just one problem with many things you read: They usually don’t tell you the whole story. (Often it’s because they don’t know it).

But you can almost bet there’s always more to it.

An example that makes the above point, is the article that tells you how “—plants need a large amount of nitrogen to grow properly”. (Bigger, better, faster, greener.)

“Large” is not really explained. They leave that to your imagination.

Although most plants may need nitrogen throughout their lives, every plant has it’s own special requirements for the amount needed and when it’s needed. If you leave it to nature, the nitrogen in your soil will be “available” to your plants when the weather and the time is right. (I’m so glad I don’t have to figure all this out myself.)

It’s said that one of the most common mistakes gardeners make is supplying nitrogen that’s in excess of the plant’s needs. Plant growth can be so rapid when this happens that plants don’t have the time to “build” other supporting systems. Plants are stressed and often weak.

This is one of the most common causes of attack by aphids.

How Things Got Complicated

Fortunately for those of us who work with nature things are pretty simple.
We don’t have to know all the “scientific” details because nature handles all that for us.

All this “complication” only became necessary when the chemical industry came on the scene in a big way about 125 years ago. Over that 125 or so years they’ve had the money and connections with government to make most of the public think that one can’t farm or garden without their products.

That’s unfortunate because it’s just not true. The damage that modern agriculture has done in the past 50 to 75 years with it’s chemical fertilizer, pesticides, destructive plowing, monocropping, and overgrazing is catastrophic. The good news, if mankind would take action on it,  is the damage could be (at this point in time) reversed by actually using the principles placed in nature for farming and gardening.

The Basis for Most of the How-to-Grow Information

It’s important to keep in mind that most of what we read about how to grow something is based on growing things in depleted soil that result from modern agricultural practices.

Things can get pretty complicated when you set about trying to create an environment for growing from chemicals (either in depleted soil or via the hydroponic method) rather than using the simple principles that are already in place and have worked to produce bounty from the earth for millennia.

If you’re gardening with nature, covering your soil, and returning organic residues to the soil each year, you shouldn’t have to add any nitrogen to your soil. (When I make broad statements like that one, I’m always aware there will probably be an exception to the rule. But I would bet it would be rare.)

How the Soil Gets Nutrients

Nitrogen and other nutrients are added to our soil through decaying/decayed organic materials. (Mulch, crop residues, cover crops, etc.)

Richard Parnes, noted soil scientist, ran the soil testing facility at Wood End Laboratory in Maine years ago. Research there led to a book first published in 1985. The book was updated for the 3rd time in 2013 and is now entitled Soil Fertility. (You can read it for free online.)

Mr. Parnes pointed out when you mulch continuously you can assume a carryover of nutrients. He goes on to say that all the nutrients are usable “except for leaching and nitrogen losses which are small.”

I mention this because nitrogen loss from leaching is one of the things used to get your attention by advertisers. The way most articles are written it makes you think that if you’ve had a lot of rain you automatically need to add nitrogen.  And while that may sometimes be true, it’s not often true as Parnes pointed out.

Another catchphrase that is currently popular is “Since there are so many factors that affect nitrogen loss, you might need a soil test to determine how much nitrogen you should add.”

I only remember two things from instructions on how to take soil samples:

Soil samples (often more than one) need to be collected at certain depths depending on the soil. Also, samples should be dried or refrigerated as soon as possible to stop soil activity from changing the nitrogen levels.

Even after following sometimes complicated instructions to the letter,  Mr. Parnes points out that a soil test is not always the solution. Different labs have different procedures of determining things that may or may not be a suitable way for other locations. Not to mention it’s probable that the soil test won’t tell you everything you need to know anyway. (More about that in the last paragraph of the section below.)

Throwing Off the Delicate Balance of Nature

Nature makes it easy for us with simple principles like replenishing organic material in the soil. She does all the delicate balancing for us.

When we add things without knowing what we’re really doing we can throw off the balance.

Even Mr. Parnes who worked for decades offering recommendations to farmers for organic fertilizers stated, “—the idea of being able to calculate fertilizer application with any hope of certainty is an illusion. At best we can apply what we think is necessary” and then be prepared to adjust as we go.

In addition to replenishing the nutrients in the soil, organic material does other wonderful things in the process. It creates soil that drains properly, but at the same time holds onto water.

AND it literally decreases the plants need for water!

The abuse of conventional agriculture has left the majority of the world’s soil with no organic matter. These depleted soils can’t hold water or nutrients. And although artificial chemical nutrients are promoted as being the solution, they’re not. They just make matters worse.

As Mr. Parnes stated in his book it is “the energy from organic residues that is required to maintain soil fertility and there is NO substitute.” (emphasis mine)

Do These Onion Transplants Need Nitrogen?

I received a newsletter April 6 from an onion transplant supplier about the importance of nitrogen to your onion crop.

Here’s how they described the easiest way to determine if the onion plants have enough nitrogen available: The leaves of plants lacking nitrogen will have a pale green to yellow appearance.  If they’re not growing that’s also an indication of nitrogen deficiency.

They don’t mention it in the article of course, but these symptoms can be caused by other things as well as a nitrogen deficiency.  For instance:  soil compaction even though there’s an adequate supply of nitrogen in the soil. But as I’ve mentioned many times, if you’re gardening hand in hand with nature you’re not going to be dealing with problems like soil compaction.

When you look at a plant after reading what this supplier had to say, what you determine will most likely depend on the experience you have as a gardener.

To hopefully prove the point, I immediately grabbed the camera and headed for the garden.

These onion transplants were planted to the garden the third week in March.  The picture was taken April 6th.

What’s Your Answer Before You Read Further? 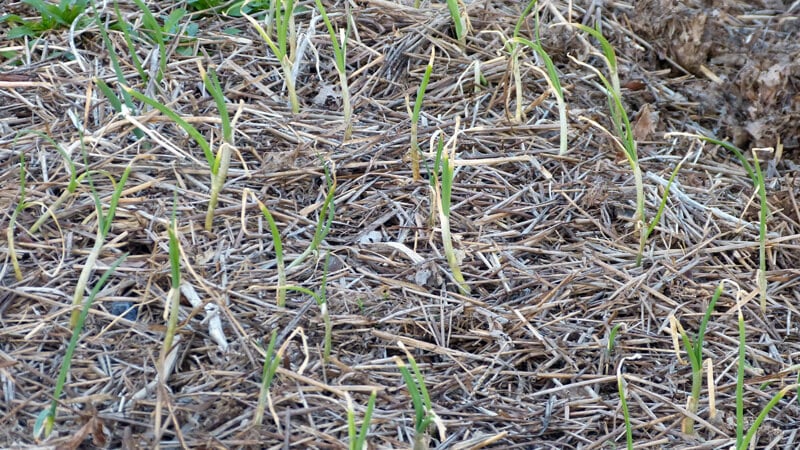 Transplanted to the garden the 3rd week in March.  The picture was taken April 6.  They’ve only started to grow in the last few days.

I grow most of my onions from seed, but order transplants for early maturing varieties.

I’ve grown onions for 40 years and to me all transplants always look shabby the first month.  (Those raised from seed never look shabby, just small for a while.)

Transplants sit in my garden for about 3 weeks or more before they show signs of growth above the ground.

Am I correct in assuming that an inexperienced gardener could think that these plants need more nitrogen or “something”?

Take a Look at The Same Transplants on April 30th. 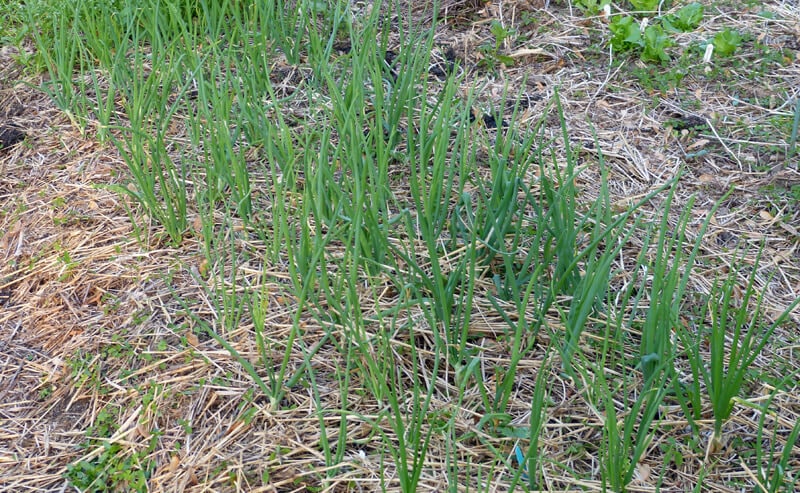 These are the same plants on April 30th.

Forty Years with No Added Nitrogen

This is my 40th year of gardening. I’ve never added nitrogen, but evidently I’ve always had plenty to supply my plants because things are always lush and green.  (Unless of course plants are coming to the end of their lifespan.)

Even With Minimum Organic Materials Covering  My Garden Beds, I Still Have Plenty of Nitrogen

Last fall (after breaking my femur in June and being in my kitchen floor for almost 4 months) I wasn’t strong enough to plant my winter garden, or cover crops, or even get mulch onto the beds. (In the heat of summer mulch decays more quickly and needs replenishing by fall,)

By the time I got to the garden, which was late fall and not often,  I pulled summer poinsettia (which had gone crazy in my long absence) and laid it on the beds to serve as a covering until I gained strength to haul straw or leaves.

By December I was able to rake the remaining leaves and finally got them onto some of the garden beds by January.

With everything I have to do to complete my healing and get my life back on track, I’m glad I don’t have to do anything complicated like figuring out how to supply nutrients to plants.

Nature takes care of that for me. She will for you too if given a chance.

Your main job is to pay attention, replenish organic materials, keep the soil covered, plant, plan and enjoy it.

Oh, and one more thing.  Don’t pay too much attention to all those articles about the stuff you supposedly have to buy to be successful.  I’m your proof that’s not true.

And if you need even more proof, read what dozens of readers have to say here.

Answering the Question Do You Need to Add Ferilizers to Your Garden to Feed This Years Crops?

3 Books That Can Change Your Garden, Your Health, and The Way You Look at Life

Soil Tests – The Pros and Cons