Over the past few years I’ve noticed more and more articles about microbes (a/k/a soil life).

With the increased knowledge of microbes will come increased promotion of products advertised as being beneficial to your soil life. And in some cases where the soil has been abused maybe they’d be helpful.

Chemicals, over tilling, compacting soil, using fungicides, etc. All cause a decline in soil life and prevent the development of all those beneficial microbes. But if you’re following nature’s principles you already have an active soil life.

The Most Written About Fungi – What They Do

The Mycorrhizal fungi is particularly popular and for good reason.

Attached to and feeding off the sugars produced by a plant, Mycorrhizal fungi grow into a mass that acts as a supplemental root system.

As they spread from the plant roots through the soil, they reach a volume of soil several hundred to 2,500 times greater than the plant roots could reach by themselves. This enables them to excavate many more essential nutrients located at distances too far away for just the roots to reach. They then deliver the nutrients back to the plant.

Since these fungi are the principal structure for most nutrient uptake (rather than the plants roots), you can see why it would be important to have these fungi in your garden.

(You’ll recall I first wrote about Mycorrhizal fungi in June of 2013.)

Pat, friend and reader in Tennessee, sent me an article from Mother Earth News entitled Mycorrhizal fungi: The Amazing Underground Secret to a Better Garden.

I learned a few helpful tidbits from that article that I wanted to pass along.

(The article also stated that among the relatively few plants that get along fine without fungi for partners are beets, spinach, most members of the mustard family which includes broccoli, brussel sprouts, cauliflower, collar greens, kale, and radishes.)

Sure made me glad that I had nature to guide me on this long before I ever heard of Mycorrhizal fungi.

Here’s how I keep living roots in my bed during early, mid and late summer: 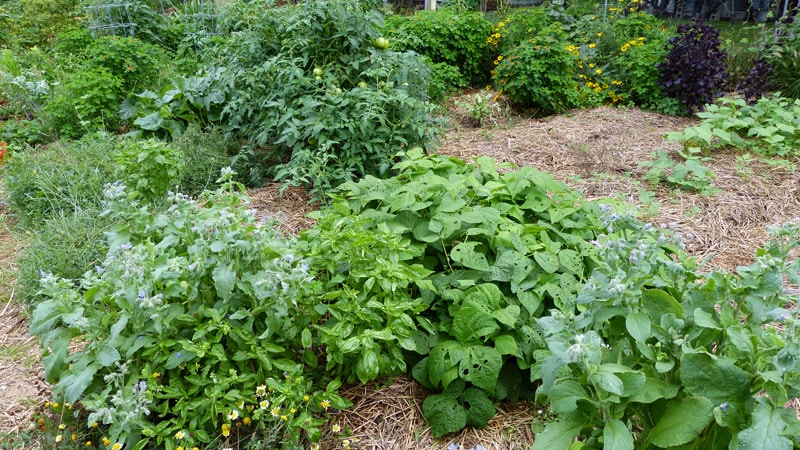 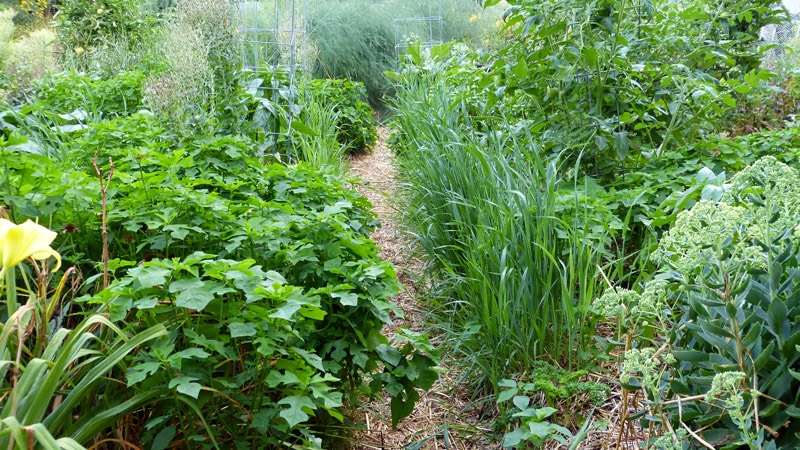 This is what I see as I enter my garden.  You can see sedum and daylily (perennials) at the begining of the row to the right and left.  Also in the picture are oats, late summer annuals, parsley, Blueberries covered to the far right, lettuce going to seed, peppers, eggplant, asparagus, squash, tomatoes.

This next piece of information was the one that made the article definitely worth reading for me.

Here’s what I’m doing that will accomplish that for me:

I don’t always have a living cover in every bed during the winter.  It’s something I’ll have to work towards.

A NOTE OF CAUTION about using Hairy Vetch

Hairy vetch has received a lot of press lately. Many recommend planting it as a cover crop in the fall, cutting it in the spring, and then planting tomatoes and other warm weather crops into the stubble. (In short, using it just like I use the rye stubble or the stubble of field peas.)

At least the author of this article (Douglas H. Chadwick, a wildlife biologist) warns that if you cut it too soon it’ll resprout as a weed, and if you cut it after it seeds it can be problematic.

I sowed hairy vetch in my garden 30 years ago at our previous location. We’ve been at our current residence for almost 16 years. I have hairy vetch come up every spring throughout my borders that surround our little-more-than-an-acre property. (It came with me when I moved my plants.) I go around at least 3 times every spring, trying to pulling it all out before it seeds. Obviously, I’ve not been successful.

One popular “educator” recommended hairy vetch in articles on cover crops. Several years later (after having obviously grown it) he/she changed their recommendation to field peas, saying that perhaps hairy vetch was not the best choice.

As with anything, there are always those who won’t have problems. I would think that farmers and gardeners who are not worried about vetch spreading or reseeding in flower borders and who know when to cut it, would do just fine.

If you’re gardening as Nature’s apprentice, then you’re already doing what is recommended to promote plant/mycorrhizae partnerships:

What a great and easy way to get all the help we need for healthy and productive crops.

_________
All content including photos is copyrighted by TendingMyGarden.com. All Rights Reserved.