If you’re a lettuce lover like I am, one of the best things you can do for yourself is to try a few new varieties each year and see if you can add another to your list of favorites. There are four main groups of lettuces to choose from:

I recommend trying at least one new variety of lettuce from every group each year.

One of the new varieties I tried this year was Sierra Batavia and it just about tops the list of my favorite lettuces.

Like all Batavia lettuces, Sierra is native to France.  In that country it’s known by the name Gloire du Dauphiné.

It’s great asset is its ability to withstand hot weather without wilting or bolting. ( And by the way — this doesn’t mean that if you go out at noon on a hot day that you won’t see it somewhat wilted like many other things in the garden.  It just means that it recovers nicely and stays delicious.)

Although it’s considered Red Batavia — it doesn’t have the distinct dark red that you think of with Red Batavias. Sierra Batavia lettuce forms open heads with beautiful pale green thick leaves with frilled edges that are blushed with pink at the ends. It really is gorgeous in the garden.

Regular readers will know that I succession plant lettuce March to May to insure a continuous supply through as much of the summer as possible.  I transplanted Sierra Batavia into the garden in the end of May. I was still eating that lettuce in August.  It was strong but not bitter.

Even with all my secrets of keeping a supply of lettuce in hot weather — I usually only get through most of July eating lettuce. This is the only year that I haven’t been without lettuce in August and  part of September.

This same May planted lettuce is still in my garden now and has not yet set seed. (I think it’s missed its chance for that.)  I’m not picking it — only because I have new lettuce growing now.  BUT — it looks good enough to pick.

Don’t know if Sierra Batavia will be able to match this year’s performance in future years.  This year rain came in due season until the end of July; only one rain from the end of July until now; and temperatures averaged in the high 80s or low 90s.  If things go back to normal (drought in summer; rain in fall; summer highs in the 90s) I don’t know that Sierra will last like it did this year.  My guess is that it’ll still outperform every other lettuce just like this year.

I started new seed in August and transplanted to the garden August 17, 2013.  Since close to the end of August I’ve been picking from that 3 foot x 2 foot patch of lettuce every other day.  We’ve had lettuce to eat everyday (sometimes twice a day) for the last 48 days.  Most of it has been from the 3 x 2 patch of Sierra Batavia. 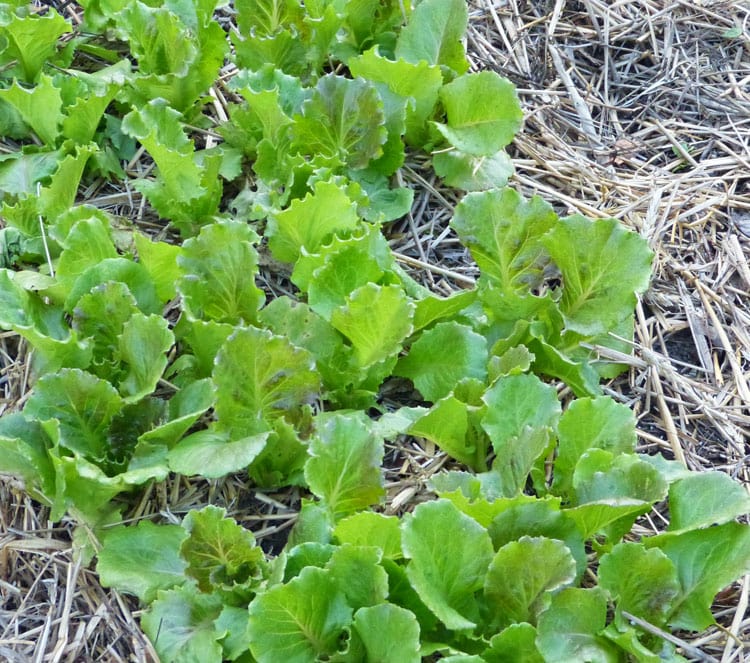 Transplanted to the garden August 17th. I’ve harvested at least every other day since the end of August.

The patch is still beautiful and grows very quickly. But I’ve succession planted since August and have more coming in almost every stage.  If Sierra Batavia makes it through the Winter into Spring I’ll be thrilled.

To help insure that I’ll have lettuce through fall, winter and early spring I’ve succession planted quite a few varieties. I’d never depend on just one.

Here’s what I have so far this fall:

If you don’t have this excellent Batavia lettuce in your garden,  why not put Sierra  Batavia on your list of seed to order.  I think you’ll be very pleased.

And by the way — I got mine this year from Fedco.

One Reason Plants Wilt and Actions that Help

Secrets to getting Eatable Lettuce Well into Summer

All content including photos is copyright by TendingMyGarden.com.  All Right Reserve