Yesterday was beautiful!  My first day out for more than 10 minutes at a time since all the snows.

Removed the cold frames from my lettuce and spinach.  They’ve been on for 20 days which is longer than I feel is good. (Topic for a future post.) The last few snows were wet and covered my garden with what seemed to me a one foot blanket of ice so the frames were frozen in place.  Chipped away a lot of the ice a few days ago but yesterday was the first day they were thawed enough to move the frames.

Lettuce and spinach looked good, but even though I had trapped voles in those beds just before the snows, the voles in neighboring beds found the protected areas to surface during the snow and severe cold. Not particularly good for my lettuce since the creatures undermine it when they tunnel under it and then surface.

If you don’t know what voles are (lucky you!), they are mouse-like rodents that when grown can measure 5 to 8 inches long, including the tail.  Sometimes grey, sometimes brown.  They are active all year long and extremely prolific.  I read somewhere that females mature in 40 days and have 5 to 10 litters per year; each litter from 3 to 6 young.  Do the math.  Staggering!

I trap mostly in the winter when their above ground runways that connect burrow openings are easier to see in my garden than at other times when vegetation is so dense. If I trap 1 or 2 dozen a winter, it goes a long way towards keeping the numbers down.  I never get rid of them totally though.

In growing season I watch for tell tale signs of vole activity that is harmful to my plants.  Most especially my onion beds.  I know first hand that some voles have a taste for onions!

They will also undermine lots of other plants like tomatoes, peas, beans, cukes, peppers etc. so I keep watch and trap when I suspect a lot of vole activity.

My trapping method requires one mouse trap, one good size flower pot that will fit over the trap, and a rock or something to weight the pot so it will not blow away or fall over.  For bait I use a piece of apple and tie it onto the trap. (Otherwise the vole may be able to take the apple without getting caught.)  If I don’t have apple I’ll sometimes use peanut butter.

With my gloved hand at the burrow opening I pull out the dirt to make a level landing on which to place the trap.  Then cover it with the pot and place the weight on top.  By the way, voles usually won’t take the bait unless it is seemingly protected.  Thus: the pot to cover it.

When I have traps set (maybe 15 to 30 days out of the year) I like to check them twice a day, although sometimes once a day has to do. I’ve caught as many as 5 from the same burrow opening and occasionally will catch a shrew as well. (A shrew has the appearance of a long-nosed mouse, but does not have the familiar gnawing front incisor teeth of rodents.) I’ve also caught voles at burrow openings that looked as if they were abandoned long ago. When caught they are immediately buried outside the garden.

Trapping voles is a task that I don’t enjoy, but I do it from time to time to keep them at bay and to be able to enjoy more of the fruits of my labor. Besides, its part of tending my garden.

Picture # 1 Snow and ice has thawed enough to take cold frames off.  (Notice the black pot to the right; trap is underneath.) 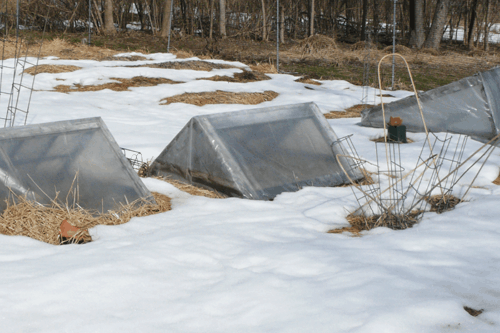 Picture #2 I am removing the biggest of the cold frames. (Notice the black pot with a weight on top.) 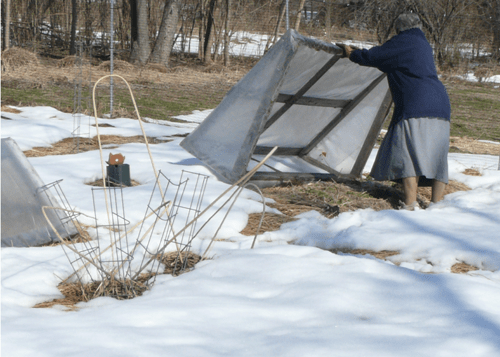 Picture #3 Various lettuces that have been under the cold frame. 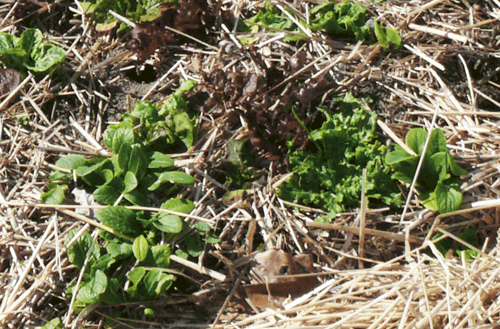 Picture #4  I have just finished picking spinach for a salad. 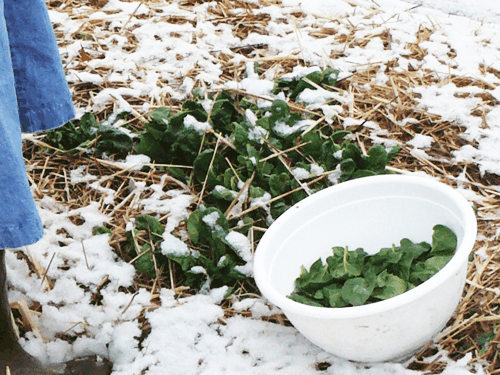