In the garden harvesting mache last week, it occurred to me that readers new to growing it might wonder about the best way to harvest this small but delicious green.

Later that afternoon when I checked the most recent post for comments, I found one reader had that very question.

Susan wrote: “I’m not sure of the best way to pick. I lose some of them when I pick just the leaves as they are still quite small. Any suggestions as to how to harvest——?”.

Things That Can Influence How You Harvest Mache

How you harvest mache can depend a lot on

The other things that will influence harvest depend on you:

When allowing mache to reseed (as it does in my garden), it will often come up en masse. Most of those plants will remain small until spring.

The smaller the leaves (and mache leaves are not huge to begin with) the more frustrating it can be to harvest enough leaves for your meals.

Mache seed that finds its way into the paths or into any space that allows it to grow alone (or with at least a few inches between plants) will grow bigger leaves, making it seem easier to harvest.

I assumed that Susan already discovered this when she wrote, “Some of the seeds from last year floated into the paths near it and they are doing tremendously! even better than the ones on the vegetable plot.”

When temperatures drop into the icy realm, mache plants hug the ground making the harvest even more trying.

Mache  leaves will raise slightly from the ground when moderate temperatures return, making it more enjoyable to harvest.

Some of the mache that comes up in my winter lettuce beds that are covered when temperatures fall below 28ºF doesn’t hug the ground because of that protection from the cold.  And it’s easy to harvest if the covers to the beds are not anchored with ice.

Protecting various spots of mache in the garden with some row cover fabric laid on top can make a bit of difference in how quickly the plants un-hug the soil after the sun returns – even when temperatures are still cold. 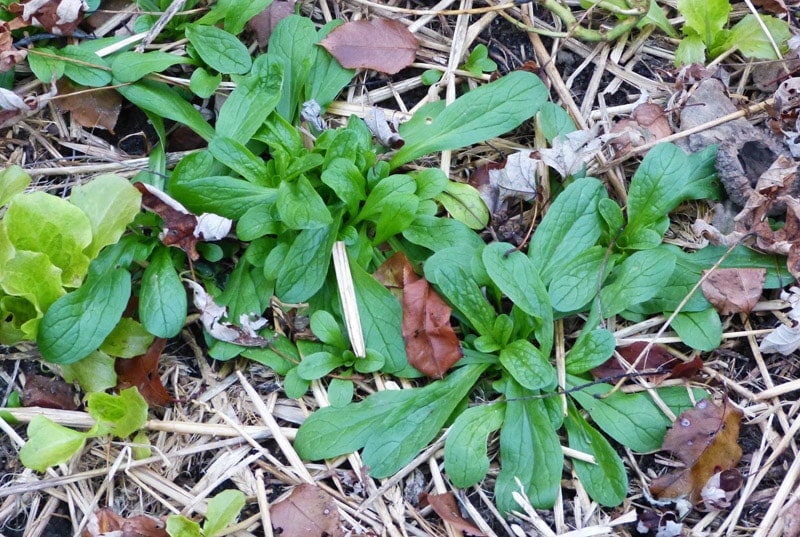 Mache with leaves held slightly about the soil making it easier to harvest.

The easiest harvests will be those few weeks when the plants feel the earth transition from winter into spring. They’ll become more full and replace leaves more quickly.

Once the weather turns warm the plants will grow quickly — and although still edible — they’re not as irresistible.

You’ll easily see them start to make this change.  Before they do — it’s your chance to pick enough to last another week or two. After you clean and spin dry you can store in crisper box of the frig.

I use a gallon zip lock bag for storage. Before I put the mache in

You Can Harvest the Entire Plant

At any time during the season you can harvest the entire plant by either pulling it from the soil or cutting it off at soil level.

The main advantage in harvesting just the leaves is the plant will continue to grow and eventually bloom and set seed.

Although there’s lots of mache in my garden, I still allow an abundance of plants to reseed.  It’s a staple for me in winter, since lettuce does not replenish itself as quickly in the cold months.  (And I eat LOTs of greens.)

Susan also asked how to “keep them until I get them into the house?“

In crisp cold weather (but above 32ºF) all you need is a container to hold your harvest.

But Susan lives far enough South that she probably deals more with warm temperatures than cold.

When it’s hot enough that greens wilt when picked, you always need a container with some water in it for your harvest. Immersed in water, they’ll keep just fine until you can get them inside.

PS to Susan — I answered your question about my Seed Starting Book in the comments area of the last post.

Suggested Reading if you want to know more about Mache:

Mache – Why Grow it and Secrets to Having Enough

Growing Winter Greens – Starved for Lettuce and Other Greens