As you continue to make your plans for your garden and/or flower borders this season I hope you’ll try at least one new thing.

I try to keep my “experiments” free from the pressure of “expectations” by adapting and “ok – lets see what this will do” attitude.

Last year I ordered a package of brussels sprouts for the first time. With Bill being sick, my notes on various plantings were even more sporadic than usual. Thus, I don’t know what the variety was and am not sure when I started them.

Divided the seed between two grow-mix-filled jug-bottoms. Not very many germinated and some looked puny at best. I transplanted 3 of the best to larger pots. Ignored them until late spring. Only two remained. Was tempted to just toss them out, but didn’t.

Transplanted to the garden way too late to think about getting brussels sprouts. To make the experiment even “more telling” I chose two different beds for each plant. They stayed about 2 inches tall for what seemed like an eternity (sorta like my peppers usually do). Finally started looking pretty good, but still rather short.

Couldn’t help but wonder if they made it through the summer due the unusual amount of rain and moderate temperatures we had.

Cold weather came. At the last minute I decided to give them a minimum of protection with some row cover fabric.

Spring has arrived once more and one of the plants has put up a nice tall stalk as if it will produce brussel sprouts. And yes – I know — brussels sprouts are best when touched by frost in the fall. BUT — this is an experiment and I can hardly wait to see what happens! 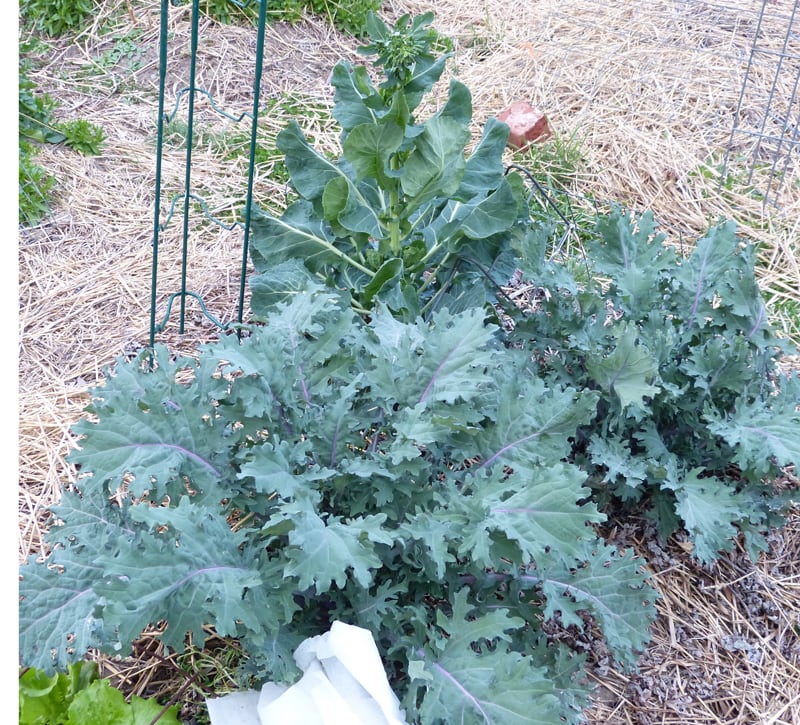 The brussels sprout plant is behind these two Russian Kale plants. Picture was taken April 1.

My point is that we gardeners sometimes have “itchy fingers” and always want to pull up and toss plants if they’re not performing as we feel they should. By doing so, we lose all that valuable information that we’d have if we had just left them alone.

Jack, friend and reader, in New Jersey wrote to me a year or so ago when he was first trying his hand at growing onions from seed after reading one of my posts on that topic. He was very disgusted with those onions because they had not yet obtained the size that he felt they should. He was gonna pull them all up. I encouraged him to leave them and to wait and see. He did.

That crop of onions turned out to be gorgeous! He never would have realized that if he had given in to pulling them out.

I hope you’ll take this tip to heart and not be tempted to pull something up if it doesn’t do what you expect it to do. If you want to learn more, leave it alone and see what happens. It’d be a shame to waste all the time already invested and not get the most knowledge possible.

If your experiment involves an entire row and they’re taking up too much space that you need for other things — at least leave a few so you can benefit from the experience.

Wishing you the best garden yet!
Theresa