My mulched garlic looks good.  It’s not quite as tall as it was before the cold temperatures.  Looks as if about an inch of the tips were browned by freezing.  Otherwise, it’s fine.

I’ve just used the last garlic bulb from last year.  I planted more this year in the hopes of getting through next fall, winter, and spring with my garlic rather than any store-bought.

The first few days the temperatures remained in the 20s day and night, all the lettuce was wiped out under the hoop tunnels.  Had hoped that maybe some of the small stuff would stay alive to be the first lettuce of spring.  There are a few pieces out there that look “rough”, but still might make a turn around when conditions are right.

Also there is a plant out there that must have come in a mix of greens.  (I don’t know what it is. That’s one reason I’m not found of mixes.) I call it a lettuce because it looks like a lettuce. But the leaves are very thick and unlike any lettuce I’ve experienced. It looks really good and I’ll probably be eating that within a few weeks.

My favorite winter green is mache (also called corn salad).  It’s delicious and just laughs at cold temperatures. In our normal winter temperatures of freezing at night and above freezing in the day it seems to grow even when day light fall below 10 hours in winter.  The two self-seeded patches have been uncovered and exposed to the extreme temperatures the entire time. Although it stopped growing it still looks green and lush.

I tried to pick some today but the leaves were just too tiny.  But then to my delight I found 3 thriving, growing plants when I uncovered one of the hoop tunnels. The leaves were a little bigger than quarter size.  (That’s large for mache.)

I had one hoop tunnel that was protected by two layers of plastic.  That was the last hoop tunnel we “made.” By that time we had two pieces of plastic remaining and neither was really big enough to fit properly, so we used both.  Although spinach is very hardy and probably would have done fine under just one layer of plastic, I’m sure that second layer contributed to how robust and wonderful it looked.    One layer of green house plastic is said to make a difference of 1 1/2 zones to the south.  Therefore, two layers would be 3 growing zones to the south.  I don’t think this happened with these two layers because they were not put on that well.  But it certainly has me thinking about doing better next year.

I had thought to take a picture of the little patch of spinach under one of the hoop tunnels, but forgot about it until it was picked and in the house.  Below is a picture.  We were having guests for dinner and I was fortunate  to have enough spinach to make a salad for 4.

Spinach is so much sweeter in cold weather. I added cubes of roasted beet, walnut pieces, and feta cheese.  Drizzled with my vinaigrette of olive oil, balsamic vinegar, a clove of garlic, a teaspoon of dijon mustard and honey, and about 1 tablespoon of fresh lemon juice. It got rave reviews! 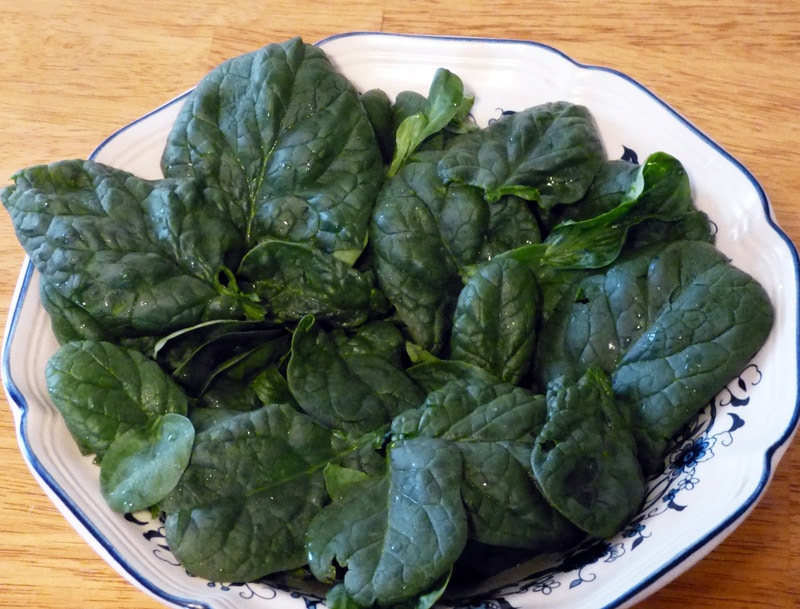 Spinach made it through the cold just fine under the double hoop tunnel.  This was harvested February 20th. The smaller lighter green leaves are mache.

Just too cold for Rosemary this year.  I lost my oldest plant which is about 6 years old and the two newer plants put in year before last.  Disappointing.  I use lots of Rosemary for cooking and don’t think I can get a new plant to grow fast enough to keep up with my demand.  Fortunately, I have some frozen which should last until mid summer if I ration. (It’s chopped and mixed with a bit of oil.)

My blueberry bushes look fabulous.  I guess they enjoyed the cold.  The stems are turning that “new” red color that shows when spring is almost upon us.

Alice, a reader out west, told me about cutting celery.  2013 was my first year for growing it and I really enjoyed having it in the garden and using it for soups and such.

I mulched it heavily and it made it through the first cold spell.  Once the temperatures dropped to 20 and below and stayed below freezing, it was done.  I’ll grow more this year.

Enjoying the cold and doing just fine without any protection.

(And by the way, I never planted cresses.  They came in “wild” and I was thrilled.  Now, with a little help from me, they come up here and there and make a wonderful cooked green at times when nothing else is available.) They can get very big – a circular clump with a diameter of 2 to 3 feet.  How many you let grow depends on how much you like them and how much room you can spare.

I usually let the small plant stay until they get too big.  I keep at least 2 or 3 really big ones on hand and let them seed for next time.

A few tiny pieces remain under one of the tunnels.  They might do ok now that we’re quickly heading into spring.

They’re gone.  I thought for sure the Russian Kale under the hoop tunnels might make it through, but it didn’t.

When I harvest onions, I always have some that only made tiny bulbs. (a/k/a sets)  This year I had about 30 and replanted them in the garden about the first of November.  They sprouted and got up about 4 inches until the severe cold set in.  They seemed to disappear after that, but today I noticed them sprouting again. Guess I’ll have some early spring onions after all.

I noticed several onions under the hoop tunnels that I can pull and enjoy anytime now.  They were probably small onions left in the ground last year when I harvested.

I planted alfalfa in my grow bags this fall to hopefully derive the same benefits as cover crops planted in the garden. I plan to turn the alfalfa under at the end of this month. In spite of the cold it still looks nice and green, although I’m sure growth was not what it would have been had temperatures been more moderate.

Grabbing a handful and firmly pulling told me that root growth was strong.  It’s in there!  After I turn it, the roots will decay and should be very helpful in providing a nice habitat for the next vegetable I plant there.

They loved my hoop tunnels.  I knew when it turned really cold that they would go right to the ground protected by the tunnels.

I didn’t think about taking bait for the traps when I headed for the garden today.  When I saw all the holes, I set some empty traps anyway.  I’ll take peanut butter to bait traps when I go to the garden tomorrow.

I’ll start trapping intensively again from now until spring to get the numbers down again.

When we get to February, it’s always spring as far as I’m concerned.  Yes, I know: Nature can still throw some storms and cold weather at us.  But nonetheless, any way you shake it, it’s time to start making serious plans for the garden. No matter what nature throws our way, we have to do everything we can do if we want to a great harvest.

Little things done now can take a lot of stress out of the task when the time arrives and we’re busy with other things.

I think of you often when I’m in my garden. I hope these notes and thoughts will help give you some new ideas about what you want to accomplish now and the days ahead.

Organic gardening is easy, efficient and effective and it’s a lot easier.

All content including photos is copyrighted by TendingMyGarden.com.  All rights reserved.