I read something from Organic Gardening Magazine (via an email) that said ripe tomatoes will keep in the refrigerator several weeks.  I’ve tasted refrigerated tomatoes and found them flavorless and tasteless.

Tomatoes are one of our favorite things and we grow them and enjoy them fresh from July through December and I want them filled with flavor. In 32 years of growing tomatoes I have never kept them in the refrigerator. (I grow about 50 plants a year, this year not included.)

During peak season I keep tomatoes in a single layer flat basket in a cool place with constant air circulation away from direct sunlight.  If the basket fills with ripe tomatoes, I know it’s time to start preparing and freezing for winter use. 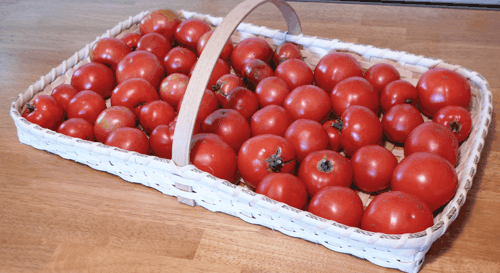 I try to keep tomatoes on the vine as long into the season as possible.  If I know an early frost is expected I will try to throw some Reemay, newspapers, an old sheet or some means of temporary protection over the plant for that night.

Here in Virginia if you can get through that first frost or two you may have weeks more that will be perfect for tomatoes on the vine.  Once I expect frost to occur more regularly, I bring in all the partially ripe and green tomatoes.

I have a friend who was raised on a farm and they use to pull up the entire tomato plant when frost was expected and hang them upside-down in the barn and harvest tomatoes as they ripened on the vine.  If I had the space, this would be the way I would go!

The article in Organic Gardening Magazine (mentioned above) also suggested that you wrap green tomatoes in newspaper to slowly ripen them.  I use to do that years ago.  Since you must check the tomatoes frequently to make sure any rotting ones are removed, it got to be a pain.  It is much easier to check if the tomatoes are not wrapped. Having had success for many years doing it this way, I see no advantage to going to the extra work in wrapping them. 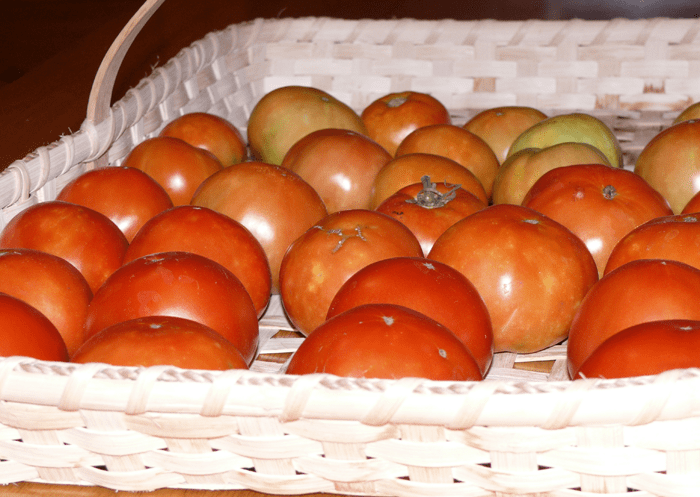 As with my in-season tomatoes, I keep them where it is cool with constant air circulation and away from direct sunlight.

I try to keep the green tomatoes in my single layer basket as well.  Sometimes the harvest is too great and I have to put them in an additional basket that is deeper.  Just remember — you must check them because it is normal for some to rot.

One last thing that may help you in your effort to eat fresh tomatoes through Christmas:  As December comes and the tomatoes diminish they don’t look as beautiful as they did in peak season.  This can fool you.

I have cut into a tomato on Christmas day that I was sure I would probably have to throw away.  It appeared almost all green with a hint of pink on one end. When I cut into it — it was as deep red/pink, juicy as a July tomato, and with all the flavor I expect from a fresh fruit. Things are not always as they seem. So test first before you throw it away.

If you love tomatoes as we do, it will be worth the effort.

All content including photos is copyright by TendingMyGarden.com. All Right Reserved.