From the minute I first read about fish peppers a couple of years ago I knew I wanted to grow them. I’m not sure what appealed to me most, their beauty or their history.

Not only is the fish pepper beautiful enough to grow as an ornamental, but it’ll give hundreds of hot peppers to use in the kitchen, both fresh and dried to take you through the winter.

Its variegated green and white foliage is decorated with pendant fruits 1.5 inches to 2 inches long.  The fruit starts off green and then turns cream colored with green stripes. As they ripen they change to purples and orange and eventually to an all red pepper that to my taste buds are comparable to a cayenne pepper. 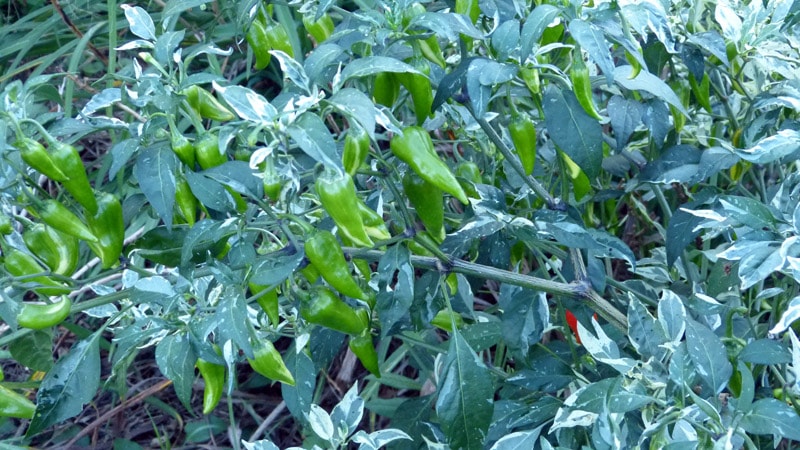 Long about the end of August and September the plant is heavy with green fruit that is turning to cream color.  The red one hidden by the foliage was an early fruit.

These little peppers are perfect for cooking fresh or dried. The dried ones can be ground into flakes or powder if you want. I don’t have a dehydrator, so I air-dried many of them for winter use.

Fish peppers in 5 stages of air drying.  From right to left: Fresh off the plant to totally dried. Since I don’t use mine for clear sauces, I dry all of mine red rather than cream color.

From what I had read, I expected the plant to be 1.5 to 2 feet in height.  Mine grew to 3 feet and was at least 3 feet across.  It was planted in the border behind my garden by my Tree Rose and evidently loved it there.  (If you plant in a container expect the small height for sure.) 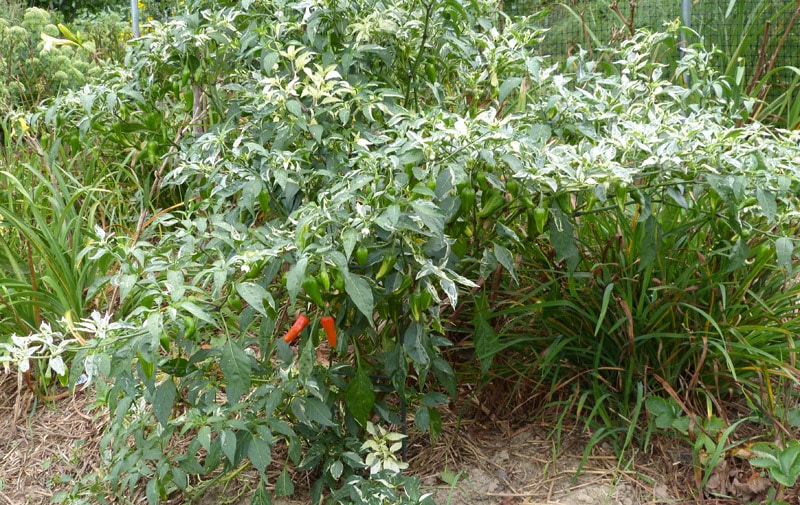 In August the fish peppers are just starting to turn cream color. The two red ones were early peppers. By October the plant looks like a tree decorated with mostly red peppers.

Fish peppers are said to have originated in the 1800s in the Baltimore area. (I’ve seen the date 1870 as well as a mention of the early 1800s.) Word of mouth history says they were almost exclusively grown by black American gardeners and chefs and/or  truck farmers (those who grew for market) in the Baltimore and Philadelphia area who supplied them to crab and oyster houses throughout the mid-Atlantic region .

What made them special was that young cream-colored fruit could be (and can be) dried and still retain their cream color. When added to French-style cream sauces or soups, they spiced up the recipe with seemingly invisible heat. The white pepper added the spicy flavor, but didn’t muddy the clean look of the sauce as red pepper would have. 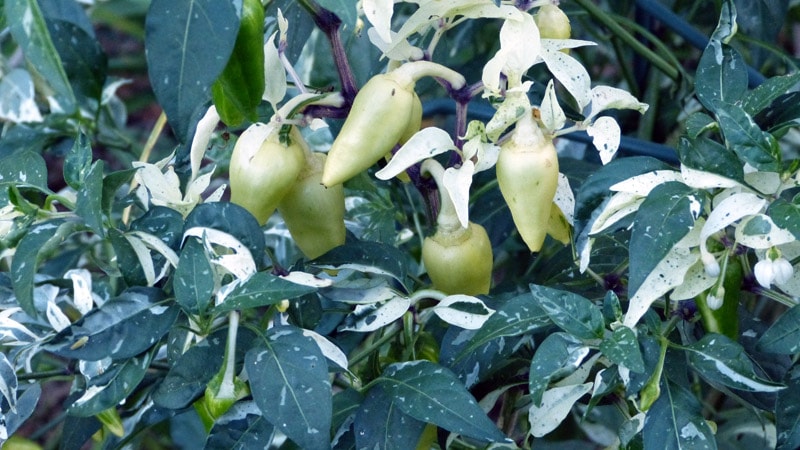 Peppers turning cream color.  When they were a bit more cream colored, they were used by chefs as the secret ingredient for seafood sauces.

Fish peppers were first used by famous black caterers in the Baltimore and Philly areas.  This “secret” ingredient never showed up in cook books and was passed down passed down in recipes communicated only by word of mouth. Since they were especially used in seafood sauces and soups, they were called fish peppers.

To further explain their popularity with seafood, their subtle sweetness is enhanced with lime juice or pineapple.  I can see where the combination could be quite enjoyable when served with fish and shellfish.

If you love seafood and grow these peppers, you might want to look up some recipes for Fish Pepper Salsa.

Although there’s not that much written information available on Fish Peppera, what has been written indicates that they fell off the culinary radar for a while. Knowledge of the peppers (which has been passed down in stories) and its seed became scarce, as it’s popularity diminished.

The public may never have been offered the opportunity to grow this unique little heirloom peppers that are very much a part of the culinary history of the mid-Atlantic region of our country and an interesting part of Black American history. Fortunately, William Woys Weaver shared his Grandfather’s fish pepper seed (that, in the 1940s, he obtained in barter  with Horace Pippin of West Chester, Pennsylvania) in the 1995 Seed Savers Exchange Yearbook.

Careful Where You Get Your Seed

Now that Fish Peppers have made a little “splash” in the news,  “off” seeds are being offered by various companies. Those seeds are producing plants with leaves that are not multi-colored enough and have pods of the wrong shape. So stick to the sources that you trust.  I got mine last year from Fedco.

I have not ordered new seed this year and hope the little bit of seed I have left will germinate ok.  Usually I have good luck up to two years with pepper seeds, although germination is lower the second year that the first.

Starting Seed – What Characteristics to Look for in Seedlings

Now’s the time (in Virginia at least) to start the seed indoors (6 to 8 weeks before your average last frost date).  Plant more than what you want , so you can pull out plants that are not as variegated as they should be.  You can’t tell when they’re seedlings.  It takes a bit of growing in the ground before you’ll know.

And if at anytime – including seedling stage — you get an all white plant, pull it up.  Those are the plants that will be the weakest.  They’re the pure albino ones and will not grow well (if at all) because they can’t photosynthesize. Get rid of them.

William Woys Weaver, mentioned above, is author of the book Heirloom Vegetable Gardening. He says the fish pepper began as a mutation of the common serrano pepper, a type of chili pepper.  He goes on to say it has a wild nature because of unstable genetics and crosses very easily with other peppers.  Hopefully, I kept mine far enough away from my sweet peppers last season that I won’t end up with a hot-sweet pepper or a variegated bell pepper from the seed I saved.

When you save seed for next year’s planting, save it from ripe red pods.

Mr. Weaver also recommends something that I would recommend for almost any vegetable from which you are saving seed:

This unique little hot pepper is still considered a rare pepper. If you want an heirloom with an interesting history that’s easy, fun, beautiful, produces huge crops of peppers, and is suitable for a range of culinary purposes, why not give fish peppers a try.