Everything considered, I’d recommend straw for most gardeners rather than hay as mulch to use in your garden. Here’s why.

As far as the farmer is concerned, the main use of hay is to feed animals in seasons when grasses are not growing. He will want it to have the highest nutritional value for the animal. Because of this he will harvest (cut) the various grasses, legumes and other herbaceous (non-woody green plant) plants that make up hay after they form seed heads.

Most Frequent Effect of Using Hay for Mulch

Herbaceous plants are called weeds when they get into your garden. :) And that is usually the effect (result) of using hay as mulch.

I inadvertently asked for hay instead of straw one year and that slip of the tongue turned into a nightmare. I had weeds everywhere!! It took what seemed forever to get rid of them.

Hay can be an Excellent Mulch if

If you have enough property to grow your own hay for mulch, you can harvest before the seed heads develop. If you can do this — you’ll be good to go using hay to mulch your garden. This is the way I would choose if I had enough property and the means to harvest the hay. An EXCELLENT source of mulch and organic material.

Examples of What Others who use Hay Have Done

_I’ve read of gardeners who let the hay bales sit for a year allowing the seeds to sprout. Then they use it to mulch their garden. I would think there would still be many seeds that would lie dormant until the following year. Considering how long most weed seeds are viable, it still might be chancy even after letting it sit a year. Unless of course, you have time pull up the resulting weed growth.

_Other gardeners open the bales of hay and let their chickens have at the seed, then use the hay for mulch after that.

_Years ago I remember reading of Ruth Stout using hay — probably because it may have been cheaper than straw. If weeds sprouted she just piled on more hay to smother them. In theory that sounds like a great plan. It certainly worked for her. But the weeds from hay seem to get the better of me — so I don’t use it. (In case you don’t know, Ruth Stout was probably the first gardener to publicize what she had discovered about gardening being so easy.)

(Note added March 2013 – After I wrote this post I found out that it was salt marsh hay that Ruth Stout used. Salt Marsh Hay is made from the grasses that grow in coastal marshes, and it contains no weed seeds.)

When farmers grow grain like wheat, oat, and barley the grain is harvested first. Then they bale the stems (stalks) that remain which are called straw. That’s the byproduct of the grain harvest and farmers use it for animal bedding.

Why it Makes a Good Mulch

It makes a good mulch because it doesn’t contain all the weed seeds that hay might have.

Seeds that Do Get in are Easier to Deal With

When straw is baled sometimes some of the grain gets into the bales. (And possibly a few weed seeds now and then.) So if you see what looks like green grass coming up at various places where you have your straw (mulch), it’s the newly sprouted seeds of grain. They’ll be easy to pull out and not a big problem if you do it in right away. And that will be the end of them. It will be much easier to deal with than weeds from hay.

As with everything, there can always be the exceptions to the rule. But – all things considered – I’ll go with straw to mulch my garden. 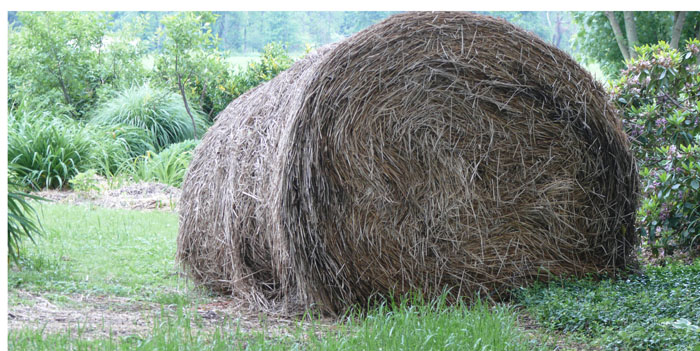 At the beginning of the season I have at least 4 rolls of straw, but I always try to keep at least 1 roll on hand.

Mulching Your Fruits, Vegetables, and Perennials

Why Mulch your Garden Paths

3 Things to Keep in Mind When You Mulch

_______
Organic gardening is easy, efficient, effective and —- it a lot healthier!