With hoop tunnels and Virginia’s short-lived winters, I usually can manage a salad 2 or 3 times a week even during January, February and March. Boy, was this year different! The cold started in December and continued to date except for a few respites here and there.

It didn’t take long for the my cutting celery, Russian Kale, and Chard to succumb to the severe temperatures. Even the pak choi finally gave up.

Under my hoop tunnels the lettuce was rotted at the base by January.  A few pieces made it through and even though they don’t look good right now, I know from past years that they’ll be the pieces to produce lettuce first in early spring.

A patch of spinach in one of the hoop tunnels has managed to produce at least enough for a salad or two every month.

Another patch of baby swiss chard survived although it looked poorly for a while. It renewed itself this past week and looks great! 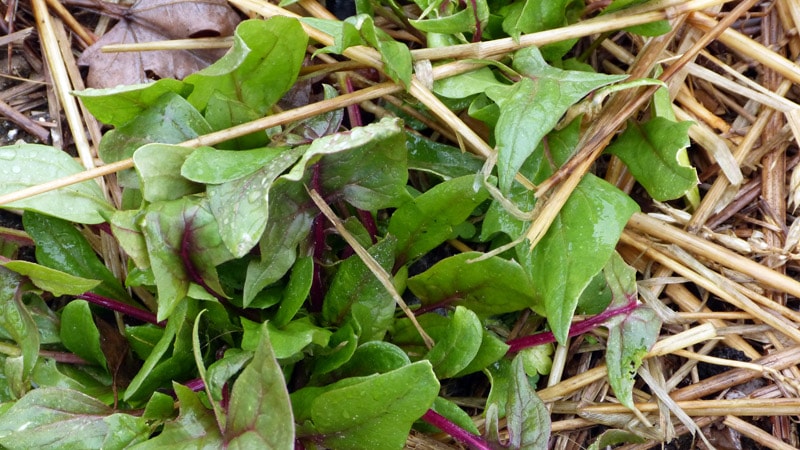 My fall planted onions made it through and will give me early spring onions. 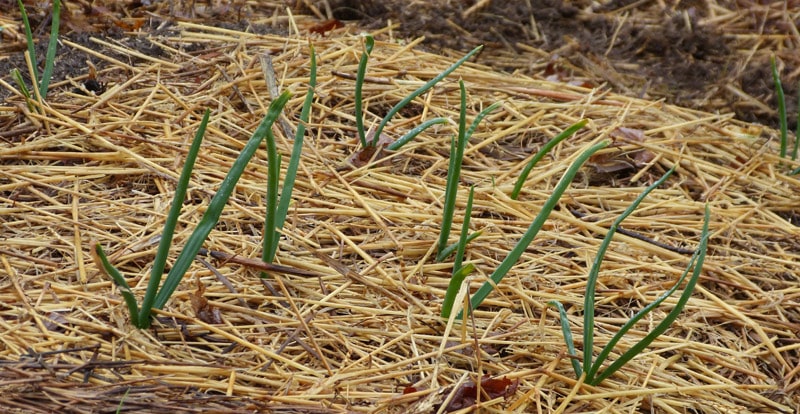 Although I’ve not had enough “green” stuff to satisfy my craving for salads, thanks to cold-hardy mache (also known as lamb’s lettuce, corn salad, and field lettuce) I’ve had enough to get by during these cold months of a more severe winter than what we’ve been use to.

Mache is a gourmet green usually referred to as having a nutty flavor and it may taste that way to some folks. But it’s very tender and buttery to my tastebuds. 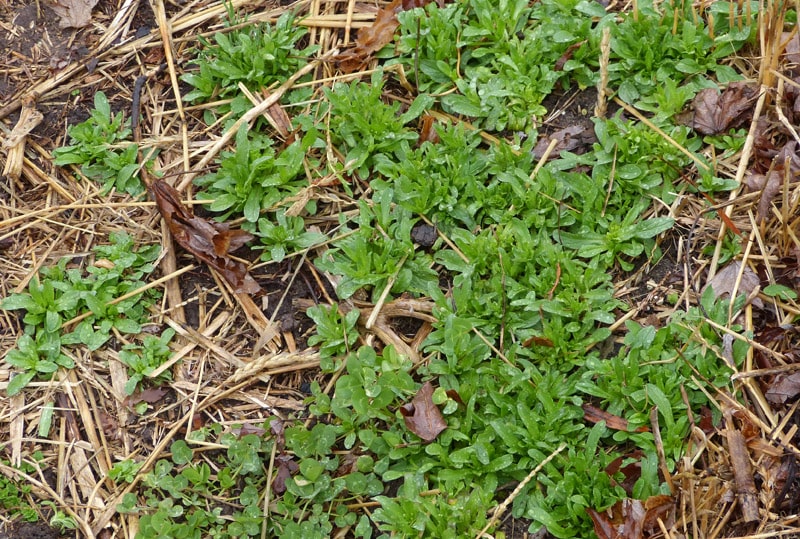 A patch about 2 feet x 2 feet at the end of a bed and extending into the path. March 30th.

Their are many varieties of mache, and even the so called large-leaf varieties are not all that much larger. Nonetheless, any increase in size makes for easier harvesting and more salads.

The plants form a rosette that grow low to ground.  Some varieties are only about an inch or two high.  Other varieties form a dense clump about 2 to 3 inches high. 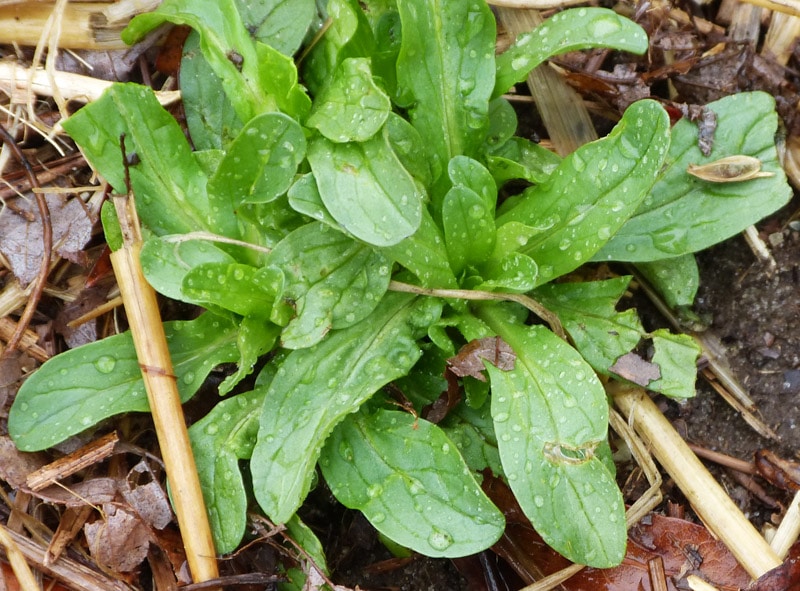 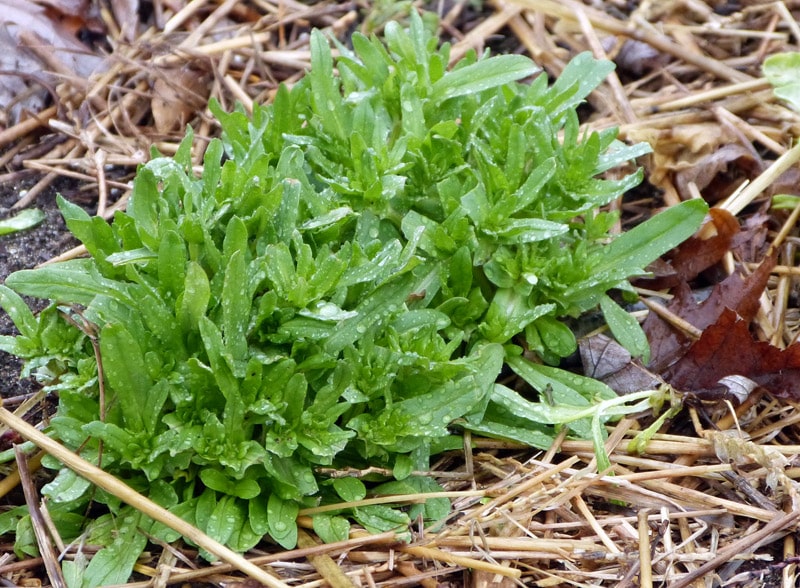 If you get lots of it growing in your garden you can cut the entire plant off at the base and use it. I don’t ever have enough that I can bear the thoughts of using the entire plant. So I go to the tedious task of picking those tiny leaves either one at a time or by pinching several at a time. That way, it seems to renew itself more quickly.

How to Get it Started in Your Garden

Several years ago, when I first tried to grow Mache, I sowed the seed in early spring.  Not much grew.  By October, the seed was coming up in places that I’d not even planted it.  When I saw that, I knew right away this plant wanted to grow in the fall.

You can broadcast seed in late August or September and it’ll come up when conditions are to its liking. It’ll thrive in the cool weather and absolutely laugh at the cold.  When things start warming in April it’ll go to seed.

If you get too busy to notice and fail to collect the seed to sow in more convenient places, it’ll sow the seed where it drops.  And once again will return to your garden when conditions are right in late summer or early fall. 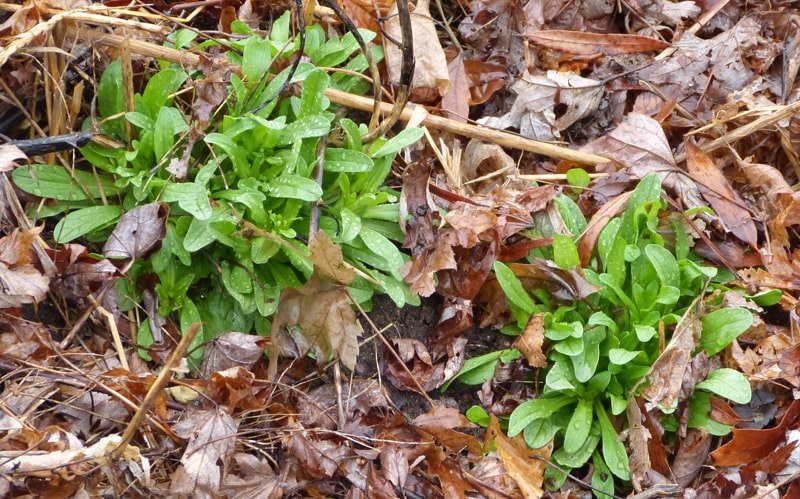 Mache that came up in the most unexpected places in the garden. March 30th

One of the best parts of saving the seed is that within about 3 years you’ll have plants that are specifically tailored to the conditions in your garden.

Mache as a Cover Crop? Now that’s a novel thought!

My goal is to pay attention this year; collect the seed; and sow several beds of it for winter use.  When seedlings emerge  in late summer or fall, I could transplant where necessary to get more even distribution and use it as a cover crop.  (I’d still add some mulch, just for good measure.)

I’ll be in salad lover’s heaven if that visualization becomes reality.

Mache is one of the most nutritious lettuces you can grow. An excellent source of Vitamin A and C.  A good source of B6, potassium, manganese, copper and iron.  All or one of those must be what my body wants when I crave greens.  A salad of mache stops the craving anyway.

One of the Most Reliable Cold-Weather Greens

If you want to have greens for salads all winter, mache will be one of the most reliable sources.  I’m zone 7 and it survived in my garden without protection.  (Temperatures fell to zero degrees at least once this winter and at night we had low double digits most of the winter.)

If you’re in a colder zone, plan to throw on some agricultural fabric when it turns too severe.  Or perhaps set up hoop tunnels over the beds with mache growing in them.

Think about adding Mache to your garden this year.  If you already have the seed, wait until late summer to sow it.

If you don’t have any seed, order now before you forget or while supplies are plentiful.

If you love lettuces and tender greens like I do, Mache is something you’ll want every year in your garden.

See comment below.  Jack (reader from New Jersey) found this growing in his garden. 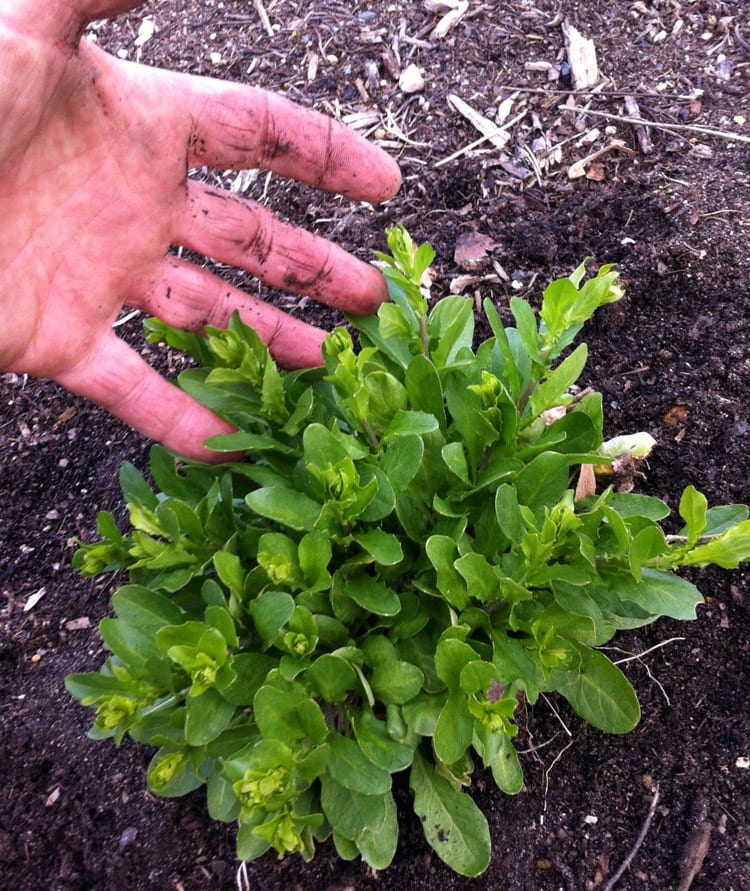