In a letter to subscribers I mentioned that Frank (a reader in our area) had asked if it was too late to plant potatoes.  I answered:

That’s a question the answer for which will depend on what’s going on with the weather and your garden.

When I plant potatoes in the spring I usually plant three times.  Usually late March, April, and May.  The exact date can vary with the weather.

This year I planted my last planting of potatoes at the end of June. That’s unheard of in my garden prior to this year. Usually it’s so dry by then the potatoes would not have the water they needed to get off to a good start. But we’ve had rain in due season this year so I knew potatoes planted in June would have a great chance.

Even now — if you have great conditions in your garden — you could still get in a potato crop for fall. I’d sure give it a try.

Mary sent me a reply.  One of things she said was,

“I only planted potatoes once, about twenty years ago, but three or four grow in our small garden every year.  Obviously my harvesting isn’t perfect! But I leave them. We hardly eat any potatoes, only the ones from those escapers.  Free food.  As for when – well ours always come up at the same time even though they’ve been in the soil since the year before. Perhaps the natural way is best …”

All of us who have gardened any length of time have had volunteer potatoes come up in the spring — way before the so called “official” time to plant potatoes.  It can happen no matter how well we thought we harvested all of our potatoes the previous season. And if you live in a moderate temperature zone and/or mulch your garden heavily like I do — the potatoes will do well in the ground over winter.

Regular readers will already know that Bill and I depend on our garden for most of our food. And potatoes are a favorite crop. I succession plant approximately three 8 foot rows of potatoes every year.

But I must admit that I get almost as many potatoes from the volunteers that are scattered about my garden and borders. For example, this morning I needed the space occupied by one of the volunteer potatoes and dug about 5 pounds in a 1 foot square area. 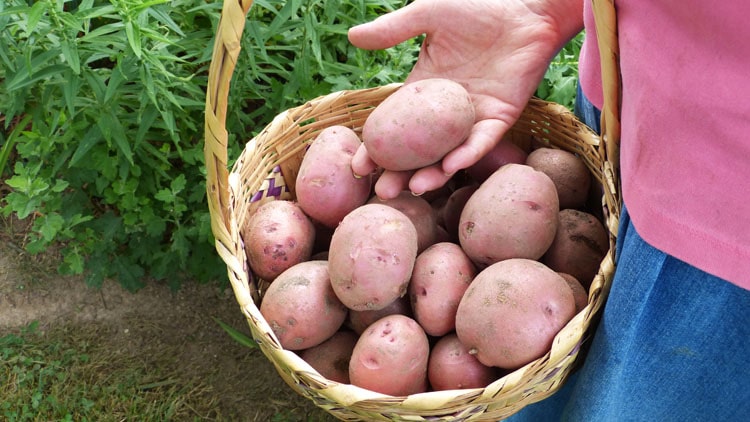 Little more than 5 lbs of potatoes harvested from a foot square area this A.M.

And of course — I love it that potatoes left in the ground over the winter produce much earlier than any potato just planted this season.  That’s the most exciting part because we’re starved for garden fresh potatoes by late spring.

As you can tell — Mary’s 3 or 4 potatoes that grow in her garden each year would never be enough for Bill and me.

So —- is the natural way the best — as Mary states?

The answer — like so many answers to various questions — depends on the circumstances and what’s going on with your garden.

My garden is healthy — but I’m continually striving to improve it’s health.  To do so not only prevents pests and disease but increases the nutritional value of our food.

If any vegetable is grown in the same spot over and over with nothing returned to the soil it’s logical that the soil will eventually be depleted of nutrients and thus — so would the vegetables.

In order to allow my wonderful volunteers to continue to come up in my garden, I make sure that all those beds — even those that have potatoes in them now — are planted with a cover crop that will enrich soil.  After the cover crop is cut and laid top, I cover with a layer of leaves in the fall and then more straw.

In addition, I watch those volunteers carefully while they’re growing.  As long as they seem in the peak of healthy — I let them stay and continue to reproduce.  If they look bad — or even if they start attracting potatoes beetles (which could well indicate a weakness) out they come. (And yes, of course potato plants look bad when they are finishing up for the year, but that’s normal.)

If you’re a new gardener starting with poor soil that has not yet reached the level of improvement you want, I would recommend not allowing volunteers to grow —- especially in large numbers.

If you’re satisfied that your garden is in the peak of health — allow them to grow but watch them closely for any negative sign.

Continue to diversify your plantings even amongst the volunteers as they grow. (I have lettuce, radishes, and several greens and herbs mixed with my volunteers.)

As the season passes use organic materials and cover crops to help you return minerals and nutrients to the soil.

I have a feeling that in times gone by before chemical companies had the reins — when the soils of this nation were much healthier and nutrient dense  —- many farmers probably allowed their potatoes to stay in the ground and regrow each year.

With nutrient rich and biologically alive soil — the “natural way” to grow potatoes that Mary spoke of — can be one of the best and most rewarding ways.

How to Plant Potatoes to Extend the Harvest

Potatoes – Are Yours Disfigured?

Organic Gardening is easy, efficient, and effective — and it’s a lot healthier.