Ginger is a super herb that’s worth looking into if you don’t already know about it.  It’s been used in the culinary arts and medicinally for thousands of years by cultures worldwide.

Like almost any vegetable or herb, store bought ginger can’t compare to home grown ginger. The flavor and smell of what you grow in your own garden is so superior to what you buy in the grocery store.

Jack, friend and reader, who lives in New Jersey started growing ginger for his daughter. She’s a big fan and uses a lot of it during the year. After tasting her Dad’s freshly harvested ginger she told him it was the “best ginger she’s ever had and far less fibrous than anything she’s ever bought in any store.” 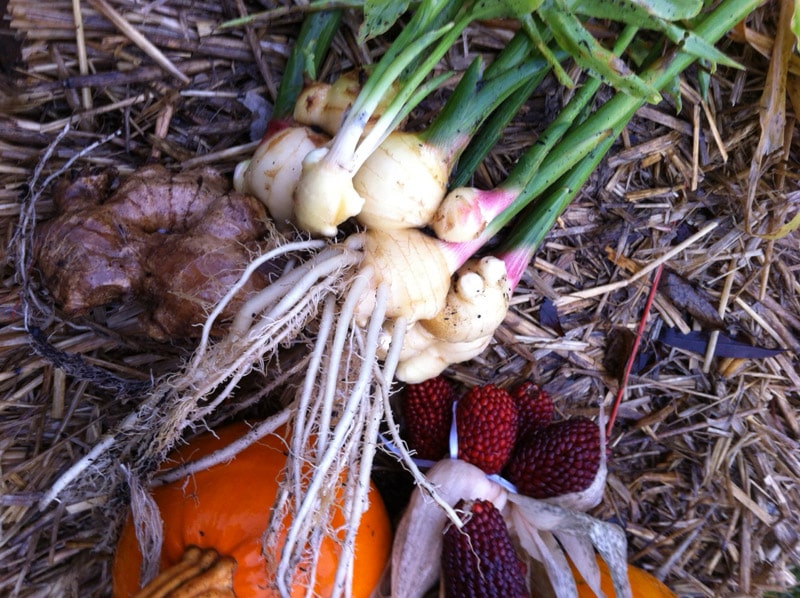 After growing it myself this year, I agree with her evaluation 100%!

Can you get a harvest of ginger without living in the tropics? YES!

Ginger is tropical and loves hot humid weather.  If you can provide warmth and moist, rich soil you can grow ginger even if you don’t live in the tropics.

If you live in an area where temperatures don’t fall below 50ºF you could keep your initial planting in the ground for 2 years before harvesting to give the ginger a change to really produce.  After that you could harvest what you needed and let the rest grow.

I’m sure the harvest after two years would be much more bountiful than Jack’s and mine will ever be in New Jersey and Virginia, but that doesn’t deter me one bit. I’ll just have to plant more to get more.

When Jack sent pictures of his beautiful freshly harvested ginger last year, I knew then and there I wanted to grow my own. 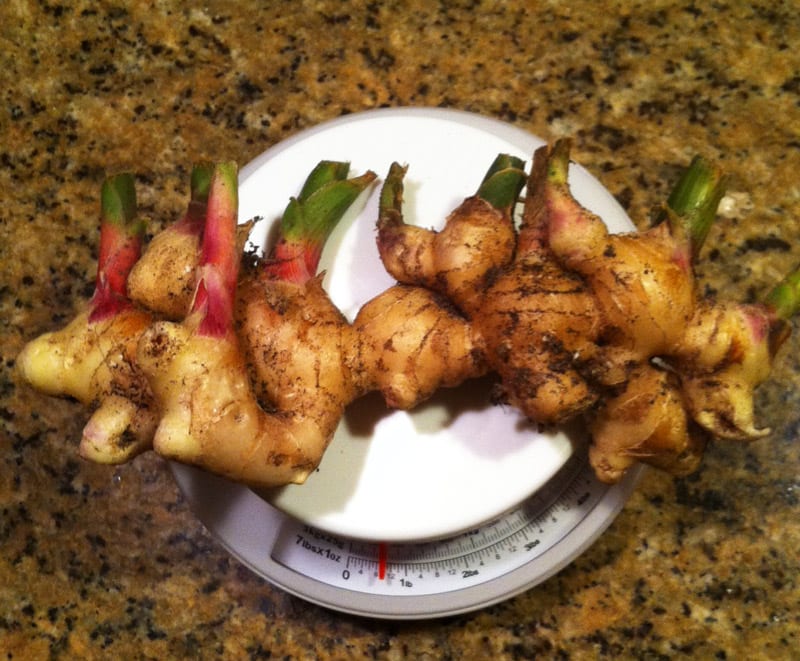 Actually, what Jack and I harvest is probably considered “baby” ginger, because in our climate we’re unable to leave it in the ground to full maturity (at least 8 to 10 months) because of the cold weather. Frost kills the leaves of the ginger plant and can harm the root, so we have to harvest at least after the first light frost.

How Jack (living in New Jersey) Grew His First Ginger

Jack wrote:
“I bought the ginger from a real farmers market — .  I brought it home and soaked it for at least a full day, then lightly scrubbed it just in case it was treated with something…  I recall starting it in my little makeshift hoop house around March or early April.  When choosing the hunk of ginger, I was sure to get pieces with bud nodules.  Once they sprouted I just made sure they were kept moist while (planted) in the 1 gal pots and waited for the outside temperatures to climb into the 70s before taking them out to transplant into ….(the garden).”

… a few things I learned: ginger is a fairly heavy feeder and likes quite a bit of water.  This coming season, I’ll keep 4-5 milk jugs on hand to keep them wet.  Last season I kept 2 gallons close by during the dry spells, even though I wasn’t very mindful of keeping them wet, and they still did pretty well.”

My Mindset in Determining My Growing Method

After reading Jack’s email and looking around at different growing instructions, I made a few decisions before I started.

I knew I wanted to grow ginger, but I also knew I had/have a lot to do in the growing season. I definitely didn’t (and don’t) want to have something else that needs tending.

So I decided that no matter what various instructions said, I was going to attempt to grow it in a manner that fit with what I could do. If the ginger could tend to itself all summer and still give me ginger, then I knew I’d grow it every year.

How I Grew My First Ginger (in Virginia) 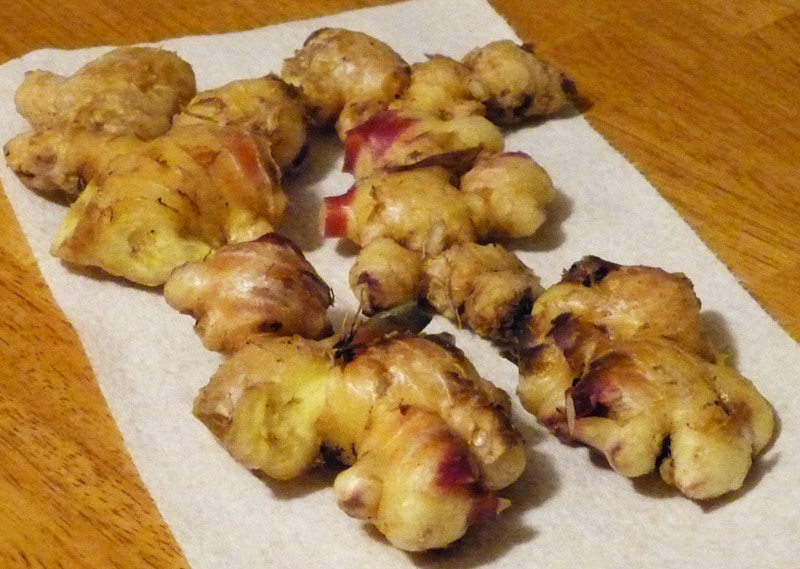 My Second Year – How I Plan to Grow My Ginger

I’ve  given some thought to the information that indicates ginger doesn’t like strong winds.  I’m not sure that protecting it from strong wind is going to get on my priority list.  If I did anything, I would rig up something to protect one plant to see if it made a difference. 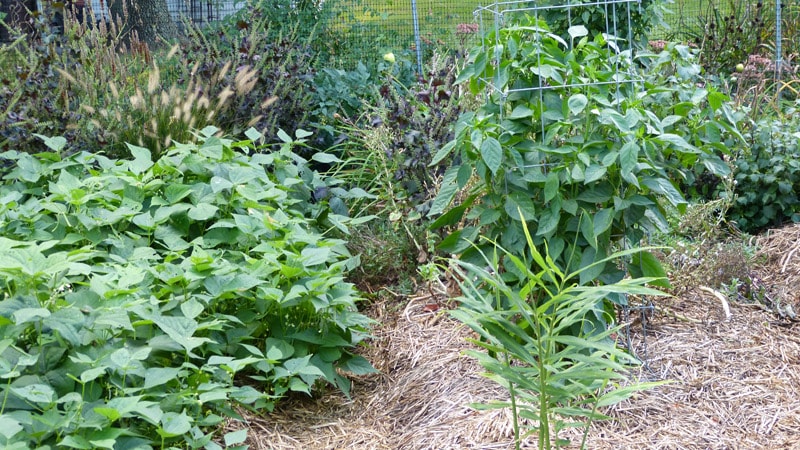 The ferny looking foliage is ginger.  It was about 3 feet tall.  The plant on the other side is a pepper.  I saw later that ginger is not suppose to be planted with solanaceous crops (Tomatoes, peppers, potatoes, eggplants) due to the potential for bacterial wilt.  Obviously, it was not a problem in my garden..

Supposedly, our area is too cold to over winter ginger.  Next fall I’m going to try to overwinter at least two pieces.  My soil has excellent drainage and I figure if I harvest in the fall and replant  a few rhizomes at a depth of about 8 inches in one of the sandier beds and mulch with leaves, it might make it without rotting.  We’ll see.

The second piece I could replant in one of the beds that will have a hoop tunnel over it in the winter.

If I’m successful in having it overwinter, I’ll save myself a lot of time and effort in future years.  If I’m not successful I’m only out a two small pieces AND I’ll know for sure.

A Better Way to Overwinter

If you can, follow Jack’s example and do it a better way. He wrote: “I harvested my other clump (9 oz.) a few days ago and plan to store it (for seed pieces) in some soil mix down in the crawl space where it’s an almost constant 55º-58ºF.”

How to Store Your Harvest

You can keep some ginger for immediate use in a small paper bag in the crisper box of the refrigerator.

You can grate your ginger and freeze for ready-to-use amounts.  Or freeze it whole.  (I wrap mine in Saran Wrap and then place in a ziplock bag.) When you’re ready to use you can grate a piece that’s frozen and then put the unused part back in the freezer.

I hope you’ll be inspired to try growing your own ginger this year.  It’s easy and once you taste the fresh ginger from your garden, you’ll be glad you made the decision.  I was. (Thanks Jack!)