Cucumbers are another vegetable that I don’t buy from the store —- ever!  (No taste unless they’re home grown.) So that  limits my cucumber eating to about 3 months in the year.  I usually get about 6 to 8 weeks from the plants and another 4 weeks out of refrigerated excess.

In past years cucumber beetles have been the bain of my cuke plants  — shortening my cucumber season by spreading the bacterial wilt disease as they feed. One leaf wilts — and then within 2 weeks or so — the entire plant has wilted.

By that time (in most years) we’re in the middle of drought so it’s next to impossible for me to bring newly planted seedlings to maturity — although I try.

I grow two or three varieties each year.  Marketmore has been my favorite from way back when I use to sell for market.  The cukes are just beautiful as well as delicious.

I keep trying “Bush” cukes.  They look really nice to start off but seem to be more prone to some type of blight.  And — I don’t like their fruit as much as the Marketmore.

Diva graced my garden last year and I really liked it!

This year I added General Lee to the list and so far — it’s my all time favorite.

By the way, both Diva and General Lee can set fruit without pollination from the bees. (Known as Parthenocarpic)

I transplanted 3 General Lee seedlings into a  grow bag in the garden on April 25, 2013.  Here it is July 23, 2013 and it’s still looking great and setting loads of beautiful cucumbers.  (No cucumber beetles thus far — except on squash.)

According to a few of  the seed companies (Johnny’s Select Seed, Fedco, and Territorial) this variety was breed for the South but performs well in the North.

It’s said to perform exceptionally well even under stress.   That’s good news for me, since my garden is usually in drought conditions by this time and General Lee will – more often than not — experience stress from drought.

For those of you who are inundated with cucumber beetles — I saw in a video that Johnny’s Select Seeds uses a brand name product called Surround.  It’s just kaolin clay and perfectly safe.

You mix it with water and spray it on your plants. It acts as a physical barrier against the beetle and does not effect the plant’s photosynthesis.  It doesn’t look so pretty — turns the plant grey/white, but it works for  lots of folks – including the growers at Johnny’s Select Seeds.

If you want to try it out, you can buy just plain Kaolin Clay (same thing just not a brand name) from Amazon in a one pound size  for about $9.

( Idea: I’d like to try it on a squash plant and see if it would keep the squash bug away!)

Here’s the link in case you want to watch the video: http://www.johnnyseeds.com/p-6037-general-lee-f1.aspx  (Scroll down until you see the video.)

Johnnys grows cukes up and so do I.  But they go to a lot more work than I do. They prune their cukes and train them to bamboo poles.  In my book — that’s just something else to do that I don’t have to do.

I use either bamboo poles in a teepee shape or one of our old wooden easels and wrap some plastic netting with a large openings around the support. The vines cling to that and do just fine without pruning.  In the picture below — you can see some of the plastic large-opening netting.

You can see the white plastic netting that I wrap around the support if you look closely at this 4th planting of cukes.

It’s so wonderful having cucumbers and eating dinners that are all from the garden.  Makes me wonder how I stay alive in the winter.

If you want something simple but delicious as an afternoon pick-me-up or a side dish for dinner try this:

You’ll be amazed at how delicious the onions are as well the cukes! 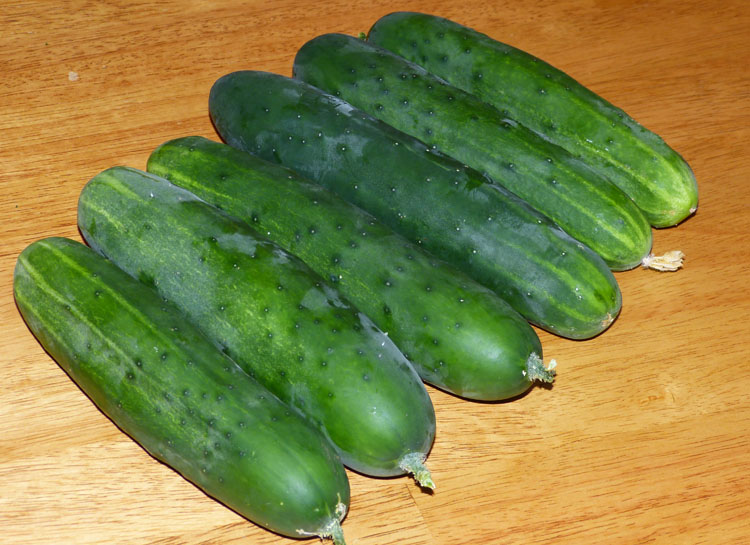 General Lee cukes that look a bit frosty.  I had already refrigerated these and took them out to take a picture.

Other Posts on Cucumbers

Cucumbers – Proper Harvest and Storage can Extend the Season

Squash- Cucumber- Other Cucurbits – Hand Pollinating and Why

All content including photos is copyrighted by TendingMyGarden.com.  All rights Reserved.