The succulent young shoots of asparagus is something asparagus growers look forward to in the warm days of spring.  If you’ve only experienced canned asparagus you won’t relate to that since fresh asparagus are as far from the canned ones as day is from night.

While writing this post I spoke to one of TMG’s readers on the phone.  Forty years ago, she and her husband purchased his parent’s homeplace in the foot hills of Virginia’s mountains. Twenty years prior to that, her mother-in-law planted an asparagus bed to which my reader has added several roots. Every year she adds composted manure from her horses that is free of residual herbicides.

The bed is still producing after 60 years!!

If you don’t have asparagus and if you’ve been gardening for a while and have improved your soil to where it’s friable, loose and rich in organic matter you’re ready to plant an asparagus bed.

With a little patience you’ll have a planting that provides tender, succulent asparagus spears for many years to come. Even if your bed doesn’t produce for 60 years you can probably certainly count on 15 years or more. 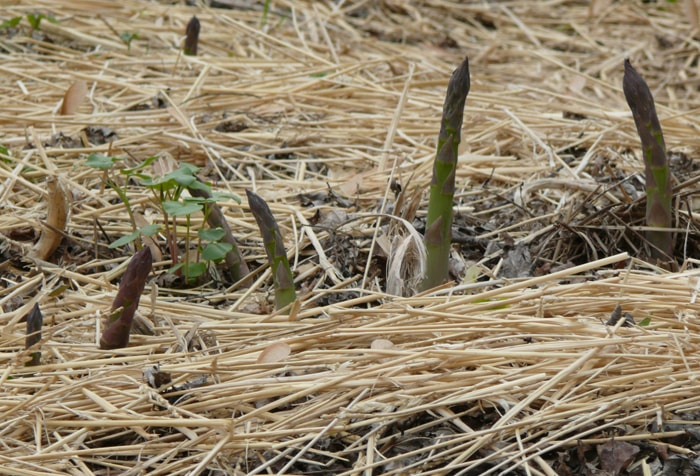 Spears of asparagus coming up in April (and also a ‘weed’ that needs pulling.)

How Many?
About 10 roots are suppose to be enough for 1 person.  I have about 30 plus roots in my asparagus bed.  Every day there is good growth, I pick and eat asparagus during the 8 week season. This amounts to about 45 to 50 days, with some days yielding a double amount.

If there are 2 or more in your family, start out with 24 plants if you have the room.  If you don’t have much room, start with 10 roots to at least give you a taste of this delectable vegetable each year.

What Kind?
I would recommend the predominantly male plants of Jersey Knight that put energy into producing spears rather than berries and seeds. (update Jan. 2017 – I no longer recommend hybrids.  See this post.)

I also have a few of purple asparagus that in my garden are always bigger than the others.  It’s been so long since I planted that I have forgotten their name — but I think they were (are) purple passion.

Planning Your Bed
When you plan your bed don’t crowd it and leave at least 3 feet between rows (4 feet is better) that run parallel to it.  The powerful roots of asparagus can spread laterally for several feet over the years and they don’t like competition from weeds or other deep and long rooted vegetables.

If you’re not ready to plant, but are planning for next year, till in organic material such as compost or manure the fall prior to planting.  Or – try sowing a green cover crop like buckwheat or vetch. And till it in before it blooms to serve as organic matter.

Soil that is friable, loose and rich in organic matter insures good growth.

When you plant in the spring, take care not to expose the roots to the drying sun or wind.  If you’re going to plant more than one row, cover the roots before going on to the next row.

There is quite a bit of information now about planting at various depths (some very shallow and some deep) to extend the harvest.  I recommend only planting deeply.  Planted deeply, the roots can draw in the necessary moisture especially after their first season. This seems to me a good precaution especially in an area where drought is common.  (For an update on my thoughts about “only” planting deeply see this post.)

In addition, I’ve noticed that roots tend to work their way up and don’t necessarily stay at the planted depth.

Basic Rule of Thumb regarding Harvest:

There are always circumstances that require different judgments. Let the size and number of shoots determine the actual harvest. Do not harvest small slender stalks pencil size or less.

Example:
I have several roots that are not in a good spot.  They have spread into underground wire (placed to deter digging by rabbits and groundhogs) at the edge of the garden.  In addition, roots from our neighbors trees that are many yards away, continually try to encroach that section of the garden and compete with plants.

Asparagus don’t like either situation. In the spring these particular roots send up pencil thin stalks while the rest of my asparagus are twice or three times bigger.  I don’t pick these small stalks.  Later in the season, they start sending up good sized stalks which I harvest.

There are other ways to handle the above situation:

I could go ahead and pick all the stalks that these roots send up if I was not concerned about loosing them.  (I have another asparagus bed planned for this year.  So eventually it will not matter about these several roots.)

Also I could move the roots if I wanted,  although I might have to treat them as if they were a first year plant.

By the time spring arrives, most of the thick layer of straw and leaves that I applied last year have dwindled to a thin layer, but still enough to protect my soil.  If I don’t apply additional mulch, the asparagus will come up earlier than if the bed were heavily mulched. But I usually go ahead and mulch deeply in the interest of time and getting the job done.

It’s not usually possible to harvest everyday, since asparagus spears don’t grow on the cold days in spring, but I harvest everyday they grow. Spears grow quickly when its warm.  If you miss them one day, they may be two feet tall the next day and past time to harvest. 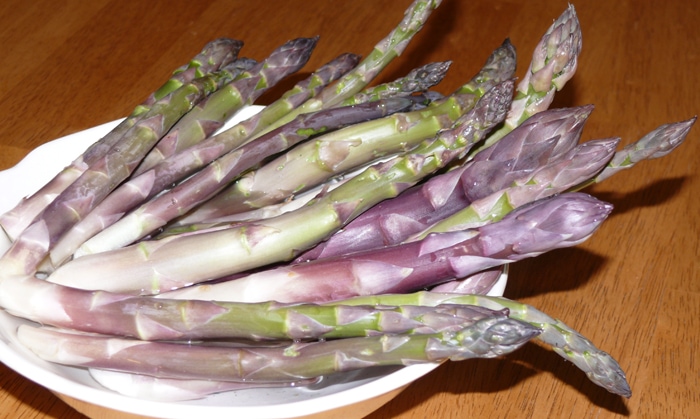 Snap or cut the asparagus at ground level.  Be careful not to injure tomorrows spears which are now buds just below the surface.  Harvesting at 5 to 8 inches will give you spears that are tender.  If you harvest at 8 to 12 inches you’ll have to cut the tough bottom part off.

One precaution:  As the season progresses high temperatures and continued harvesting will cause the roots to produce a lot.  This can lead to an eventual decline in the vigor of the plant, but you can prevent this by keeping the soil cool.  If you haven’t already done so, this would be the time to apply  an even  thicker layer of mulch. It will slow production to normal and increase the spear size.

These little beetles have in the past been the bane of my asparagus bed. If they get out of control they will strip the ferns and even more importantly can greatly reduce the following year’s yields.

I start watch for the little monsters the minute the spears start showing themselves.  I watch the new spears for tiny little black eggs that stick up maybe 1/16 of an inch.

If you’ve havested the spear you can easily rub or wash them off after you get them inside.  If it’s a spear that is going to be allowed to grow, gently rub them off when you see them.  Check everyday.  Believe me once they’ve had a population explosion it can be a nightmare.

After the ferns start to grow, continue checking for eggs, adults and larvae. Although larvae are about 3/8 inch long  and dark grey they can be hard to see on the ferns. Be diligent everyday.  Look, find and smush.   The most rewarding days will be when you don’t have any asparagus beetles, eggs, or larvae.

I had to wait until my asparagus were of harvesting age to experience that wonderful feeling.  There was one year that I didn’t see any beetles.  Last year there seemed to be a lot. 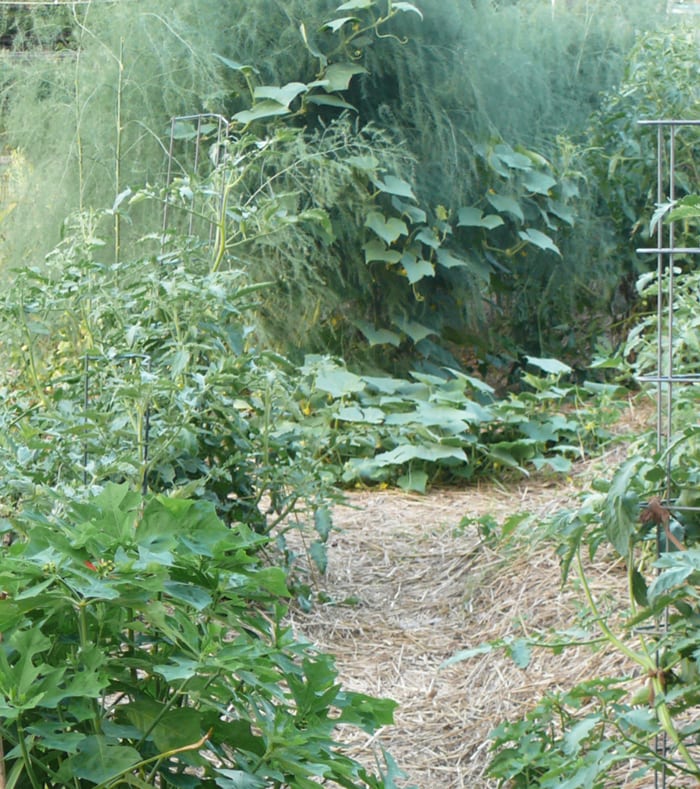 My asparagus fronds in the back ground are so thick a cuke is climbing them. Tomatoes are planted close by. This was taken in July in drought.

The asparagus ferns are needed to make the energy that the roots store. Thus, never cut or remove the foliage until the asparagus is completely dormant.  That can be as late as February in my garden.  Fern tops will be dry and yellow.  Cut stalks at the base.

Conventional wisdom says to remove from the bed because the stalks might harbor asparagus beetles.  Years ago I use to do that. Now,  I just cut them a bit so they’re manageable and leave them in a path or on top of a bed to decay.

If you have not already done so, add a thick layer of mulch, leaves, and/or composted manure to your beds.  I no longer have access to manure, but decaying straw and leaves has added enough organic matter to my soil to keep my asparagus happy.

If you don’t have any asparagus planted, I would encourage you to order now and prepare a permanent bed for them prior to their arrival.  Time goes so quickly and by ordering now you will be a year closer to enjoying this delicious and healthful vegetable.