After being able to plant crops for fall in August this year — a first for me because of the rainy weather —- I ended up loosing a lot because drought conditions that arrived late and prevailed during September.  The good news is just as many things made it.  Now I have lettuce and various greens in 5 stages of growth because of 5 succession plantings.

I’ve been trapping rodents intensively for the past few weeks and think I have — at least temporarily —- removed them from rows with my winter/spring crops.

Far left top corner is dandelion green.  Bed to left shows cover crop of purple tansy.  Middle bed of lettuces and greens is now covered with hoop tunnel.  Upside down flower pots are where I was trapping.

Some leaves are in the garden, but most still need to be raked.

I planted Lacy Phacelia (purple tansy) as a cover crop in various beds in August.  After it winter kills, I’ll add leaves and straw on top.

Even my grow bags have a cover crop in them.  (Alfalfa.)  I’ll cut it very close in late February or early March and lay the biomass on top of the root stubble.  Then I’ll add thick layers of leaves and straw on top of that.  Should make a very nice home for some warm weather crops next May. 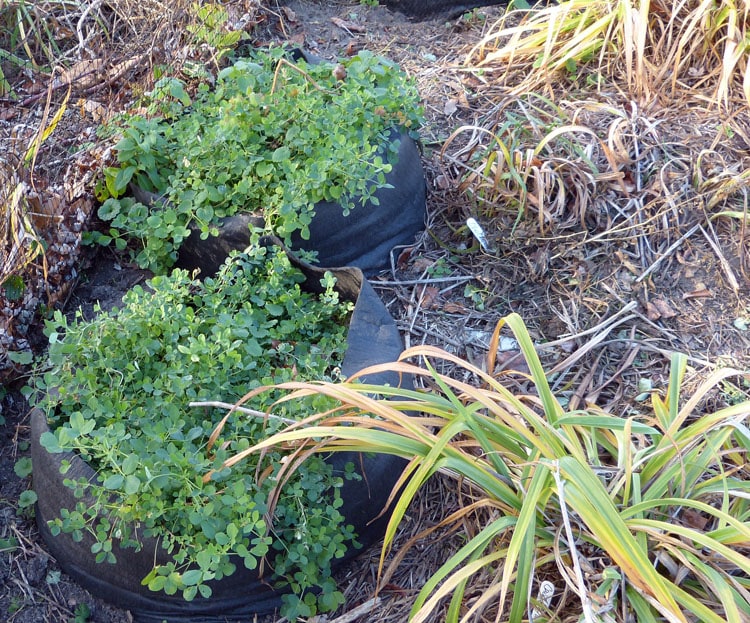 The forecast called for high winds and night time temperature in the 20s off and on throughout the month starting last night. So I knew I’d loose some things if we didn’t get the hoop tunnels up.

Bill spent about 3 hours Friday afternoon placing and securing the hoops for 5 hoop tunnels. While he was doing that, I picked enough lettuce to last for more than a week.  Also various greens. 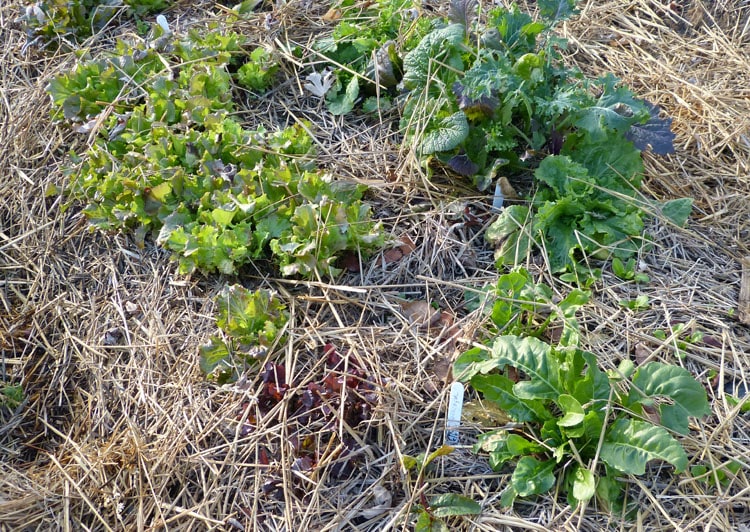 I’ve been picking the lettuce and greens in this bed since September.  More than likely this is where most of the winter pickings will come from.

We both worked 3 hours on Saturday to cover the hoops with greenhouse plastic and secure it with clips and bricks to weight the sides and ends.  When I checked Sunday morning – everything had made it through just fine in spite of the high winds. 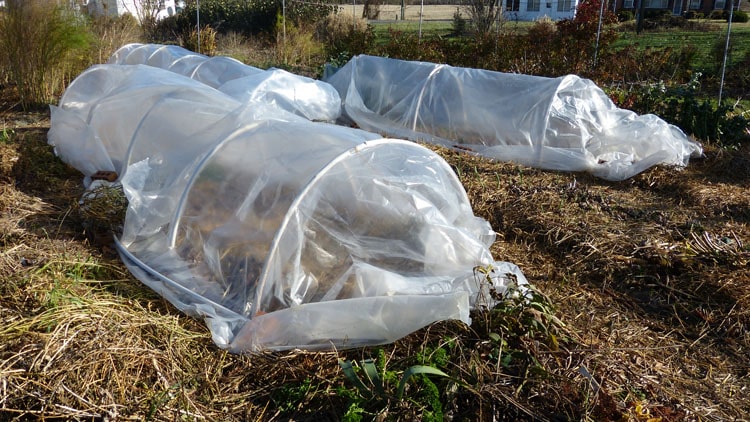 The three tunnels at the lower end of the garden. Garlic bed is between the one of the left and right.  Garlic is up about 6 inches.

I still have some things uncovered that will probably do just fine through winter: chard, tatsoi, russian kale, mache, cress, cutting celery, some cultivated dandelions, and few other hardy greens that I don’t know the names of. Also have a few beets under the cover of straw. 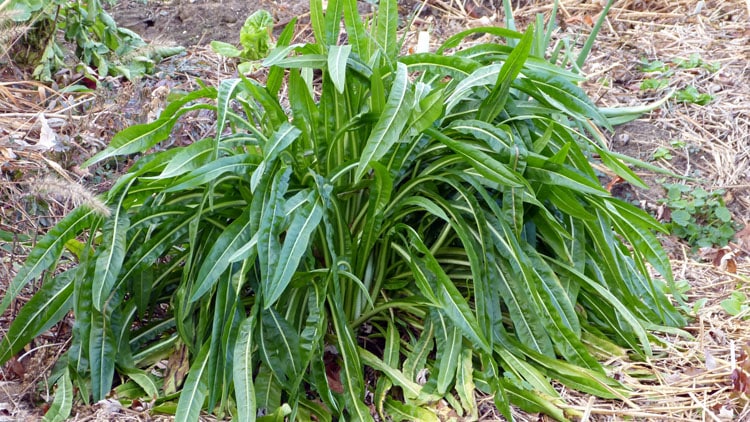 Cultivated Dandelion greens. No room for this in a hoop tunnel. The plant will make it, but green may have to renew itself. 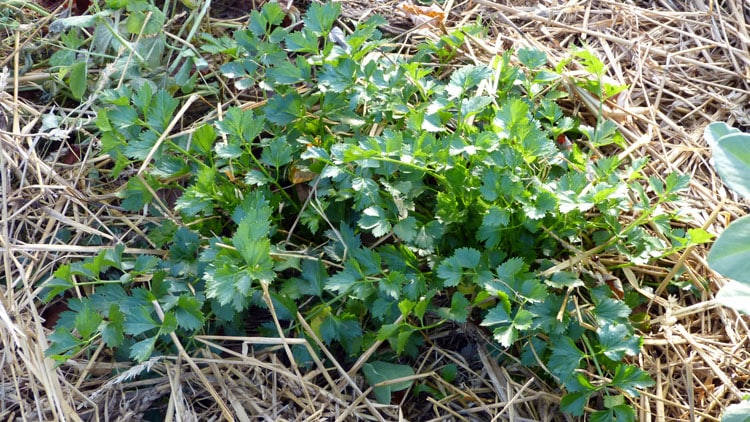 Alice, a reader out West, put me onto cutting celery.  I started it via wintersown in February last year, transplanted it in various places in May, and ended up with several gorgeous plants.  I’ve mulched it heavily and hopefully it will make it through.  It’ll stalk and seed like parsley does and I’ll save seed.  In the meantime I’ll plant more this February. Great for cooking when you want the flavor but don’t want to buy celery. 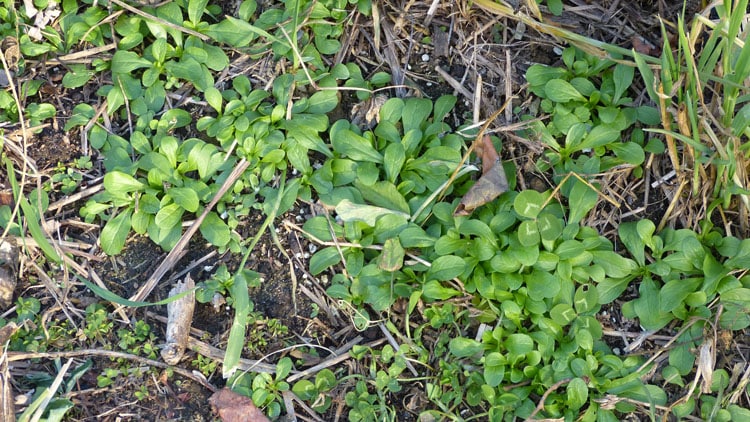 My Mache that I planted in flats did not germinate.  The Mache above reseeded from last years plants and I was thrilled.  Never can get enough of this delicious winter green to suit me.  Its leaves are tiny, so you have to pick a lot.  Really great in salads. 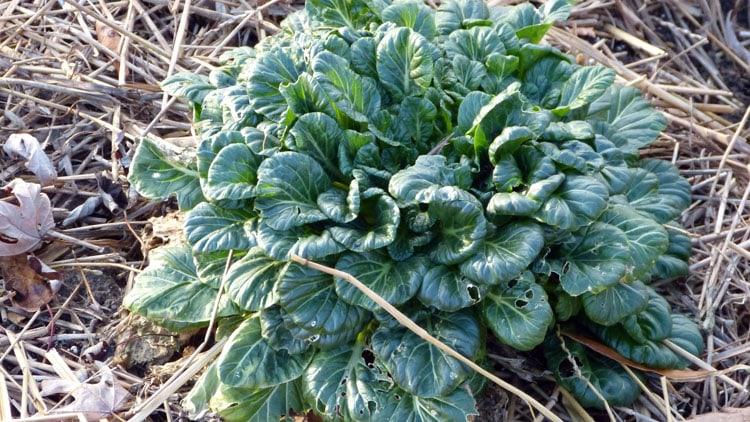 This Tatsoi Bok Choy has been in the garden since last spring!  When I harvest – I pick EVERY leaf and it’s renewed itself at least 5 times since I’ve been picking it.  (It was so beautiful I didn’t want to pick for a long time and was sure happy when it almost instantly renewed itself.) I’ve fall planted ones in other garden beds.  Very nice when sauteed with olive oil and garlic. 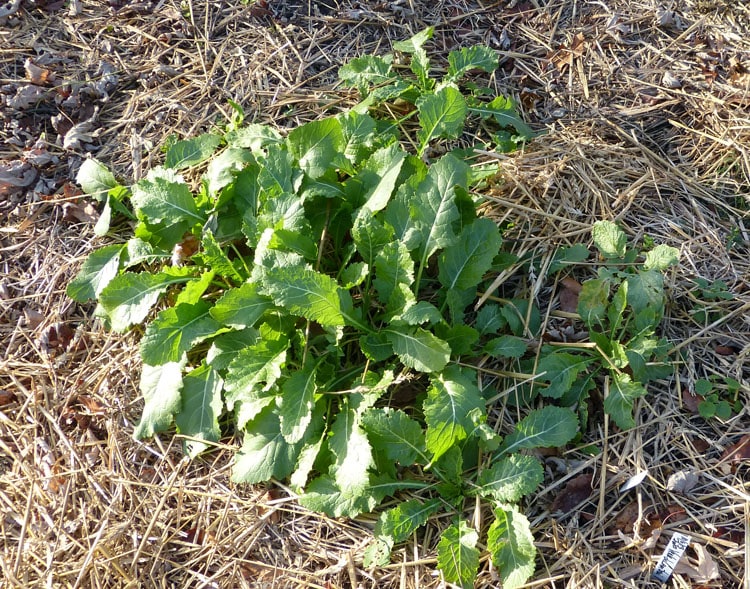 This is what remains of my Hakurei turnips planted in September.

I’m out of onions except for the spring onions planted this fall.   (Usually I get through until January with fresh onions) 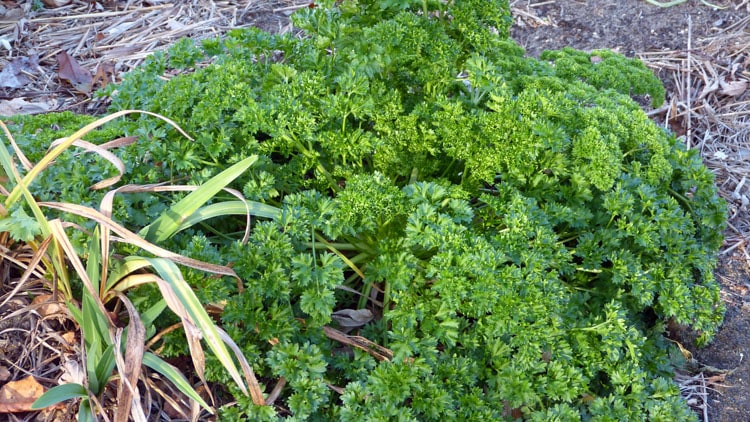 Most of my parsley plants have been “flatened” by the cold by are still ok.  This one looks so great and it was greatly positioned to fit under the long hoop tunnel shown in the picture below.

These hoop tunnels are at the upper end of the garden.  The long tunnel houses the greens I’ve been picking since September, the parsley and also some new plantings of lettuce.  The green “stuff” in part of two beds is Phacelia (purple tansy). The end of the middle bed has spring onions in it.  You can barely see them in the picture, but they’re up a few inches 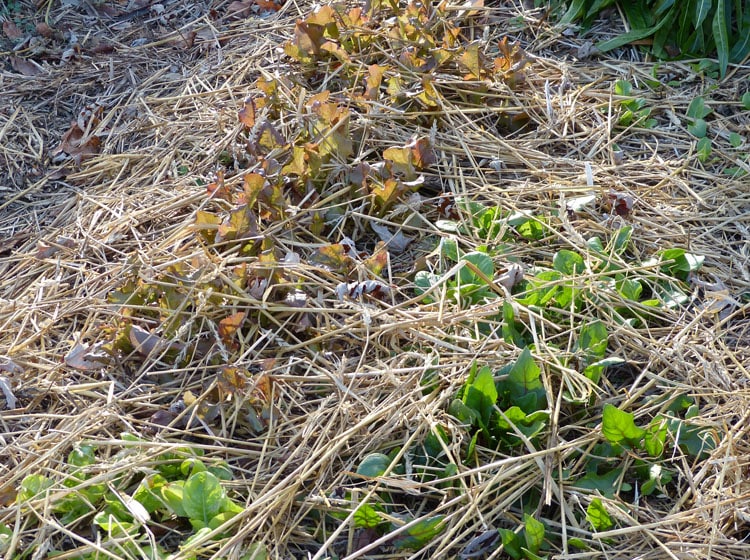 This bed has 4 varieties of lettuce, spinach and baby swiss chard.  Its under the short hoop tunnel to the left in the picture above this one.

I started several more varieties of lettuce, some spinach, onions and beets a couple of weeks ago in jug bottoms rather than flats.  I put those under the hoop tunnels this morning.  When we get a warm day or two I’ll transplant in beds with the protection of the tunnels.  This planting and the previous planting probably won’t do a lot of growing until early spring.  Then they’ll grow quickly and tide me over while I’m waiting for other spring plantings to mature and the August plantings are about finished.

Plastic Left Off when Conditions are Good

Expecting rain Tuesday and temperatures in the 40s.  I’ll roll back the plastic on the tunnels and let the rain get into the beds. Then will cover again for the freezing temperatures.  When it’s nice weather and moderate at night I’ll leave the plastic off.

Hope your enjoying a fresh-from-the-garden salad on Thanksgiving along with other fresh or preserved bounties from the summer and fall.  Happy Thanksgiving! 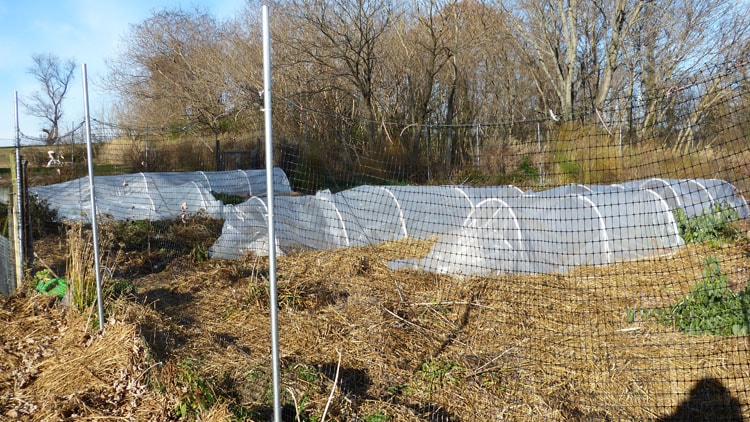 Looking at the garden from the lower end. 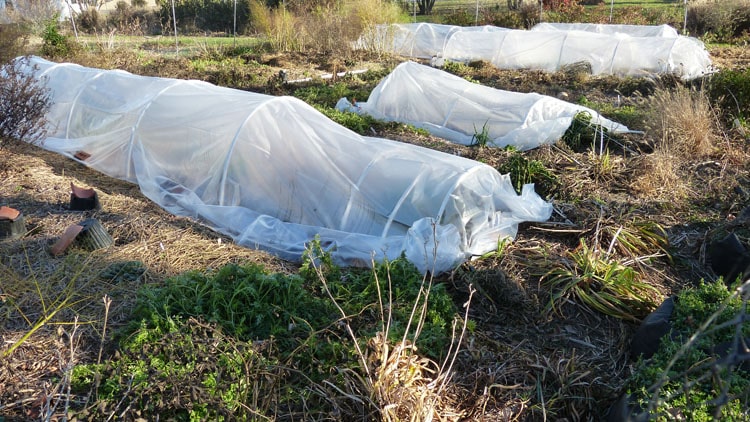 Looking from the upper end.

All copy including photos is copyrighted by TendingMyGarden.com.  All Right Reserved.