Last year in September, the month before Bill died, our friend and reader, Jack in New Jersey, sent us a package. Bill always loved packages and had a kid’s heart when it came to gifts and unopened boxes.

Much to our delight Jack had included a pint of home preserved D’anjou pears from his 3 year old tree’s very first harvest! He also included two each of Clear Dawn and Mako onions that he grew from seed. Boy, were they impressive!

But the main attraction was numerous garlic varieties for me to plant and try. Each was beautifully packaged in crisp little paper bags with the variety of the bulbs or bulbils (from his garden) written on each.

Bulbils are the little seed like garlics that develop in the “pod” at the top of a garlic scape.

You might remember Jack from this post https://tendingmygarden.com/gardening-with-kids-workin-over-the-brocolli/ and his granddaughter, Ellie, who was doing a taste test of the brocolli in his garden. I love hearing him laugh at the end of that 23 second video clip.

I’d never given one bit of thought to planting garlic from bulbils until Jack sent them to me and shared some of his experiences with them.

It takes two to four years (depending on the type of garlic) to bring bulbs to mature size when starting with bulbils. But there are a number of reasons that make growing this way appealing.

I planted the bulbils in late October.

I followed Jack’s example and planted 3/4″ to 1 inch deep. (Some varieties produce bulbils that are only the size of a rice grain. If you plant those plant at a more shallow depth.)

When planting, Jack had spaced 4 inches apart (as opposed to cloves which he spaces 8 inches apart) and mulched with 3 to 4 inches of shredded leaves.

Mine were spaced more like 3 inches apart and mulched with 3 inches of leaves and straw since I didn’t have enough leaves to make the full 3 to 4 inches.

My difference in spacing probably accounts for my resulting bulbs being smaller —  1 to 1 1/4 inches instead of 1 1/2 inches like Jack’s. That doesn’t sound like very much, but when you actually see the difference it’s significant.

(Keep in mind that spacing is not the only consideration for size of the resulting bulb at harvest.  Soil rich in organic matter is extremely important to size.)

This year, I harvested garlic over a period of about 6 weeks.  I had the hardest time determining when I should lift them.  Many I pulled were premature, but not one was wasted and they were all delicious.

Some varieties mature more quickly and I also found that ones from bulbils were ready sooner than the larger bulbs.

Jack cuts most of his scapes when they’re young and tender for use in Pesto and/or stir fry dishes. Scapes are left on a few plants from each of the varieties so the bulbils will continue to grow. (These will contain the bulbils that he’ll plant in the coming fall for harvest next year.)

At harvest time they’re cut off (on long stalks) and stuck into a vase of water where they will continue to grow to max potential for an extra two weeks. 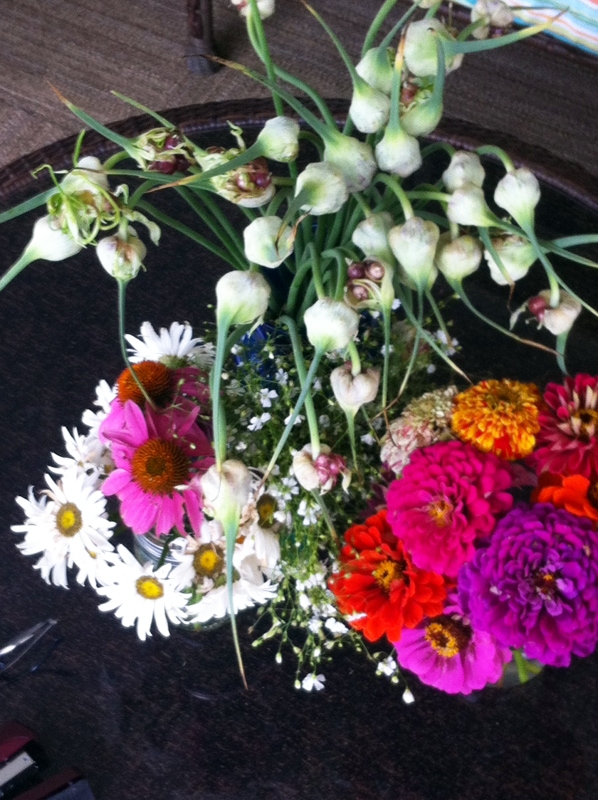 Jack’s garlic scapes in a vase of water with his wife’s zinnia arrangement.

He then hangs them to dry for 3 or 4 weeks and they’re ready for fall.

My Approach to Curing Bulbils

During June, waves of grief for Bill were so overwhelming that I did most everything in the garden in the “automatic” mode.  In other words, not a lot of thought went into anything I did then.

Thus, I never even looked back at Jack’s emails to see what he had done. I left the plants with their scapes and bulbils intact as they cured.

Even though my approach had been totally different, my bulbils continued to mature even after harvest! I was really surprised when the umbil sheath around the bulbils burst open and exposed the beautiful bulbils.

I have just recently snipped them off and will keep them in a cool, dry spot for planting in the fall. 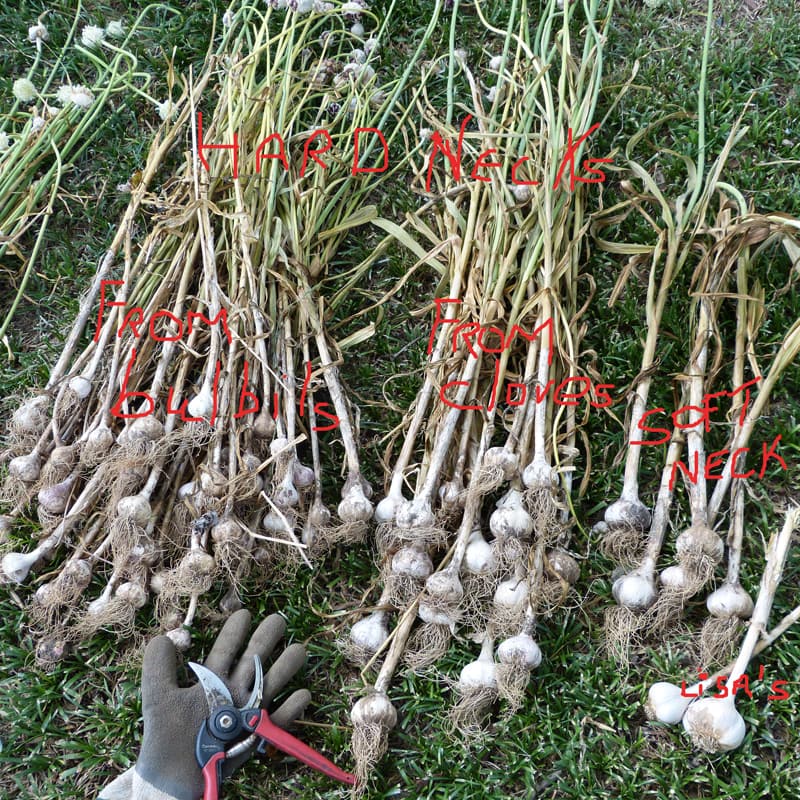 I hope you can read what I tried to write in red using photoshop.
Most are hard necks. The group on the left was from bulbils. Both groups on the right were from cloves.
On the far right are 5 soft neck garlics that I think are Kettle River.
And the two in the right hand corner are Lisa’s Taylor garlic that I showed you in another post.
(I included those just for comparison.)

Variety Identification – In spite of my efforts to mark the plantings and make sure I could identify my harvest, they all ended up together and I don’t have a clue about which was which except for those soft necks which I think are Kettle River. Henceforth, all garlic grown from this recently harvested garlic will be known as Jack’s garlic. 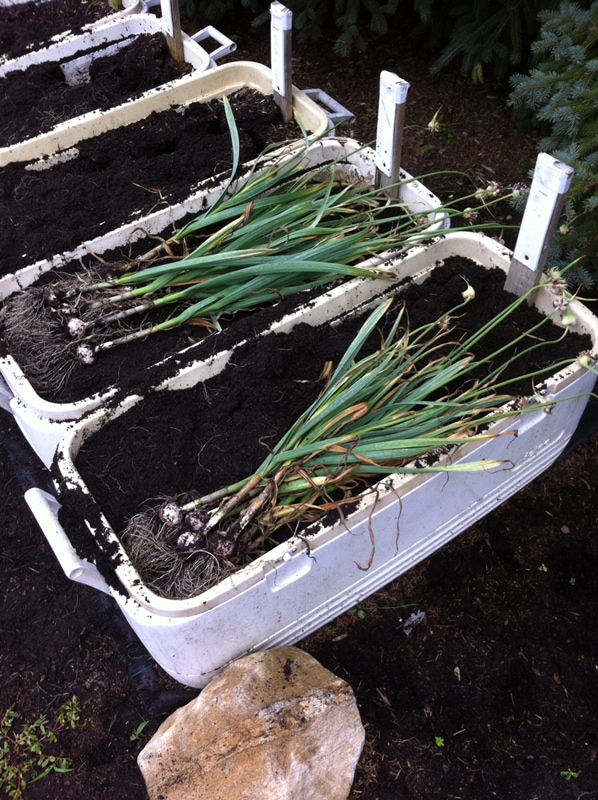 Approach of  Some Professional Growers for Curing Bulbils

Growers will usually designate a certain number of bulbs from which they will harvest bulbils. Rather than harvesting those bulbs with the rest of the crop, they leave them in the field for a few weeks to continue to grow until they’ve burst open the umbil sheath around the bulbils.

One of the advantages of growing from bulbils is that it thwarts the transmission of soil-borne diseases if bulbils never touch the ground. Thus, growers will harvest them before the danger of that happening;  cutting on long stalks and tying them in bunches to be hung to dry (cure).

After that, bulbil capsules are snipped off and stored in brown paper bags.

How Many Bulbils per Capsule (or umbil)?

Depending on the variety of garlic, there can be 10 to 100 plus bulbils per capsule (or umbil). Generally, the less bulbils produced the bigger they’ll be.

Most varieties that fall under the subspecies Porcelain and standard Purple Stripe have small bulbils.  The popular variety Music, a Porcelain, produces grain sized bulbils and about 100 per umbil.

Many of the varieties in the Rocambole Subspecies produce much larger bulbils. 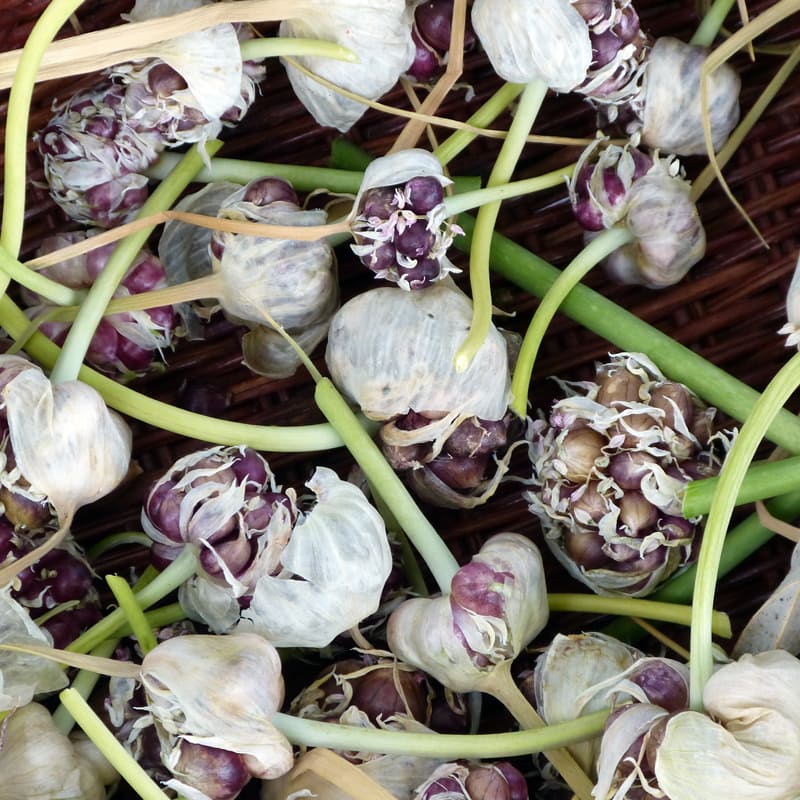 When I harvested the garlic these  umbils were tight and closed.  You can imagine my surprise when they increased in size and opened.

As you already know if you’ve bought garlic online, there’s a lot of diversity.

Softneck garlics are usually what you see in the supermarket. They keep longer and are also the ones you often see braided. Overall their cloves are numerous, but smaller.

They don’t produce scapes normally, although it is said that when stressed they can sometimes produce a scape and bulbils.

Hardneck garlics usually have fewer cloves, but larger ones than softnecks. They’re the ones that send up scapes that produce the bulbils.

Then there are different types of garlic – referred to as subspecies. Some are:

There can be numerous varieties within a subspecies.

Many that Jack sent to me were Rocambole types: Penasco Blue, Temptress, Merrifield, Martin’s Heirloom, Hnat, and German Red. (All hardnecks.)

Rocambole is said to have more complex flavors and be one of the finest tasting of all garlics.

As I mentioned previously, the popular variety Music is a Porcelain.

If you really want to know more about the variety of garlic you’re planting, it can be interesting to do a little research to know the overall characteristics of the variety AND the subspecies that it belongs to.

The Basic Idea for Planting Bulbils

I hope I’ve inspired you, as Jack inspired me, to grow some garlic from bulbils.

And don’t limit yourself to growing one variety.  There are so many to try before you’ll know your favorite.

All content including pictures are copyrighted by TendingMyGarden.com.  All rights reserved.