By seeing what others do and learning what they’re experiencing, we can build a knowledge base that will help us in our own gardens.

That’s the purpose of this post.  I’ll focus only on the main things going on currently so this post won’t get too long. Other things I’ll cover at some other time.

Welcome to my early June garden.  The picture below was taken at the entrance to the garden looking to the left which is the upper end. 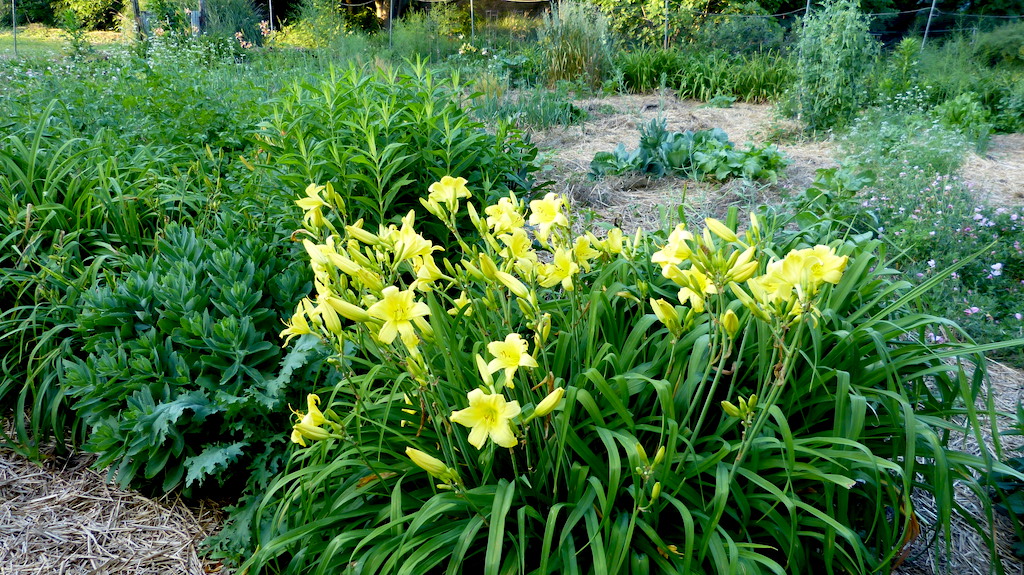 To take this picture I was standing in the entrance path looking to the left which is the upper end of the garden.

You might recall the first picture in my May 9th post on restoring fertility to the garden.  Pictured was a 2 x 2 foot mound of peas planted in one of last year’s piles of decayed plants.  In the picture above, the right hand top corner, the tallest green is that mound, grown over 5 feet tall.

I apologize for all the sunlight in the back, but I had to take the picture when I could in spite of that.

As you may be able to tell the peas are already a foot taller than the supports I provided. And as you can see are loaded with peas. 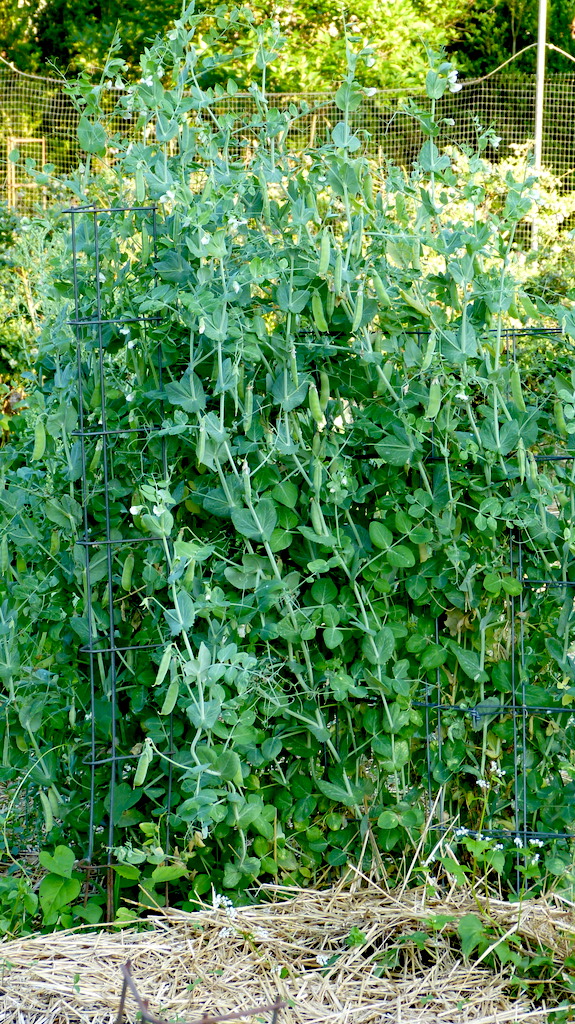 It was difficult to find seed for Green Arrow peas this year although I didn’t think I’d have trouble in January. I did find some, but I ordered a couple of additional varieties to make sure I had enough.

Everything up to that point was based on what I usually order and plant. It was more out of habit than thought.

After I planted a small section of a bed with peas it dawned  on me (thankfully) that what I was doing out of habit may not be the best approach for my current situation.

Reasons why I needed to adjust what my planting and harvest strategies would be:

Fortunately there were other considerations that made the decision easier:

More than a gallon of beautiful and delicious peas are in the freezer from last season.  And I have probably 2 gallons of blueberries. More than enough to take me through the winter if we don’t lose power for an extended period.

A good take away:

Always consider what you really need and what you can realistically harvest and use in the time you have. It’s a waste of your time and money to do otherwise. Not to mention the stress it causes most gardeners when they have more than they can do.

Getting Serious About Cabbage

Cabbage (along with carrots) is a main stay for me.  Since 1 cabbage lasts 3 to 4 days and usually 3 to 4 carrots  are used every day it’s impossible (for me anyway) to grow and store enough to keep me going all year even with rationing.

Six smaller seedlings were held in their container until  late fall and then transplanted.  Noticing  they had disappeared  in late winter I planned the spot for something else. Was pleasantly surprised in April to see they had NOT disappeared but were robust and growing.  Only one did not head.

At this point the others (4 shown below) appear to be about 3 1/4 pounds like ones I’ve already harvested from the spring planting. 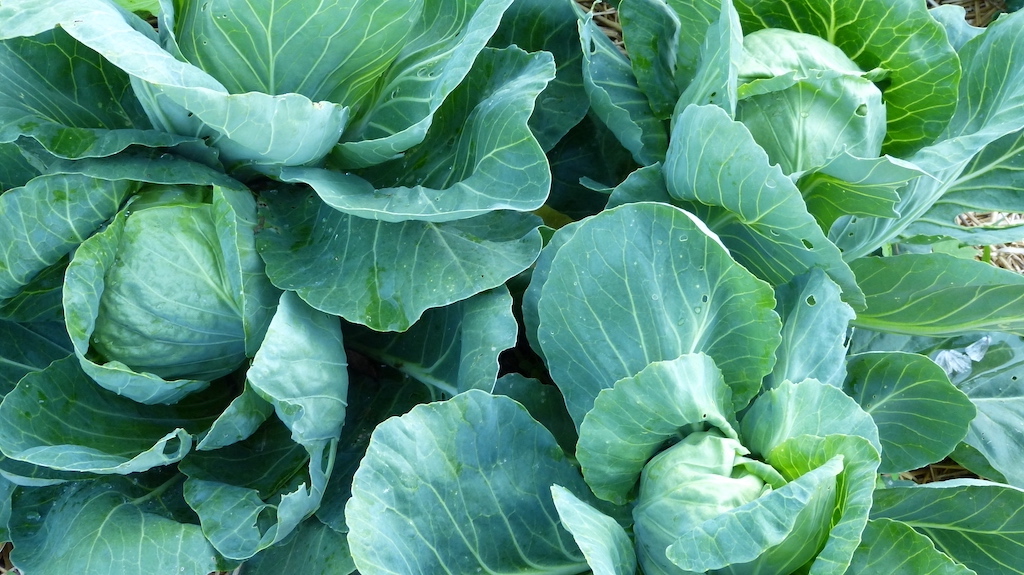 Started in February and Transplanted in Late March

Cabbages shown below were started in late February and transplant to the garden in late March. Most are heading and look good.  A few appear not to be doing much, but I can always use the leaves. 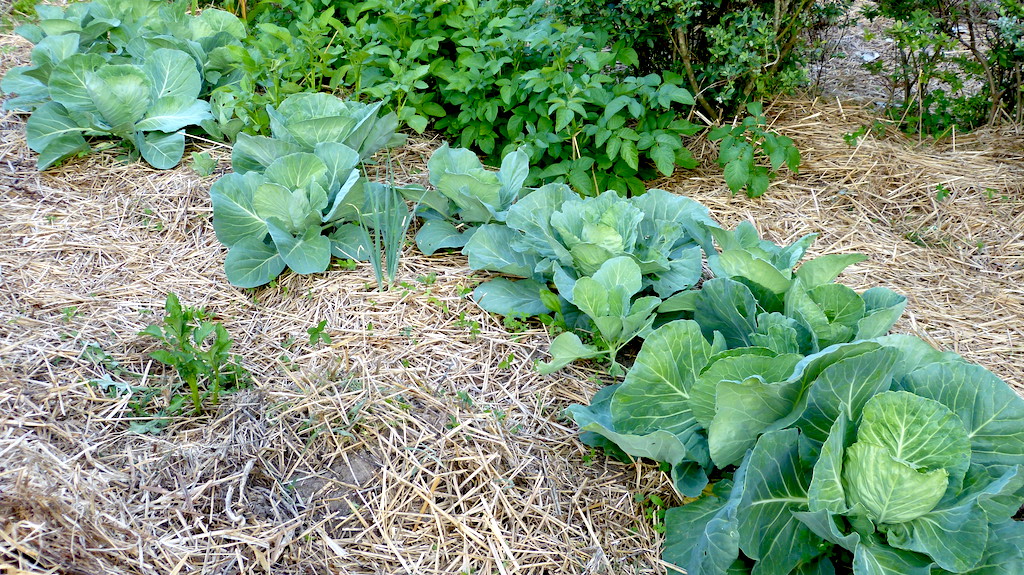 Cabbages transplanted to the garden in March. This picture was taken May 31, 2022.

Below is the cabbage shown in the lower right hand corner of the picture above after it was fully developed. The head weighed 3 1/4 pounds and was just beautiful — AND delicious! 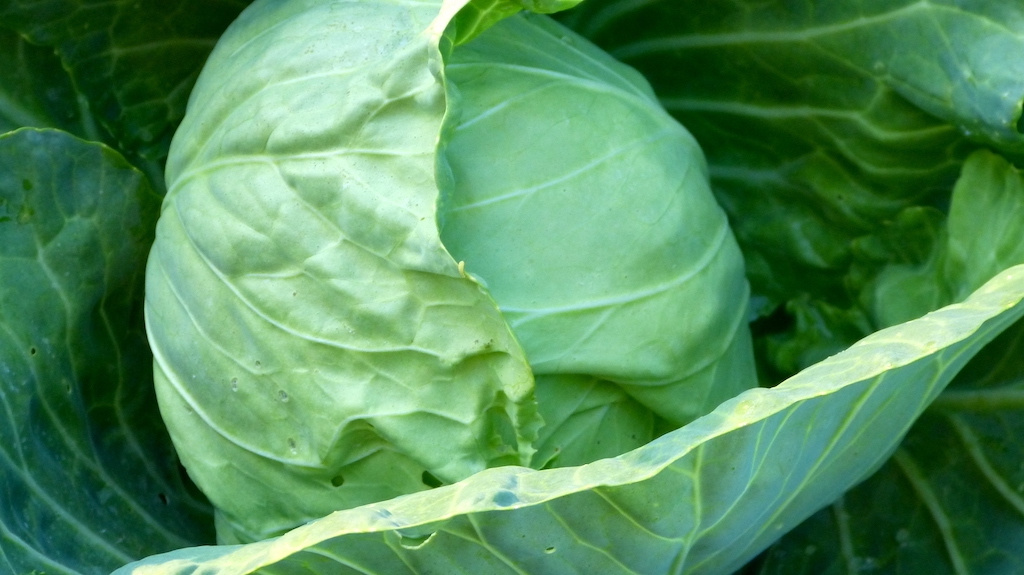 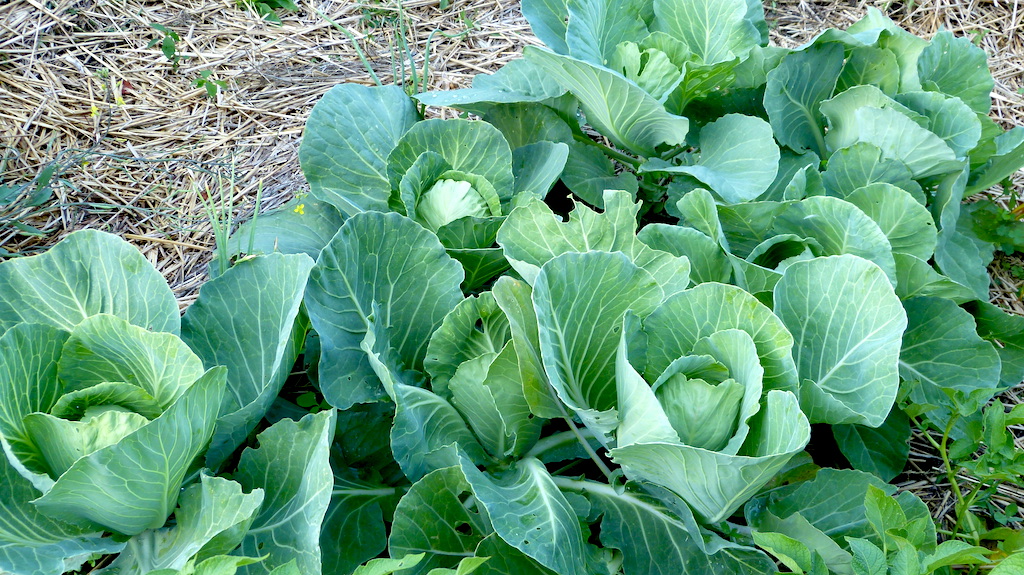 These cabbages are at the end of the same row but planted a couple of weeks later.  They are still developing but look good.

Lettuces and Late Planted Onions, Plus 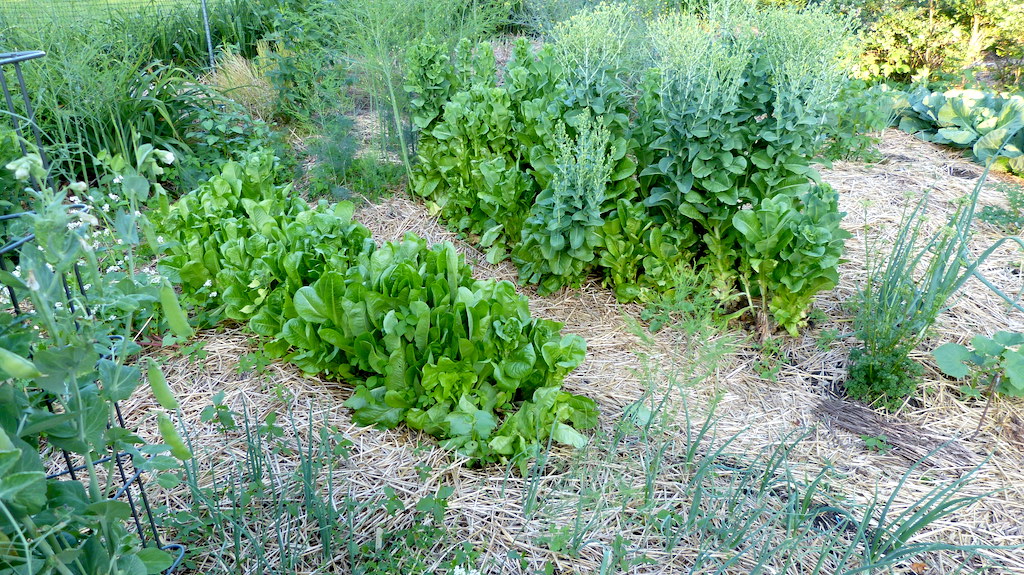 This picture was taken to point out lettuce planted last fall setting seed and spring planted lettuce starting to stalk. (I have two more rows of wintered-over lettuce on the other side of the garden.)

Also, when I planted onions in March, I ran out of room and had about 50 seedlings left over. They sat in their little container until May 15 before space (although tight) became available. Although it’s too late for them to reach maximum size, they’ll be great to use for sets in the fall. That way I’ll have “spring onions” well into winter. 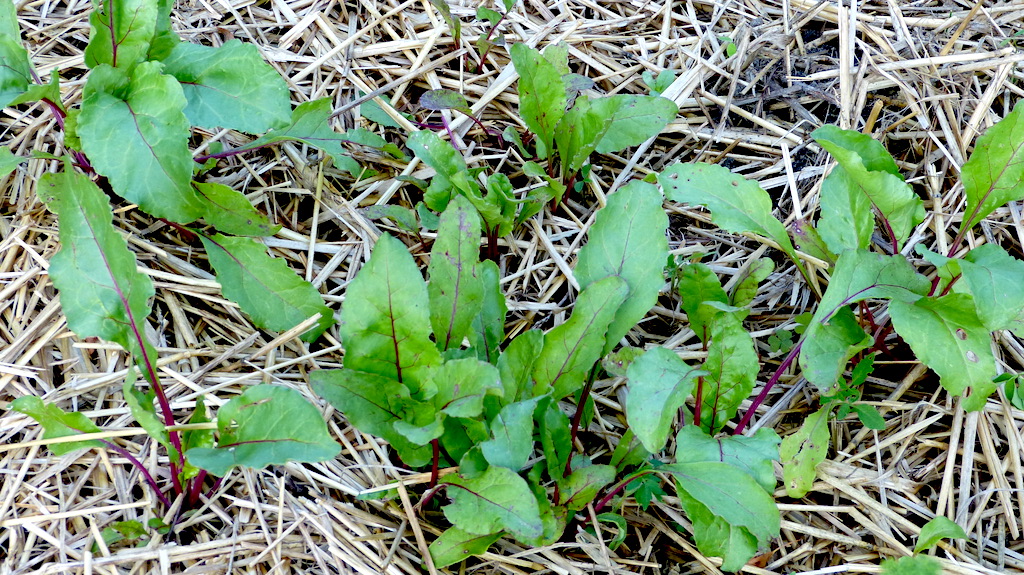 Beets are great for use in nutritional drinks.  You only need a small piece of beet to juice with lots of carrots.  Delicious.

About 25 is what I usually grow, but will increase that to 50 this year.  Roasted. beets are delicious. Sometime I’ll roast a large one to cut in quarters and add to my chopped veggies over a four day period.  Sometimes, if I have some great butter on hand to slather on the roasted beet, it never makes it to my chopped vegetable meals.

Beets  were planted in two spots. These in the picture above did fine.  Flea beetles devoured the foliage in the other spot. Often plants will outgrow the damage, but not this time. I’ll plant more this week.

At our previous garden (in improved clay soil) radishes grew more quickly and in abundance. Never had to ration and could pick as many as I wanted each day and be assured there would be plenty more to follow until it got way too hot for them.

In our current garden (improved sandy soil) radishes grow, but not in the abundance we were use to.  And some never fill out.  But, as you can see in the picture, some find conditions satisfactory. 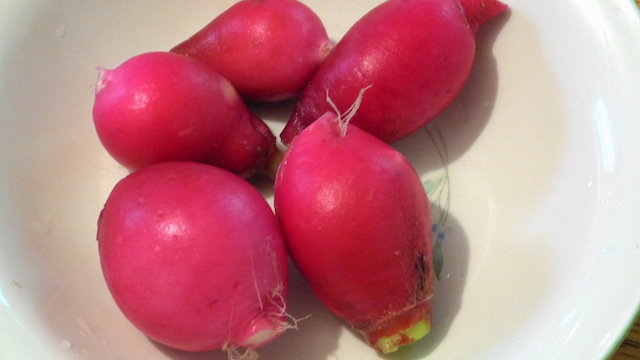 radishes for the days meal

Marketmore is my favorite all around cucumber. Open pollinated so I can save seed. Big, beautiful, and delicious.  What’s not to like!

These came up from seed dropped last year rather than from those I saved. So I didn’t have to start any. 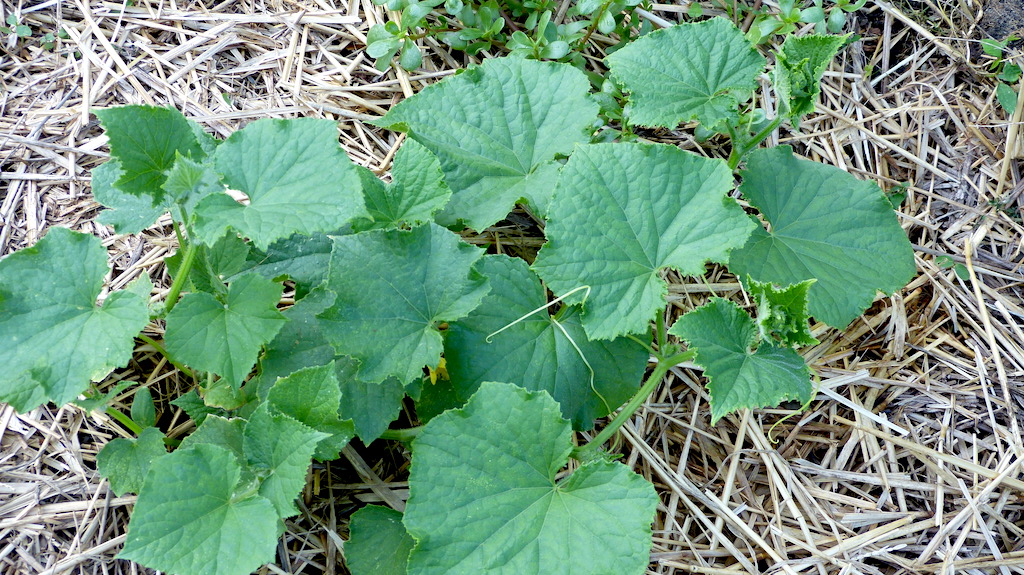 Onions from Seed and Potatoes

Subscribers have already seen pictures of the onions from seed in one of the private letters I sent out with tips on how to mulch them.

It’s a bit early to harvest potatoes but a couple of weeks ago I got enough for my simple dill-potato salad. Just couldn’t resist. 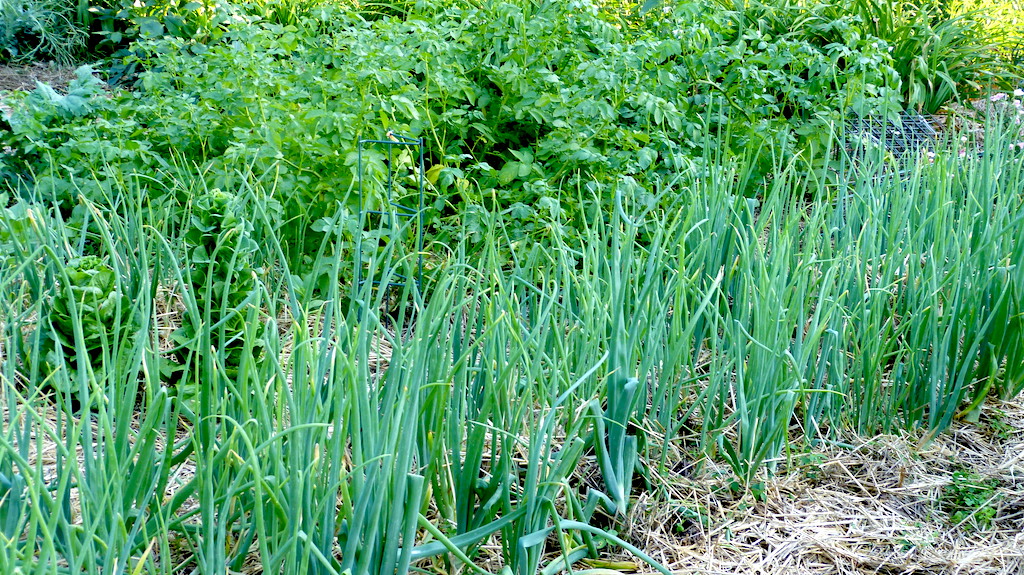 Potatoes in the background, onions from seed, kale (far left upper corner) and two volunteer lettuces behind the onions on the left hand side of the picture that I will allow to seed.

I’m surprised this plant has one leaf.  There for a while I was harvesting its leaves daily picking it bare over a 10 day period.  It’s recovered nicely. 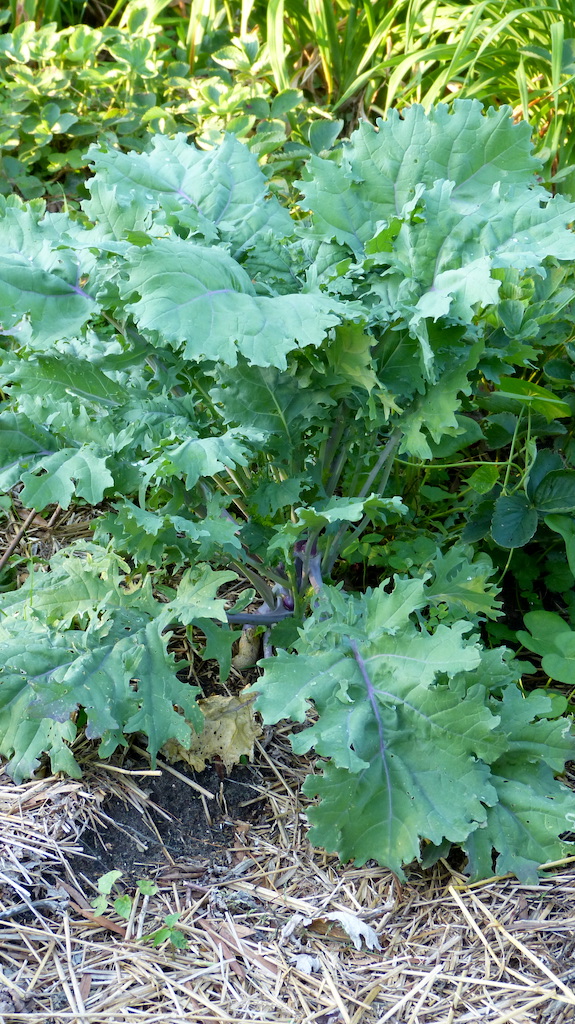 As usual, peppers are still small. When conditions are right they’ll quickly grow to 3 1/2 to 6 feet depending on variety.

My saved seed from peppers outperforms purchased seed by far.   Purchased Carmen seed  (the only hybrid I grow) and only ONE seed germinated!!

I saved seed from Corno di’Toro last year and every seed I planted (about 20) germinated.

I’ve noticed this for at least a decade on almost all crops I grow: peas, tomatoes, peppers, onions, lettuce, etc.  Save seed whenever you can. 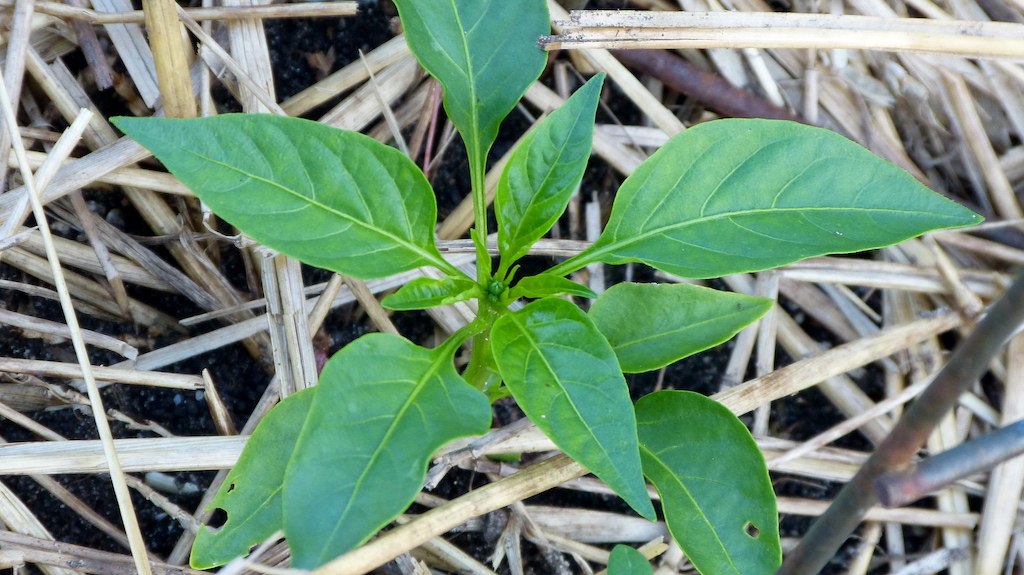 At last tomatoes are starting to bush out. This one is at the lower end of the garden outside the fence and has some supports in already.  Staking the others is overdue. Hope to get to them this weekend. 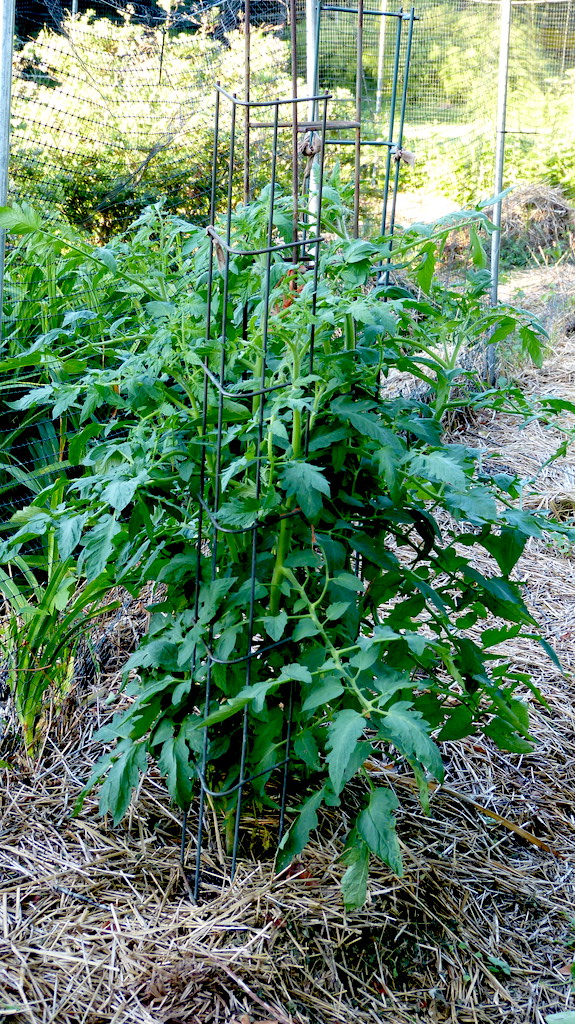 tomato outside garden at lower end

Approaching my Garden Looking to the Right

Only one large roll of straw remains.  I’ve moved 3 this year already. I use a large piece of plastic to move straw.  I’m not steady enough to use the wheelbarrow, but can move more with the plastic anyway.

Middle top of the picture is my cold compost pile. A permanent fixture there.

The tomato shown in the picture above is in this picture too, but hard to see.  Look for the two poles (like white lines) at the top left above the fuchsia flowers. That tomato shows between those poles, but is on the outside of the garden. 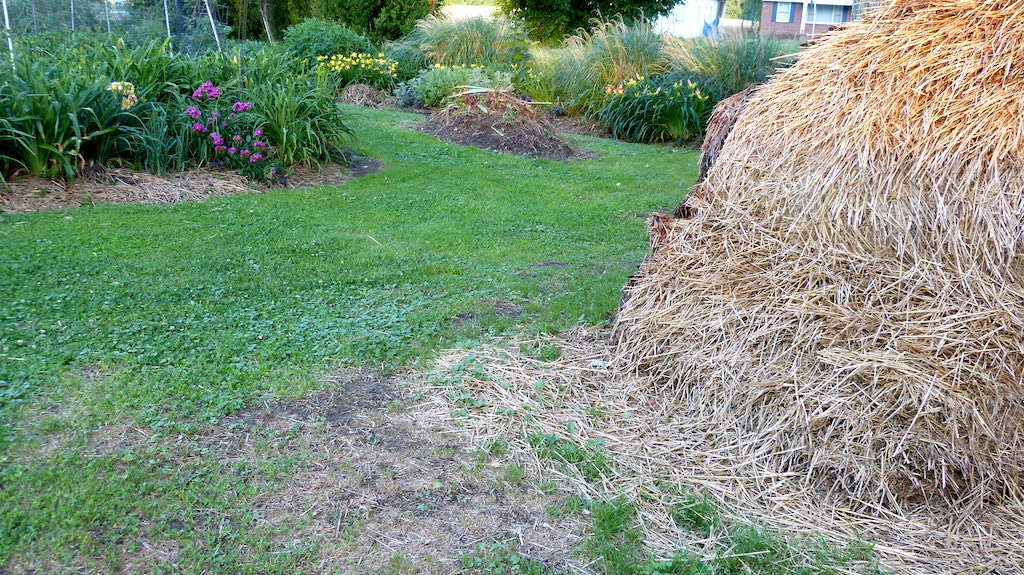 Left to right: border in front of lower end of garden; cold compost pile; border on edge of property; roll of straw.

Other Crops not Shown

Herbs and medicinals and other wild plants are not shown in this post.

Asparagus are finished and growing ferns.

Green bean plants about 12 inches tall. (I plant about a dozen in various spots and stagger plantings.)

Garlic is about ready to harvest.

Figs are in abundance this year.  Not ripe yet.

Carrots  planted in April are doing great. Will plant more soon.  Hope to give them their own post when they get to maturity.

Wishing you a great and abundant season!