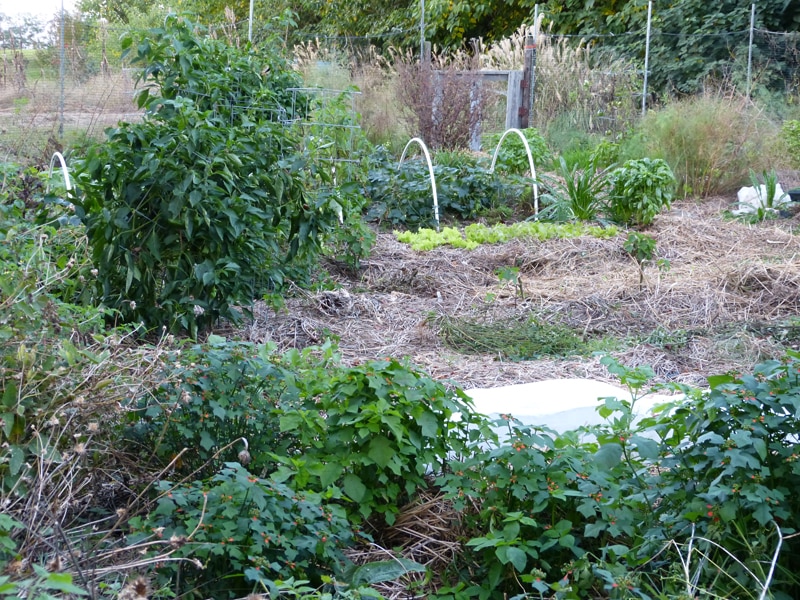 Entering my garden and looking left towards the upper end.

The garden this time of year has it’s own beauty.  I especially enjoy feeling the warmth that’s still in soil even though the air is cooler. 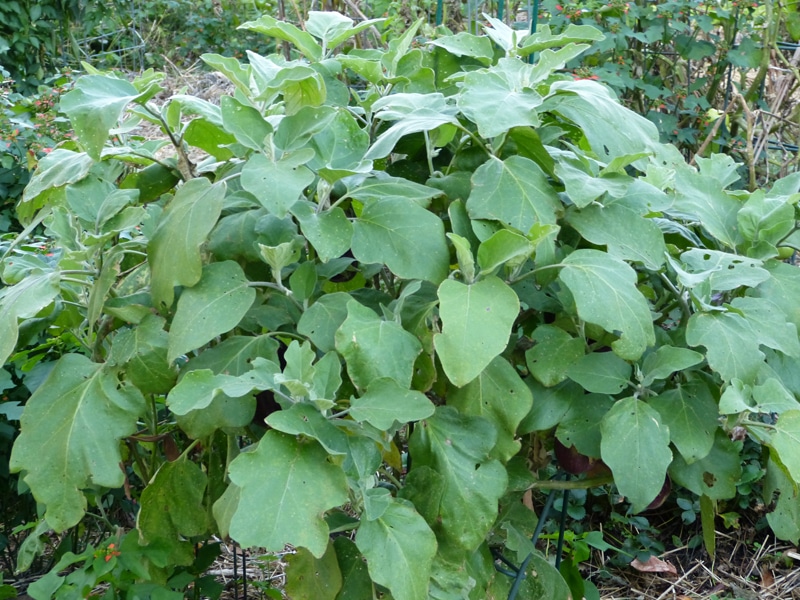 Eggplant. About 8 remain on the plants.  Most are hidden by the foliage but you can still see at least 5 if you look closely.

Eggplants sit in my garden without growing until conditions suit them.  Then about August, when you’d think that what was going to grow should already be grown, they “zoom” grow.  Next thing I know, these tiny plants have turned to giants with all kinds of eggplants growing at what seems like lightening speed. 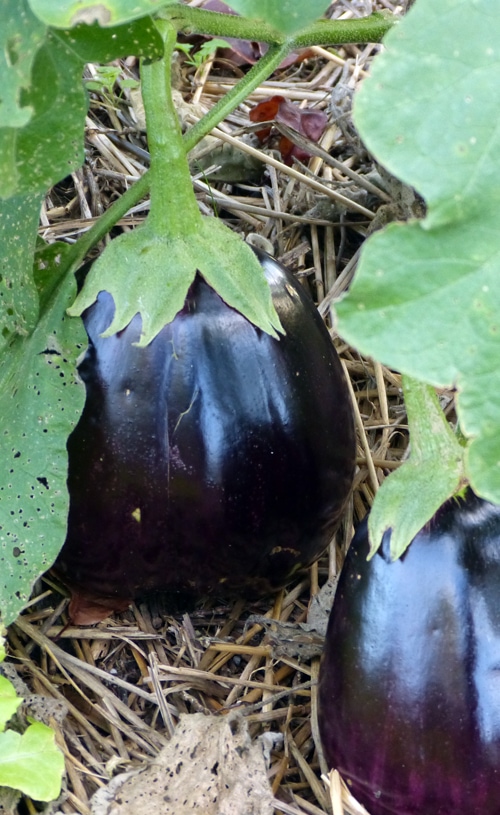 The Black Beauty Eggplants have been especially beautiful this year. 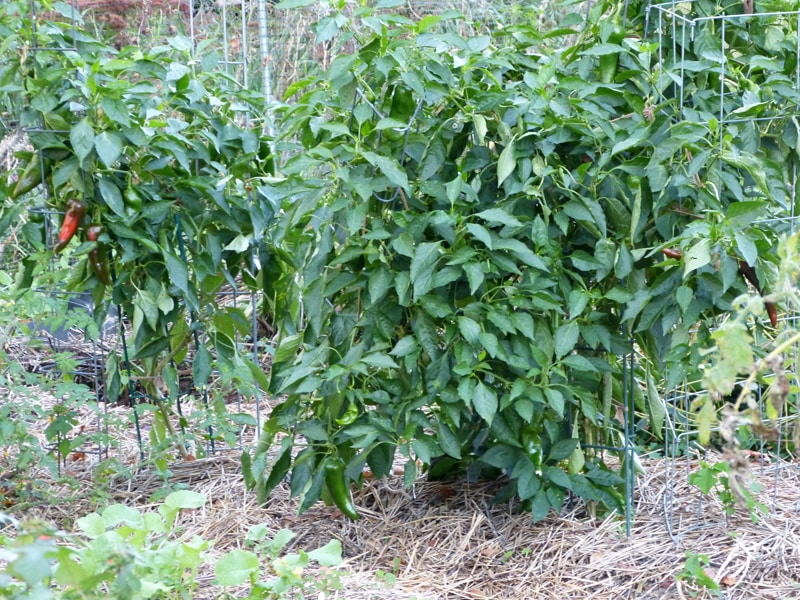 These peppers (Carmen – my only hybrid) are giving me the most red peppers of any I have, so these are the ones I covered when frost was expected the 18th.

I eat about 3 raw peppers a day and I’ve been eating that many at least since the first of August.  Most of them are from the peppers in the picture above.  That’s at least 290 peppers with lots more on the plants.  I just harvested two dozen red ones that are in a basket in my veggie storage area in the house. 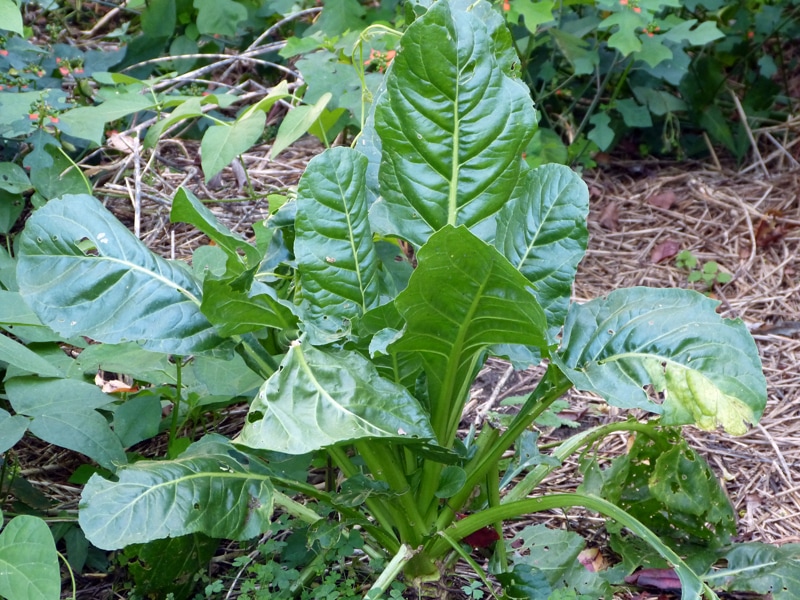 I have only 3 nice pieces of chard like this one.  I picked them all the other night for dinner and it was the best I ever tasted.  Hopefully, it has time to replenish itself for another meal before Thanksgiving. 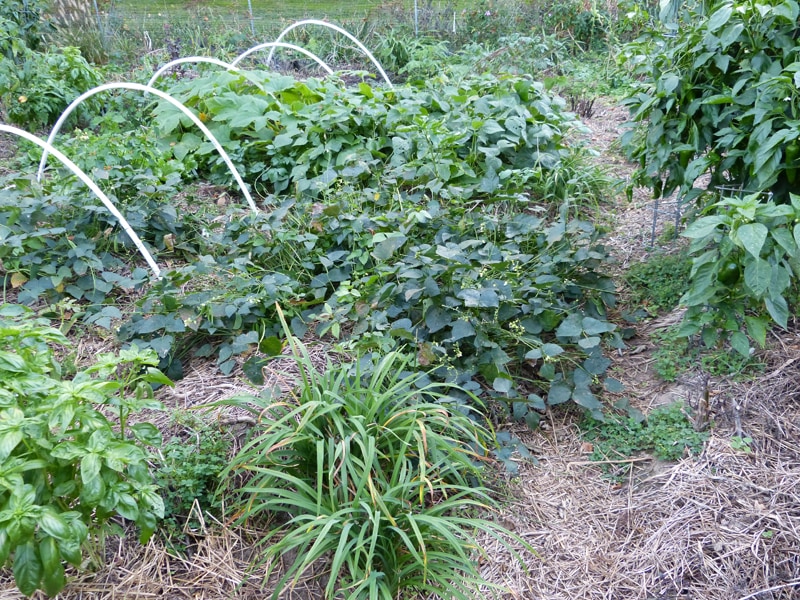 Basil, lima beans, snap beans, yellow squash, peppers, a few potatoes, and even some ginger that doesn’t show too well in this picture.

As we approach the end of October this spot is giving me lots of food to eat and preserve for winter.

The snap beans I’ve been harvesting for at least two months.

I have three more patches of lima beans about the size of this one.  Fresh eating has been very enjoyable and I have at least a gallon in the freezer for winter. 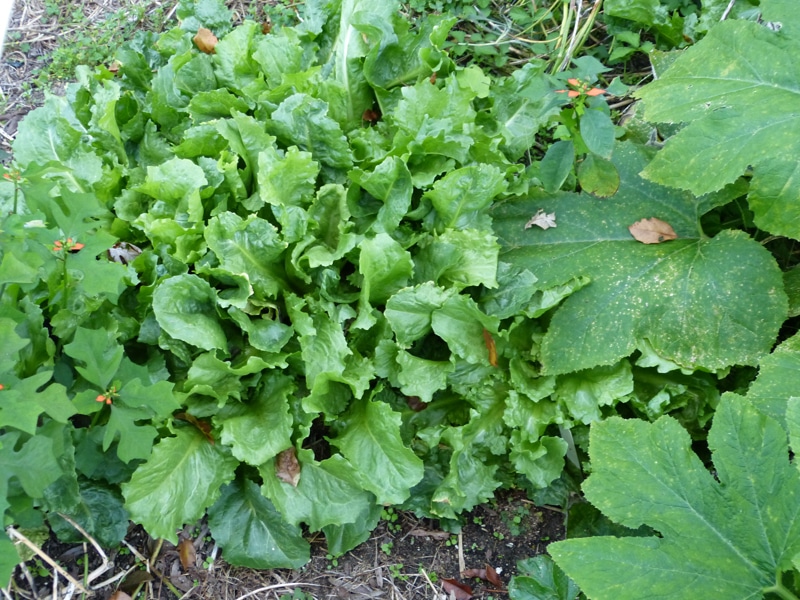 Escarole lettuce that reseeded itself from last years.  I’ve picked it to death, so it may look a bit roughed up, but it keeps replenishing itself.

I love having escarole reseed in my garden.  It’s a great backup when I’m low on my tender lettuces. If you cut it into thin shreds it’s a bit more tender (or easy to chew). 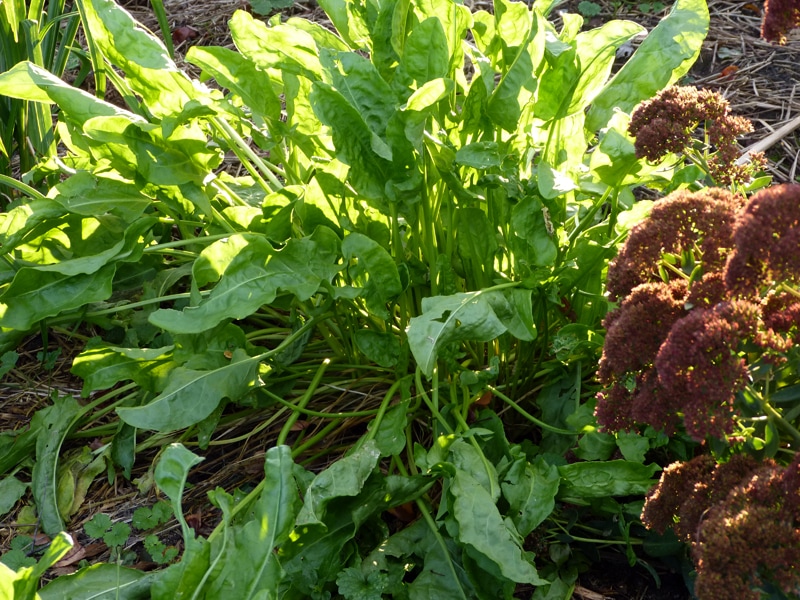 This sorrell was planted last year and it wintered over.  It stalked and set seed this summer, which I cut back after a while.  Numerous plants are throughout the garden.

Used with other salad greens its lemony flavor is not as pronounced as when you eat it by itself. 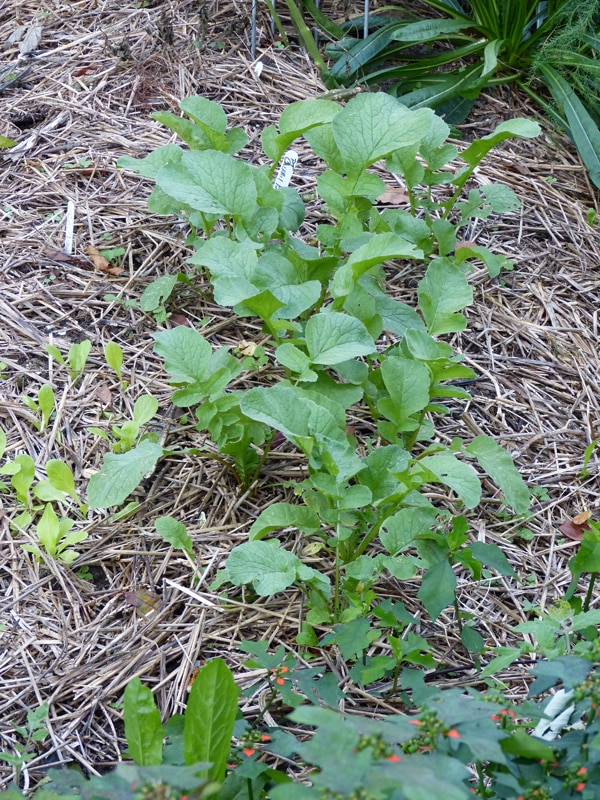 A few radishes in various spots. Some lettuce seedlings.  The green in the upper right corner is cultivated dandelion which is a bit too bitter for my taste.  But I let it reseed in the garden because of the blue “chickory-like blooms and for the sake of diversity.

I planted 3 varieties of radish this fall.

When I first started gardening Cherry Belle was the only one I knew about.  After growing it this fall, the first time in many years, I feel I wasted my space.  It’s no where near as good as French Breakfast and German Giant.

German Giant is particularly long lasting.  You can let it get big, and still have a delicious radish. 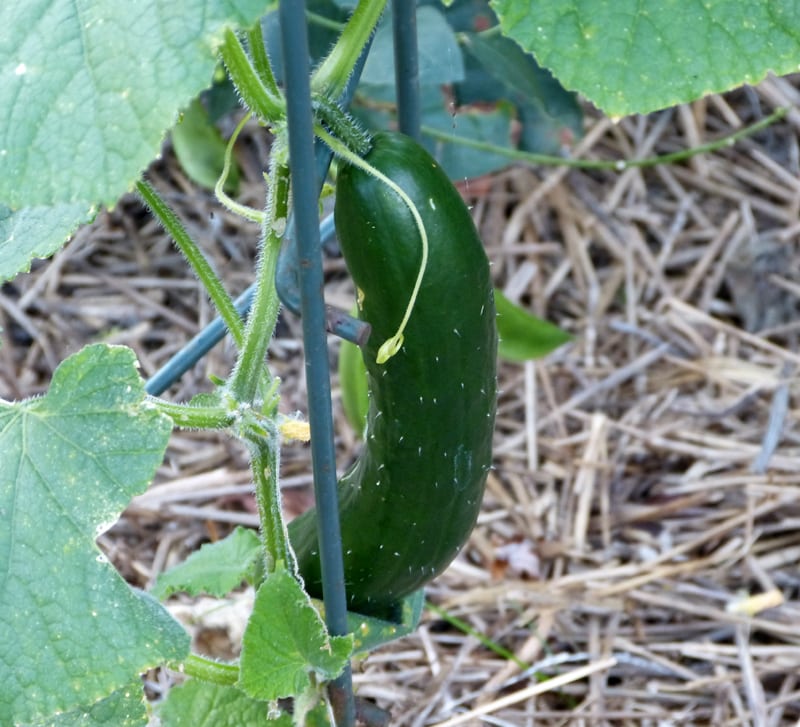 Summer Dance Cucumber.  I picked this one October 17th, but since frost didn’t touch the garden, I still have another one that just might have time to grow this large before another frost.

I’ve never had cucumbers in the garden past September.  This is a definite first.  The vine is nothing like the lush vines of summer, but I sure am not complaining this late in the season.

And by the way, if you love cucumbers but have trouble digesting them, try Summer Dance.  It’s a nice one. 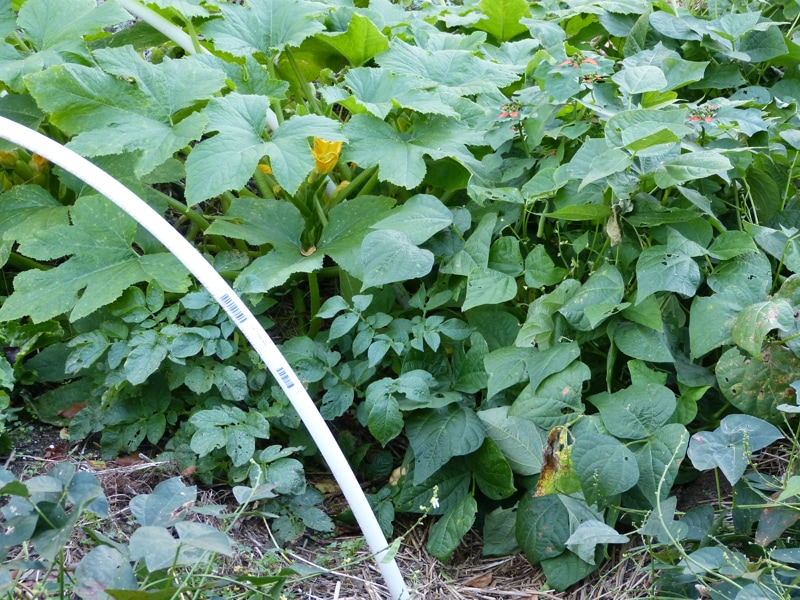 Potato. Henderson lima beans, some of the green beans, and yellow squash.

The night prior to the expected frost I harvested 12 yellow squash; 4 good sized ones and 8 smaller ones.  Frost didn’t touch my garden that night and I sure would have liked to have had those baby squash back on the plant.  Depending on the weather, it might made more.

I picked two small zucchini before the expected frost.  Could hardly believe my eyes today when I noticed two more had formed. 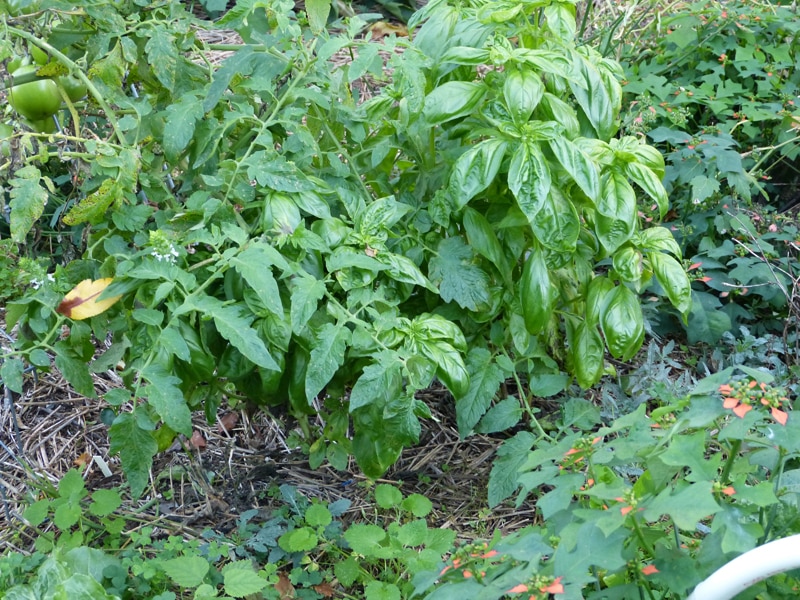 Basil was all over the garden this year.  As you know if you grow basil, it will go to seed very quickly unless you cut it back to prevent that.  I cut mine three times with the hedge shears this season so I’d have basil with my eggplant, which is always late in the season for me. 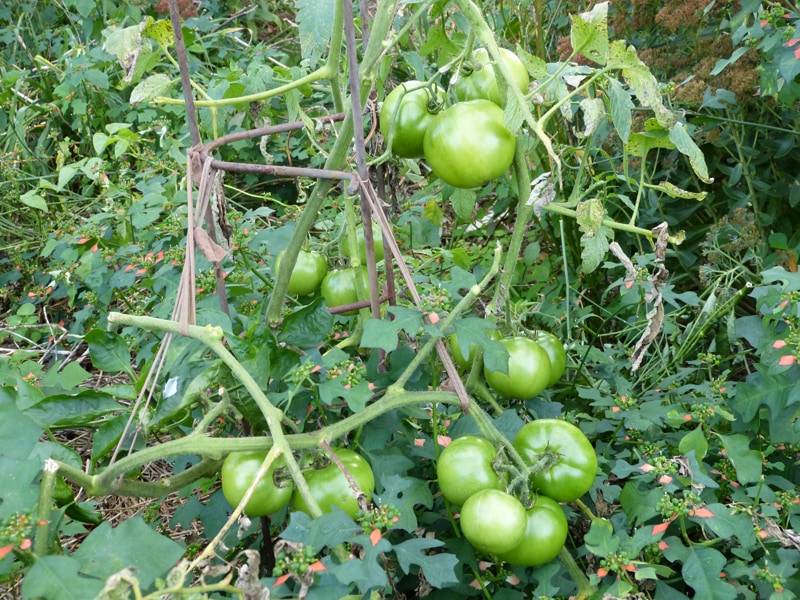 Great looking tomatoes and they’ve been delicious. But the vines are almost bear now. I don’t ever remember tomatoes looking like this in my garden, even this late in the season.

The Big Beefs (the open pollinated one, NOT the hybrid) are the only regular tomatoes remaining.  Ate the last Mortgage Lifter and Cherokee Purple last week.

Matt’s Wild Cherry is still going like crazy.  Bill loved to snack on those when he walked around. 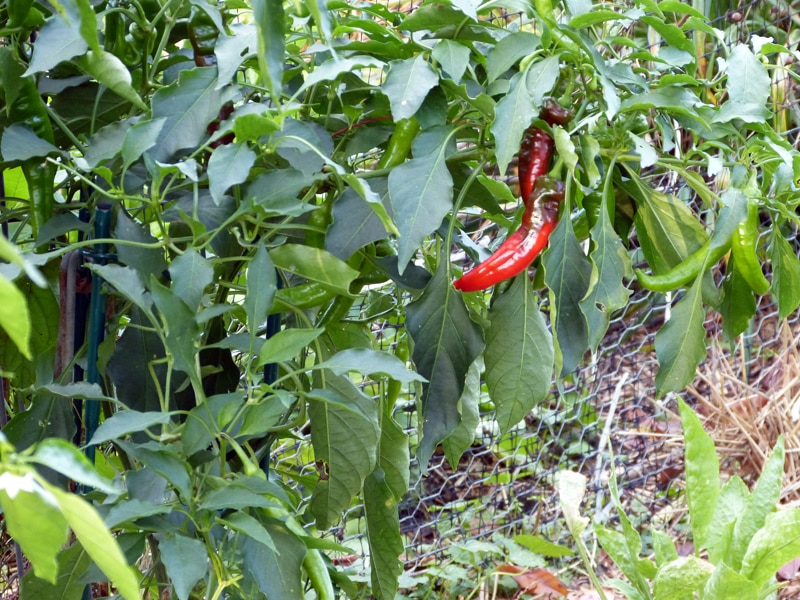 Jimmy Nardello is a lovely pepper and a good looking plant, but I found it lacking it taste.  Sauteing helped the taste some, but I probably won’t grow it again since I eat most of my peppers raw. 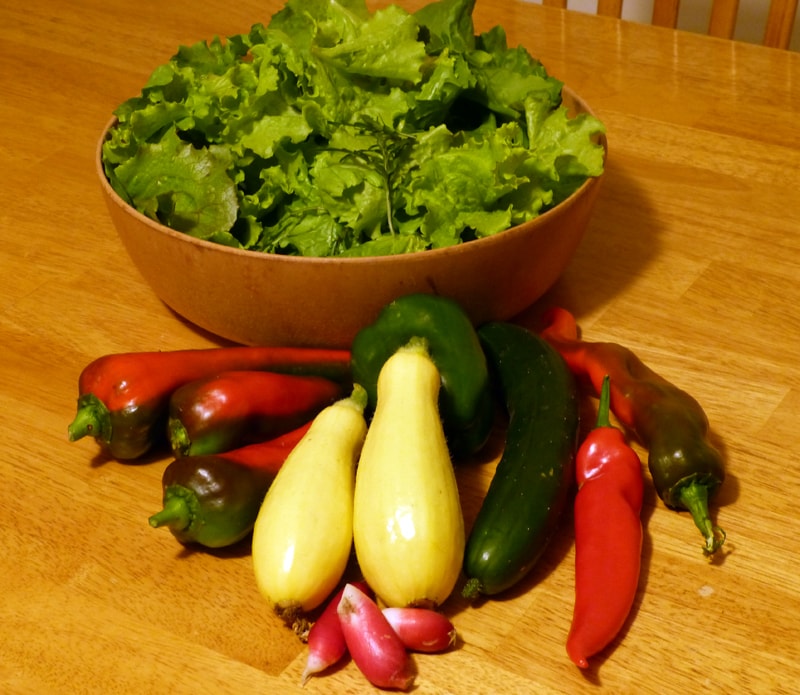 A quick harvest for dinner and lunch the next day.

Arugula is another back-up green that I always have in the garden.

Will harvest ginger soon. Can hardly wait to see how it fared.

Started brussells sprouts several times, but only about 4 seedlings made it to garden.  Some bug really enjoyed them. Two seedlings remain in the garden, but I assure you I’m not getting  brussels sprouts this fall.  As small as the plants are I’m leaving them just to see for myself if they succumb to the cold.  They probably will but I’m going to leave them nonetheless.

A few beets in various places.

Mache is coming up, I think.  (When it first germinates it can look like weeds.)

The potatoes have been delicious this year.  Yukon gold, Kennebec, Rose Gold, and Buttes have been our favorites.  Norland and/or Chieftans (red potatoes) are always good to have on hand because they come in so early.

I didn’t plant butternut squash, but ended up with 6 nice squash from a volunteer that was hidden away.

I’ve come up with a way that will enable me to do the work necessary to cover my winter crops.  I’ll show pictures and talk about that in the future.

Let me know how your fall garden is doing.  I’m always thinking of you when I’m out there in mine.