I recently received an email from a new reader in New England (Western Massachusetts) who was having trouble with flea beetles destroying her brassicas (cabbage, broccoli, kale, etc.) and requested that I post something about them.

There are various species of flea beetles. Most species have a certain plant or crop that it prefers. There is at least one species that feeds on several crops like squash, beans, lettuce, and corn as well as sunflowers and many weeds.

The Cabbage flea beetle feeds on mainly cabbage family plants, so I assume that species is the one giving the reader from New England trouble.

What Quick-Fix to use?

Trying to find out as much as she could to stop the flea beetle picnic going on in her garden, my new reader asked various folks what to do.

Is Diatomaceous Earth the Answer?

(And by the way, even the food grade diatomaceous earth that is recommended for garden use is harmful to humans if inhaled. So be careful not to inhale the dust.)

A Reason Not to Use It

The reason  I don’t use diatomaceous earth in my garden is because it also kills beneficial insects. Those are the guys who help me destroy the pests. I want to keep as many of those in my garden as possible and don’t want to use anything that will kill them.

Many times row covers are recommended to keep flea beetles out.

Seems like a great idea if you know the larvae are not in the soil being covered.

If they’re there, they’ll emerge as adults and start feeding on what you have under the cover.

The reasoning behind tilling in the fall is  to uncover the hidden flea beetles. The idea of bare soil is so they’ll have nothing to eat. These suggestions are sorta like throwing the baby out with the bath water.

Tilling destroys a lot of the great soil life you need to help you be successful.

Bare soil is totally against nature’s way. Left uncovered the soil easily compacts when it rains. And organic matter that is so important oxidizes and disappears quickly when soil is bare.

Another 2 Suggestions that Sometimes Work Well and Sometimes Don’t

Neem oil, often recommended to control flea beetles, is systemic. In other words it enters and passes through all the tissues of the plant. (One reader wrote to me and said she stopped using it because she could taste it when she ate the cabbage she’d sprayed with it.)

Also, neem oil can smother and kill beneficial insects and they’re your army in the pest control war. In order to avoid that, care has to be taken to spray very early morning or late evening so the spray can dry before good insects become active.  I prefer not to chance it.

Unlike my reader who has actually seen the flea beetles feasting on her plants, I’ve never seen the beetles feeding — just their damage. But if you have the kind that can be seen and stay on the plant long enough for you to get a bit close, you can use a small vacuum like a dirt devil to “clean up” your plants. (Sorry — couldn’t resist that.)

I’ve had several readers write to me about vacuuming up squash bugs and harlequin bugs.  They’ve been delighted with the results. (It might take a bit of practice to become proficient enough to vacuum up just the bugs rather than the leaves of the plant.)

Remember to empty your vacuum.  Hold the neck of the bag closed when removing it.  Either tie off the end (so the bugs can’t get out) or place in a bag you can seal and dispose of.

Beneficial Nematodes – One of the Best Solutions IF —

I’ve used beneficial nematodes and they’re great and they work. (At the time, I was not targeting flea beetles but “bad guy” larvae in general.)

But in order for them to do the job you have to do a bit of planning and have the necessary information on the target pest.

There are several types of beneficial nematodes. Make sure that the flea beetle is a target pest for the one you order. The information in the catalog (hard copy or online) should list the target insects.

Before you order any nematodes, research a bit so you’ll know the life cycle of the flea beetle (or any target pest). After that do some figuring about when the second generation (etc.) of wormlike larvae might be in your soil dining on roots. Otherwise you’re wasting your money since the nematodes can’t destroy something that’s not there.

Don’t count on long term presence of the nematodes.  They remain alive while they have food and moisture, but conditions can change quickly.

Still got flea beetles on my eggplants, but tried a homespun remedy – which WORKED.

When leaves are wet, take a sifter and a couple tablespoons of flour, cornstarch or similar. Lightly dust the surface of the leaves. Flea beetles will become sluggish and stop munching the leaves. Has to be reapplied after it rains, but it does work – and there’s no going out to buy anything special.

Do flea beetles pick on mature plants? (Someone told my New England reader they don’t.)
The correct answer is: they often do.

Here are various examples of what can happen:

As you deal with the immediate infestation of any pest (or disease) and choose your preferred quick-fix, keep in mind the great truth about pest and disease control: most pest infestation and diseases can be avoided (over time) by feeding the soil well and increasing organic matter.  I covered this in greater detail in the post Organic Pest Control/ Disease Management/ Working on the Cause Rather than the Symptom. I urge you to read it, especially if this truth is new to you.

Although you don’t hear about it a lot, science has proven that plants that are not receiving what they need from the soil and/or are under stress send out “vibes” that call in pest insects.  The healthier your soil is, the healthier your plants will be and the less pests you’ll have.

Many will give you advice about adding amendments to solve a problem (pest or disease).

I urge you to add NOTHING (except organic materials) unless you REALLY KNOW that your soil is in need of what they recommend.

If you’re going to have a soil test to find out what is really needed, have one done by a lab that specializes in organic agriculture.  Otherwise, in all probability you won’t get the right advice for doing it nature’s way.

If you want to take the easy way as I’ve done,  ignore all the folks who sell amendments and just continue to add organic materials to your soil.  The more diverse, the better. Nature will work it out perfectly. And you’ll have less pest problems with each passing year.

My garden is one of the proofs it works. 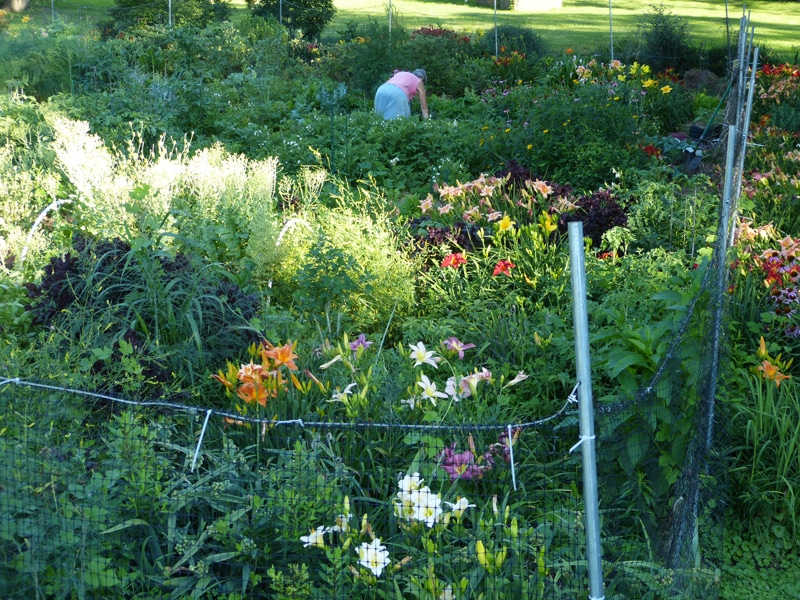 My friend stood on a ladder to take this picture of me in my garden on June 30th.  Fenced area is approximately 40′ x 60′ . (The sun struck area is lettuce going to seed.)

Soil Test – The Pros and Cons

Bugs and/or Diseases in Your Organic Garden Got You Down?

Defense Against Garden Pest and Disease

Hornworms – Why you might Need a few in Your Garden