At our house eating fresh tomatoes everyday ended sometime after the first week in January. At that point I had about a dozen nice looking tomatoes left, but they were not ripening.  I started to throw them out (I don’t care for fried green tomatoes), but decided to keep them and see what they would do.

I had to throw away six.  The other six still look pretty good.  One felt and looked perfect for slicing. So, we had it for lunch today along with one of the 6 onions I have left.

Ok — I realize it doesn’t  look quite as good as the ones picked at the same time and served in December, and certainly it doesn’t look as beautiful as one picked off the vine in July, but cut me some slack here — it IS February and I couldn’t resist sharing it with you. 8) 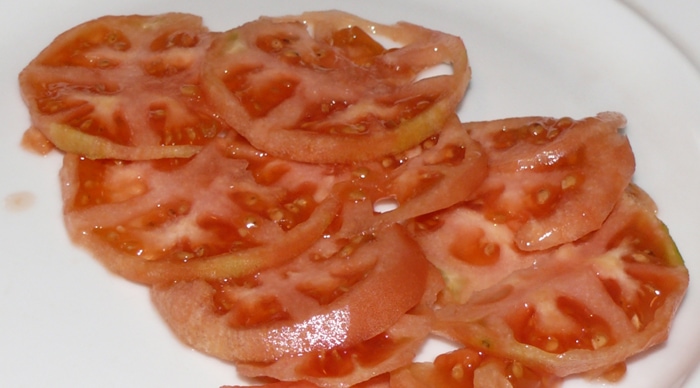 Tomato picked in November and sliced for lunch February 12th.

I can hardly wait for the up and quickly-coming tomato season!

My tomato goals always include

I’ve adjusted the third goal to: freeze more of the fabulous tomato sauce made from roasted tomatoes, rather than tomatoe essence which had been my preference for years.

The idea is to bake the tomatoes in the oven for about 3 hours until shriveled and dry, but with a little juice left inside. Then eat them  — or add to pasta, or cover with olive oil and save ’till later.  Variations are in roasting time, oven temperatures, and whether or not you add olive oil and spices like minced garlic.

In one review I read of a lady who picked fresh tomatoes out of her salad —– but absolutely adored roasted tomatoes.  She had to make a lot because she would eat so many right off the “cookie-sheet” before she ever got to serve them.

Without exception – all reviews said that roasting tomatoes absolutely transforms any tomato into something “heavenly.”

Everyone seems to agree the best tomatoes to use for this purpose are Roma (often called paste) tomatoes.  I’ve never been a big fan of Roma tomatoes, but then I’ve never eaten them roasted.

The two varieties highly recommended are:

This is an heirloom from Poland and is said to be one of the best paste tomatoes on the market.  They hold well on the vine and have very few seeds.  (The very-few-seeds part is probably part of the reason they are good for roasting with snacking in mind.  And course, paste tomatoes have less juice.)

This one’s a hybrid.  It’s a small 2 oz red pear shaped tomato with excellent flavor.  They are said to have an extra long shelf life which really appeals to me.  If I start them late I can probably have a good picking about the time frost is expected.  Then —- roast them through the fall.

In all the years I’ve grown tomatoes I’ve always grown indeterminates that produce continually until frost.  Window Box Roma is a determinate. So all the fruit will ripen within a short period of time.  But — as much as I don’t like that thought — I just have to try them.

If you’re a tomato lover (and maybe even if you’re not) you might feel the same.