This fall weather has been wonderful for working in the garden. The air today was moist and smelled of the ocean.  Sure brought back memories of 50 years ago when Bill and I were first married and worked at the beach one summer.

Had the farmer deliver two big rolls of straw today.

If I can protect my tomatoes from the early frost that I know is coming, I should have lots of green tomatoes to pick before the freeze. If so, I’ll have fresh tomatoes into January.

Still have more tomato seeds to save.

Not sure I have enough row cover fabric to protect all the tomatoes, peppers, squash, limas and green beans! But I’ll cover what I can. I want to get the fresh stuff as long as possible.

The picture below shows today’s harvest, some alfalfa sprouts (for eating) and some tomato seed I’m fermenting. 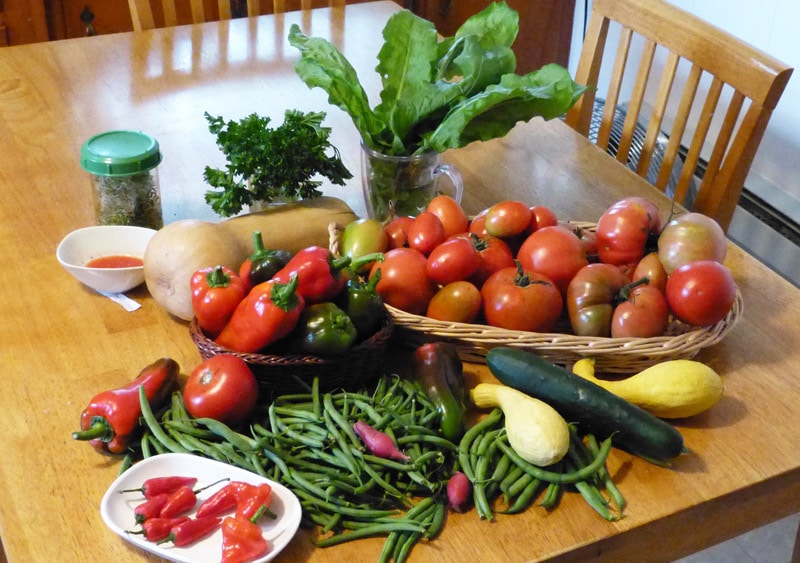 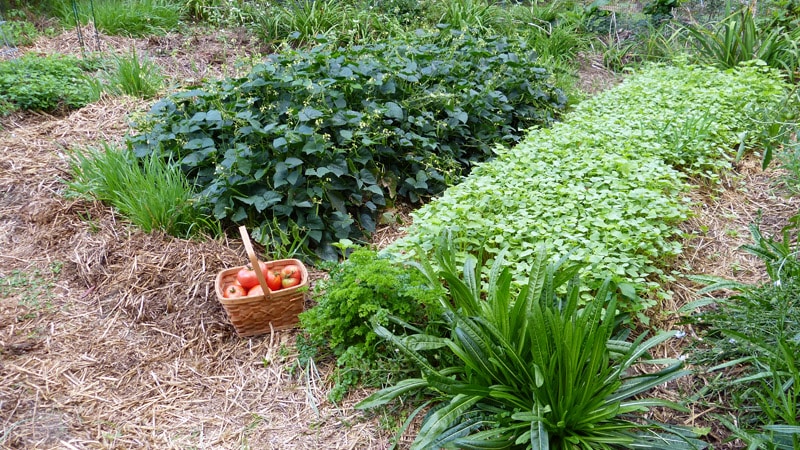 I’ve determined that it’s the crickets that were eating my seedlings. I kept planting and the seedlings kept disappearing. In this last week – finally – something is growing! They ate most of my beets, spinach, carrots and lettuce.

Peppers didn’t even start growing until mid July, but are outdoing themselves now.

Tomatoes have been great. Should have plenty of tomato sauce to last through July of next year. 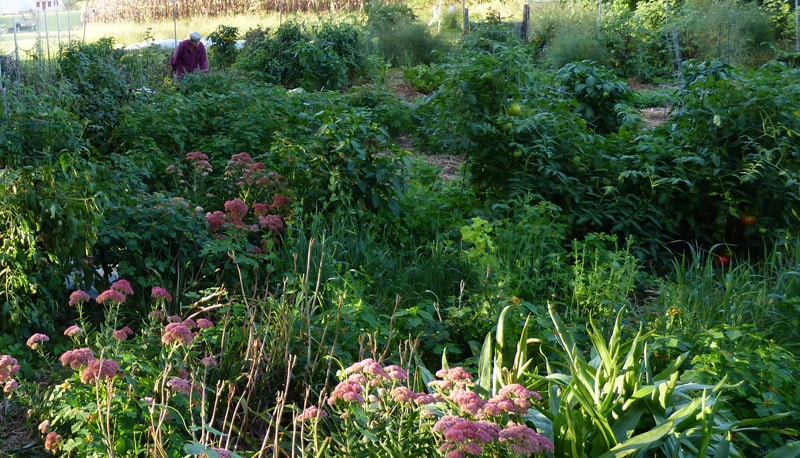 Squash bugs have been manageable for the first time I remember in many years.
Harlequin bugs have been a pain.
During the summer, saw and killed at least 1 or 2 stink bugs a day.
Asparagus beetles were worse than usual.
Had a couple weeks that potato beetles were bad. Other than that, there were very few.
Saw three large tomato worms with the tachnid fly cocoons on them on the tomatoes in the back meadow. 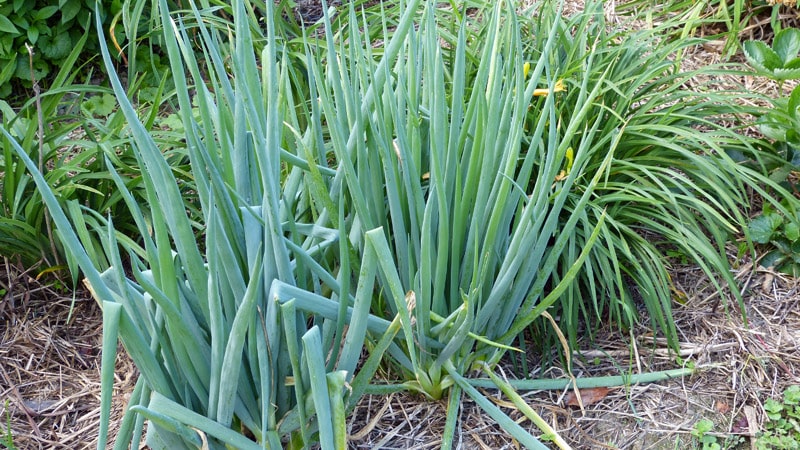 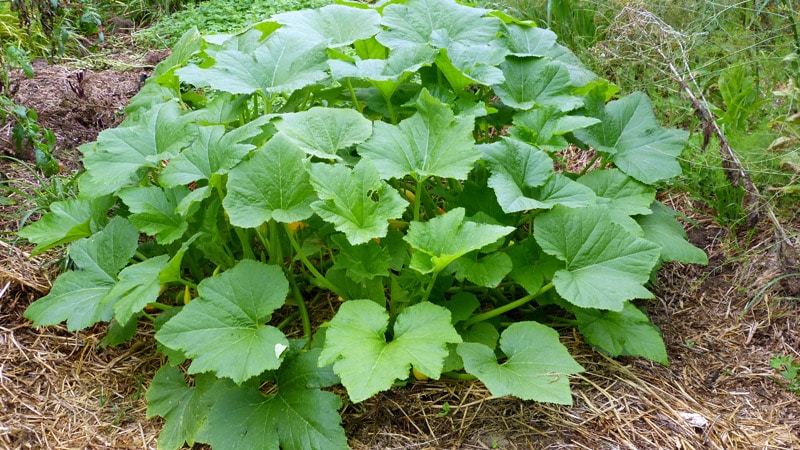 Having yellow squash without having to constantly fight the squash bug and the squash vine borer is wonderful!  I had almost forgotten what it felt like.

Potatoes were great. Still have some in the ground.
Harvested about two dozen butternut squash. Not all matured, so the small ones I used right away.

Cucumbers were wonderful as always.

I’ll have onions (harvested in June and July) through this month. I usually have onions through December.
Fall radishes have been slow to produce the root, but seem to finally be coming.

Plenty of strawberries, blueberries, and raspberries in the freezer.

Have some chard from last year still in the garden.

As soon as I can see what new seedlings are going to grow (in spite of the crickets), I can put my hoop tunnels up. 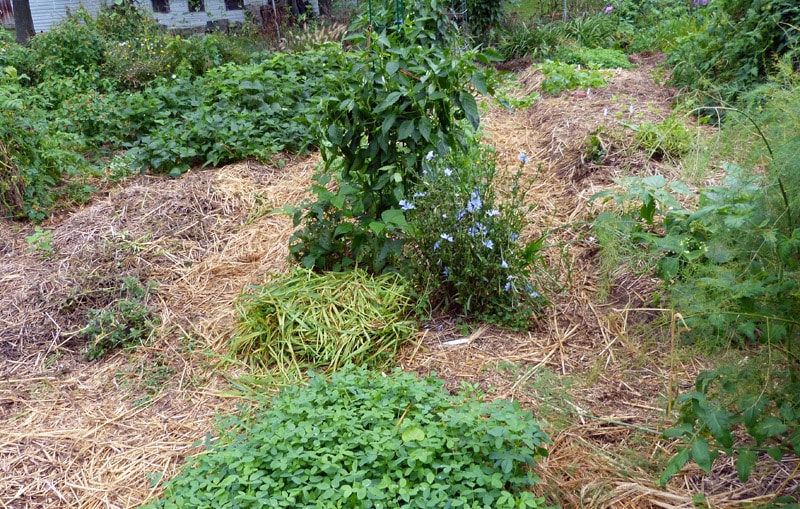 The bare spot on the left is where I’ve just cut the old snap beans.  At the far end of the row are newer beans now producing.  Also the row to the far left has beans.  Pepper plant in the middle.  Alfalfa at lower middle.  Blue bloom is cultivated dandelion. Radishes are top middle right.  Also tomatoes, asparagus ferns and more beans on right hand side. 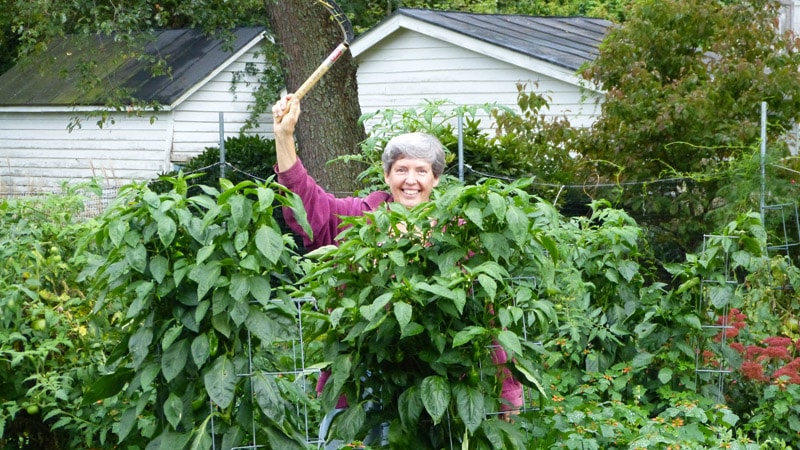 These two peppers are close to the garden entrance. I’ve just come into the garden with my hand sickle to cut some oats.

I’m also working about 30 minutes a day on cleaning up some of the back border that I didn’t finish last fall because the ground stayed frozen much longer that usual. 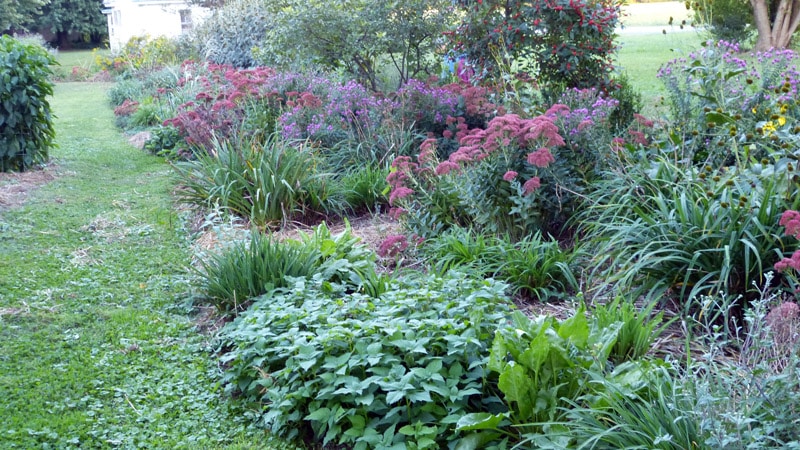 Side flower border on property line across from the lower end of my garden. Top left is a pepper plant right next to the garden fence. It’s almost 6 feet tall and is giving me great peppers and lots of them. I’m working behind the Ilex trees.  (Look for my blue top.)

There is nothing like eating from the garden.  We started on just “garden food” when the asparagus and strawberries came in and we won’t stop until the garden stops producing.

What’s going on in your garden?