I was shocked to come round the shed on my way to the garden one day last summer to find that a huge limb had fallen.

It was not without tears that I started the clean up. I have to admit I felt a bit sorry for myself, as it was a task that I never would’ve had to do by myself if Bill were still alive. Had he been here, I would have cut the small limbs to help him and he would’ve done all the “heavy” work.

Many old saws hung in the shed, but at the time I didn’t know one from another. I hauled them out and tried them all. None of them made it easy, but I had to find way. I decided that every day before I did anything else I’d cut some on a large limb at least 30 minutes. (That would get me about 1/3 of the way through a 4 inch limb.)

The more I worked on those big limbs, all I could think about was another big tree that seemed to be destined to fall on my garden fence when a future northeaster came. That would cause an even bigger problem for me since I wouldn’t know how to fix the fence. (I know it must sound like I don’t know how to do anything.)

Bill and I had talked about having the threatening part of that tree removed. Shortly after that, he was too sick for me to think about anything but taking care of him.

After Bill died my resources were close to nil. I wasn’t sure if I’d have enough to have the work done. The tree folks we had had come every 5 years or so, were/are excellent. But their price for the one tree was beyond my reach.

I called a couple of others. Couldn’t afford any of them.

The Good, The Bad, and The Ugly.

In desperation I asked the last guy that gave me an estimate, how much to just cut out the part I wanted down and not haul it away. I had just enough funds.

Five men came. What a mess they made.

They left me with an enormous pile of big tree trunks that was over 10 feet tall and more than 20 feet across. That was in addition to their unearthing the plants in the side border and ruining a section of ground that use to be level.

When they were gone I was overwhelmed. I went inside, laid down for 4 hours, and cried. I hate to admit that I was so wimpy, but I was.

Feeling sorry for myself wasn’t helping very much, so I got over that.

With a nice pair of lopers (that I already had) and several saws that would’ve had a hard time cutting through an apple, I finally got the job done.  It took almost a month to get everything cut down and stacked.

When a young friend showed up unexpectedly and offered to haul it away – had it been physically possible for me – I would’ve jumped up and clicked my heels together. 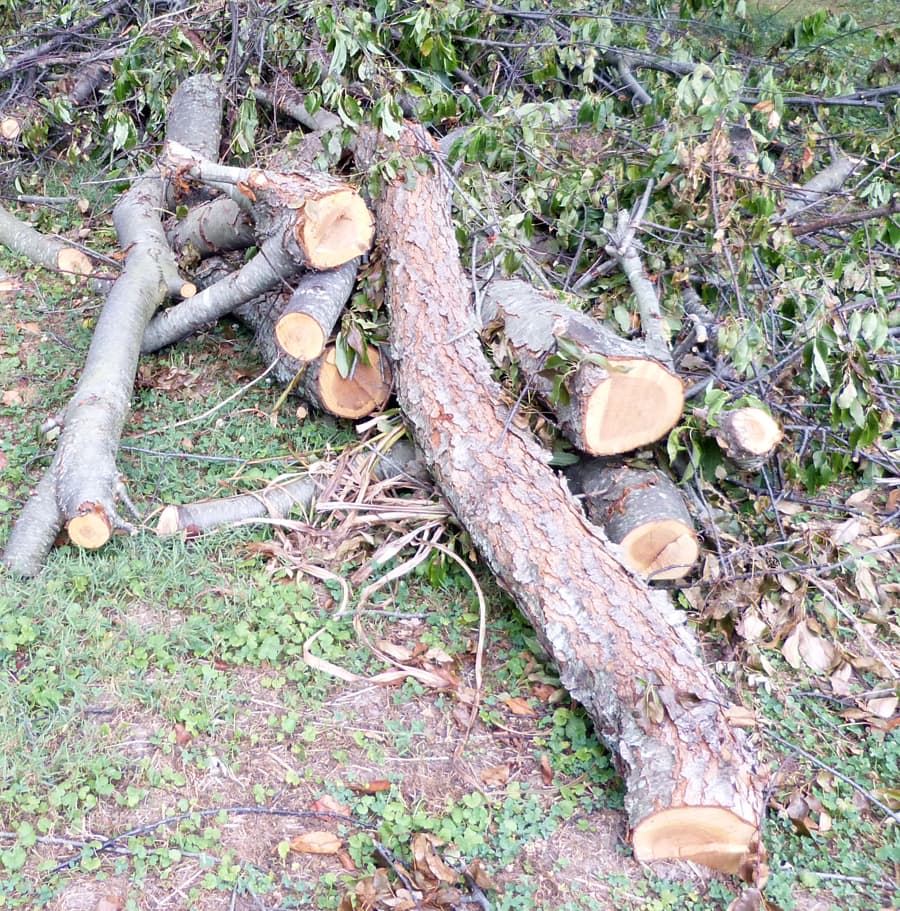 I wish I had pictures of the pile before I started clean up, but I don’t. These are a few of the tree limbs as I got to the bottom of the 10 foot x 25 foot pile.

We’ve had a lot of hard wind lately.  And yep, you guessed it.  A tree came down.

The 35 foot tree that was on a neighbor’s property fell onto my property. (These folks are ones who own the lot with the invasive monster trees that I’ve mentioned in prior posts.)  Since they don’t tend to anything, I knew I’d have to move the tree myself.

The first thing I determined was to do some research on a saw that would allow me to do the job much more easily.

Although I did several hours of research, it really only took about 30 minutes of looking around to learn that the Silky Pocketboy Folding Saw made in Japan was probably THE best there is.  Not that others aren’t good, but even the videos made by people who have every type saw available – say that Silky – for one reason or the other – comes out a notch above the rest.

I knew it was what I wanted.  No more lugging around those big old hand saws that don’t cut anyway. 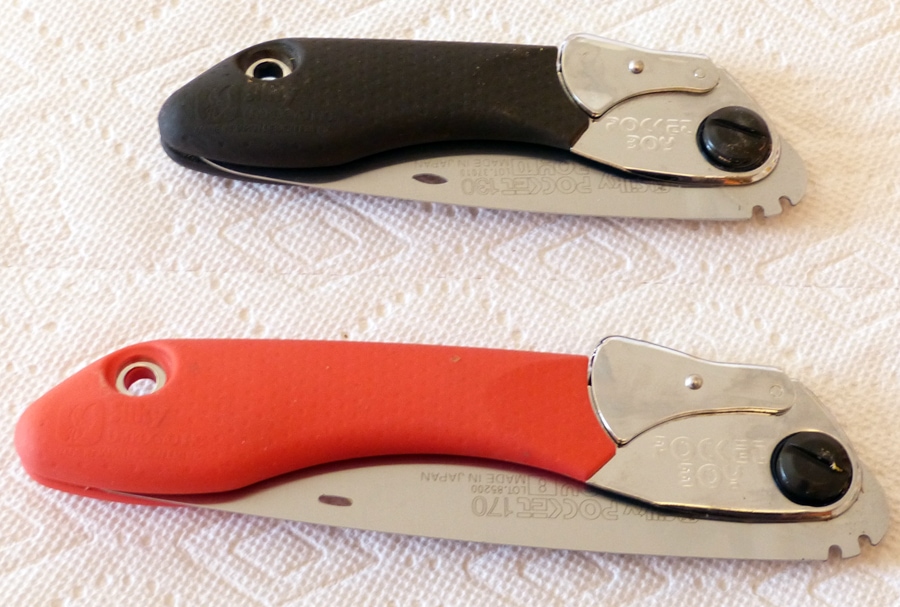 As the name indicates, these little saws can fit in your pocket.  I carry mine in my little garden basket with my gloves and other things I might need. (They come with a nice thick carrying case, but many reviewers found it easier to just carry the saw without the case in their pocket.)

The handles are color coded for the teeth:

I wasn’t sure about the blade I needed so took a guess and ordered the 5 inch blade with medium teeth.

The same day the saw arrived, a friend showed me a saw blade similar to the one I would need to cut those 6 inch diameter logs.  One look and I knew that the 5 inch saw with medium teeth that sails through the 2 1/2 inch (or less) diameter branches, would not be the best to use on the larger logs.  (Would take longer to get the job done on the 6 inch logs.)

I ordered another saw with coarse (large) teeth.  And I decided to try the longer 6 3/4 inch blade. My choice was perfect.  It took me about 10 minutes to cut through the 6 inch thick log. Quite a difference than when I used those older large handsaws last summer.

I’m confident that a stronger person would cut through it much more quickly that I. 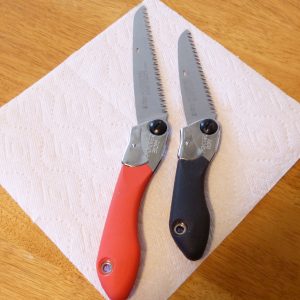 Blades can also be positioned and locked at this angle when need be.

The wood of the fallen tree was totally dry.  Left the blade as clean as brand new!

When cutting up limbs that are “green”, sap builds up on the blade.  If you had lots to cut the sap build up would slow things down and make it harder.  I’m usually finishing up, just about the time that happens.

A brush is good for removing the wood bits from the teeth before you clean the blade.

You can buy a special solvent for cleaning, but I used kerosene (or rubbing alcohol) since that was the solvent(s) on hand.  At first I didn’t think it was working.  By chance I ran water over the blade about 5 minutes later and found that the sap instantly became removable. (Remember – I’m new to all this stuff.)

I wiped the blade clean and then coated it with a drop of honing oil Bill had.  Wiped off the excess; folded it and returned it to its case in my basket.

The teeth on these saws are “impulse-hardened”, a proprietary technology by Silky. This is said to allow the teeth to stay sharper about 3 times longer than non-hardened teeth.

You cannot sharpen impulse hardened teeth. But if your saw ever does become dull, you can buy new blades.   From the reviews I read, it’ll probably be a long time in the future before that happens.

Last summer, even if I had known about these little saws I wouldn’t have been able to get one.  But by going through the situation in the worst of conditions I

Probably sounds absurd to those who can’t relate to this story, but having these little saws in my garden basket has made me feel empowered.

I don’t particularly look forward to still cutting up fallen trees when I’m 80 and 90 years old, but with my two little empowering partners in my basket, it’s possible.