I had the great fun of growing eggplant for the first time this year.  It’s not that I haven’t tried to grow it at various times over my 33 years of gardening, but flea beetles have always eaten the small seedlings before they had a chance to get started.

They’ve seemed to love eggplant even better than radishes which a lot of folks use as a trap crop for flea beetles between their eggplant seedlings.

Eggplant was never one of my “have-to-have” crops like onions, tomatoes, lettuce, potatoes etc.  If the seedlings didn’t make it (which they didn’t) I just moved on with what was necessary and forgot about the eggplant.

A Way to Beat the Flea Beetles

A friend who has also experienced this same problem found a way to beat the flea beetles. This year he potted up a plant or two of eggplant and put the pots out on his deck. (It’s raised about a foot off the ground.)  It did the job.  No flea beetles. He had eggplant on the plants  just about the time he told me what he had done.

Immediately I wanted to try it — but with a slightly differently approach since I don’t have a deck.

Grow Bags – Much better than Pots

I had heard about grow bags.  Grow bags (sometimes called smart bags) are modern versions of a concept that goes back to ancient Egypt and Greece.  In order to be successful you want the really good grow bags made from a two layer special fabric that is breathable and allows for good drainage.  The roots won’t circle like they do in a pot or planter.  They grow all the way to the edge of the grow bag and then are “air pruned”.  When that happens – the roots branch making a more extensive root system.  That’s a key in growing better plants.

Unlike a pot, a good grow bag releases up to 30 degrees more heat than traditional plastic.  Since the container stays cooler the roots can grow in hotter temperatures as well as keeping microorganism life alive and working inside the grow bag.

These good ones are said to last 3 to 5 years. 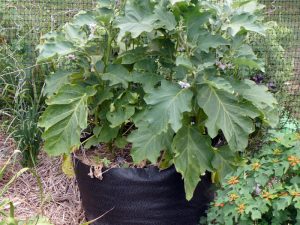 And they come in several sizes.  I got the ones that hold 25 gallons of soil. It’s about 21 inches wide and 15.5 inches tall.

I placed the grow bag in the garden to right of my gate.  Then I filled it with a mix of some decaying straw and soil that I took from the bottom of a “cold” compost pile. Eggplants are heavy feeders and this was the best I could do for them. Then I planted two seedlings in the grow bag that I had previously started in small pots.  Spacing between them in the grow bag was about a foot.

That was in June and they sat there in that grow bag for what seemed like forever before they started to grow.  Finally, they did grow and what fun that was.  The plants got 3 feet tall and when those big pink/purple blossoms came I was excited.  I thought the eggplants would never get bigger than a quarter but I’m happy to report they did. Three big eggplants on one plant and nine medium size eggplants on the other! 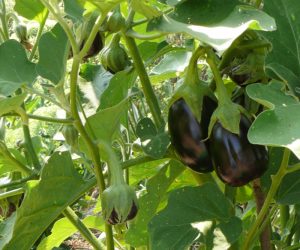 And yes, the flea beetles did find them in the 15.5 inch tall grow bag, but only after the plants got about 3 feet tall. By then they were giants and able to easily withstand the attack. 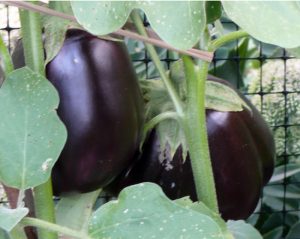 These two are ready to pick.

The plants were so large I had to support each plant with a stake beside it in the grow bag.  Before the hurricane at the end of August I put tall tomato stakes in the ground beside the grow bag so the plants could be supported if the wind blew them over. Then I wrapped them with row cover fabric to give them even more protection.  They made it just fine.

Notes on Watering and Mulching

Like any vegetable — the huge eggplants you get in the store are nothing like the home-growns.  With home-growns you can eat the tender skin and feel good about it.  Also, you can pick them when they’re prime.  You have a broad window of opportunity here since they are good for a long time.  I picked my eggplants when they where about the size of my open hand and nice and shiny. We ate them the same day when the nutrient content was the highest.

I’ve tried several eggplant recipes, but not as many as I plan on trying next year. One of my favorites is a customized version of one you see online a lot.

We have really enjoyed it! 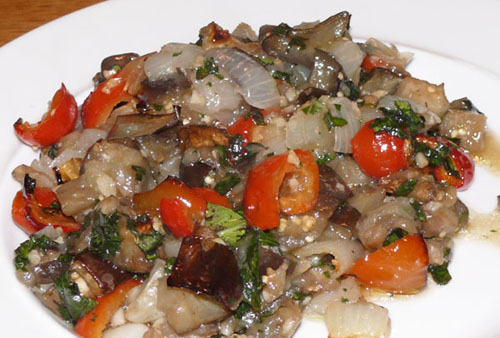 When Bill and I first tried this eggplant/vegetable dish — we thought it would be great with rice or orzo.  But we were very disappointed after we fixed it that way. The rice or orzo takes all the flavor of the vegetables and you can’t appreciate the vegetables themselves.  So in case you have the same idea — be forewarned.

Plans for Next Year’s Eggplants

Next year I have plans for 4 eggplant plants.  I’ll plant 2 of them in early June and 2 of them towards the end of June. (That translates to two grow bags.) When the eggplants come in, they’ll be just the amount I can handle and I can pick them the day I plant to eat them like I did this year.

Red Pepper and Eggplant – Definitely Gourmet!  (If they’re homegrown that is.)

It seems all the wonderful recipes with eggplant have red peppers.  So be sure to have plenty of peppers in your garden so you’ll have plenty to eat daily and still be able to allow many to ripen to bright red.  They are sweet and delicious and make the eggplant dishes great!

If you have trouble with flea beetles in your garden ——or if the only room you have is a deck or patio on which to grow your vegetables —- or if you have not properly prepared a space in which to garden —— why not try some eggplants, peppers or any other vegetable in a grow bag. Remember to get the good ones so you’ll have the best opportunity to be successful. It’s lot of fun.  And it’s great eating when the eggplants come in.

All grow bags are not created equal — so where ever you get yours, be sure you are getting the ones that are described as I have described them in this post.