Planting a cover crop is one of the best things you can do to help avoid depleting your soil of nutrients AND to add organic matter. My favorite cover crop to revitalize my soil is Buckwheat. It’s also one of the easiest.

Examples of How I Use Buckwheat

I’m a big onion fan as most of you know.  I grow 1500 or more onions each year which takes up 5 or 6 of my garden beds.  By the time my onion harvest is complete at the end of July or the first of August, the mulch has diminished to thin instead of thick. That results in the soil being more exposed to the elements than is good. So I reach for my buckwheat seed.

I’m usually in a hurry to get the job done.  So believe me — I don’t make a big deal out of it. When I think I’ll have the opportunity to plant a bed that’s open, I’ll put the bag of buckwheat seed in the basket I always carry with me to the garden.  Then if I get to it — I’m ready.

I sow the seed generously for good coverage and then cover with straw rather than covering with soil.  Then I wait for rain.

I also plant after potatoes are harvested. Potato beds have lots of straw on them.  After digging the potatoes, I put the straw back and sow the buckwheat right on top of the straw.  (Just so you’ll know — most instructions on planting buckwheat say to plant 1 inch deep.  I guess my seed falls down into the straw deep enough to allow it to germinate and grow just fine.)

If the entire bed hasn’t been harvested, I just sow buckwheat where I’ve completed the harvest. As I harvest more potatoes, I sow more buckwheat.

You can do the same thing after any of your spring or summer crops are finished and space becomes available.

Buckwheat must be turned under or cut within 10 days of flowering to prevent reseeding.

Buckwheat sets seed quickly.  Unless you want to be pulling up volunteers (which are easy to pull up by the way) you want to turn under the buckwheat no more than 10 days after flowering.  It sets seed very quickly and is doing so while those beautiful white flowers are blooming. 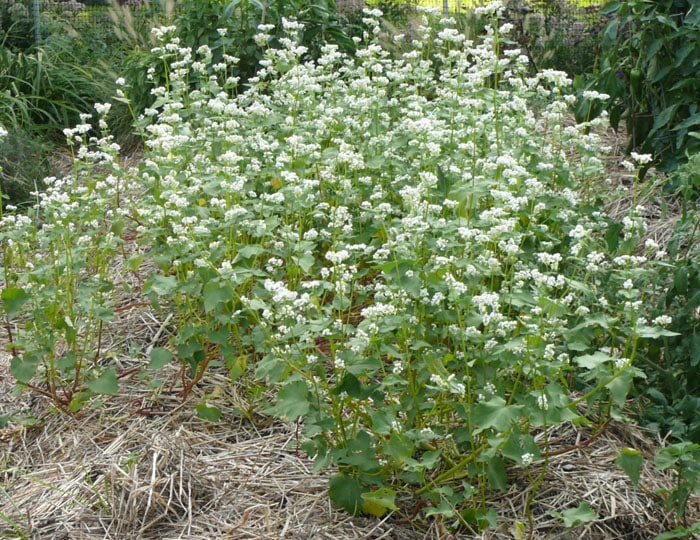 A small patch of buckwheat in my garden bed.

If you want to leave the roots in the ground longer, cut or mow the buckwheat — no more more than 10 days after flowering.

The Advantage of a Late Season Planting

If you plant about 5 or 6 weeks before the first frost, you won’t have to turn it in.  Buckwheat is frost sensitive and will be killed. After that it can remain in those beds until spring, helping your soil and protecting it from the elements and saving your straw or other mulch for another day.

Memo just for the record:
If you are growing for grain – buckwheat grain will mature the 10th to the 12th week. Then buckwheat is no longer a cover crop but a regular crop. Nutrients taken from the soil will have to be replaced as with any crop.

Buckwheat disadvantages that I know of:

If you want an easy and quick way to improve your soil’s tilth, add organic matter and nutrients for your next crop, draw beneficials to your garden, or cover your soil for winter – – – try buckwheat. I think you’ll like it.