Most of the articles that I see online about cherry tomatoes mainly say they’re good for a gardener without much space — or perfect for container gardening.  That always puzzles me because in my garden they take up just about as much ground as regular tomatoes.  Their foliage might not be quite as full, but I don’t see that as a problem – even in containers.

I grow Cherry Tomatoes for backup at the times the larger tomatoes are not giving fruit. Not to mention that they can yield hundreds of tomatoes over the season that are tasty and sometimes even more delicious than the big ones. 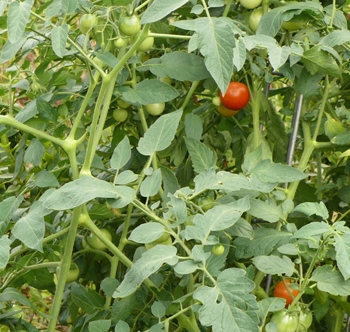 Often they’ll be the first to give me fruit — which is always welcomed after 6 months or more without tomatoes.

During the peak tomato season — I keep the cherry tomatoes harvested so the vines will continue to produce — but a lot a times I’ll end throwing them on the compost heap or turn them under in an empty bead.  That doesn’t happen a lot — but I never feel bad about it when it does because they just make more organic matter by returning to the soil.

If you’ve gardened a few years you’ve noticed that after regular tomatoes reach the peak with their first crop — you won’t get ripe tomatoes for while.  That’s the case in my garden right now. They’re making the next crop and are still heavy with fruit.  Now is one of the times that my cherry tomatoes will shine.

This morning I picked a bunch of my favorites. They volunteered from a tomato last year and I love them. They’re a little larger than a walnut (with its shell), and  are delicious and beautiful.  By the time they ripen I’ll be almost out of the bigger  tomatoes  that are in the house and will enjoy these large cherry tomatoes quartered in a salad. 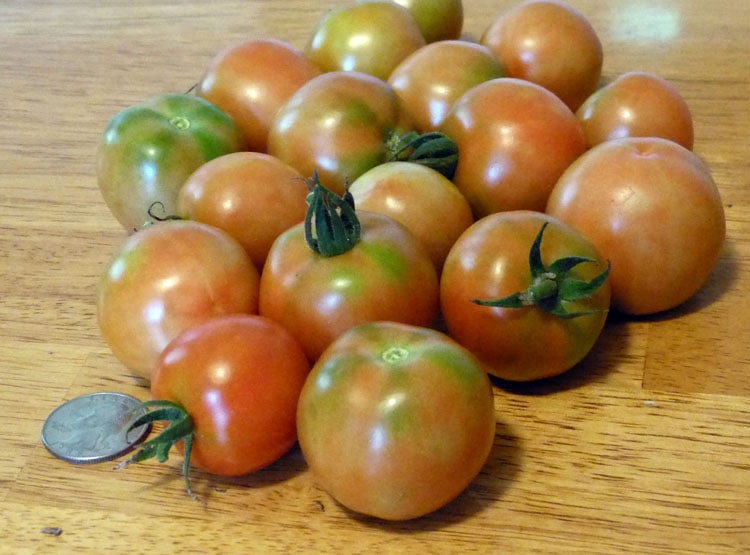 My favorite cherry tomatoes  before they are fully ripened. Harvested this morning.

I have another cherry tomato at the other end of the garden that volunteered.  The tomatoes are grape size and the skin is tough. I’m thinking about pulling it out because I don’t want to take a chance of having it reseed and keeping that characteristic.  Only thing is — it’s giving tomatoes so I’ll have to do on a day I feel brave.  And I can’t let Bill know because he would die if he knew I pulled up a tomato that was giving fruit!

Last year I had one come up in the garden that had such a tiny fruit– but the best taste in a cherry tomato that I’ve ever experienced. I never figured out where  it came from, but it was wonderful.  Foolishly, I didn’t save the seed — thinking it would volunteer the next year.  It didn’t.  Gone forever I guess.

Before a hard frost is expected I’ll harvest what remains of the regular tomatoes.  The night before the frost I’ll throw a tarp or a heavier row cover fabric over the best producing and/or my favorite cherry tomato plant.  More often than not I’ll get another month or so of production out of them. They are the bright star of the garden by then. Finally, I’ll harvest all of them.

I’ve used fresh cherry tomatoes as Hors d’oeuveres for company in the middle of January.  When they find out they’re out of my garden they’re always delighted.  It’s fun.

If you don’t already have cherry tomatoes as part of your garden repertoire, why not start some this next growing season. It might take a while to find a favorite, but there are so many good ones you really can’t go wrong.  I think the first one I ever grew was either Sweet Million or Sweet 100.  I’ve never bought seed for cherry tomatoes since then — and believe me — that was a long time ago.

Principle of Diversity – Assuring Your Success

Plan to Succeed – Plan for Backup

All content including photos is copyright by TendingMyGarden.com.  All Rights reserved.