A friend called me today. The same one who gave me one of his prized butternut squash last year. The one I told you about that can grow tomatoes and cucumbers from his southern exposure in the winter.

I was glad to have the opportunity to ask him some questions about my butternut squash. (I’m growing them for the first time this year.)  They’re in my back flower border because I didn’t have room in the garden at the beginning of the year.  They set fruit and looked so lush for quite a while, but now they’re starting to droop and the vines look like they may not last much longer. 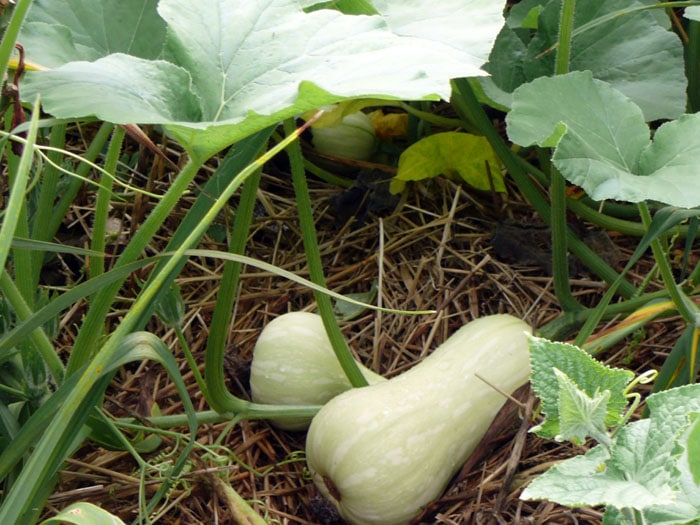 Butternut Squash growing in my flower border in July.

Organic matter makes all the difference.

I’ll interject here that the soil in the border just can’t compare to the soil in my garden.  The garden has much more organic matter and mulch.  Thus, it holds moisture much longer than my borders and doesn’t get hard like the borders eventually do.  This is especially important to me since I am not set up to water.

Since I only have so much organic material, most of it goes to the garden with what’s left going to the borders. But – when I’m desperate for a spot to plant – I turn to the borders. 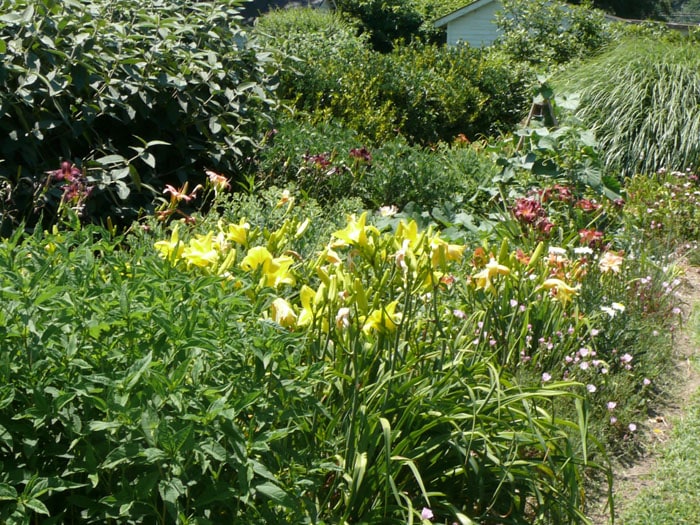 July 1st – In my back side border you can just see the leaves of the butternuts above the tallest yellow daylilies. The taller leaves that look almost the same in this picture are really cuke leaves.  The cuke is climbing on a trellis.

When are the squash ready to cut?

Most of the squash have turned tan and two are still cream color.  I don’t think there’s much chance of those two ripening on the vine.

My friend said that over the years he has found that when butternut squash are ready, the inch or so of stem extending from them will be so hard and woody that it almost takes a hacksaw to remove it! If it’s not that hard, he said, the squash will not keep properly.

As soon as I got off the phone I went out to see if mine met the criteria.  They did. You can actually see the difference in color where the stem extending from the squash is hard.  And about an inch and a half  from the squash the stem is shriveling.

The cream colored ones are delicious!

I was also happy to learn what I suspected all along — and that is – the younger ones that have not turned tan are delicious. Think I’ll pick one for dinner tomorrow to experience it first hand.

I’ve read of folks trellising butternut squash with success.  But, I found what my friend had to say about it intriguing.

He’s trellised the butternuts before.  Said it’s a lot of work and they don’t like it.  His didn’t set as much fruit that way.  When he stopped trellising, they set fruit.

And here’s the thing that swings the debate for me:  “Watch the plants,” he said.  You know how cukes will attach to anything and start climbing? Well, watch butternuts — they won’t.  They love rambling, but they won’t climb unless you make them climb.

I started more seed at the end of June and I have them growing in the garden under row covers.  Trying to give them some protection from the squash bug.  (And by the way —did you know that those lucky gardeners in Utah don’t even have squash bugs?!!)

They look good, but no blossoms yet.  I don’t know if they’ll have time to make squash or not. Depends on how long it stays nice.

Plans for the Harvest

Well, I haven’t gotten a lot of butternut squash this year, but I have some.  I plan to try the Sour Cream Butternut Squash Pie recipe that I mentioned in my post back in May.  Also want to try a butternut squash pudding and a bread recipe sent to me by a friend.

How did your butternut squash do this year?

Don, a reader in northern Illinois  recently told me (via a comment in the my previous post on butternut squash)  his vines were beautiful this year, but only produced 3 squash.

How did yours produce?  Learn anything you want to share?

All content including photographs is copyrighted by TendingMyGarden.com.  All rights reserved.