We humans are funny creatures. All kinds of great things can be going on, but let one or two negative things come along and we seem to focus all our attention on those.

It’s very easy to allow the negatives to get us down. At least unless or until we’ve trained ourselves to do otherwise. Even then — if you’re anything like me — you have to talk to yourself and remind yourself that keeping-on-keeping-on (in spite of whatever difficulties come)  is how to become successful in anything.

I received an email from a reader today. She didn’t know it of course but I was only two days removed from feeling exactly as she was feeling today.

Pat wrote, “I am a little depressed today.  I just discovered that I misidentified some bugs in the garden.

I thought I had a nice community of assassin bugs (red nymphs), but today I spotted something a little different than what I expected (in terms of the adults which developed from the nymphs).  I searched and searched the internet and finally found them.  I have leaf footed bugs!  Lots of them!

Also discovered a new batch of blister beetles in the tomato patch.

I am not sure I can nip these infestations in the bud.  They are already in full flower!!!  And maybe there are even eggs out there?  Do I yank everything up, plant cover crops, and hope for a better season next year? ” 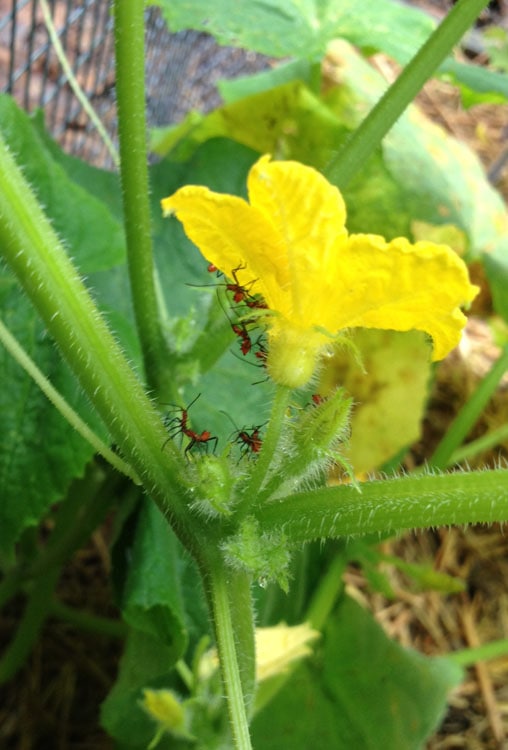 Another reader, Sheri, had sent me this picture August 29th to identify these Leaf Footed bug nymphs for her.

I had gardened 20 years before I ever saw a nymph of the leaf footed bug.  Didn’t see an adult one until sometime after that. They’re related to stink bugs and do the same type of damage to fruit as stink bugs do.

When I first saw the nymphs of leaf footed bugs in my garden years ago — I too thought they were a good bug.  I was just as upset as Pat when I found out what they were and that I had left them alive to multiply in my garden!  Rest assured after that discovery I killed everyone I found.

I’ve seen more this year than in 35 years of gardening — but even then not more than two or three dozen.  I kill them when I find them. I wouldn’t recognize their eggs if I saw them.

There are a few varieties of these beetles.  The one that frequents our property is the grey one with the white strip down the center of its back.

I kill the greatest number of these beetles on my tomato plant and potato plant foliage which they will decimate if allowed to. They gorge themselves and get fatter and fatter. (They’re said to feed on pollen and nectar, but I don’t think they find that on my potato and tomato plants.) They’re known to love alfalfa flowers which is why I plan to cut my alfalfa cover crop BEFORE it flowers.

They lay their eggs in the soil — so of course I never find them.  The larvae goes through the soil looking for and eating grasshopper egg pods.  That makes their larval stage very beneficial, since grasshoppers in numbers can do a tremendous amount of damage!  So that’s a definite plus for keeping a certain number of blister beetles around.  (Everything in nature is balance.)

Note: I’ve killed a lot of blister beetles — mainly with gloves on — but some with bare hands.  I’ve never had a bad reaction — but I’ve read that they can cause a blistering of the skin.  So gloves are a good idea just in case.  (If grazing animals like horses eat hay with dead blister beetles in it — they can die from the reaction to whatever chemical it is that this insect gives off.)

Before I tell you what I recommended Pat do, allow me to tell you dumb mistake I made several weeks ago that really made me feel awful.

I’ve mentioned before that I have the occasional tomato hornworm.  By the time I find them they are almost always already paralyzed by the laval stage of the Braconid wasp.

I seldom see the tomato fruit worm — although I do have a few from time to time especially when the conventional corn fields across the road are cut. Supposedly the Braconid wasp will prey on the fruit worm as well — but if the worm is inside the tomato — it would seem the chances of falling prey to the wasp would be slim to none.

Anyway — this year starting in mid August after the corn fields across the road were cut, the moth of the fruit worm (corn borer) attacked (laid eggs on) my tomatoes big time!   I’ve lost way over a bushel of tomatoes which translates to not as much tomato sauce for winter.

But here’s what I did that was so dumb: When I started finding the tomatoes with the tell tale holes in them — I thought it would be as in previous years — just a few.  So, I dropped the “infected” tomatoes in a pile  by each plant until I could dig them in.  I got really busy with various thing and didn’t get back to the tomatoes.

About two weeks later it dawned on me that the fruit worm goes from the tomato directly into the soil to pupate!! That means — because I didn’t check the tomatoes and kill the worms — I may now have an even greater problem next year.

For the entire day I felt like pulling up every tomato plant (but I didn’t) and even wondered what in the world I was doing gardening! So you can see that I fully related to what Pat was feeling today.

Change of Attitude and Possible Solution

After several hours of a bad attitude, I realized that a bad attitude was not going to make me successful with this problem.  What’s done is done.  I can’t change that.  I have to take a proactive approach and deal with the problem that exists — even if it was of my own making.

Once my attitude changed I thought of getting beneficial nematodes. I think they’ll work on the pupae of the worm, since they work on various grubs.  I’m guessing that the worm leaves the tomato and goes into the ground relatively close to that plant.  Based on that, I should be able to spot treat the areas around the tomatoes this fall and get rid of most of the pupae.

As I mentioned in my post of Playing with the Hand You’ve been Dealt:  It’s not the event, but our thought processes of getting mentally past the mistake or bad situation and looking for opportunities to make things better.   That’s what will shape our world and determine whether or not we’ll be successful in our endeavors.

My Reply to Pat

Pulling up everything (like Pat felt like doing and like I felt like doing) will not kill the bugs and will not be beneficial in the long term.  The bugs will still be there.

What I would do — is keep tending the plants and looking for bugs as you go about your garden chores.  When you find them — kill them. Everyone you kill this year means they won’t mate and they won’t winter over for next year.

And although our goal should not be to totally eradicate every bug (there would be nothing for the beneficials to feed on) — we need to keep the bad guys in check. Remember — nature is a great balancer  — not an eradicator. (Just in case you’re wondering — if you hand kill every bad bug you see — it’s ok.  Rest assured nature has arranged for you to miss some.)

Our two greatest weapons are:

If plants are weak — or don’t have the proper nutrients — they are like a waving dinner banner for the bad guys. If plants are healthy and strong —- they’re either not attacked —- or if they are attacked — they can withstand the attack.

When something unpleasant or bad happens start again from this point and play the hand you’ve been dealt.

Learning is not always easy.  Use each experience (good or bad) to further your education in gardening.  The only time you can’t win is if you give up.

All content including photos is copyright by Tending My Garden.com.  All Rights reserved.