If you like blueberries and you don’t have any bushes — fall is the perfect time to plant.  You’ll need a year or two for them to start really producing — so don’t waste another season.  They can be easy to grow in spite of what you read online.

A little research about what you’re buying is good thing but don’t be overwhelmed by what you read. Before you get into all that research — take a few minutes to read my story about blueberries.

Looking back, I’m sorta glad I didn’t know much about blueberries when I ordered my first two Sunshine Blue blueberry bushes about 13 or 14 years ago.

The current advertisement for Sunshine Blue blueberry bushes has a picture of one in a container. Back when I bought mine, they were advertised as dwarf bushes — 3 to 4 feet – which is why they appealed to me. (Same bush – different way of advertising.)

I put each in a different spot in the garden. One stayed small and the other quickly grew to about 3 feet tall with a 3 foot spread and gave me lots and lots of berries for several years.

Unfortunately,  I made the mistake of letting a Rudbeckia get too close to the blueberry bush. It worked it’s way into the very center of the bush and was impossible to get out.  It killed the bush.

I ordered a dozen more Sunshine Blue.  I planted them across the entire width of my garden at the lower end.  They get shade after 5PM. I lost 4.  The other 8 are still growing and giving me berries. 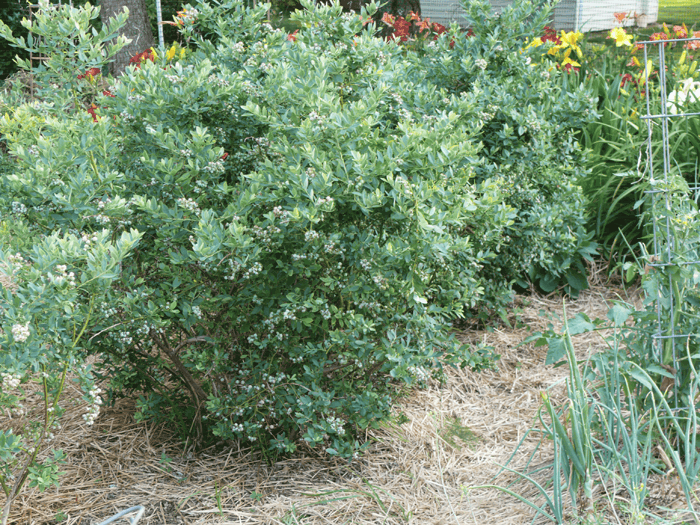 Most of the information you read online (including forums) says that blueberries prefer a ph of 5.5 and won’t grow well if they don’t get it. (Some sources say the ph should be as low as 4.09 to 5.)   My soil ph is about 6.7. My bushes are lush and large and give me fruit for almost two full months – June and July.

Blueberry bush owners on forums also say the bushes like to be watered. As regular readers know, I don’t water.

I keep the bushes mulched with straw.  If I can get pine tags — I do — and pile them around the bushes in winter. (And no — pine tags do NOT make the soil acidic.) The decaying straw, leaves and pine tags add the organic matter the bushes need to grow.  I’ve never added any kind of fertilizer.  I don’t even given them additional compost.

I never had to prune these Sunshine Blue bushes until about year 8.  And that was minimal.  Basically, I cut some dead wood out and some tips of longer branches off.

I’m sure  glad my bushes never knew all the information that’s online about them. They’ve debunked all of it in the decade plus that they’ve been in my garden.

About 3 years ago, I decided that although my bushes look great and probably will produce for another few decades, I need to have backup.

I ordered a couple of new varieties.  One was either Blueray or Bluejay – I can’t remember which.

The other was Chandler which I chose because it’s suppose to produce the  biggest blueberries. It’s also suppose to need a lot of hours at temperatures between 32 degrees and 45 degrees Fahrenheit each winter.  I figured it might not be cold enough for them here in some winters, but it will be in others — so definitely worth a try.

Their first year — severe drought.  Second year – moderate drought. Third year – drought again. The Blueray or Bluejay is looking good and producing fruit.  This coming season I’ll have to cover it to keep the birds from getting the berries.

But the most fun — the Chandler.

Last winter I thought was relatively warmer than usual.  In spite of that Chandler — still a small bush — really put out some berries.  And boy were they huge!  Bill and I really had fun with them and were like kids checking that bush everyday.

Just in case you end up needing or wanting to know:

Sunshine Blue is considered a Southern Highbush. It’s said to be self pollinating, but yield is improved with cross-pollination. Growers indicate they are good in zones 7 to 10.  Needs very little cold compared to other blueberries. (150 chill hours)

Blueray is considered a Northern Highbush. And I think Chandler is as well. Self pollinating. Is said to need  a 1,000 chill hours in winter. Usually good in zones 3 to 7.

It’s always good to do a little research before your order.  But in my opinion — the only way you’ll ever know if blueberries will do well for you is to try them.

Believe me — they’re worth a gamble!

Other Posts on Blueberries:

Blueberries – What They Need