Blueberries are just about my favorite fruit to freeze for winter use. (Blueberry pie is the best!) I have — just as a precaution for the future — added 4 new blueberry bushes this spring.

If you’re a blueberry fan like I am, my guess is – you would not want to think of being without homegrown berries to pick.

From what I see, the main thing addressed about blueberries seems to betheir love of  acid soil. Supposedly they do best in a ph of 4.5 to 5 and won’t grow in a ph above 5.5. Because of the amount of organic matter added to my soil each year,  my garden ph stays about 6.8 or 6.9.  Well — my blueberries are thriving and give me an abundance of fruit to eat and freeze each year.  They are one of the things I prize the most in my garden.

The only thing I do for them is give them lots of organic matter in the form of leaf mulch and straw in the fall and maybe prune out some dead branches.

One thing I’ve not seen anything about— although it’s gotta be out there somewhere — blueberries don’t like competition.

Here are some experiences with my bushes that I thought you might find useful sooner or later in your patch:

# 1 –  I planted my first 3 Blueberry bushes (a Dwarf called Sunshine that I ordered from Parks Seed) about 11 or 12 years ago — in my garden.  Two were never happy — and stayed very small — never giving me very many berries and finally dying.  The other bush thrived (attaining a height of 3 feet) and gave me an unbelievable amount of berries.

Perennials in my garden are on its outer perimeter.  In spite of that placement, one year I noticed a rudbeckia plant growing right next to the base of the blueberry bush which was in the middle of the garden. All efforts to pull it out failed. It seemed to be entwined in the roots of the bush and the best I could do was break it off. I kept doing this all summer.  The bush still gave me an abundance of wonderful berries.  The next spring — it was dead.

# 2 – I currently have 8 of the same kind of blueberry bushes in the garden.  Four bushes stayed very small and gave very little fruit. The other bushes are about four times bigger, 3 1/2 to 4 feet tall, and have given lots of fruit. Even though they are in a row they are divided by a center garden path. I’ve seen things do better on one side of the garden than the other so I assumed the bushes did not like being on that side of the garden.

If you’d like to get a better idea of how the bushes are planted and what they looked like last summer and this past winter of 2010 just click on this link to my post on Birds – Allies.

Two years ago arugula seeded near the 3 smaller bushes and last year it started coming up next to the base of the bushes.   They did not give anywhere near enough fruit to make them of value.   I  removed every piece of arugula starting late in the season last year.  I gave the bushes extra leaf mulch and pruned out some dead wood.

Well —–I can hardly believe it.  After at least 5 years of being stunted they have doubled in size over the winter and are loaded with berries! (Picture below.) 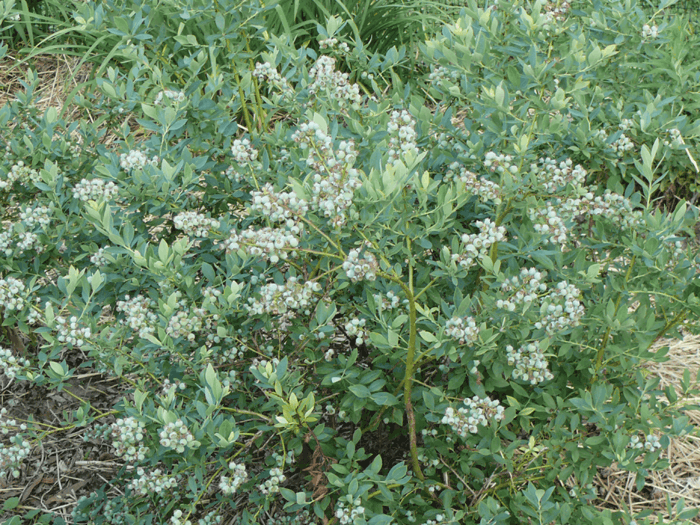 # 3 – Phlox was growing about 5 feet from the large blueberry bushes. (It’s a very bad move to EVER put phlox near a garden, much less in it!) As you know it can spread and comes up where you don’t want it. It started coming up close to one of the nicer bushes. I kept pulling it out last year — I thought.

Yesterday I noticed three thick stalks of phlox coming up at the immediate base of one of the large blueberry bushes. The roots are entwined and would not come out. Then I noticed that particular bush is not as large as the other.  (They were both the same size last year, but as you can see in the picture below the one on the right is about a foot or so shorter than the one of the left and less full.) The handwriting on the wall. 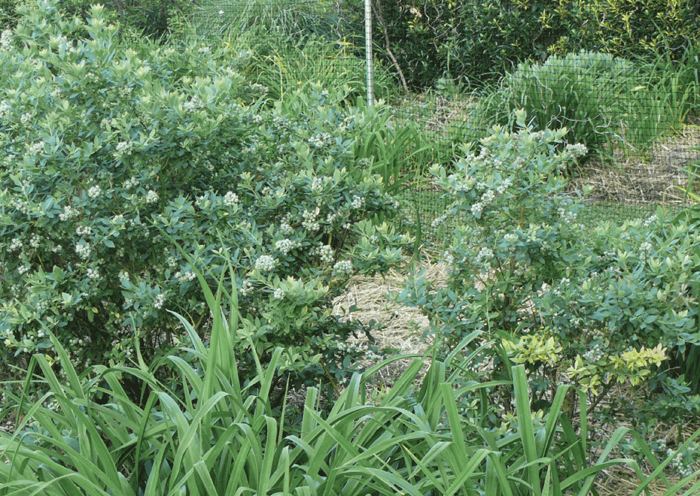 Make every effort to give your bushes all the room they need. Hopefully hearing my experiences will help make your bushes healthier and happier.  Wishing you an abundant blueberry harvest and lots of blueberry pies!